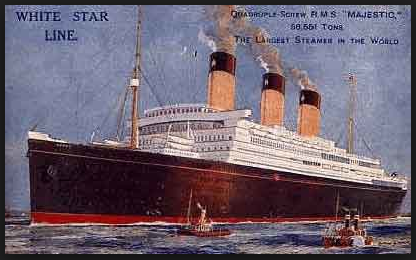 Prior to the Civil War, passports—that is, documents requesting safe passage for the bearer—were issued not only by the Department of State but also by individual states, and cities and notary publics, a situation that caused much confusion abroad. This condition was cleared up in 1856 when Congress gave the Department of State sole authority to issue passports to those desiring one, but carrying a passport for overseas travel was not a requirement.

A colorful story has it that during the reign of King Louis XIV of France, "letters of request" became popular. The King granted personally signed documents to his court favorites. The letter was dubbed passe port, literally meaning, "to pass through a port"— since most international travel was by sailing ships. Hence the term "passport."

When “designing the passport that the first United States legation in Paris would issue, Benjamin Franklin, then the minister plenipotentiary in France, resorted to imitating the existing French passport” and “printed [passports] upon his own press at his house in Passy, Paris….[An interesting aside is that Alice Hoffman also lived in Passy many years later.] They were printed on single sheets of paper large enough (some 12 inches by 18 inches) to have to be folded” These single sheet passports would be stamped or embossed at controlled border crossings as required or desired.[i]

The rising popularity of rail travel in the mid-19th century led to an explosion of tourism throughout Europe and caused a complete breakdown in the European passport and visa system. In answer to the crisis, France abolished passports and visas in 1861. Other European countries followed suit, and by 1914, passport requirements had been eliminated practically everywhere in Europe.
However, World War I brought renewed concerns for international security; passports and visas were again required, as a "temporary" measure. In the United States, a Presidential Executive Order required passports, and many European countries also instituted passport requirements at that time. The U.S. requirement remained in effect until March 3, 1921, the last day of the Wilson administration. There was no passport requirement under United States law between 1921 and 1941.
Even when passports were not officially required, some Americans requested them. Records of the Department of State show that 130,360 passports were issued between 1810 and 1873, and that 369,844 passports were issued between 1877 and 1909.[ii]

Prior to World War II, passports had a maximum duration of two years, and they were non-renewable. To maintain an active passport, individuals had to apply every two years. Even though the paperwork was only one page and less formal than today’s DS-11, at the time, this set of rules and requirements could easily be viewed as an administrative hurdle to be overcome and an impediment to applying for one.

Now that the Department of State’s records of those applications are accessible to researchers, much insight can be gained about the people and the times. Fortunately, Alice Hoffman was one of those who felt the need for a passport when on foreign travel.

The following Department of State information was pulled from ancestory.com. They applications listed represent four of the many applications she probably filed. The original forms are filled out by hand and appear to be in her handwriting.

The bold headings in the following list represent required information on each application:

Her home address and occupation change from application to application. She never really had an occupation as we might define that term, so her various responses to this question are interesting. Equally interesting are the various places she lists as home addresses. Different addresses also appear on deeds to property she purchased in Carteret County. By 1917, Alice owned property in New York City, in Paris, and on Bogue Banks. At various times, she claimed each location as home.

Her responses to questions of residence and occupation on three passport applications:

The Department of State assembled a portfolio for each passport, which included the application, supporting justification and other documents. The contents of the portfolios provide us with additional clues about Alice, her world and the times.
Words in blue are the author’s guess at handwritten text.

On August 6th, 1917, Alice Hoffman applied for a passport while in New York City. This application was made during the latter part of World War I (1914-1918), shortly after the United States joined the war effort. The application resulted in the issuance of passport  # 61527 replacing # 42915 which had a handwritten note indicating, “it was not used.” 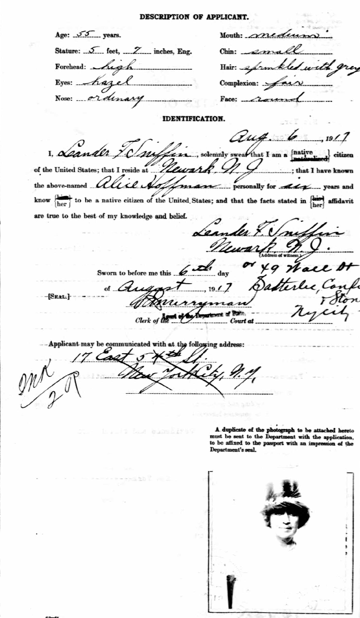 (Top of stationary)
ONE HUNDRED AND ONE PARK AVENUE NEW YORK

This is to certify that to my certain knowledge Mrs. Hoffman has for the past twenty years been a resident & householder in Paris.
Our families are connected & I have frequently been to see her at her Paris residence -29 Avenue Bois de Boulogue. – This dates before her marriage when she was Alice Green.

This affidavit confirms Alice’s residence in Paris as a single woman and provides the exact location of the property she owned at the time.

Item 2) A notarized deposition from Herbert L. Satterlee, counselor-at-law and member of the bar of the State of New York.

Slatterlee says he has known Alice Green Hoffman for 29 years and has known her father, her grandfather and other family members. He says she was born in New York, that her family and husband are American citizens, and she has never lost her citizenship. He also writes, “She is of good character and a good citizen.” He ends by writing that his firm has documentation to prove the above, but it was destroyed in a fire at the Equitable Building in January 1912.

Item 3) Handwritten note by Alice Hoffman to Wm. Phillips
(Assume he is a passport office functionary)

Dear Mr. Phillips -                                  Aug 6 1917
When I learned that my niece Mrs. Theodore Roosevelt Jr. was going to Paris for the purpose of doing work for the Y.M.C.A. I offered her my house (which has been open during the war, in fact for the last twenty-two years) to use in any way that she chose at my expense. [her underline] I received a cable, shortly after having given orders to my housekeeper to prepare for Mrs. Roosevelt, that it would be impossible owing to the shortage of fuel & food. I repeated my instructions by cable & shipped the principal supplies enough to last six months – My reason for going to Paris is to take charge of all these necessary details & leave Mrs. Roosevelt free to devote her time to her work, in which I shall endeavor to help her as well.
I am accustomed to dealing with & overcoming difficulties. I think it desirable that I should be there.
Yours very truly
Alice Hoffman

Alice’s note confirms she left Paris when World War I broke out. It also may help support the assumption that the war was a factor in her decision to buy property in an area as remote as Bogue Banks. We have no evidence she used a passport to return to France during the war.
The note does, however, definitely show how close Alice was to her niece, Eleanor, Mrs. Theodore Roosevelt, Jr., and the interest Alice had in helping to support her. Alice’s words help us understand why Eleanor’s children would become heirs to the Bogue Banks property.

Alice also gives us a sense of Eleanor’s character. Eleanor followed her husband, who had enlisted, to France and was doing working for the YMCA in Paris. We know from other sources that, during World War I, Eleanor, was running canteens, clubs, and leave centers for soldiers as well as teaching French. She also designed uniforms worn by women workers in the YMCA. See endnote [iii] - a 25 second video of Mrs. Roosevelt entertaining women YMCA workers in the garden of the home of her aunt, Mrs. Alice Green Hoffman, in Paris.
The 1920 Portfolio 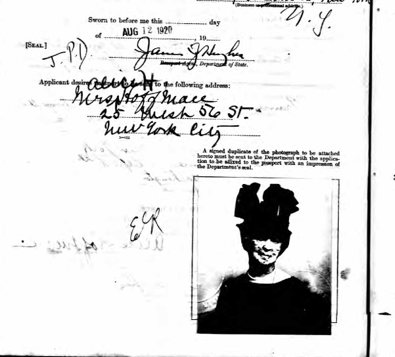 Item 1) A notarized deposition from Herbert L. Satterlee, counselor-at-law and member of the bar of the State of New York.

As others in previous depositions, he claims he knew the family well for many years and could attest to her character. He says she resided in the town of Brick Church, New Jersey, with her father, during her minority, except at such times as she was at boarding school at Farmington Conn. He also says “the applicant intermarried with J. Ellis Hoffman, an American citizen in Paris France upwards of fifteen years ago.”

This deposition helps confirm that Alice lived in New Jersey for a short time, and that she went to Miss Porter’s School for Girls, which was in Farmington, CT, and was married in Paris around 1905.

“The above passenger is sailing on our Special Voyage De Luxe to the Mediterranean per SS Adriatic sailing Jan 7 1922, and is a bonafide member of the cruise.”

Alice was quite the world traveler while she owned property on Bogue Banks. 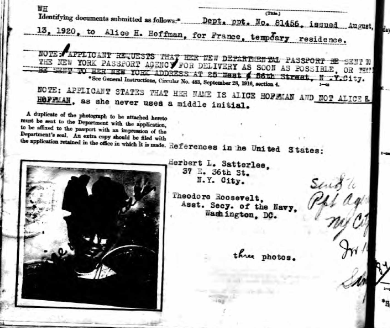 Applied for at the American Passport Department at Paris, France, signed by the American Vice-Consul. A handwritten note indicates the application was placed in “the diplomatic Pouch for NY on 10/7/22.”

It requests a passport for use in the following countries France, British Isles, Italy, Switzerland, Austria, Hungary, Czechoslovakia and Algeria.
Note on form: “Applicant states that her name is Alice Hoffman and not Alice H. Hoffman, as she never uses a middle initial."

In spite of the strong declarative statement, the question of a middle name remains unresolved. Middle names were common for the time and her social class. Alice’s sister Mary Butler Green had a documented middle name, but to date, nothing has surfaced indicating a given middle name for Alice or her sister Grace.

Also note the comment on the application that a reference from “Theodore Roosevelt, Asst. Secy. of the Navy,” is on file in Washington.

Alice Hoffman's passports and other travel documents provide many clues about her in addition to her intended travel itinerary. Additional information is being gathered from US Customs Department Arriving Passenger lists, and when organized will be presented in a future post.

[i] The Passport, Martin Lloyd
https://www.archivists.org/periodicals/aa_v68/review-baudoin-aa68_2.asp

[ii] The history of US passports was compiled from
http://en.wikipedia.org/wiki/United_States_passport
http://www.archives.gov/research/passport/index.html
http://www.ppt.gc.ca/pptc/hist.aspx?lang=eng
http://travel.state.gov/content/passports/english/passports/new.html
[iii]Views of Mrs. Roosevelt entertaining women YMCA workers in the garden of the home of her aunt, Mrs. Alice Green Hoffman, in Paris. There are medium close shots of Mrs. Roosevelt, the woman not wearing a hat, as she stands among a group of women. (Library of Congress – Early Motion Picture collection)
http://www.loc.gov/item/mp76000226/
http://memory.loc.gov/cgi-bin/query/h?ammem/papr:@field(NUMBER+@band(trmp+4088))
Newer Post Older Post Home