Alice’s Last Will and Sad Testament

Alice Hoffman has left us many documents, including a 200+ page unpublished autobiography, stacks of ledgers and budgets, shopping lists, remodeling blueprints, inventories of her possessions, letters, legal papers and, finally, a Last Will and Testament.[i] Unlike most modern-day wills, Alice’s is more typical of an earlier age when writing a will was a final opportunity to right perceived wrongs. Hers went through several revisions.

It seems Alice began writing her final will, the version that has been preserved by her attorney Frank Wooten of Greenville, North Carolina, about five years before her death. It’s dated February 21, 1948. She was 86 years old.

The will has 15 numbered subsections and six codicils, revisions that took place over a three-year period. The last one is dated June 6, 1951, less than two years before her death.

The very first two sentences of the first section reveal her state of mind, her obsessive sense that she has been a victim of injustice. They also suggest her financial state of indebtedness. She says: “I hereby revoke all former wills by me made and direct the payment of my just debts and funeral expenses. I use the word just advisedly, for none of the debts which have been collected through litigation have been owed by me.”

The second section reveals three other obsessions—returning to France, reclaiming her Chateau des Landes property in Suresnes and identifying herself with those who fought in France during World War I. It had been over 15 years since Alice had been in France, but she imagines the possibility that she might be buried there in the American Veterans Cemetery. She was, of course, not a veteran. 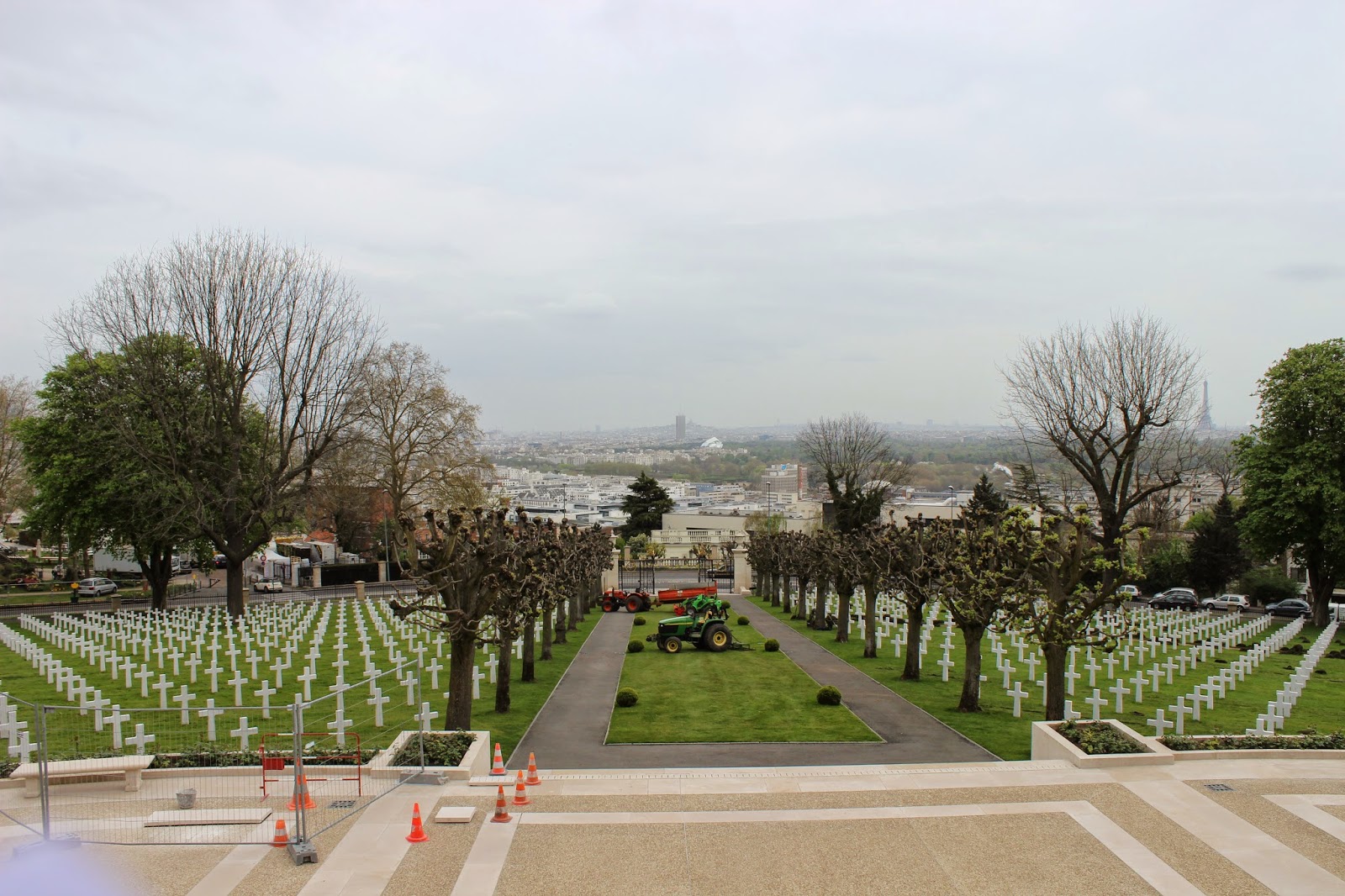 The view of Paris from the Chapel at the American Cemetery in Suresnes, the Eiffel Tower to the right in background. Alice's Suresnes property was near this cemetery. [ii]

This delusional train of thought continues. She cannot seem to control herself from recounting all the events that led to the French government’s acquisition of her property. The story began when the leftist Front Populaire governed France and claimed the French version of eminent domain to create a public park on her estate in Suresnes—and a beautiful location it was. She says that the Chateau des Landes’ “park contained four hectares, as well as an uninterrupted view of the Bois de Boulogne, Montmartre, the Eiffel Tower.” Her legal battle over these four hectares (approximately ten acres) and an additional adjoining one hectare continued with three subsequent French governments—the right-wing, pro-German Vichy Government; the post-war French Provisional Government; and, finally, the Fourth Republic, which was in power at the time she was writing this will. Actually, all evidence suggests the legal battle had been lost long before.

Alice, according to her own financial accounts, accepted a settlement payment for about $80,000 for property she bought for about $20,000. She, of course,  remodeled at a cost of about $20,000, but claims that the estate was worth $160,000. She has no chance of reclaiming her Suresnes property. That fact does not, however, keep her from willing that one of her French lawyers Maitre J.J. Retouret build a house for his family on the land and that “Eugene Millington-Drake and his sister,” Jessie, whom she identifies as “my very dear friends,” inherit the Chateau des Landes estate.

With her mind still very much in France, she begins to think about all the personal property she left behind, some dating back to the house she rented for 27 years on the Avenue du Bois de Boulogne. She thinks of her precious jewelry, some diamond pieces, a “cabachon emerald pendant, my wedding present from Ellis, and various other precious family stones”; her silver, stored in “an old sea captain’s chest”; her wine from various cellars around Paris; furniture stored in a Paris garage, which she say “is stuffed to bursting.” 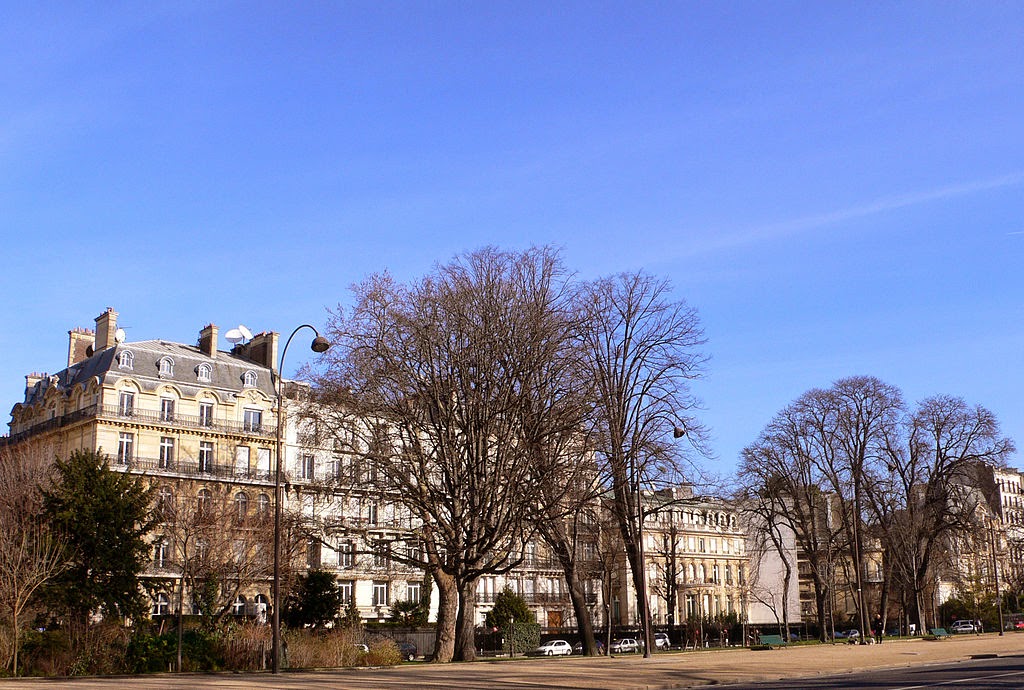 This modern photo by Henry Lawford suggests the neighborhood of the Avenue du Bois de Boulogne Alice is imagining as she writes this part of her will. [iii]

But, again this is property she no longer has. She used part of the $80,000 she received for her Suresnes property to pay Boris Lepkowski to take her Bois de Boulogne treasures out of the Credit Municipal in Paris and secure them at his Paris home. Fearing a German invasion, he left Paris and brought some of her jewels with him to Monte Carlo. She also had paid him to remove wine from her wine cellar and store it in his Paris cellar. All she has from him are receipts—no real assets to give to heirs.

As for larger furnishings Alice was paying hefty storage fees over a period of many years in New York and Paris, but as her debts grew and she was unable to continue paying fees, storage facilities sold her possessions to recoup losses. 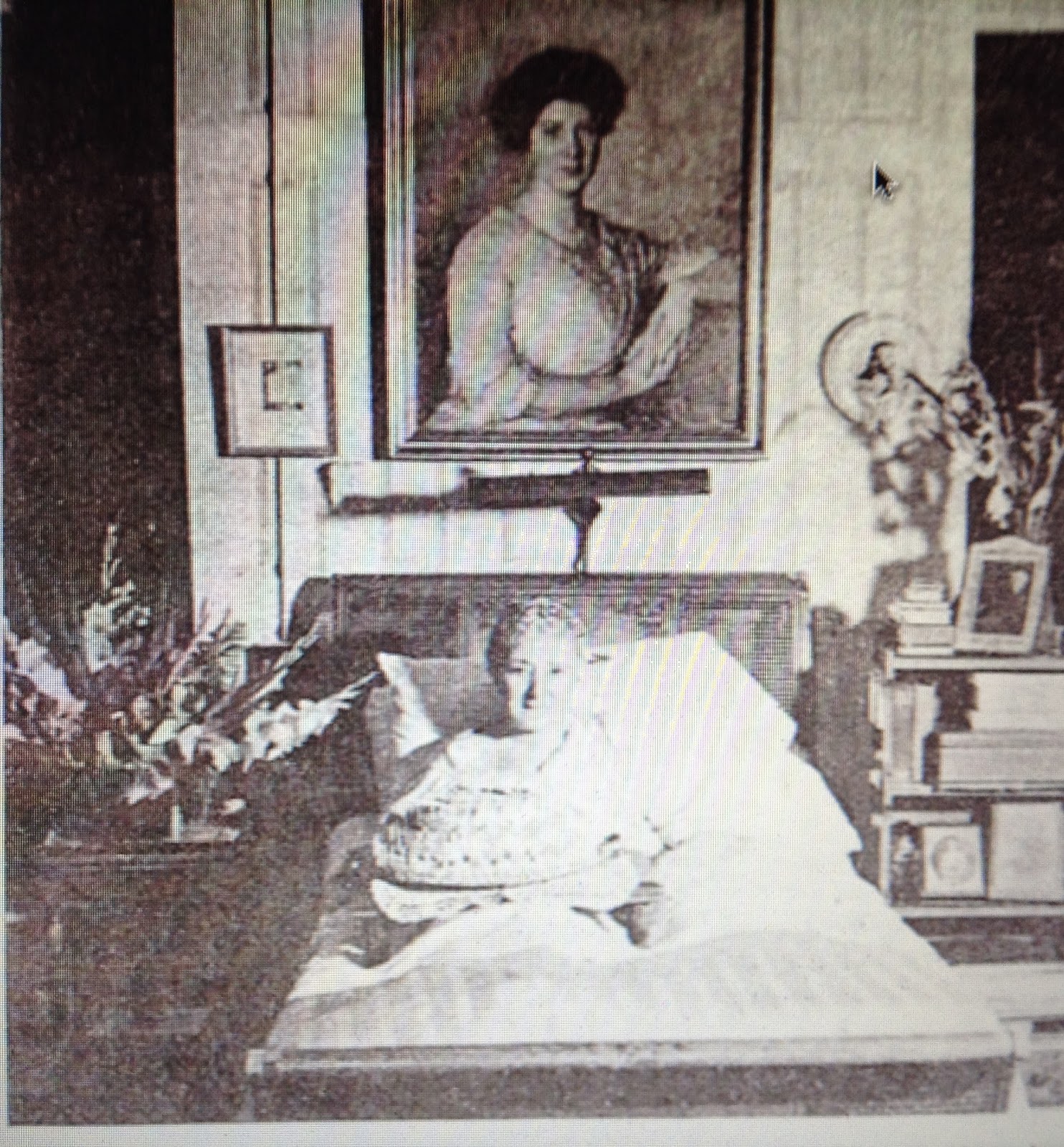 Alice Hoffman in her Bogue Banks bedroom, the portrait of her goddaughter Mrs. Frank Stephens above her bed. [iv]

More realistically, in the fourth section, she wills the portrait above her bed of Mrs. Frank Stephens to the artist and gives Mrs. Stephens’ copy of Daily Strength for Daily Needs, which Alice seems to rely on heavily, to the Stephens’ daughter-in-law.

In the fifth through the ninth sections, she turns to people she feels she owes a debt of gratitude. Most seem to be people who have over the years been in her employ, and some she is still counting on to assist her. These include her former secretary Lillian Wilson; Gabrielle Germaine Brard, her current companion, whom she refers to as her “Stand In”; Lawrence and Lela Sadler as long as they continue in her service; a banker and financial advisor Elbert J. Knowles; employee Ira Guthrie as long as he remains in her service; and four others who may also be former employees—Miss G. Kaye and Nina Marinel of Washington, DC; Miss J. N. Norse of New York City; and Augusta Girardin in France. She wills them all small amounts, except for Gabrielle, who gets a more sizeable allotment and some optional payout methods. 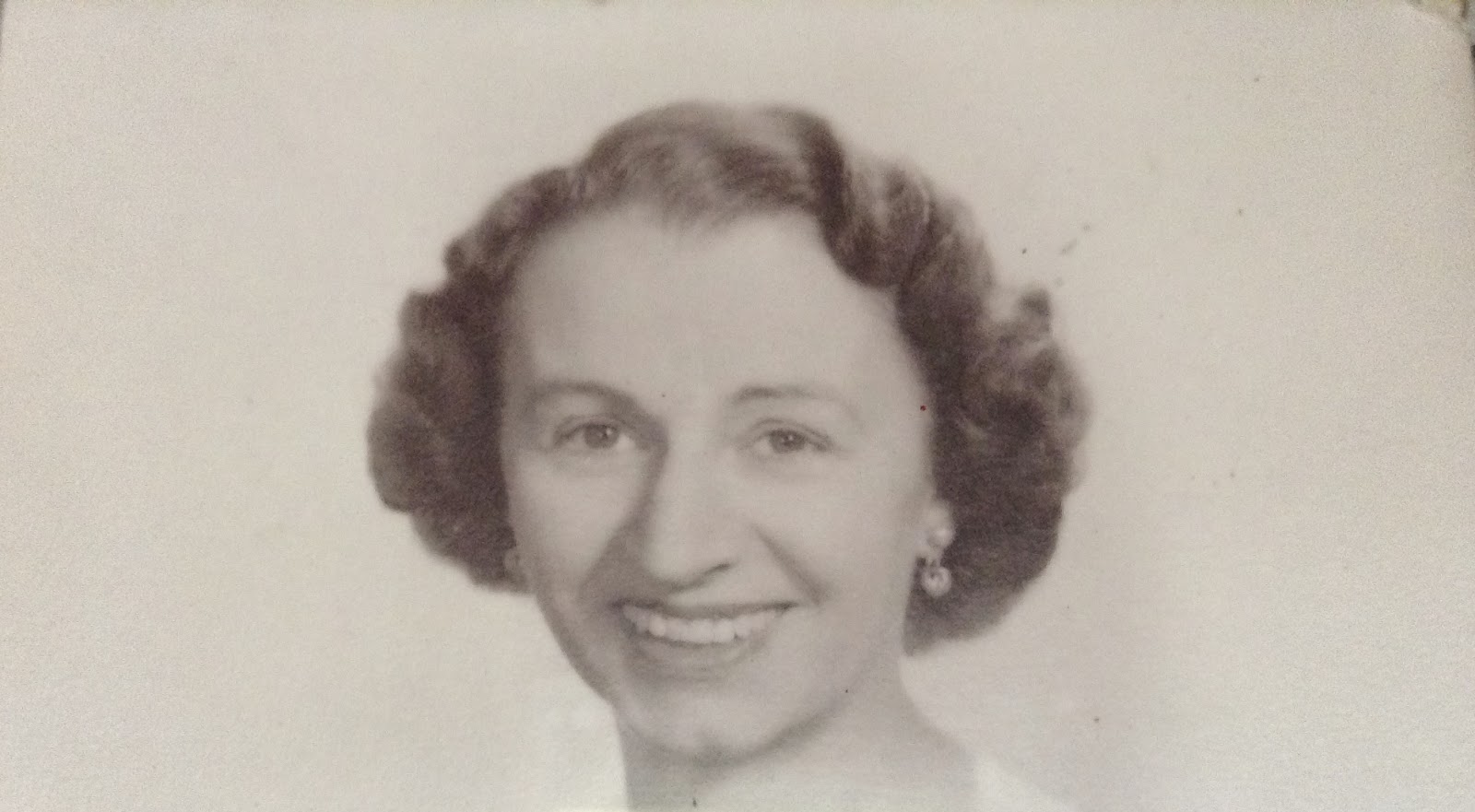 Gabrielle Germaine Brard, From photo on wall at Crab Shack in Salter Path

In section eleven, she lists what she wants to give to two charities: $2,000 to the Morehead City Hospital for the primary purpose of treating children with infantile paralysis and $500 to Father Flanagan’s Boys Home.

She wills to her niece, Eleanor Butler Roosevelt, “the residue and remainder of my property, both real and personal, of every kind and wherever situated.” She includes her jewels, silverware, paintings and antiques.

She also gives Eleanor authority to distribute these assets as she sees fit, especially among her children and appoints her executrix. In the second codicil, she changes that appointment: “I hereby nominate, constitute and appoint by grand-nephew, Theodore Roosevelt, III, and my attorney and friend, Frank M. Wooten, Jr., as executors….” She explains the change as follows: “…because my niece, Eleanor Butler Roosevelt is a resident of the State of New York and because of the distance from North Carolina, it would be an undue strain upon her health and would require a great deal of her time, which is already used to capacity in many worthwhile projects in New York….” The explanation may also suggest Eleanor’s feelings toward her aunt.

The remainder of Alice’s will, including the remaining five codicils, reveals her final obsession—her nagging sense that she has little money and few assets to distribute to people she would like to be able to acknowledge or thank for taking care of her.

She says in the first codicil, “I have provided for my great niece and nephews, the children of Eleanor Roosevelt, by a trust which is held by the Wachovia Bank & Trust Company. It is my will and desire that they have this as is provided in the trust agreement dated February 21, 1948. The source of the principal of this trust is the estate of my grandfather, Theron R. Butler, and I have provided in the said trust that it continue as long as permitted by law. This provision is made in the belief that the principal of my grandfather’s estate should continue intact as long as possible.”

Even though she knows the trust has to remain intact, she also knows she has debts and taxes to pay. Sadly, we see her struggling with these financial realities as she reassesses how much she can give various people.