The Town of Pine Knoll Shores was chartered by the state General Assembly in 1973. Before it was chartered, many actions and events occurred that set the stage for the community we have today. Prior to being a town, the land was under stewardship of members of the Roosevelt family, and before them, Alice Hoffman, and before her, John Royall. Before Royall, several others claimed it. In colonial times, the Lords Proprietors ruled, and, before them, it was the land of native peoples. They all had one trait in common: they left the land essentially untouched. That all changed starting in the 1940s, when two significant events occurred that shaped development of Bogue Banks.

In 1944, as a result of financial difficulties and legal actions, the estate of Alice Hoffman was put in trust for the children of Eleanor and Ted Roosevelt, who was President Theodore Roosevelt’s son. Members of the Trust were Theodore Roosevelt (sometimes referred to as TR III); his sister, Grace; his brothers, Cornelius and Quentin. This action by the courts established the Roosevelts as the sole owners of the Alice Hoffman property on Bogue Banks. She was granted the right to live in her home for the remainder of her life. Justice John Marshall Matthias, one of Alice’s Ohio relatives who was an attorney and judge in the Columbus Municipal Court, helped set up the trust and was a key player in actions that led up to the 1944 court action. 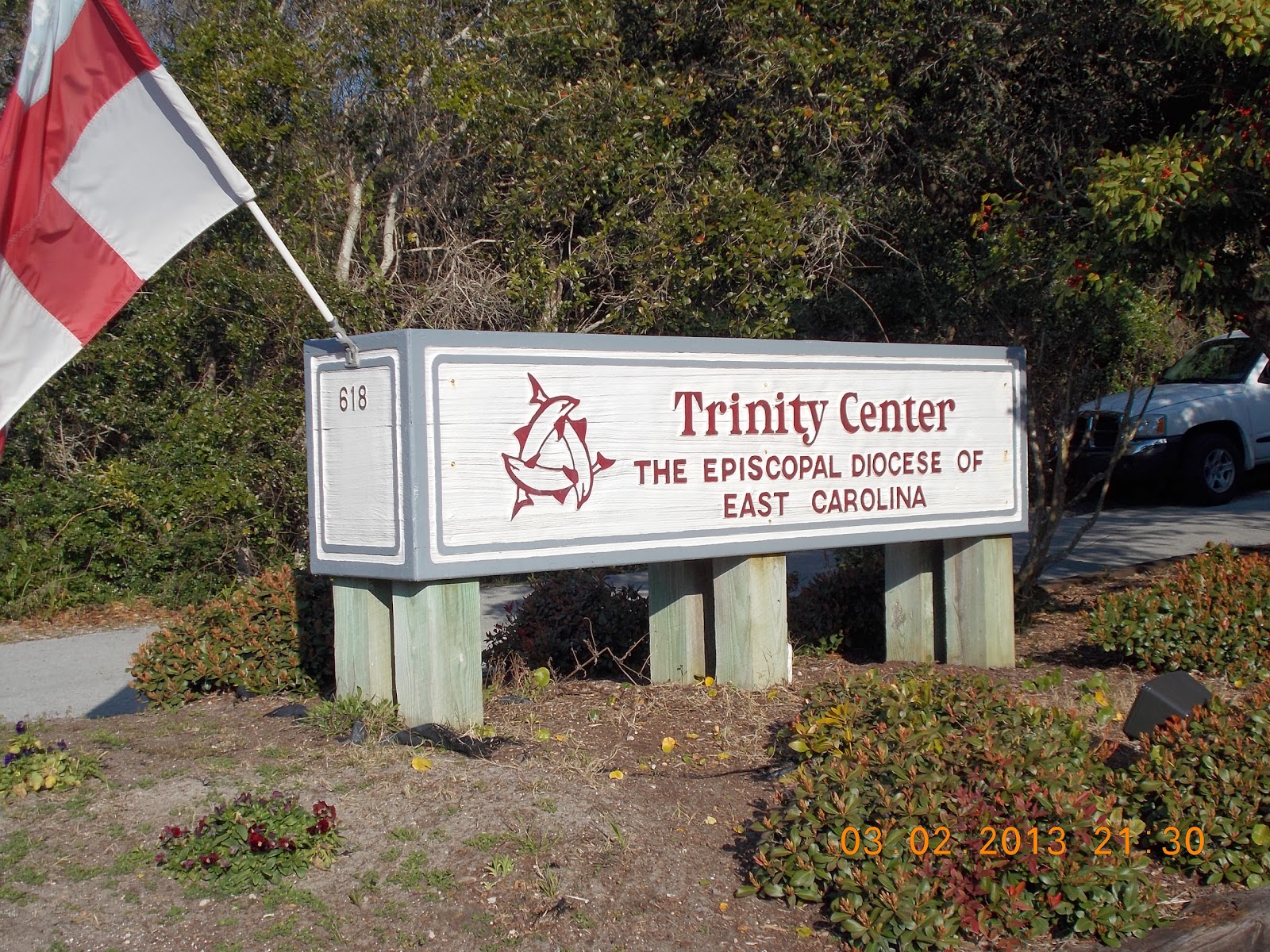 On February 25, 1949, Frank M. Wooten, Jr., acting as attorney of record, wrote a deed for Alice Hoffman, the Roosevelts and John Marshall Matthias to donate property to the Diocese of East Carolina of the Episcopal Church. This property, comprising 62 acres, became Trinity Center.

Development activities were of a haphazard or random nature in the 1950s and eventually took on a more organized approach as the 1960s progressed. In 1951, Rivers and Associates Consulting Engineers of Greenville, North Carolina, a firm in business since 1918[i], was engaged to map a small subdivision on the western portion of the property, adjacent to the community of Salter Path. This Greenville firm was probably brought onboard through the recommendation of Alice’s legal advisor Frank Wooten, whose office was in Greenville. The property was called and still is called Hoffman Beach. On the recorded plot of the subdivision, it is referred to as “Hoffman Beach, Property of Mrs. Hoffman,” even though by the 1950s the Roosevelt Trust controlled the land. The first lot in this subdivision was sold in June 1951.The deed included a one-page list of covenants and restrictions. Establishment of a homeowner association was not included. Hoffman Beach remains an unincorporated entity apart from Pine Knoll Shores and Salter Path. 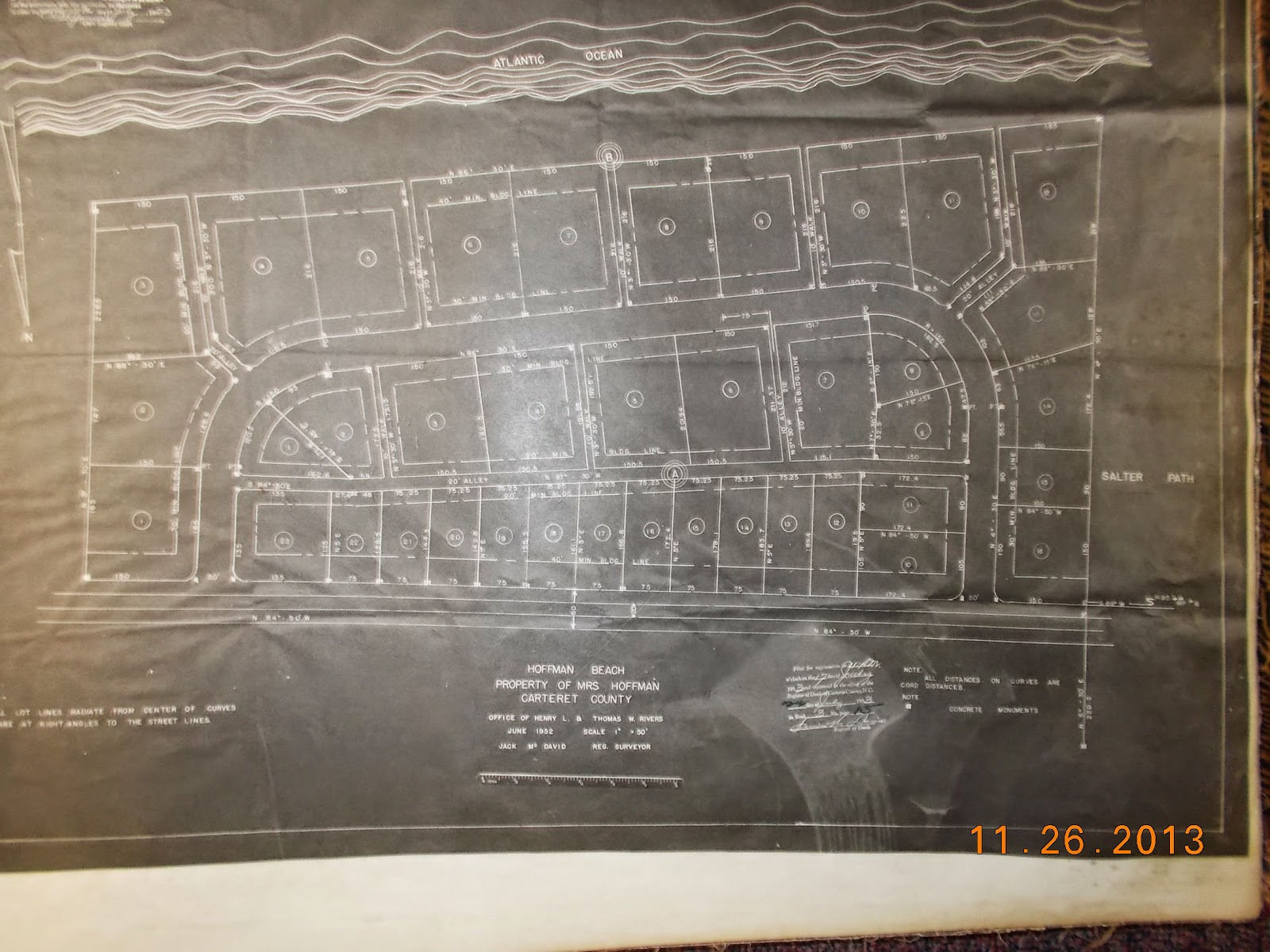 After Alice Hoffman died in 1953, Rivers & Associates was again engaged by the Roosevelts to map a subdivision near the eastern portion of her property. It is on this map by Rivers and Associates that name Pine Knoll Shores first appears. Research to date has not revealed the derivation of the name. John Royal called the land "Isle of Pines". Alice Hoffman referred to her home as "Shore House", and, for a time, called her business "Pine Grove Farms." Perhaps, these were in the mind of the originator. In the July 1973 issue of the Shoreline, Pete Rempe, then living in El Paso, Texas sent a letter to the editor saying, "Pine knoll Shores has always been close to my heart as I arranged the first meeting with the Roosevelts in my office at 90 Broad St N.Y.C. when I was with Stone and Webster. I am the guy who thought up the name Pine Knoll Shores and am delighted that the whole plan out so successfully." The meeting referred to most likely took place in 1954. Pete Rempe's enthusiasm for Pine Knoll Shores was demonstrated by his purchase of one of the first lots put on the market in 1957, on the corner of Pinewood and Salter Path Roads.

Also during the early 1950s, George McNeill, a Morehead City resident, became attorney-in-fact for the Roosevelt family and would remain in that role through the 1970s.
By the late 50s, lots were being sold on Salter Path Road and on new streets running north and south: Cedar, Holly, Willow, Yaupon, Juniper and Oakleaf on the sound side; Pinewood and Knollwood on the ocean side. These streets were the original Pine Knoll Shores. Later, this area would be casually referred to as “Old PKS” and was mapped by Donald E. Vickstrom of Rivers & Associates in March 1957. In May 1957, the “General Plan of Subdivision” was filed at the Recorder of Deeds Office (Book 174, Page 643).

Our research to date has not revealed why that particular ¼ mile of the eight miles the Roosevelts owned was chosen to develop first.

This is an aerial view from 1964. Found in a report by Simon Baker, Aerial Photography for Planning and Development in Eastern North Carolina (Raleigh 1976). The white strips on the right are development activity outside the Roosevelt property limits. The north-south roads further to the left are the roads developed in the late 50s.

The 1953 and 1964 aerial photos show the same stretch of land. The cleared area on the 1953 photo was used by Alice Hoffman to raise produce and livestock. Her house was to the left. The straight line extending from Salter Path Road is a roadway leading to her house. Perhaps the cleared area and existing roadway had something to do with the development decision.

The first lots were sold in July 1957. The first buyers in this original plot of PKS were Mr. & Mrs. Wade Cooper (block E, lot 3), Mr. & Mrs. Peter Rempe (block F, lot 10) and Mr. & Mrs. Warner Wells (block W, lot 16). The local real estate representative of the Roosevelt Trust at this time was Fred Clarkson of Morehead City. Shelby Freeman, also of Morehead City, sold lots to interested buyers. One of Shelby Freeman’s buyers was A.C. Hall, who purchased 300’ of oceanfront in July 1959 and built the Atlantis Lodge, the town’s first motel; he would become a key planner for the next phase of development. Shelby Freeman also purchased 300’ of oceanfront in March 1959, on which he later built the Iron Steamer complex, which is no longer in existence.

The “General Plan of Subdivision.” mentioned above, included the Vickstrom map and restrictive covenants. The covenants did not include any mention of a homeowner association or membership therein—an omission that complicated the Roosevelts’ development strategy for years to come.

The concept of homeowner associations (HOA) was taking shape nationwide in the early 1960s. HOAs allow localized preferences in community living and are an overlay to municipal government. They operate like businesses and, as such, are corporations with geographical limits. They are essentially private governments and have unique differences when compared to municipalities, which are public. In HOAs, each property is entitled to a vote, regardless of where the owners live, whereas, in municipal governments, legally registered residents vote, whether they own or rent, one vote per person. By 2010, this concept of private government had taken hold throughout the nation, and there were over 300,000 such associations.[ii] The activity level of HOAs varies significantly, here and throughout the nation. Some take on major responsibilities and others little. In spite of the widespread acceptance of HOAs, there is no statistical database for HOAs; they are not part of the census records or any federal, state or county statistical records.

In the mid 1960s, Ted Hearth from Stone & Webster started to stay at the Atlantis Lodge and got to know A.C. Hall, who was not only the owner of the Atlantis but also a city planner from Raleigh. Hearth recruited A.C. Hall to develop a series of broad conceptual plans for the entire property and detail development layout for the central section of Pine Knoll Shores, which was legally called Pine Knoll Shores Extension, Sections I through V.

By the mid 1960s, the Roosevelts have been in possession of the land for 20 years, some limited development has begun and some parcels have been sold off. A professional development team has been assembled, and significant development is about to get underway.

See “Homeowner Associations: Part I” for more of the story.