We know a good deal about Alice’s living quarters on Bogue Banks, but information about what she called the Teahouse is sparser. What we do know makes the history of this wooden beach structure worthy of attention and raises additional questions. 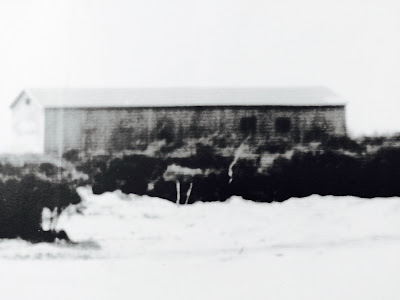 In her autobiography, Alice Hoffman makes several references to a Teahouse built on the oceanfront by the man who would sell her a stretch of his Isle of Pines property, John Royall. In describing her first positive impressions of Bogue Banks in her unpublished autobiography, she says, “...and best of all an enchanting ‘Teahouse’ perched on top of one of the highest dunes and visible from end to end of the beach, standing sentinel either of welcome or the opposite, as the case might be.” The rectangular, weatherworn, wooden structure in the above photo looks much less enchanting, but, around 1915, it may have been quite a nice beach refuge in the wilds of Bogue Banks. It was relatively new when she first saw it.

Some think the “Teahouse” in the above picture was not the original built by John Royall and used by Alice Hoffman, but a more primitive structure built later by locals from Salter Path. The reasoning is the original must have been much grander and was washed away by a hurricane in the 1930s. I have found no evidence to support this view except that no structure on the beach is visible in 1939 aerial photos. Seeing through dense maritime forest in those photos is difficult, and wood siding of a 25-year-old structure would be weatherworn and covered with mold, camouflaging it. Also, Alice Hoffman, someone who described her remodeled house in great detail, never describes the architecture of the Teahouse, leading to the conclusion the original structure was remarkable for its location and not its style.

We know from a summary of a 1964 Carteret County court deposition by Capt. George Smith, who had built the physician’s house Alice first rented and then bought from John Royall, that Capt. Smith brought construction materials from Morehead City in his boat and “helped John Royall build the tea house on the beach.” The physician’s house he built was small and pretty basic because Alice required additions before she rented it and continued to remodel and add onto it when she lived there. So, likely, the teahouse was built in a similar simple fashion.

From Alice’s various descriptions of walks, we learn that from her house on the sound over to the location of the teahouse on the beach was about 1½ to 2 miles. The path would not have been a straight one.

In a 1913 article in the Potsdam Courier, Martin V.B. Ives, from New York, describes a visit with the Royall family on Bogue Banks. His description includes a walk to this spot and reveals more information about the location. Ives says:

After an elaborate luncheon had been negotiated we were invited to take a walk across the island to the seashore, which we eagerly accepted.... Mr. Royal had caused to be cut out and cleared up foot trails for miles around his camp, one of which was kite shaped in form, over to the beach one mile, up the beach one mile and back to camp one mile.
He goes on to exclaim:
... when we had arrived and climbed the great sand dunes, like breastworks guarding the seashore, and looked out onto old ocean’s broad expanse as far as the eye could reach in either direction, and viewed its hard white shell-covered and wave-washed sand beach, and had braced up and breathed in old ocean’s nectar of the Gods in great doses, I am prepared to say that as a lover of nature and woodman, I have never seen a more heart-lifting, getting-next-to-nature, making a man open his lungs to drink in deep draughts of health-giving ozone with the flavor of the pine, and “thank-God I was alive” place than the ocean beach opposite Mr. Royal’s place on Bogue Island.[i]

The absence of any mention of a teahouse in the 1913 article suggests Royall either had not yet built it or it was unremarkable. Most likely, it was built some time between 1913 and 1915.

Over the years, hurricanes and nor’easters caused considerable erosion, but from Ives’s and Alice’s descriptions, we place the Teahouse somewhere between Pine Knoll Townes and Hammer Park, which is still today high dune and affords the best view.

The concept of the teahouse comes from Asia where tea originated. Once tea made its way to England, tearooms became popular, but the term teahouse was not commonly used in England. Teahouses in most Asian cultures were not only places to drink tea and hold tea ceremonies but also places to entertain, socialize, even meditate. They were retreats, especially for men. 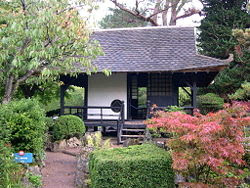 Not all Teahouses were this elegant, especially in the U.S. Consider the one from Guilford, Maine, c. 1920, in the vintage postcard below.[iii] 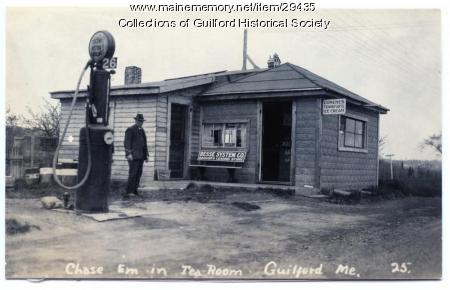 Royall was a New Englander of means, who may have gone to the Orient or, perhaps, was aware of the 1915 Panama-Pacific International Exposition, which featured Japanese and Formosan teahouses. The idea of building a beachfront retreat to have a place to sit and relax that would provide shelter from the wind and sun on a high dune makes good sense. The decision to call it a “Teahouse,” suggests he and, perhaps, his family had heard of or been to one elsewhere. Or, maybe, he knew of New England equivalents such as the one above or the one in Maine's Acadia National Park described as follows:

The trail begins at the far end of Sand Beach with granite steps. A right at the top of the steps leads to an open ledge ascent that provides excellent views of Sand Beach and The Beehive. The trail continues along the headland with dramatic views of the coastline and ocean. The trail is rocky with uneven footing. Good foot wear is recommended. It is a gradual grade to reach the highest point at 145 feet above sea level. At this point the ruins of a 1915 tea house can be seen.[iv]

If you substitute dunes for rocks, the above description almost fits the location John Royall chose for his Teahouse.

We have plenty of evidence of its existence. During Alice’s first winter on Bogue Banks, her good friend Edna Ryle came for a visit, and Alice describes one lovely day on the beach at the Tea House: “The day she arrived the weather was the counterpart of Nice, brilliant blue sky and marvelous blue sea.” Edna fell “ sound asleep on one of the divans of the Tea House, on the Beach.” This, unfortunately, was the last of good-weather days during Edna’s visit. (Note variant spelling of “Teahouse,” probably the result of various secretaries typing Alice’s story. I have chosen to use the spelling most often used in her autobiography.)

When Alice’s sister Mary visited, the walk to the Teahouse was not pleasant. Already suffering from some respiratory illness, Mary got overheated while walking, and “...a breeze on the verandah of the Teahouse added to her cold.” Then Alice says, “On the way back we ran across one of the wild boars which roam at will on the island.” Even though John Royall had cleared paths, this would have been a walk through dense forest and undergrowth.

Other historical evidence that Alice had an oceanfront Teahouse comes from several sources. For example, a piece by Laura Duncan Davis Piner on her grandfather Sterling Price Hancock (1861-1926) has the following account:  “He often hunted on the Hoffman estate and stayed at the “tea house” on the ocean side.” But, she goes on to say something we doubt is true: “This site was renowned for the lovely rose gardens amidst the sand. ” [v] IIn fact, Alice’s roses were in terraced gardens she had designed around her house on the sound. There is no other mention I could find of roses on the oceanfront.

We assume as Alice grew older, the Teahouse was abandoned. By the time she settled here permanently in the late 1930s, she was quite crippled and needed crutches to walk.

In the 1940s, evidence suggests village fishermen used it. In a conversation at Willis Seafood in Salter Path, I learned the locals had oceanfront fishing camps with one named Red Bird, another Blue Bird and another down the beach closer to Alice’s house, called the Teahouse. The other two were tents, but the teahouse was a wooden structure. The men would camp out when the fish were running, and the women would go there to cook and wash the men’s clothes. 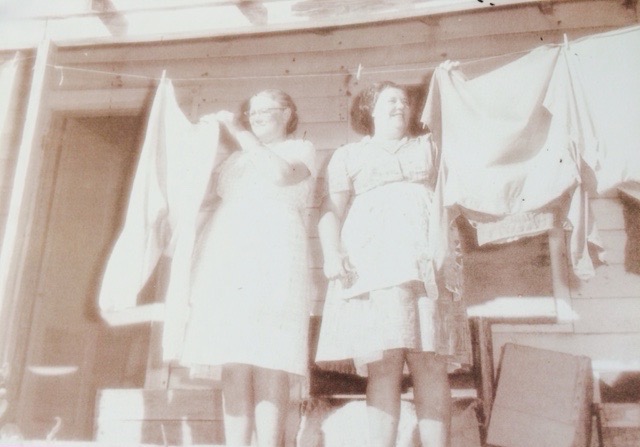 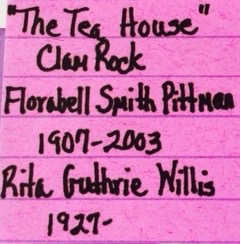 The reference to “Clam Rock” on the tag identifying this photo probably refers to a fishing spot off the beach since there are no “rocks” on Bogue Banks’s sandy beaches. “Rocks” or bottom-structure provide good fishing all along the North Carolina coast. “Clam Rock” also was used to identify one of the Salter Path fishing crews. According to a recent article on fall mullet fishing: “Throughout the 1900’s the annual mullet harvest supported about eight crews along the length of Bogue Banks. Each crew with its own unique name, such as Clam Rock, Red Bird, Money Island, Tea House, Hopey Ann Hill and Bell Cove, that typically reflected a landmark on the island." [vi] Was the Clam Rock crew staying at the Teahouse when this photo was taken, or were the Clam Rock and Teahouse crews one and the same? We do not know.

No evidence exists any of these fishing crews built wooden structures to accommodate temporary stays at various sites. We assume the Teahouse crew/Clam Rock crew, either with or without Alice Hoffman’s knowledge, took advantage of the abandoned Teahouse, knowing she would never again use it.

No one knows what happened to the Teahouse. Some claim it washed up after a hurricane, and locals moved it to Salter Path. But, if so, where is it today? Others say that story is doubtful.

In a story of Salter Path written as part of a North Carolina Sea Grant, Ann Green states,  “In the back of Hoffman's large estate, which included much of the island, local fishers used an old shack —nicknamed ‘Mrs. Hoffman's tearoom’— for their nets.” [vii] Ann Green’s story lacks precision, and it is doubtful she is describing the original oceanfront Teahouse. This “tearoom” may have been an outbuilding Alice had behind her house, maybe a remnant of the Royall family’s original house, the locals referring to it facetiously as a “tearoom.” If anyone knows what happened to the original oceanfront Teahouse, we would love to hear that story.

[i] This issue of the Potsdam Courier appeared at http://beaufortartist.blogspot.com/p/1913-visit-to-beaufort-bogue-banks.html