It’s just up the road, not the whole sprawling Bogue Banks house where Alice Hoffman lived from 1917 to 1953 but an important remnant of it—the old town hall.  A search began in 2013 after Corrine Geer, who had worked for the town in the mid 70s, said the old building was sold at auction when the new building replaced it. Discoveries made since correct past misconceptions.

Let’s start at the beginning. When John Royall sold about 2,000 acres of Bogue Banks’ property to Alice Hoffman in 1917, her purchase included at least one house, which, according to Capt. George Smith, who lived in Salter Path at the time, Royall had built for a physician, named Dr. Allison. In an unpublished autobiography, Alice Hoffman confirms that she rented this cottage built for John Royall’s physician and that John Royall’s family had a home nearby.[i] Earlier stories mistakenly had her living in a fishing/hunting lodge, which Royall had built for himself.

In a 1964 court deposition, Capt. Smith, speaking of the physician’s cottage, recalled that, “…he hauled materials for the house from Morehead City in his boat …and helped Royal build the house….” Alice Hoffman rented the physician’s cottage before buying property from John Royall. Royall, according to Capt. Smith, “overhauled the house he had built for Dr. Allison to suit Mrs. Hoffman.” Smith used his boat to haul from Morehead “materials … used in changing the house…” and helped Royall “overhaul the house.” These changes involved the addition of a bathroom with running water, which Alice had requested. John Royall also added a sun parlor for her. [ii]

Alice then made further additions, including two more bedrooms with bathrooms and, later, added to the kitchen. The expanded house is frequently described as a sprawling home, reputed to have seven cellars. She called it her “Shore House.” 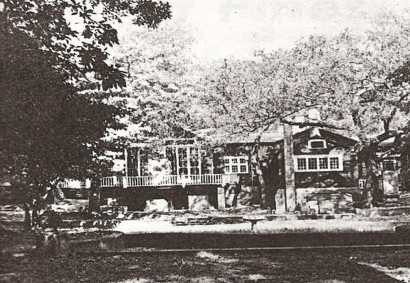 All evidence from Alice’s papers suggests she remained in the remodeled cottage when she bought property from Royall. We know on one occasion she was looking for a gardener and said she could offer him a “bungalow,” which the Royall family had recently vacated. We also know she ordered materials to build at least one shed.[iii] We do not know what happened to John Royall’s house or other buildings that were on the property. We assume most of them were razed or sold off. (See “Locating Alice’s House” post.)

The assumption, for years, was that the original structure Alice lived in was also razed when the Roosevelts began to develop the area. An early Shoreline Editor George Eastland and others talked about a small portion of Alice’s house that was saved. He thought it was a bedroom, but others disagreed. “It was a kitchen area from the Hoffman house,” said Don Brock, who used it as an office when he first started working for the Roosevelts. This small L-shaped portion of Shore House was placed on the corner of Yaupon Drive and Salter Path Road.

Some early residents considered it an eyesore and made a case that having a “commercial building” in this location was not in keeping with the covenants of Pine Knoll Association, the only homeowner association in existence at the time.[iv] So, in 1974, Don Brock agreed to move.

At the time, there was no town hall building. Unofficially, space at the Atlantis Lodge was serving that purpose. When Brock moved, so did the remnant of Alice Hoffman’s house. It was placed on the municipal site and became the first town hall. 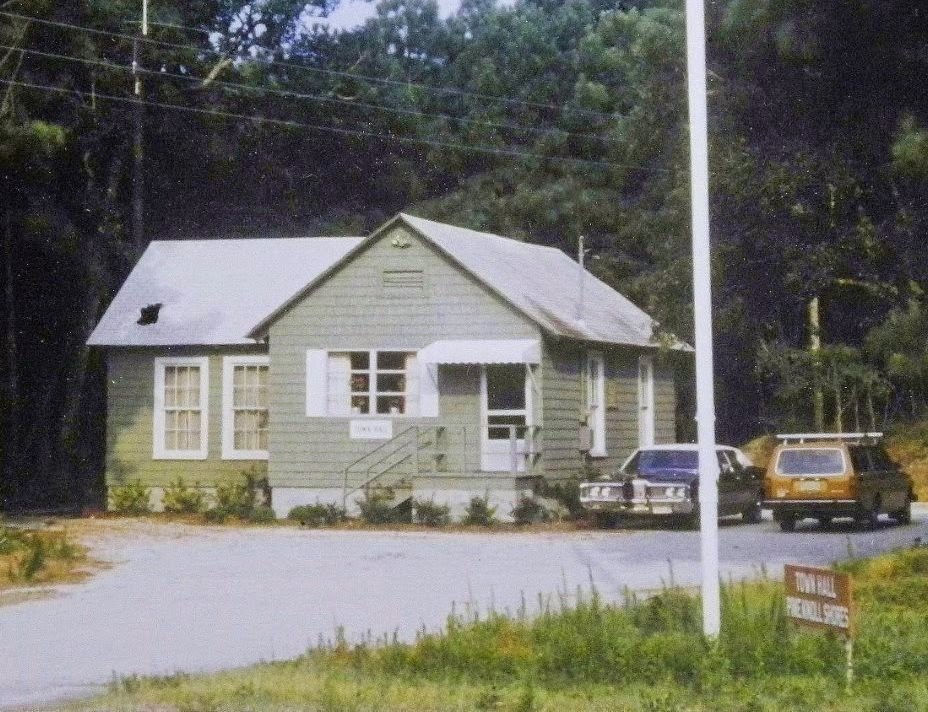 When the new town hall was built, the old one could have been destroyed, but it was not. Former Town Clerk Corrine Geer said John Collier, a surveyor who had retired here, bought it at auction and moved it to Salter Path around 1979, but she did not know where. 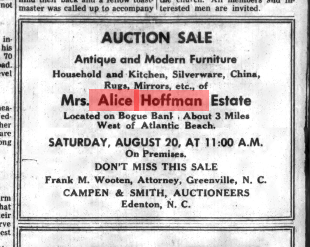 In the meantime, by accident, I overheard Morehead City native Bill Taylor talk about how Alice Hoffman’s house had been divided into parts and sold at auction. Some time between 1953 and 1955, Alice Hoffman’s furnishings had been sold at auction, a fact confirmed by Robert Frippin, who, along with another Morehead City resident, Frank Marino had attended the auction and purchased furniture. Bill Taylor thought the second auction took place in the early 1960s. His father, owner of a plumbing supply business, bought two sections of the house, one fairly large section with several rooms and one smaller part consisting of one room. Bill remembers the house as having green siding.

His father and older brother undertook the job of moving what they had bought to Shackleford Street, in Morehead City. Bill said: “It was quite a site.” He recalls that they undertook the move on a Fourth of July weekend. His older brother, who had been given the job of measuring the buildings, miscalculated the height of the larger section. They were moving it on a flatbed truck. When they got to the bridge, they discovered the structure was not going to clear the bridge. They were stuck. It was the old drawbridge, of course. Traffic was backing up, and Bill’s father climbed up and started sawing. They finally got it over the bridge. Once installed on Shackleford Street, the two sections of the house were used for plumbing supplies until the Taylors’ business closed, and sadly, those two remnants of Alice Hoffman’s house were later razed.

I wondered if someone else had bought other parts of Alice’s house or other buildings on her property in the 1960s and moved them somewhere else in the area. Bill Taylor thought the three sections of the house—the two his family bought and the one used as a town hall—represented the only parts of the house that were saved, but he was not sure.

So, it became more important than ever to find what happened to the old town hall. Several tips led to dead ends. Then, an exciting discovery! The section of Alice Hoffman’s house moved by John Collier in 1979 is still standing. It is today a beautiful, well-maintained home in Salter Path, on the sound side of the street. Clara Mizelle is its owner. She said she bought it for $1,000. Over the years, she has upgraded the house, adding new siding, but the outline of the house is exactly the same as it was when serving as Pine Knoll Shores’ first town hall. 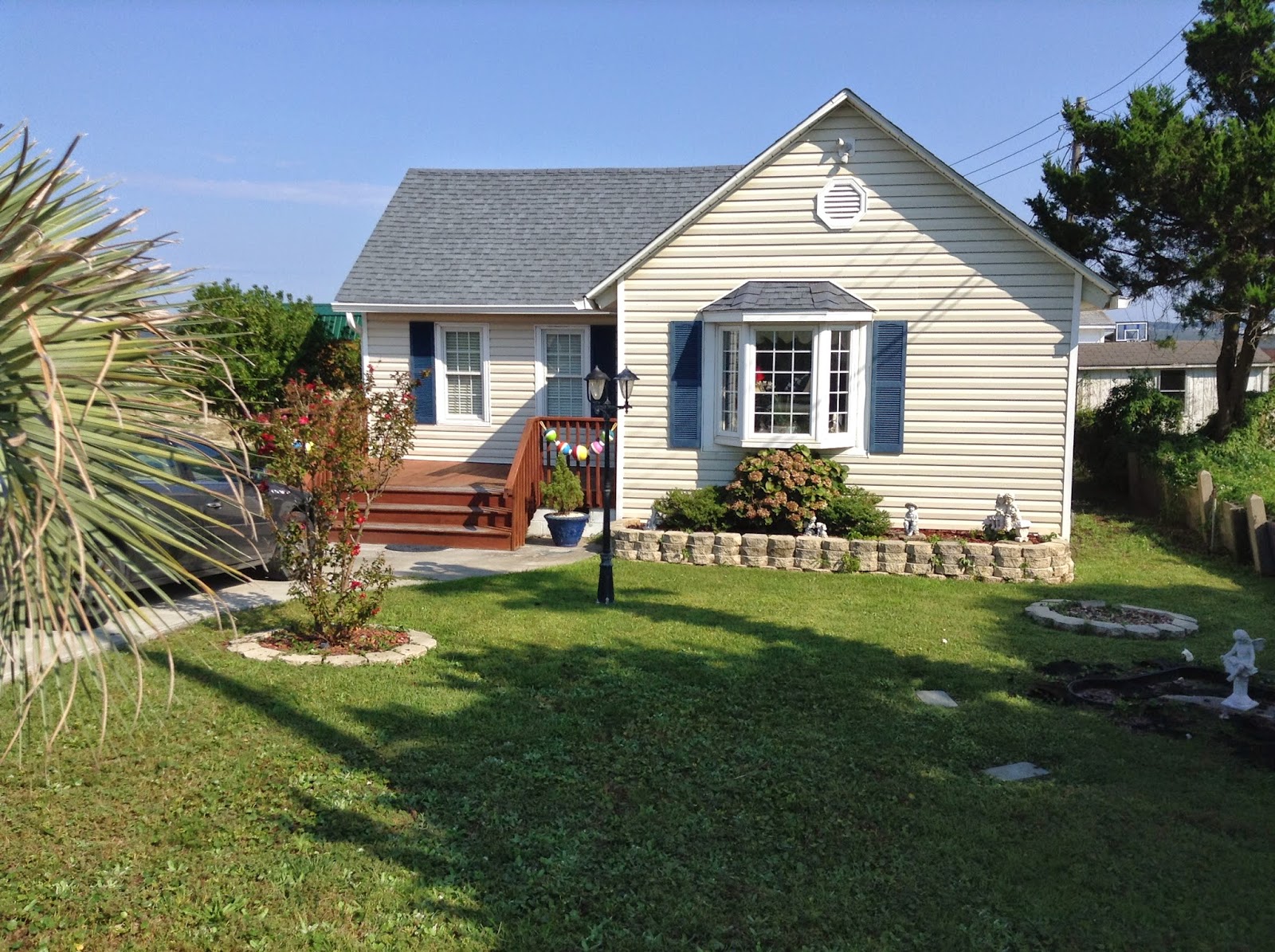 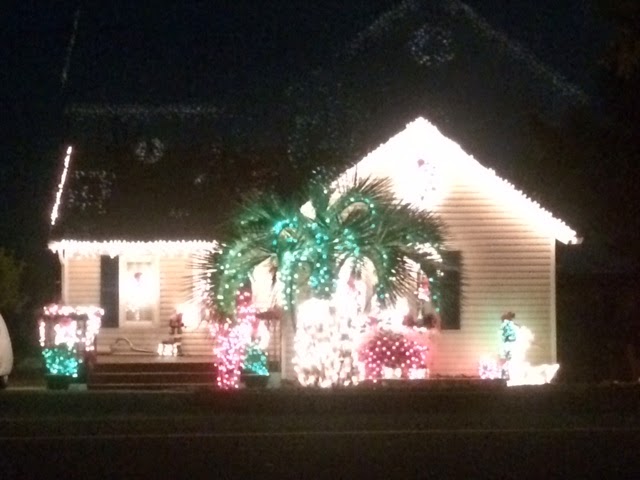 Photo of the house beautifully decorated for Christmas 2014

Below is a map created by Walt Zaenker showing the various locations over the years of Alice's house or parts of it on Bogue Banks: