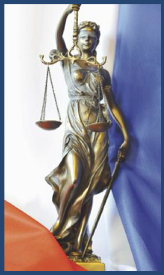 Following the trail of Alice’s financial misadventures requires an unscrambling of a long series of court cases. I say “series,” but, in fact, some were concurrent cases. The tangle of legal battles involving all the properties she had purchased in New York, North Carolina and France could fill volumes. This part of the story begins at the peak of Alice Hoffman’s financial collapse in 1935. In the subsequent three years, Alice’s life changed forever. The Depression was lingering on, and another major war was brewing. But, the focus here is on Alice Hoffman’s legal battles, with special emphasis on Carteret County court cases. Alice on crutches in 1937 with friend Pauline Crawford, writer for the New York Herald.[i]

Physically, Alice was failing. She referred in letters to her lameness and to experiencing the fatigue of old age. She had been forced to leave her Chateau des Landes property, but had gone back to France to continue the fight for it. World War II was gaining momentum. She returned to the U.S. and, around 1939, took up permanent residence at Bogue Banks. She would never see France again, having neither the strength nor the financial ability to maintain her transatlantic pace. Between 1935 and 1938, she had effectively lost control of all her property.

Alice’s financial dealings were all complex, but those involving her Carteret County property were the most baffling. Writing a 3 ½-page-letter on July 28, 1938, to Mr. Raymond Harper, one of her French lawyers at Harper, Szlapka & Harper, presumably about cases they were handling involving her French creditors, Alice described a jumble of legal problems in New York, North Carolina and France. A large section of the letter referred to paying off her debts by selling her North Carolina property.

Her Carteret County lawyer at the time was Llewellyn Phillips, a recent law graduate. For $17,000, he had bought all of Alice’s Carteret County property at a public auction held to satisfy debts. Not wanting to conclude she had mistakenly put her trust in him, she was desperately holding onto the belief he was acting in her best interests.[ii] 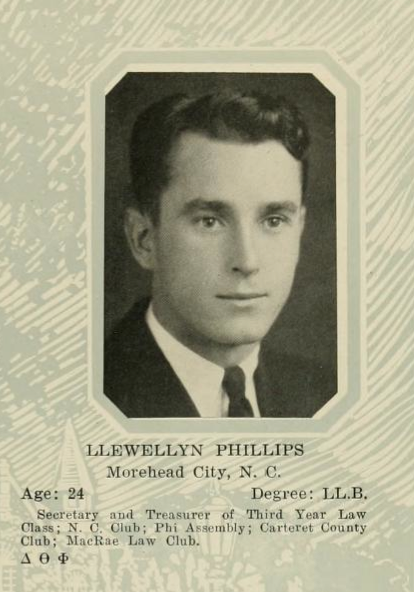 The suggestion that Phillips was not fairly representing her came from a letter by another lawyer, a Mr. McNeill[iii] of Washington, DC, who was an acquaintance of Alice’s niece, Eleanor Roosevelt, and of former President Teddy Roosevelt. Alice wrote that Mr. McNeill warned Eleanor, “…the feeling in North Carolina in connection with my property of Bogue Banks, was very much against the manner in which it had been handled by my attorney, Llewilyn [sic] Phillips.” McNeill had sent Eleanor copies of court records confirming that Alice’s “interests were not properly cared for.”

On page two of her July 28, 1938 letter, Alice wrote that McNeill also told Mrs. Roosevelt the Bogue Banks “property was worth at least $100,000 and was increasing in value every day.” One would think that this estimate of the property’s worth would have given Alice pause, but, instead, she concluded: “...that in accepting Mr. Phillips’ offer, I was repaying him for his trouble in connection with it.” She was grateful he had recently not charged her for his services even though she did mention that she had paid him about $25,000 for past services.

This letter revealed the tangled web she was caught in: “…I had no reason to doubt that Mr. Phillips had my interest at heart …as he had done more for me than any other attorney whom I had ever employed in respect to taking the responsibility of the detail of Bogue Banks off of my hands, as soon as he learned that my trustees were charged by the holder of the second mortgage on my former house at 1006 Fifth Avenue, to curtail my income to actual ‘support and maintenance’.”

Some time later in North Carolina, Llewellyn Phillips would lose his law license.[iv] Alice’s letter could have been used as evidence against him. In it, she stated he had suggested the destruction of all their correspondence to make it easier for him to claim that he had bought her Carteret County property with his money. Even that deception did not deter Alice. She did, however, have second thoughts about his plan for paying off her New York debts with her Carteret County property: “I think it only fair to Mr. Phillips to let him know that the plan which we thought to be the best when I saw him last, no longer appeals to me....” However, she added, “I should be very much humiliated to be obliged to acknowledge that I felt any dissatisfaction in his dealings with me....” A subsequent Carteret County court proceeding known as Warren et al v Hoffman reinforced this reluctance.[v]

Having taken out second and third mortgages on her New York property and having borrowed money from her trust funds, she had few options left. She no longer had New York property to use as collateral for loans, and monthly stipends she was receiving from her grandfather’s and her father’s trust funds were greatly reduced.

She is telling all of this to one of her French lawyers to let him know how desperate her financial situation was. Harper, Szlapka & Harper was not the law firm handling her Chateau des Landes case involving the eminent domain claim on her property by the French government, but to complete the picture of her circumstances, she included in her letter references to her attempts “to have the present decree in France annulled and to offer at the current market value a portion of the Chateau which is not indispensable from it, to the authorities, upon condition that I retain the balance.” She had taken this fight to Washington D.C. and tried to use her Roosevelt connections to hold sway, strangely using the death of Eleanor’s husband’s brother in France during World War I to make her case. To her dying day, she would fight this sad, losing battle for Chateau des Landes from her home in Bogue Banks.

Given the mental confusion she revealed in the July 1938 letter, it may be no surprise that other papers suggested some thought she was “non compos mentis.” But, to understand fully Alice’s position, it helps to have a snapshot of the court cases she was facing in North Carolina. Fortunately, her last attorney Frank Wooten, who later donated Alice’s papers to East Carolina University’s Joyner Library, prepared a summary that helps explain the 1938 letter’s references to her North Carolina problems.

January 7, 1935 – All the property held by the court to pay Alice Hoffman’s outstanding debts was sold at auction to Llewellyn Phillips, “the last and highest bidder,” for $17,000.

1936/1937 – As a result of an earlier case in New York City, On March 11, 1930 – City Court of New York had rendered a judgment against Alice Hoffman in favor of Edward Blum for $2,219.35. This was known as the Pink Judgment because Insurance Superintendent for the State of New York Lewis H. Pink represented Blum. It was Pink who initiated a case in Carteret County Superior Court to collect on the earlier judgment. The Carteret County Court decided in favor of Pink on behalf of Blum to have Hoffman’s property sold to pay for judgment. Llewellyn Phillips intervened, requesting a temporary restraining order, claiming he owned the property in question not Mrs. Hoffman.

August 16, 1937 – Phillips’s restraining order was blocked, and the sheriff conveyed the deed to the Bogue Banks property to Louis H. Pink. The property was then sold at auction to the highest bidder, John. L. Crump, for $1,000.

It is at this point that Eleanor Butler Roosevelt’s children with John Marshall Mathias as trustee acquired Alice Hoffman’s property, but rather than being the end of the court cases, this is the beginning of another part of the story. See “Alice’s Financial Misadventures:Part III.”

[iii] The Mr. McNeill referenced in Alice Hoffman’s letter is most likely the father of George McNeill, who was the Roosevelts’ North Carolina attorney when they were developing Bogue Banks. George McNeill’s father was Robert McNeill, and he had a law firm in Washington, DC, from the 1880s to 1960. (Yes, he maintained a practice into his 90s.) He also had North Carolina roots and maintained a law license in North Carolina. In fact, in 1940, ran for governor of North Carolina, losing to the Democratic candidate, Joseph Broughton. Robert McNeill’s son, George, may also have been involved in giving his father information about Llewellyn Phillips since George McNeill went to Wake Forest to get his law degree, went into practice with his father and then opened a practice in Morehead City in the mid-1930s. George McNeill’s son Robert, also of Morehead City, provided the above information in a telephone interview on June 23, 2014.