The core of the following story appeared under the title “The Atlantis Lodge” in the July 2010 The Shoreline. Since that time, we have learned considerably more about the history of Pine Knoll Shores.

A.C. Hall, owner of the Atlantis Lodge—the first motel in Pine Knoll Shores—says that on a recent to trip to Raleigh, he stayed on the top floor of the Renaissance Hotel: “I had requested a room with a view of the city, and when I went to the window, you know what I saw? Trees.” It’s no coincidence that when driving past the Atlantis Lodge in Pine Knoll Shores, what one sees first is a modest wooden sign nestled among trees. The lodge is situated on the oceanfront in such a way that it is barely visible from Salter Path Road, and its contemporary wooden design blends perfectly with the natural setting. 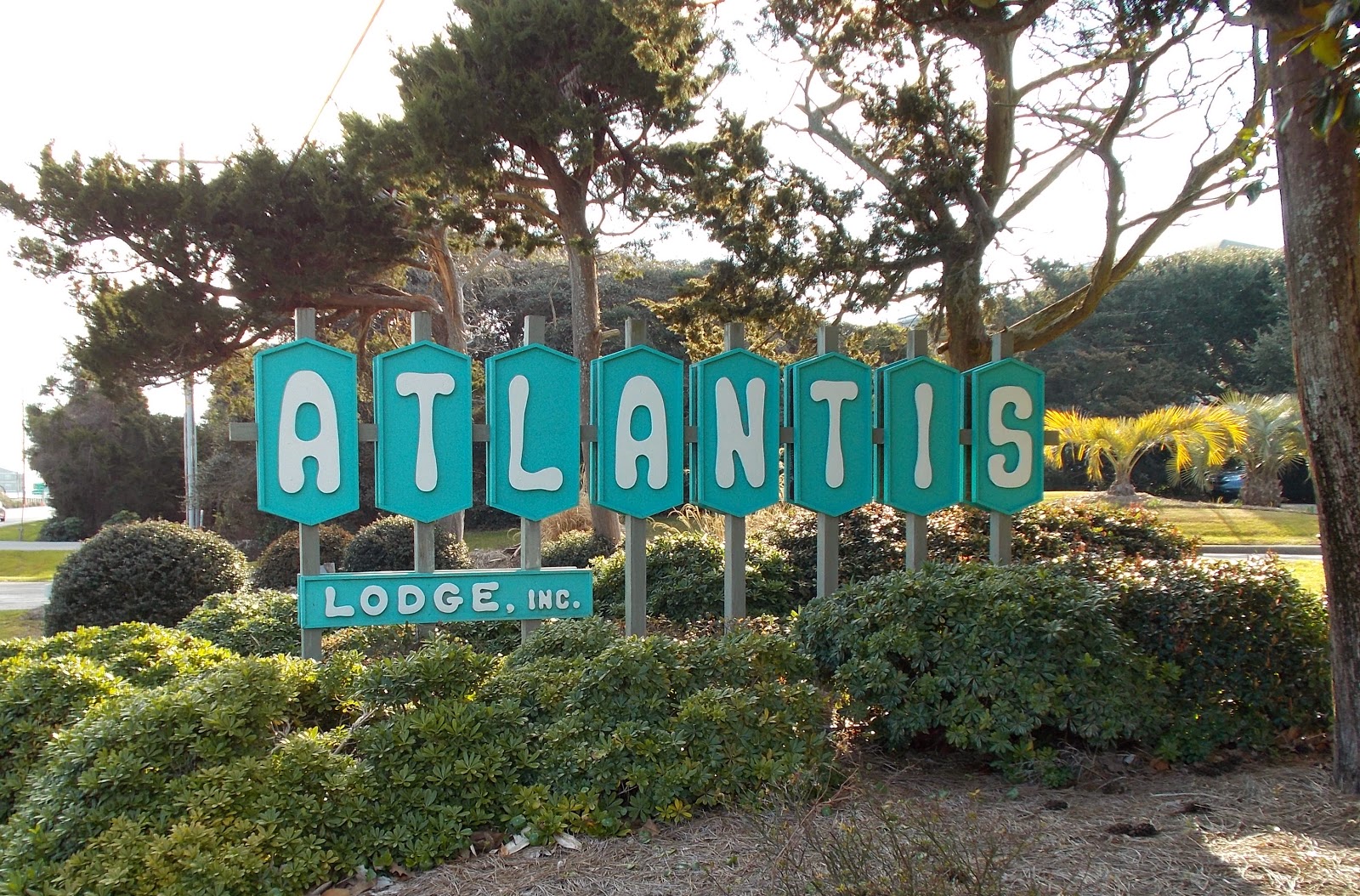 A.C. Hall was Raleigh city planner from 1952 to 1980 and the man responsible not only for the Atlantis Lodge but also for the layout of the main section of central Pine Knoll Shores. His fondness for trees is evident in both Raleigh and Pine Knoll Shores.

His wife, Dot, and her parents, Shella and Ruth (“Mabee”) Bray, are largely responsible for bringing A.C. Hall to our shores. Sadly, Shella Bray, who was a railroad worker, died in an accident in 1958. The railroad company offered the family a settlement of $30,000. After paying their lawyer, three Bray siblings divided the money. A.C. and Dot were able to save most of their share. That’s how the dream of owning beach property started.

“Mabee loved the beach,” says A.C. The family used to go to Nags Head on vacation. However, when looking for beach property to buy, they quickly eliminated Nags Head because it had no oceanfront lots with trees. They visited Wilmington-area beaches and could not find a section with trees there either. Then they came to Bogue Banks. Driving beyond Atlantic Beach on an unevenly paved road no more than 12-15 feet wide, they saw an expanse of property totally wooded on both ocean and sound sides.

Aerial photo of PKS at the time A.C. Hall bought the property for the Atlantis. To the left of the north-south streets is the area he was asked to design for development.

It was 1960, and Shelby Freeman, who had recently built the Iron Steamer Pier, was selling property owned by Roosevelt family members who had inherited Alice Hoffman’s land on Bogue Banks. He was working for Ted Hearth of Stone & Webster, a company representing the Roosevelts. Shelby showed A.C. a plat that stretched westward on the beach from what was at the time the “New Morehead Pier,” today the Sheraton Inn pier, to what is now the Atlantis Lodge. At the time, it was the only plat available for commercial development on the ocean. A.C. wanted an unobstructed ocean view, so he chose a site as far from the pier as he could get.

He felt he could afford only 200 ft. of this oceanfront property, which would cost $16,000, but Shelby needed to sell 300 ft., so he offered to sell the extra 100 ft. for $5,000 and finance that amount for the Halls. It was an offer too good to refuse. So plans for building a lodge began.

But, first, A.C. had to borrow more money. Even with his dad’s help, A.C. was having trouble borrowing the $70,000 he felt he needed to begin building a quality lodge.  Finally, with the assistance of Cliff Cameron, a Raleigh neighbor, he was able to get a Small Business Administration loan. For a 10% share of the business, Cameron-Brown Mortgage Company guaranteed the loan.

While building, A.C. and his family would make trips down to Bogue Banks from Raleigh and rent the Deffenbaugh Cottage on a sound-side lot not far from the site he had purchased. This was all part of the 1950’s phase of the town’s development. (See post on “Early Development of PKS.”)

A.C.’s mother-in-law, Ruth “Mabee” Bray, is central to the Atlantis story. She was selling high-end women’s dresses for a shop in Raleigh and was beloved by her customers. The Burton family, owners of a dress shop in Cameron Village, decided to put a similar shop on the Atlantic Beach causeway and offered Mabee the manager’s job there.

So, she rented an apartment and worked in the causeway dress shop. In 1963, when the central building and east wing of the lodge were completed, Mabee moved into an apartment downstairs in the lodge’s main building. She would go on to manage the lodge for 17 years—from 1963-1980.

Early ad in The State magazine.

Throughout the 1960s, Roosevelt Property Manager Ted Hearth continued to make trips to Bogue Banks and began staying at the Atlantis Lodge. He soon learned that A.C. was a Raleigh city planner and asked if he was interested in working, in his spare time, on a plan for the next phase of development in Pine Knoll Shores—from Cedar Road to Municipal Blvd. A.C. agreed to take on the project.

Ted Hearth could not have found anyone more qualified. A.C. had graduated from Wake Forest with a degree in biology, studied at N.C. State’s School of Design for three years and completed a master’s degree in City Planning from Chapel Hill.

“To get to know the lay of the land I was to work on here,” A.C. says, “I put on big boots and walked it many times. It was swampy, had lots of water on it and lots of low spots. There were snakes, several small ponds and a large one around where Holly or Willow is now.” The Roosevelts had wanted to have a water-treatment plant and sewer system, but the state would not allow it. “That meant putting in septic tanks,” says A.C.  First, he needed to design canals to drain the land. Then, he had to identify appropriate sites for homes where septic systems would work. “In most areas, you couldn’t dig very far without running into water,” he says.

In Raleigh, A.C. had connections with Piedmont aerial surveyors, who did contour maps, so he hired them to do aerial contour maps here. He had another friend Jerry Turner, who was a landscape architect with a drafting room at home. A.C. got his help in drawing the first plan.

Bringing together knowledge gained from aerial contour maps and from many soggy walks through the area with skills as a master land planner and designer, A.C. went to work. He determined where the canals had to be for drainage purposes and how to place as many houses as possible on canals to provide all the advantages of waterfront property. He identified the best locations for home sites to ensure they could have well-functioning septic systems. He wanted to design quiet neighborhoods with lots of trees and did not want there to be any through traffic. With a smile, he says: “You better know where you are going when you drive in there. It’s not easy to find property if you don’t, and that was by design.”
In 1967, Ted Hearth hired Von Oesen Engineering Firm from Wilmington to do some survey work for implementing A.C. Hall’s plan. Working on this project was Don Brock, who, like A.C., was hired by Ted Hearth to work for the Roosevelts and help guide the implementation of A.C.’s plan. 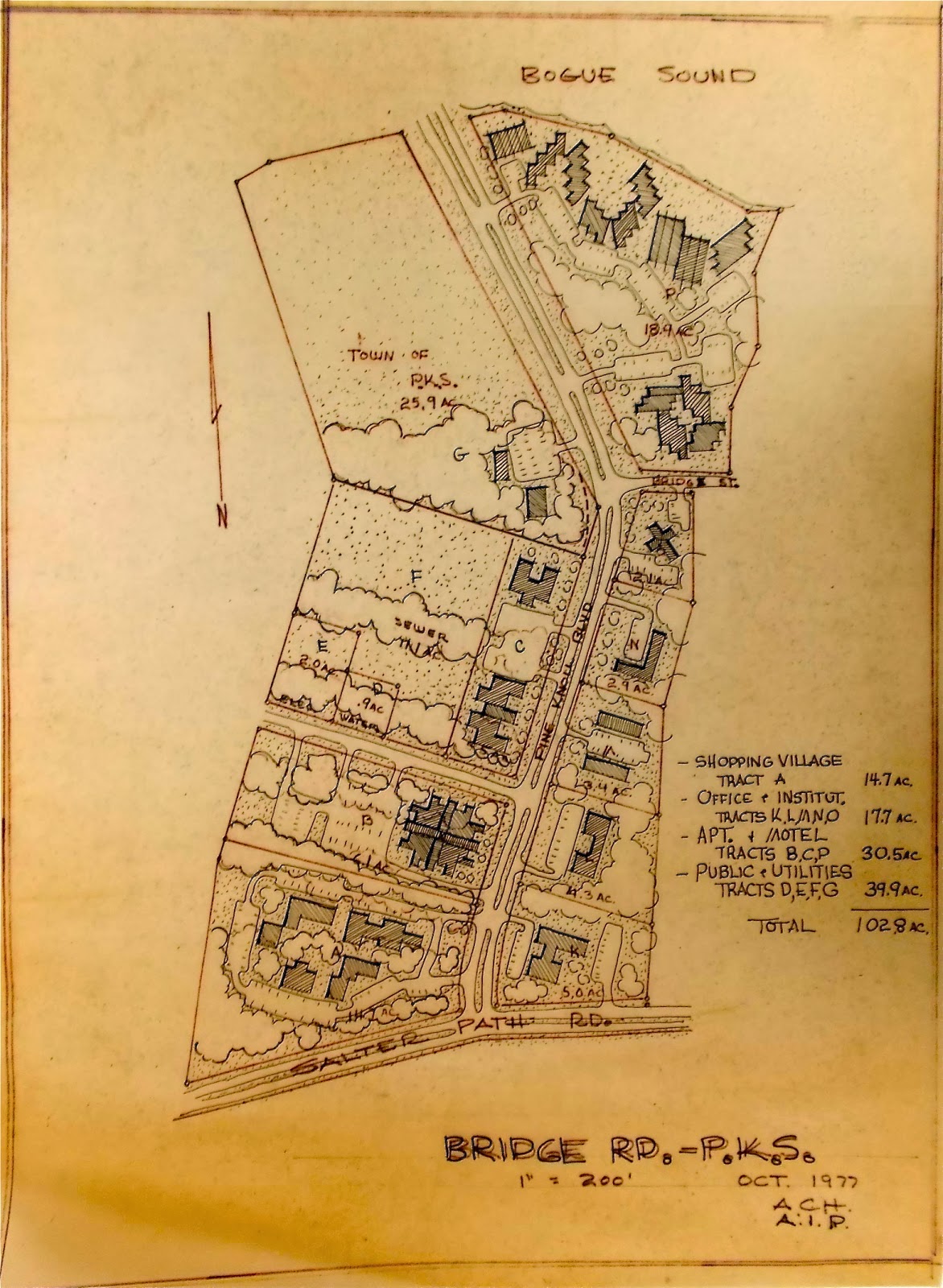 A. C.’s plan for downtown Pine Knoll Shores
There were two aspects of his plan that may have been too farsighted for the time. He envisioned Municipal Boulevard leading to an attractive, tree-lined town center with a pond and, nestled within the trees, sites for small shops, restaurants, and parking. The boulevard was to open on the north side to a bridge that would go from McGinnis Point across the sound to Morehead City. But, alas, these were among the few ideas in A.C.’s plan not adopted. 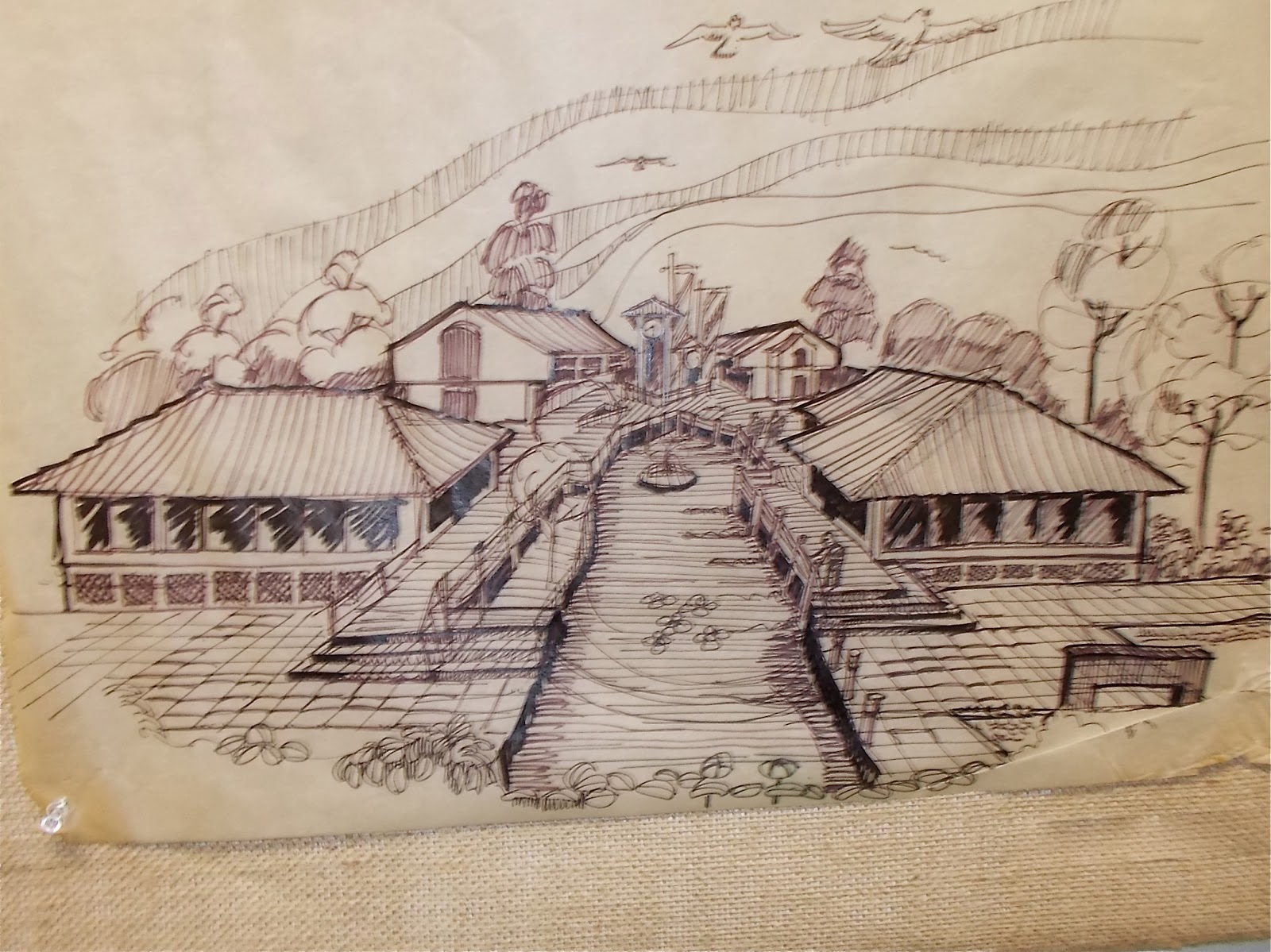 The town did, however, adopt the City Seal he designed. When the town incorporated, there was no town hall, so the Atlantis Lodge served that function. A back office, now used for supplies, provided space for the town clerk and the Police Department. Mabee, who died in 1993, was on the first Board of Commissioners—the only woman on the board at the time.

A.C Hall’s sketch of a billboard advertising the new PKS

In 1982, Don Brock still working with the Roosevelt family, still represented by Stone & Webster Management Consultants, approached A.C. about developing a plan for western Pine Knoll Shores, which became Beacon’s Reach. Don says that A.C. had just retired as Raleigh city planner and did not want to take on another big project. (Landscape architects Larry Zucchino and Barrett L. Kays worked on that project. See post on “Beacon’s Reach.”)

A.C. and his wife, Dot, had maintained their primary residence in Raleigh until A.C. retired, and then they moved to the Atlantis Lodge. A.C. created a new apartment by combining four upstairs units.

Over the years, the Atlantis, the lodge thrived and expanded. First, a top floor was added to existing buildings. Then came a western wing with 16 units and a top-floor lounge and finally two buildings that, as A.C. puts it, “stick out toward the water.” Today, the Atlantis Lodge has 42 units—36 efficiencies and six regular motel rooms. Guests enjoy a private outside pool and the upstairs lounge. The lodge is open year round, except for three weeks in December. “It always opens for New Year’s, and for some reason is always full the last week in February,” says A.C. Many guests return year after year. “By the end of the summer,” he adds, “we are half full for the next summer.” Guests schedule their week(s) before leaving, and some rent for one or two months.

The Atlantis is pet friendly. In fact, A.C., as member of numerous hotel/motel boards on the state and national levels, was instrumental in getting the law changed to allow dogs in motel sleeping rooms.

What great contributors to the community Mabee and the Halls have been. When you look out a top floor window anywhere in Pine Knoll Shores and see a dense green canopy of maritime forest, you may think of all the people we have to thank and know that A.C. Hall is certainly one of them.