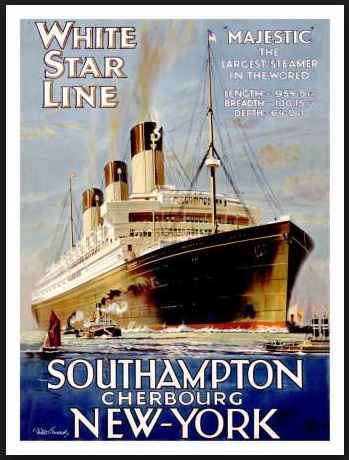 Up until the late 1920s, Alice Hoffman was spending freely; travelling widely, including cross-Atlantic and cross Pacific voyages; buying up real estate in New York, Paris and North Carolina; pursuing other business ventures—e.g., logging, raising cattle and dairy farming—in North Carolina while living primarily in France, entertaining, racing horses and gambling. Born to a wealthy New York family in 1862, she was very much apart of a gilded age. She had servants—nurses, personal maids, cooks, chauffeurs, secretaries, gardeners and other caretakers. She lived most of her life off of two family trusts, a large one from her grandfather Theron R. Butler and a smaller one from her father Albert Green. Between the 1929 stock market crash and the onset of World War II, the gild cracked and peeled.

Alice made a series of decisions between World War I and World War II that paved the road to financial disaster. First, at the outbreak of World War I, she bought Bogue Banks property without a plan for developing the island and with the illusion that she could visit periodically in cool seasons and, when she was away, rely on a staff of people to manage affairs here for her.

Secondly, when she arrived at Bogue Banks, she could not live in the physician’s cottage rented from John Royall without remodeling it, even though Royall had done some remodeling at her request and she had not yet purchased the property. She also spent freely on furnishings—some of which like a marble mantle piece, she had shipped from France. And, of course, she also imported her roses and had a terraced garden put in around the house.

Remodeling seems to have been a requirement of Alice’s existence. In the 1890s, when she moved into a rental house on Avenue du Bois de Boulogne, she went to extreme lengths to furnish and remodel not only the house but also the gardens. Having a sizeable chestnut tree moved to her yard suggests that Alice saw no obstacles to getting what she wanted where she wanted it.

After her divorce in 1910, Alice had the illusion that she could make money in real estate and set up a company she called Eastern Properties, Inc. Her first purchase was Horse Island off of Greenwich, Connecticut, for which she needed a loan of $10,000 for the down payment. To secure this loan, she put up 200 shares of GM stock as collateral. The remainder of the purchase price was mortgaged. This approach to buying real estate was common for most of her purchases. She would use property as collateral to take out loans. 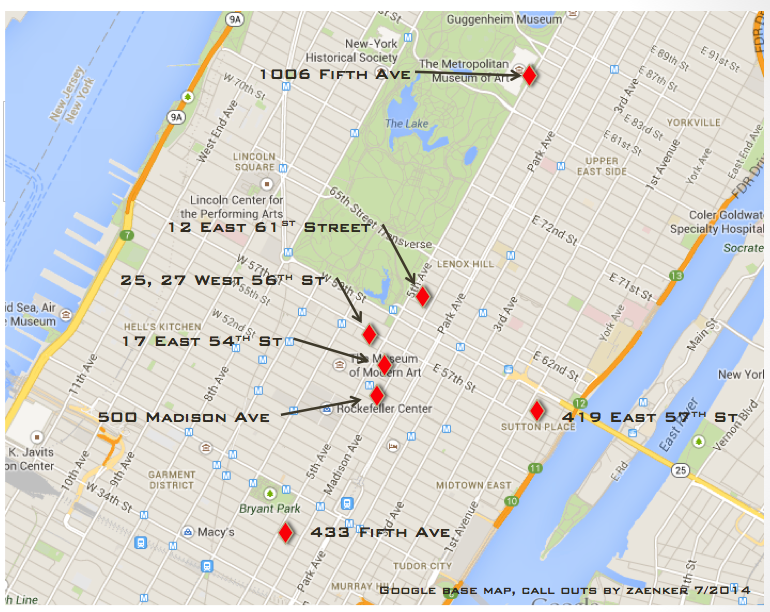 Shows some of the properties in Mid-town Manhattan that Alice had an interest in, either owned outright or through her trust funds.

Shortly after her last New York City purchase, she began buying property in North Carolina. She had mortgages on each of these properties, sometimes two or three on the New York City properties. Meanwhile, while she was in New York, she paid to stay either at a hotel or in an apartment she rented.

She never did anything with Horse Island and ignored early advice to sell, only to end up selling it later at a lesser price. This became another part of the pattern. Alice always thought she could get more for her property than she could. As an absentee landlord, she rented her New York City property, which provided income she felt she needed to rent at Bogue Banks and then buy Royall’s property. However, she had trouble with renters and, on more than one occasion, tried settling matters by taking them to court.

Thirdly, in North Carolina, she decided to raise pedigreed cattle that she would send to France after the war to rebuild that country’s livestock. In order to accomplish this goal and also have a dairy farm, she purchased more land across the sound in what was then called Mansfield, taking out another mortgage. She also paid a full-time farm manager.

After World War I, she returned to France. In 1922, the owners of the Avenue Bois du Boulogne property had family members who wanted to live there, so forced Alice to leave. Not wanting to be asked to leave her home again, she made her fourth major mistake, which seemed at the time to be her best purchase. For the bargain price of $20,000, she bought five hectares (about 10 acres) of property in Suresnes, which she referred to as her Chateau des Landes estate even though the chateau was no longer on the property. In its place was a smaller house, which she proceeded, of course, to remodel, again estimating those costs to be another $20,000. In a 1936 financial statement of her debts, she listed $4,000 of interest due on her Suresnes mortgage. 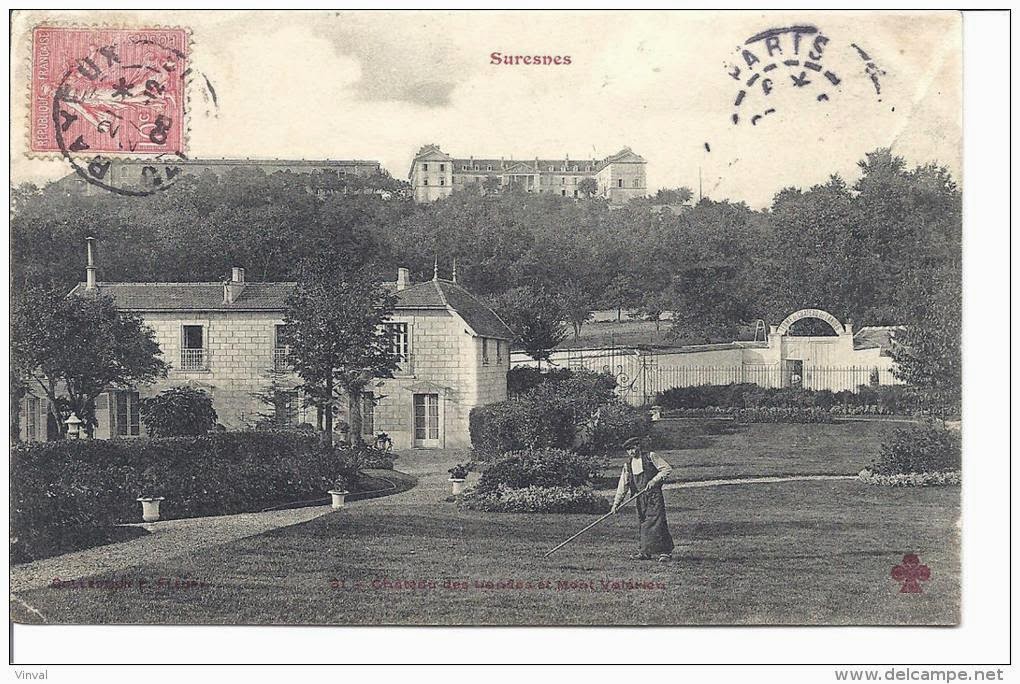 When she moved from Avenue du Bois de Boulogne where she resided for 27 years, Alice began to place large inventories of furnishings in storage, often shipping items between France and New York City and Bogue Banks. Storage and shipping would cost her thousands of dollars a year from 1917 to 1938. For example, in 1936, she paid $2,700 to a New York City storage company and another $1,200 for storage in Paris.

In the 1920s, she was also taking elaborate trips, most notably to China and Japan, never travelling lightly and always with people she employed. She, of course, was regularly crossing the Atlantic and making land trips to North Carolina. Whenever she left a residence either in North Carolina or France, she took employees with her and left others behind to care for the residence she was leaving for months at a time.

Wherever she owned property, she also had lawyers and pending lawsuits. She had three or more attorneys on retainer at a time. She also had a New York City accounting firm she regularly paid.

Her farming ventures in North Carolina required a full-time manager as well as sheds and dipping vats for cattle, bottle sterilization equipment for her dairy and miles of fencing. She had 16 tons of fencing shipped to Carteret County, and around the same time, her fear of electrical storms prompted her to order in New York City about 100 lightning rods, which she also paid to have shipped then installed around her property. Her livestock operations were periodically bedeviled with Bovine Tuberculin and Texas fever; there were also disputes about the pedigree of some of her breeding stock.

Living on Bogue Banks and having property across the sound required that she maintain a boat, initially an old one, which required repair and then, in 1923, a new one she purchased for $1,000. (This is the boat she called “Fred.”) She also had cars and, of course, trucks. Three she mentioned in her papers were a Desoto sedan; a Ford Truck, purchased in 1925; and a Packard Touring Car, purchased much later.

She was getting between $25,000 and $30,000 annually from her grandfather’s and father’s trust funds in addition to rent from her New York City properties, but was still not able to keep up with mortgage payments and other expenses. By 1930, She owed back taxes everywhere she had property as well as other debts she either ignored or paid for only in part. In North Carolina, her property tax debt to Carteret County went back to 1927. Between 1930 and 1935, she had borrowed so much against her trust funds that her allowance was reduced to mere maintenance, which she described in a letter to one of her Parisian lawyers as “a totally inadequate yearly allowance.”

The initial hit her grandfather’s trust fund took from the stock market was relatively insignificant since most of his investments had been in municipal and railroad bonds and in real estate, so his trust kept growing and more than kept up with monthly payments to Alice and her two sisters until Alice started borrowing from it. The father’s trust was much smaller to start with and seemed to be regularly overdrawn.

1933 is the turning point from which Alice never recovered. The French government forcibly acquired her Suresnes property for a city park under France’s equivalent of eminent domain even though Alice continued to fight to regain this property for the rest of her life. She actually received $80,000 from the French government, but saw little or any of it because she used what she received to pay a Mr. Boris Lepkowski to secure her other personal possessions in France. She neither had anything to show for this payment nor had the possessions he “secured.” All she had were receipts. (See post on Alice’s “Last Will and Testament.”) Her New York City rent dried up. In one case, a tenant sublet and pocketed the rent himself, resulting, of course, in Alice’s taking him to court, but he declared bankruptcy. She couldn’t find renters for other properties and ended up losing all of them.

In North Carolina, her farming ventures were disasters even though she did, at great expense after World War I, ship 15 head of cattle to France, which made her feel she had achieved her goal. Starting in 1925, she would make agreements (indentures) transferring deeds to her farm property to lenders only to take the deed back a year a two later. But by 1930, this game was up.

Her lawsuits against Salter Path were less successful than she hoped; her lawsuit in 1923 resulted in establishing that she owned the land and had to pay tax on it, but the villagers and their heirs could live there. Later suits were to lead to deeds granted to heirs of the original Salter Path squatters.

Before long New York debtors looking to encumber Alice’s assets to pay her bills started to add to her problems in North Carolina. In March 1930, unpaid debts led New York State Superintendent of Insurance Lewis H. Pink to start a suit against Alice to take possession of her North Carolina assets to pay what she owed in New York City. By this time, however, Alice had also borrowed so much against her North Carolina property that she had lost control of it. In 1935, all her property was up for sale at auction, and her North Carolina lawyer Llewellyn Phillips bought it for $17,000.