Pine Knoll Shores has a complex governance system. In addition to a mayor, town manager, board of commissioners and various departments of city government, the town consists of numerous homeowner associations. The exact number depends on how one counts them. Some sections of town have one homeowner association, and others have a master association with several small associations representing specific constituencies in a larger development.

Development that took place prior to the 1960s concentrated on easternmost sections of Pine Knoll Shores. In the 60s, this area became known as “old PKS.” There was no homeowner association included in the covenants during the earliest phase of development.
As the Roosevelts started to move development westward, they brought new players into the picture. The development team, led by the Roosevelts, now included management consultants from Stone & Webster as well as engineers and surveyors with Henry Von Oesen, Inc., including Don Brock, who would eventually work directly for the Roosevelts. This team produced detailed surveys of the land, topography, soil analyses, and water tables. Later, city planner A.C. Hall, local land-plan surveyor C.C. King and construction experts with heavy equipment such as A.C. Davis joined the team. Aerial photographs provided more topographical information. Numerous conceptual plans and layouts were formulated during this time, designating areas for residential housing, both single-family and condominium development; a commercial retail complex; hotels; motels; as well as recreational facilities, parks, marinas, roadways and transportation arteries.[i]

From these overarching concept plans, the next area selected for development was west of the original streets, which was legally called Pine Knoll Shores Extension, Section I through V. When implementation was underway, the Roosevelt family, working with local Attorney George McNeill, decided to create a homeowner association as a North Carolina corporation to manage common areas and functions. The Articles of Incorporation for Pine Knoll Association, Inc. (PKA) were filed with the Secretary Of State of North Carolina on May 31, 1967.

The responsibilities of the corporation, detailed in covenants, were quite extensive and included most of the services normally associated with municipal government—parks, police, fire, streets, trash, water service, enforcement of covenants, etc.  The covenants as a legal document go with the land. When property is purchased, membership in the homeowner association goes with it. Membership is not optional. The Ogden, UT, office of the IRS recognized PKA, Inc. as a 501(C)(4) corporation in January 1968.
The original PKA Board of Directors did not consist of residents. Most were men and women in some way connected to those working with the Roosevelts to develop the property:
Charles C. King, Beaufort, NC
A.C. Hall, Atlantic Beach, NC
Ruth Bray, Atlantic Beach, NC
Sallie Lutz, Morehead City, NC
George H. McNeill, Morehead City, NC
Alberta A. McNeill, Morehead City, NC
Mary V. Godwin, Morehead City, NC
Charles E. Lutz, Morehead City, NC
Ted Hearth, Naples, FL
The address of the registered office was 1002 Arendell St, Morehead City, which was the law office of George McNeill. The Roosevelt family provided whatever funding was required.

The subject of combining “old PKS” with PKA was first discussed at the PKA annual meeting in June 1967 and many times subsequently. No acceptable solution to the several legal, technical and political impediments was ever achieved.

The Roosevelts had decided they wanted common areas preserved for homeowners and did not wish to deed that property to a public entity; also, they wanted a way to ensure covenants were honored. Therefore, establishing a homeowner association for “old PKS” became necessary. In 1972, the development team established a new homeowner association that included the “old PKS” properties. It was called Pine Knoll Shores Corporation (PIKSCO) and provided a vehicle for conveying the common property from the trust and also for maintaining architectural control according to the covenants.

After several years of debate among the residents and owners, transition from developer-to-owner control started to take place in January 1973 when plans were underway for the town’s incorporation.[ii] The North Carolina General Assembly ratified a Charter for the Town of Pine Knoll Shores in April 1973. At that time, many municipal functions that had been handled by PKA were transitioned to town responsibility.

But, the Roosevelt Trust still retained ownership of common areas, including all parks and canals. It would take another four years for the Roosevelts to give up this control. On March 29, 1977, the parks were divided between PKA and PIKSCO and conveyed by deed from the Roosevelt Trust to one or the other homeowner association.

There is some overlap in area covered by these first two homeowner associations, but the breakdown is essentially as follows:  PKA has 710 single-family lots; PIKSCO has 400. The PKA and PIKSCO sections of town have the largest number of permanent residents in Pine Knoll Shores. The stretch of oceanfront property for PKA is one half mile, and for PIKSCO, it is one mile. 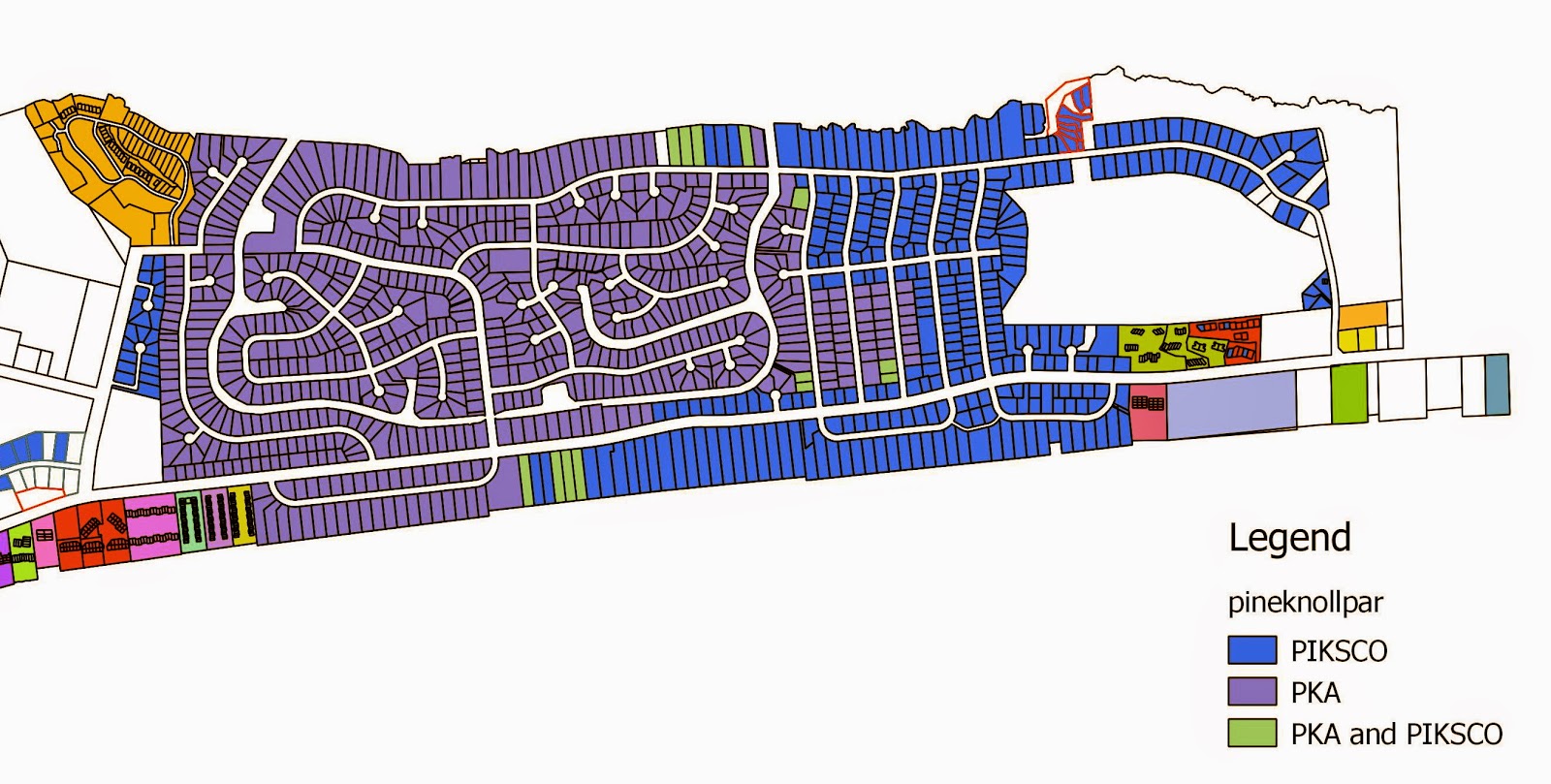 PKA is responsible for Ocean Park and Ramsey Park. In addition, it maintains three canal-based marinas—Brock Basin, Davis Landing and Hall Haven. PKA also holds the deed to King’s Corner Park, a small canal-front parcel that has no road access: the park includes three walkways that link to 11 lots. The original intent of this arrangement is unclear; perhaps it was a marketing gimmick to give those lots more appeal.

Because all canals are in the PKA district, their maintenance, including dredging, falls to PKA. PKA holds the deed to the bottom of the Pine Knoll Waterway. This extensive canal system, designed by A.C. Hall, was initially built to drain the land for development as well as to provide the benefits of waterfront property. Many PKA residents have homes on the canals with private docks and boat lifts for the ultimate in boating convenience.

PIKSCO is responsible for two sound-side parks and one oceanfront park, which provide members with multiple-use facilities and easy water access. Garner Park features seasonal kayak and canoe storage, a dock/fishing pier and a large picnic pavilion with barbecue grills and playground. McNeill Park, situated on the point between the sound and McNeill Inlet (a canal access), provides a boat-launching ramp with fishing/swimming pier, picnic pavilion and playground. PIKSCO also oversees Morgan Hammer Park, an oceanfront park with private beach access for residents.

Memorial Park, another oceanfront facility owned by PIKSCO, is leased to the town to help fulfill federal public beach access requirements. In compliance with federal guidelines, the town has established and maintains 11 public beach access sites with parking and in some case amenities. These public access sites are located approximately every half-mile along the five-mile oceanfront of Pine Knoll Shores.

There are no pools or tennis courts maintained by the PKA and PIKSCO homeowner associations. However, there is a reciprocal-use agreement between the two associations allowing members mutual use of the parks and facilities, except for boat slips, which may only be leased by members of PKA.

As is mandated with PKA properties, membership in PIKSCO occurs automatically when a PIKSCO-designated property is purchased. Each association is governed by a board of directors made up of homeowners/members who manage the corporation and make sure it fulfills its responsibilities to the membership. Day-to-day operations include issuing gate cards and stickers, renting boat slips or kayak spaces, renting the parks for private functions and, of course, collecting yearly dues. Most importantly, each association monitors its parks and marinas continuously to ensure they are safe and well maintained. The boards of directors function as liaisons between town officials and homeowners to keep them informed of administrative decisions that may affect them.

There is no community wastewater treatment facility in the parts of town developed before the mid-1970s: homeowners have septic systems. The early concept plans for developing the Roosevelt property included a centralized sewer system, but the state would not grant approval. When plans were submitted for a canal system, the Director of the North Carolina Department of Health included in his endorsement that canals would help in mosquito control and lower the water table, thereby improving septic-system function.[iii]

On September 24, 1984, PKA, Inc. filed amended Articles of Incorporation with the Secretary of State officially dropping the many municipal functions and identifying that it now operated under section 528 of the Internal Revenue Code, in effect also dropping the 501(C)(4) designation. Since that time, PKA has focused its efforts on the recreational use of the park properties for the benefit of the property owners and enforcement of PKA covenants.

Post Author: Walt Zaenker & Jean Macheca with input from Linda Cumberland
To contact the author or the History Committee