When traveling by boat along the inside channel of Bogue Sound from Atlantic Beach to Pine Knoll Shores today, we follow buoys that more or less keep our bow on a piece of forested land elbowing out into the sound. That elbow is McGinnis Point.

James “Cap’n Jim” N. Willis III, a long-time Atlantic Beach resident and a good source of historical information about this area, discovered that the 1800 Census listed “Jones Meginnis” as living on Bogue Banks. In 1820, a “Dorcas Maginnis” is listed. By 1830, the name disappears from census books.  Cap’n Jim thinks Jones and Dorcas were squatters at the point and no remaining members of the family were on Bogue Banks by 1830.  Both Cap’n Jim and Wade Willis of Salter Path refer to the point as “McGinnises P’int,” and have always known it by that name. Cap’n Jim says the “es” spelling would be their way of indicating a possessive, which we would write as “McGinnis’.”

The name does not appear on a 1978 Pine Knoll Shores’ planning map, but does later appear as “McGinnis Point,” without the apostrophe on a 1983 deed when building was in full swing at McGinnis Point. So, someone decided to take the point’s name and use it for the residential area developed there.
Earlier, A.C. Hall, current owner of the Atlantis Lodge and the person largely responsible for laying out eastern Pine Knoll Shores, had proposed a third bridge to the island at that point. He based his proposal on the possibility a major storm could create an inlet at narrow points of Bogue Banks east and west of Pine Knoll Shores, leaving a portion of the island including our town with no access by bridge to the mainland. Many at the state level agreed with him, and a third bridge became part of a long-term highway plan, but it never materialized.

Until the mid-80s, Roosevelt family members owned the property. A.C. Hall tried to buy some of it from them for a lodge; however, terms were not agreeable. Don Brock, a representative of the Roosevelts duringdevelopment of Pine Knoll Shores, says they began developing McGinnis Point around the same time as they were developing Beacon’s Reach.

The Homeowner Association named for the Ocean Grove condos remained at Beacon’s Reach (see Homeowner Associations Part II), but the Roosevelt family did not continue a relationship with Ocean Grove Associates or the subsequent development of McGinnis Point. John Jordan, an attorney from Raleigh, became a member of that group as did Bobby Mace of South Carolina. Kenneth Kirkman, who was a lawyer for the Roosevelt family at the time, also remained as lawyer for Ocean Grove Associates.

Originally, the plan was for 90 home sites. In 2009, the McGinnis Point area consisted of 63 residential units and 12 undeveloped lots on about 26 acres of sound-side property as well as seven oceanfront homes and a private beach access with a parking lot. A street sign east of Maritime Place along Salter Path Road identifies the entrance to McGinnis oceanfront property. However, most of McGinnis Point is further east and about half a mile north of Salter Path Road. You can get there by turning onto Pine Knoll Boulevard at the light and going past the entrance to town hall. Where Pine Knoll Boulevard ends, you will see a McGinnis Point sign.

Development began at McGinnis Point around 1982-83 and proceeded in stages throughout the 80s and 90s up to the present. Property owners first created a Master Association. Then, when they wanted to start building the Currituck units, they created an association. They did the same when they started the Pamlico units. They did not turn an association over to its members until certain conditions were met, for example until three-fourths of the units were sold. Last to be built were six Pamlico-style units on McGinnis Drive West. In 2009, M.P. Development, LLC, had some remaining properties there and was represented on the Master Association Board by Tommy Simpson and Attorney Richard Stanley.

So, McGinnis Point consists of one Master Association and two constituent homeowner associations: Currituck, which represents 26 town houses, and Pamlico, which represents 11 patio homes. However, these individual homeowner associations do not have active boards. They are largely responsible for insuring units they represent. The governing body for the entire area is McGinnis Point Master Association, which operates under established bylaws and a set of covenants.

McGinnis Point Master Association, contracting over the years with Crystal Coast Management Consultants (CCMC) is responsible for landscaping and maintains internal roadways, including McGinnis Drive, Lagoon Lane, West Court and West Road. Also under its care are three lagoons and a water treatment plant, which it has recently replaced. A boat ramp, boat storage area, one pool and two tennis courts are among the amenities. McGinnis Point also has an attractive website, www.mcginnispoint.com, which contains both current and archived information as well as helpful links to town and county websites.

CCMC representative Johnny Cameron describes McGinnis Point as “a tranquil community in a natural setting.”  Lagoons have natural borders—no bulkheads. Landscaping is understated—not highly manicured. Tall trees dominate the interior. Tennis courts have a view of undeveloped land with marsh on the western border. It’s an atmosphere in harmony with the neighboring aquarium property and Theodore Roosevelt Natural Area. 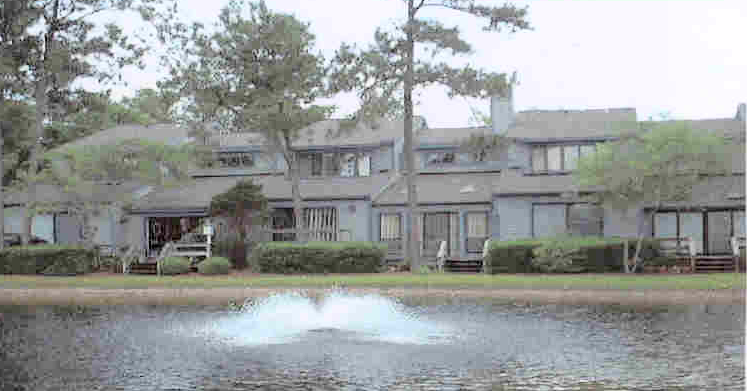 Photo of housing at McGinnis Point on one of the lagoons.

Only a small number of McGinnis Point residents live here full time, but most, according to Johnny Cameron, are from in state, so they can visit regularly. Their covenants and Master Association ensure the property is well managed at all times. When residents are here, they can enjoy access to both the sound and ocean. They can play tennis, go to the pool, spend time on the beach, or go out on a boat.
Long-time McGinnis Point resident Ahna Logan, who has a beautiful place overlooking Bogue Sound on one side and a natural lagoon on the other, says, “It’s heaven here.”  She especially loves the natural spaces that provide a habitat for egrets, heron, osprey, otters, and other wildlife.

Post Author: Phyllis Makuck (based on an article written for The Shoreline in 2009.)
To contact the author or the History Committee