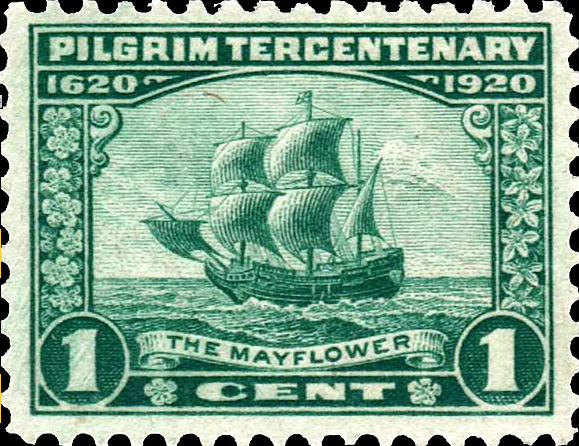 From time to time we’ve all had issues with the US Postal Service.  Late deliveries, misdirected mail, slow service, lost items or delayed pick-up, so we inquire at the window, complain, try to understand the system, hoping to make it work better for us.  But I never thought that the solution was to have my own Post Office -- Alice did!

In 1917, Alice Green Hoffman began acquiring land on Bogue Banks including a home-located midway between Salter Path and Atlantic Beach. She called her home Shore House.

With real estate and business interests in New York City and Paris as well as family and friends in the United States and Europe, she felt a strong need for regular, reliable and frequent mail service. In 1917, Shore House, which was on what is now Oakleaf Drive, lacked a telephone; in fact, it lacked electrical service. It was well into the 1940s before those conveniences arrived. The nearest telegraph office was in Morehead, down the street from the post office where she picked up her mail.


Her first application for establishing a post office on Bogue Banks was submitted in 1918 and was not acted upon. The following year, she submitted a more detailed application and was successful.  The application described the proposed office as being seven miles from the Salter Path office. The nearest mainland office was in Mansfield, three miles across the sound.

The Post Office Department established a post office named Bogue Banks located in Shore House with Alice Hoffman as the postmaster on July 12, 1919.  The department chose the name Bogue Banks, rejecting her choices of Hoop Pole or Hoop Pole Woods. It was announced in the Greensboro Daily News of July 15, 1919. 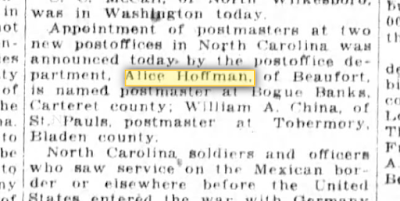 This was the second post office on the island. The first was established in 1915 in Salter Path, originally called Gillikin.  In the beginning, the mail was dispatched and received by boat from the Morehead City post office to Salter Path. Then Alice’s Bogue Banks office was added to the route. The service was three days a week, weather permitting.  Josephus Lewis used his boat the Rainbow for the mail run until he retired, then George W. Smith took over using his boat the Florabell.  In 1920 the mail-boat route paid $66.66 per month.

During her tenure as postmaster, she had discussions with postal authorities concerning the regularity and reliability of mail delivery.  She tried several times to convince them to establish daily delivery from Morehead City, all to no avail.

Starting in 1923, Mrs. Hoffman began buying land across the sound near the town of Mansfield, primarily to build a dairy farm. Her attempt at dairy farming on the Banks had proven unsuccessful. An additional attraction in purchasing land on the mainland was the possibility of improving her mail service. She thought that a ten-minute boat ride crossing the sound to the Mansfield farm and then a short trip by car to either the Mansfield or Morehead City post office would speed-up delivery and give her greater control over the mail service.

In 1926, the Post Office Department decommissioned the post office at Bogue Banks, and Alice lost her job as postmaster--the pay for which was determined as a percentage of the stamps cancelled. It is likely that she herself purchased the vast majority of the postage, so she was essentially paying herself. This position, which she had for six years, may have been the only paying job Alice ever held.

If the Bogue Banks post office had continued in existence, we would have the convenience of a nearby office, and Pine Knoll Shores may be named Bogue Banks. The history of what could have been.

Much of this story is based on material found in “A Postal History of Carteret County, North Carolina," by Charles Pitts. A good read for what would seemingly be a dry subject.
Newer Post Older Post Home