It is enlightening to put Alice and her life at Shore House in the context of the world of the socially prominent and well connected across the sound. The contrast is striking.

From the 1890s through the 1930s, Morehead City was a mecca for the social and political elite of the central coastal states. The resort hotels on the Morehead City sound front during that era had a reputation for fine accommodations and a lively cultural and party atmosphere. The lower summer temperatures and cooling breezes of the coast, when compared to the conditions elsewhere in the states, were a powerful attraction.

But, it was the expanding network of railroads that made travel to Morehead City a convenient and pleasant experience. In fact, the establishment of Morehead City was a result of the railroad’s arrival in 1858. 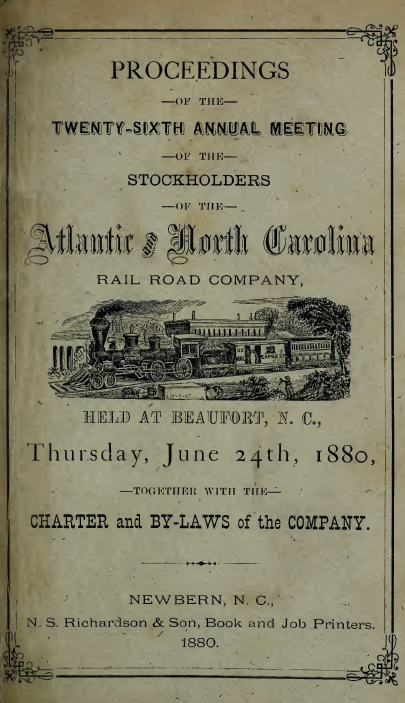 Governor John Motley Morehead spearheaded the construction of railroads in North Carolina during his administration in the 1840s. Railroads were connecting most metropolitan and not-so metropolitan parts of the state with a main east-west line. In 1858, The Atlantic & North Carolina Railroad terminated in Morehead City at the Atlantic Hotel, located between 1st and 4th streets on the waterfront.

While the Atlantic was the largest and most desirable resort hotel on the Bogue Sound shore, there were others catering to the fashionable clientele attracted to the Morehead City area. The Jefferson, New Bern House, The Cherry Hotel, and The Villa Hotel, all offered accommodations for guests wishing to get away from the heat of summer and unhealthy city environs. Some in the medical profession recommended the region for its restorative properties, considered it malaria-free and a place to go to avoid the fevers.

Where the wealthy, connected and fashionable go, the politicians are not far behind. The Atlantic & North Carolina railroad by the 1880s was connected to all the seats of power and government in North Carolina: Raleigh, Durham, Winston-Salem, Goldsboro and Charlotte. From the 1880s through the mid 1920s Morehead City was the summer capital of North Carolina.

During that time period governors regularly summered at The Atlantic Hotel. The Raleigh News and Observer had a correspondent who reported from The Atlantic, keeping its readers up-to-date with affairs of state and social gossip.

The Atlantic at its peak could accommodate up to 500 guests. The main building was constructed in 1880 at a cost of $35,000, a substantial sum for the time. It was reported to be one of the first hotels in the state to have running water.

In addition to the main hotel, it had a wing for nannies, nurses and other help who accompanied the elite clientele. It also had accommodations for men traveling alone; a row of one-room cottages provided them with privacy.

A physician on staff was standard for upscale resorts of the era, but the Atlantic also had a dentist as well. It also had a barbershop, a beauty salon and a telephone and telegraph room.

For recreational activities, in addition to bathing, sailing and fishing, the hotel also maintained a stable of horses and a pack of hounds for fox hunts. There was a room for card playing and smoking cigars as well as a men-only beverage room.

Separate dining facilities were available for young children and their caretakers, allowing adults to enjoy themselves, undisturbed in the main dining room. The hotel had a ballroom that was used many times during the season. An orchestra engaged for the summer provided music in the evenings, at luncheon and during high tea.

Throughout the summer, there were formal balls and theatrical performances to entertain guests. The social calendar was filled with cotillions, a Governor’s Reception, coming-out parties to introduce young ladies to society, costume parties and a Regimental Ball. It seemed just about any excuse was justification for a gala. 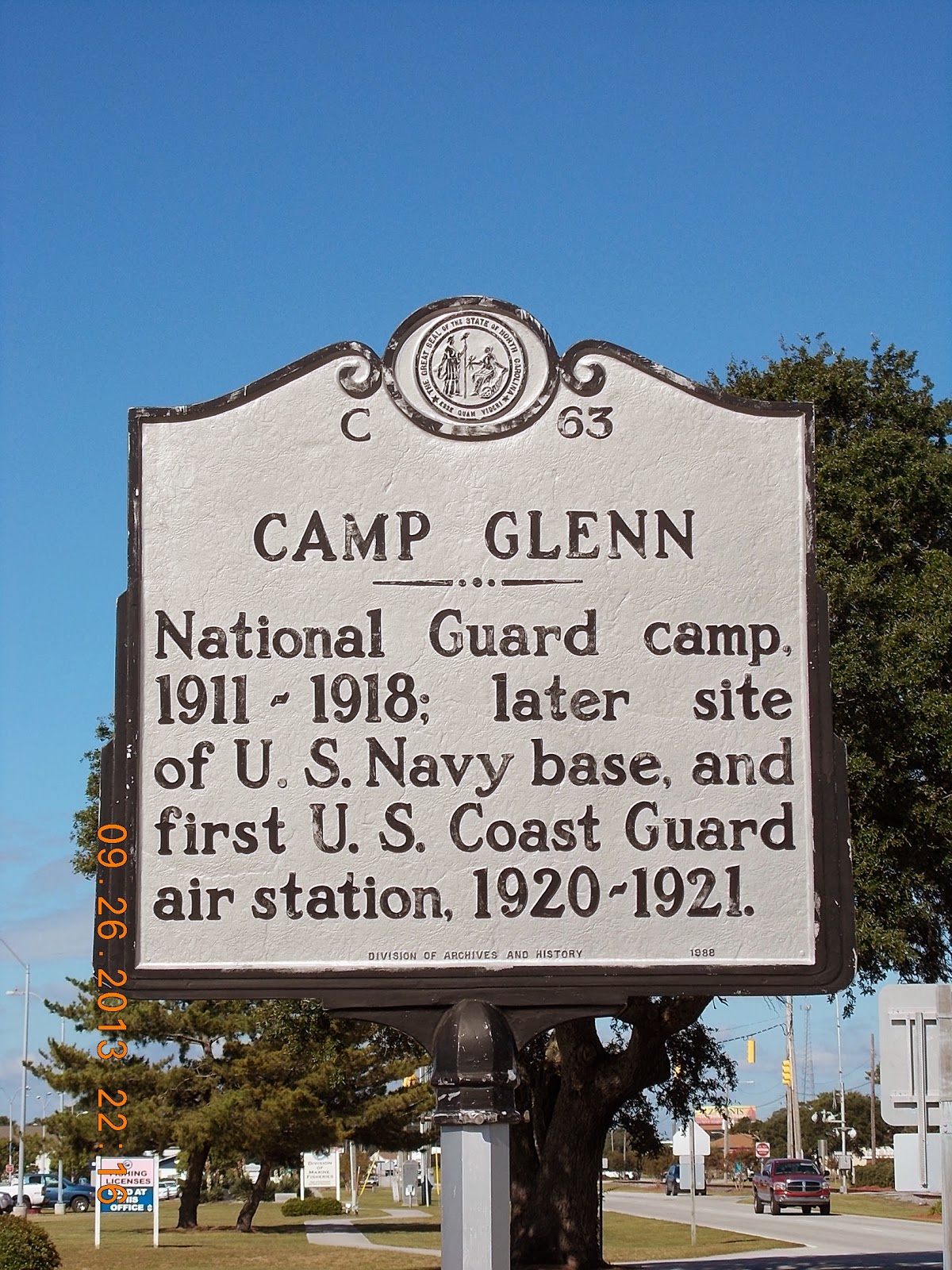 In 1906, the State Legislature selected Camp Glenn in Carteret County as the eastern training base for the NC National Guard. The facility was also used as a Coast Guard aviation base during WW I and a Navy base in WW II. Located just three miles west of The Atlantic Hotel, the base assured a steady stream of “officers and gentlemen” attired in dress uniform. They would partake of the fine food served in the dining room and attend the gala balls, a  fitting addition to the tuxedo-clad men. A young lady’s dance card would always be full.

As the attractiveness of The Atlantic Hotel began to fade, many of those who had summered there built cottages along the Morehead City Bogue Sound waterfront to continue their social traditions.  The era of the Atlantic Hotel came to an end in 1933 when fire destroyed the facility.
Few remember The Atlantic or are unaware of the fame and grandeur it brought to Morehead City in the early 1900s. The only acknowledgement of its existence is a fading highway historical marker on the access road to the Port of Morehead. 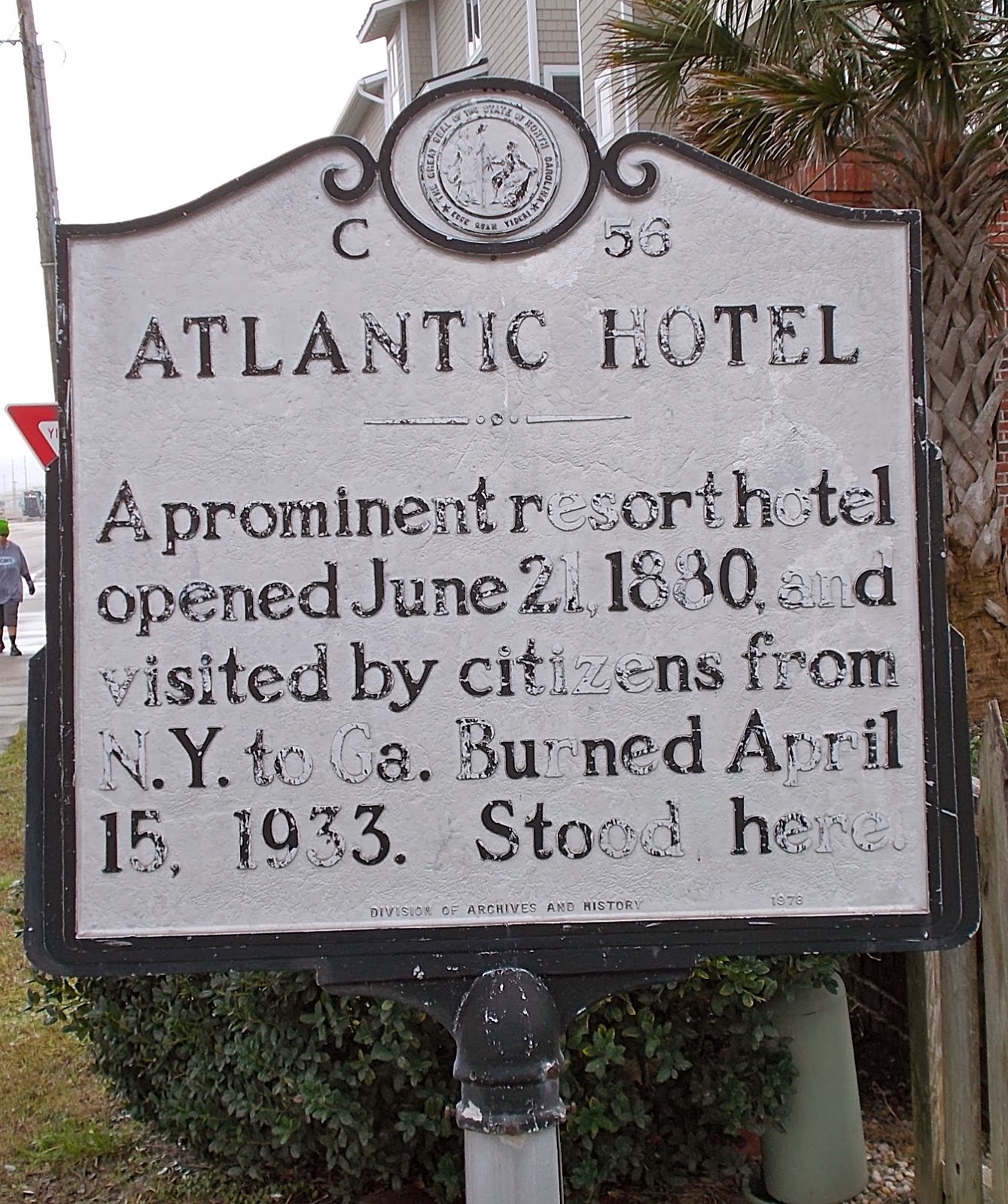 It is likely that the first exposure to Carteret County Alice Green Hoffman had was of The Atlantic Hotel as she stopped and, perhaps, disembarked at the station in Morehead in 1915. The ambience, fashions and culture at The Atlantic might have been reassuring. Granted the painted wood frame building would not compare favorably with the grand and opulent stone and brick structures on Park Avenue in New York City or Avenue du Bois de Boulogne in Paris, it still represented a touch of refinement and culture in a rural setting. If the registration books from the Atlantic had been preserved, Mrs. Hoffman’s name appearing among the guests would not be a surprise.

An alternate scene can be envisioned in light of the fact that in 1906 the Atlantic and North Carolina railroad was extended to Beaufort, where the train traveled down Broad St. to the depot at the corner of Pollock St. So, perhaps she sat on the train while it stopped at the Atlantic Hotel station and watched a large portion of the train’s passengers disembark. While the uniformed hotel staff assisted with their luggage, she sat there wondering if the accommodations could be better in Beaufort.

During that first visit to Carteret County in 1915, Alice Hoffman found land to her liking and in 1917 bought a large portion of her Bogue Banks estate from John Royall. When the family of John A. Royall of Boston, Massachusetts visited their Bogue Banks land holdings, which represented 75% of the island by 1910, they traveled by private yacht. It is conceivable that after the voyage, staying at the Atlantic was a welcome change from life aboard ship.

So, while Alice was living in a rather primitive style at Shore House, a short way across the waters a social scene reminiscent to her life in Paris and New York played out.