A certain amount of uncertainty and confusion exist around the location of Alice Hoffman’s house.  All evidence puts it on the north shore of Bogue Banks, west of Yaupon Point and east of McGinnis Point. Several people have claimed that remnants of her house are on their property. This post presents the stories, evidence and observable data as a basis for further discussion.

Her Homestead Was More Than a House

Alice had a residence on Bogue Banks from 1915 until she died in 1953. The first two years, she rented a cabin several hundred feet east of the cottage that John Royall owned. The Royalls referred to their place as a cottage or hunting lodge. They acquired the property in 1910, had the cottage built and shortly afterward a small cabin for a friend, Dr Allison, to use when he came to the Banks. In 1917, Alice Hoffman purchased 2,000 acres from John Royall that included the cottage and the cabin and any other buildings on the property. The one other building referred to in several contemporary documents is the oceanfront teahouse—the location of which is a mystery.

During the time that Alice occupied the land, she tried a number of business ventures: raising dairy cattle and beef cattle, produce farming, and harvesting lumber. She also raised hogs and poultry. For a period, her agricultural activities on Bogue Banks operated under the name Pine Grove Farms. Until the late 1940s, Alice’s house was what we would now call “off the grid.” Whatever comforts there were at the house had to be created onsite, including water, power and light. She lived well beyond the end of the asphalt, off a sand path, perhaps covered with gravel or shells.

Her agricultural activities and the conditions of her remoteness required many structures and outbuildings. Her fire insurance policy from 1926 covered the following structures on “Bogue Banks—main dwelling, farmer’s residence, gardener’s cottage, forester’s cottage, teahouse, easterly shore cottage, pump house, wood shed, store house, dairy barn, barn H, and barn J.”[i] Additionally, we know that a large cement dipping vat was on the property to permit the cattle to be fully submerged for protection against Texas Fever infection that caused cattle ticks. The livestock were periodically dipped in an arsenic bath[ii].

During the 1920s, she had a series of cement/brick terraces built near her home to plant a rose garden. From pictures, we know there were cement walks from her home to the sound side dock as well as wooden walkways.


The existence of remnant cement and brick masses is understandable, but what structure these artifacts were a part of is unclear.

Here’s how she describes her first view of the property in 1915: “The path up to the house was guarded on each side by a sort of rampart of cement, & between cement in its natural colour combined with ordinary 6x4s painted with the most divine shade of green which harmonized to perfection with the forest of pine trees all about.”[iii] So, cement and painted wooden slats formed a walkway between cement walls. Remnants of the cement wall and walkway may also be scattered in the area. The house that she refers to is Royall’s cottage, which she never occupied. By the time she purchased the 2,000 acres from Royall, she had already made substantial changes to the doctor's cabin and continued to do so. Some years later, her letters show that the farm manager lived in the old Royall cottage.

The history committee has gathered a collection of aerial photographs and period maps that help locate Alice Hoffman’s homestead.[iv]

The cleared area for the main house is roughly 500 feet from the left edge of the larger clearing for farming. A dock extending out into the sound is visible at the left edge of the farm clearing. Under careful examination of the original with magnification reveals the main house in the shape of an H on its side. The caretaker’s cottage is at the left of the large cleared area at the foot of the dock. Other farm buildings were probably in the southwest corner of the cleared area, and still others are scattered around the grounds, hidden in the forest.

On this 1941 US Army base map, the cluster of buildings located just above the “L” in POLE represents Alice Hoffman’s homestead. The map was updated in the late 50s showing unimproved roads of early Pine Knoll Shores. Note the WW II installations on the beach, Towers and Sta B 3, Battery 7

The clearing for the house has been expanded with the addition of a second clearing to the left, but the expanded forest canopy reduces visibility of the main house. 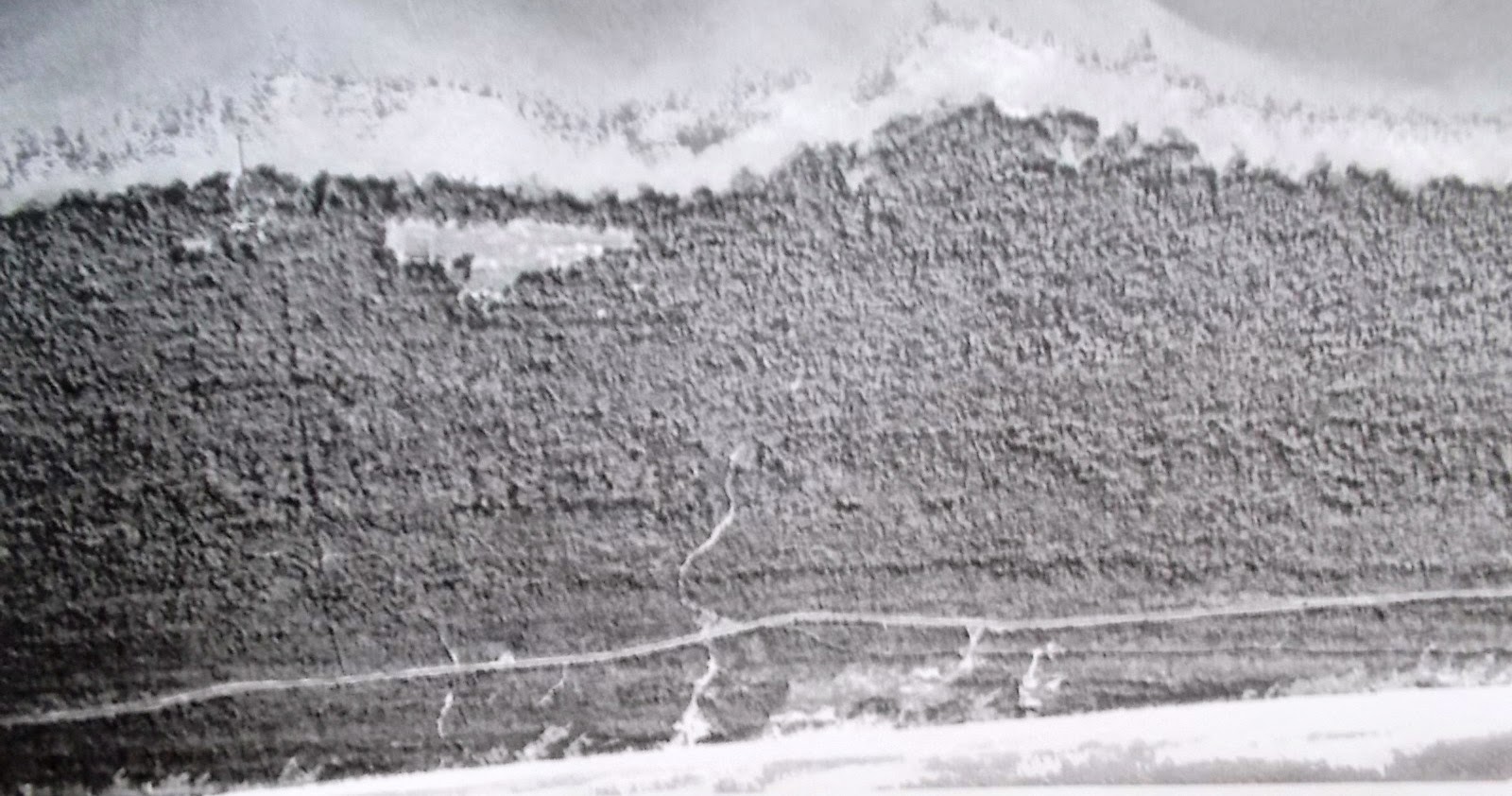 1953 enlargement, a dock is visible from the main house clearing, whereas the dock in the 1939 photo is no longer visible. Compared to 1939, forest growth is beginning to regrow in the farm clearing. 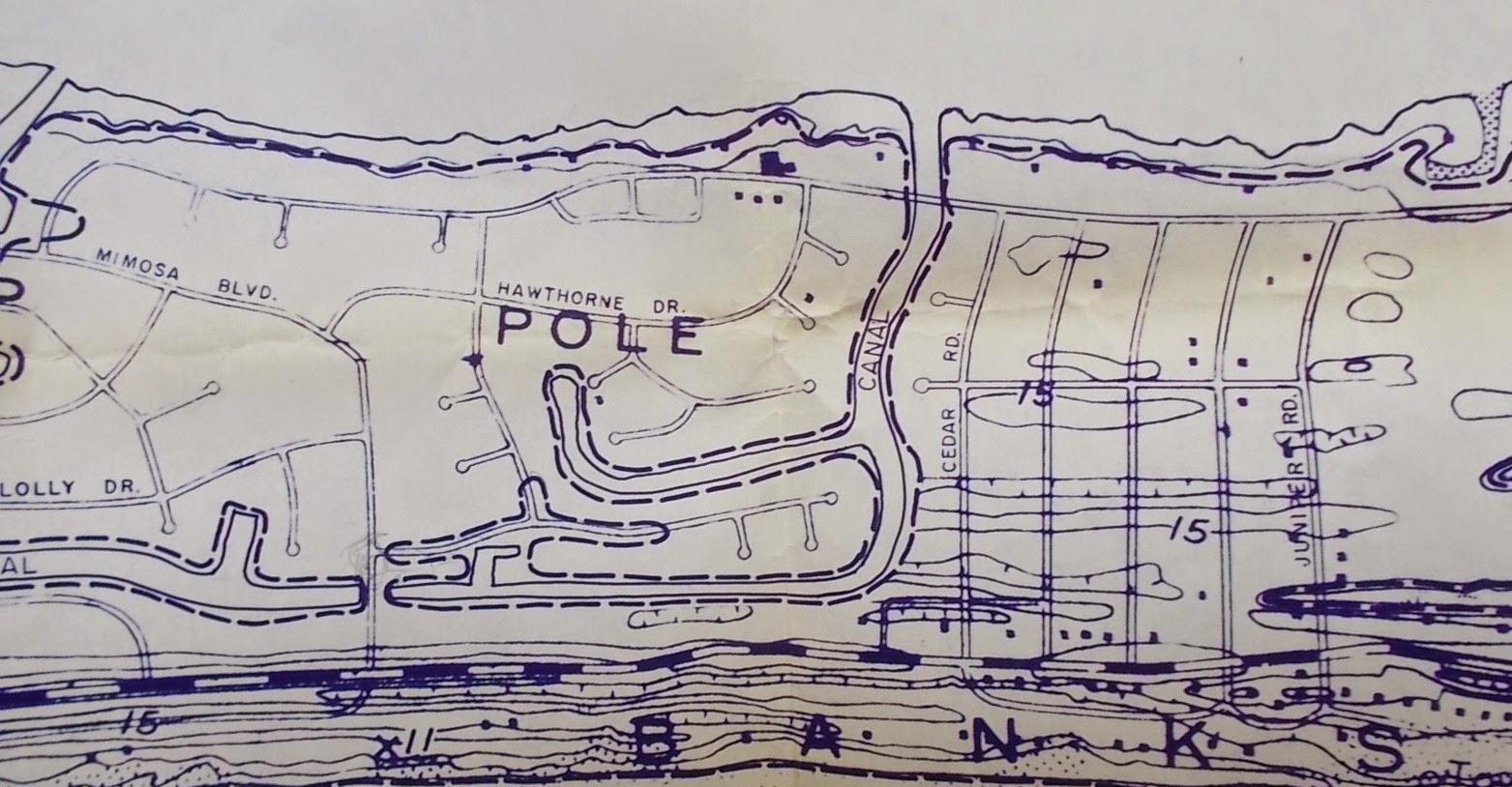 A presentation from the mid 1960s that used a 1940s base map as a starting point included several buildings representing Alice Hoffman’s homestead.

The 1964 aerial shows remnants of the Hoffman homestead, including the housing complex area. The cleared area for farming is starting to revert to nature, and an improved driveway runs north and south from Salter Path Rd. The early Pine Knoll Shores road system is taking shape, Oakleaf with the five north-south roads: Cedar, Holly, Willow, Yaupon, Juniper, and the crossroad Cypress Drive. By the late 1960s McNeill Inlet, the entrance to the Pine Knoll Waterway would be cut just west of these new north-south roads—to the left of Cedar. 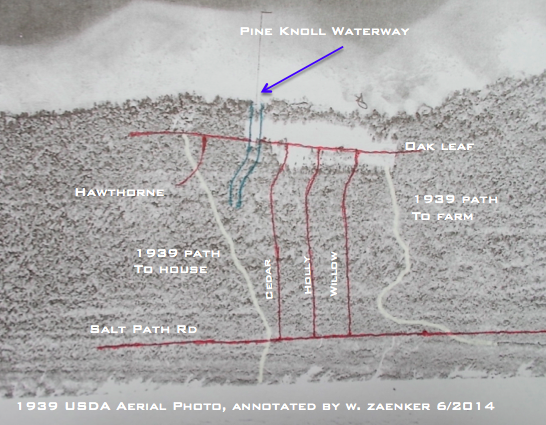 This is the 1939 aerial photo with paths through the forest highlighted in white, the current roads are located in red, and the McNeill Inlet entrance to the Pine Knoll Waterway is shown in blue. From this composite picture of “then and now,” it is reasonable to assume that some of the farm-related structures (caretaker’s house, barns, silo, etc.) could have been obliterated when the roads and waterway were built. The records indicate there were many other outbuildings scattered around the homestead that are not visible due to the vegetative cover of the maritime forest.

Lots with Remnants of Past Structures

Several locations in the Oakleaf Drive area purport to have remnants of the foundation of Alice’s House. This brings up the issue of, “What house are we talking about?”

In 1986, Hugh Kenneth Haller, Pine Knoll Shores second mayor, wrote a lengthy history article titled Town of Pine Knoll Shores, 1973—1985,[v] and in the preface, he discusses activities before 1973. He writes about Alice  Hoffman’s home as. . .”a rambling, but comfortable home. . .which included seven cellars.” It was “located approximately at what is now 214 Oak Leaf”. He goes on to say, “Her property had, in addition to her home, a caretaker’s house, a barn, a silo, a dock, etc.” In a footnote, he states: “In 1973, your author built a home on that site. The Hoffman house had been demolished, but the seven cellars remained.”

It is interesting to note that Ken Haller and his wife Newell Maverick Haller also owned 212 and 219 Oakleaf, which they sold in the early 1970s, prior to building on 214 Oakleaf.

George Eastland, writing for the Shore Line in 1978, said, “The house [Alice Hoffman’s house] was an intricate part of the fabric of Bogue Banks and in retrospect—especially in the view of many—its razing was a loss to the island.” He had learned that the Hallers built their home on the site and quoted Ken Haller as saying they had built over remnants of thick cellar walls. Today, another Oakleaf Drive resident calls this site home. 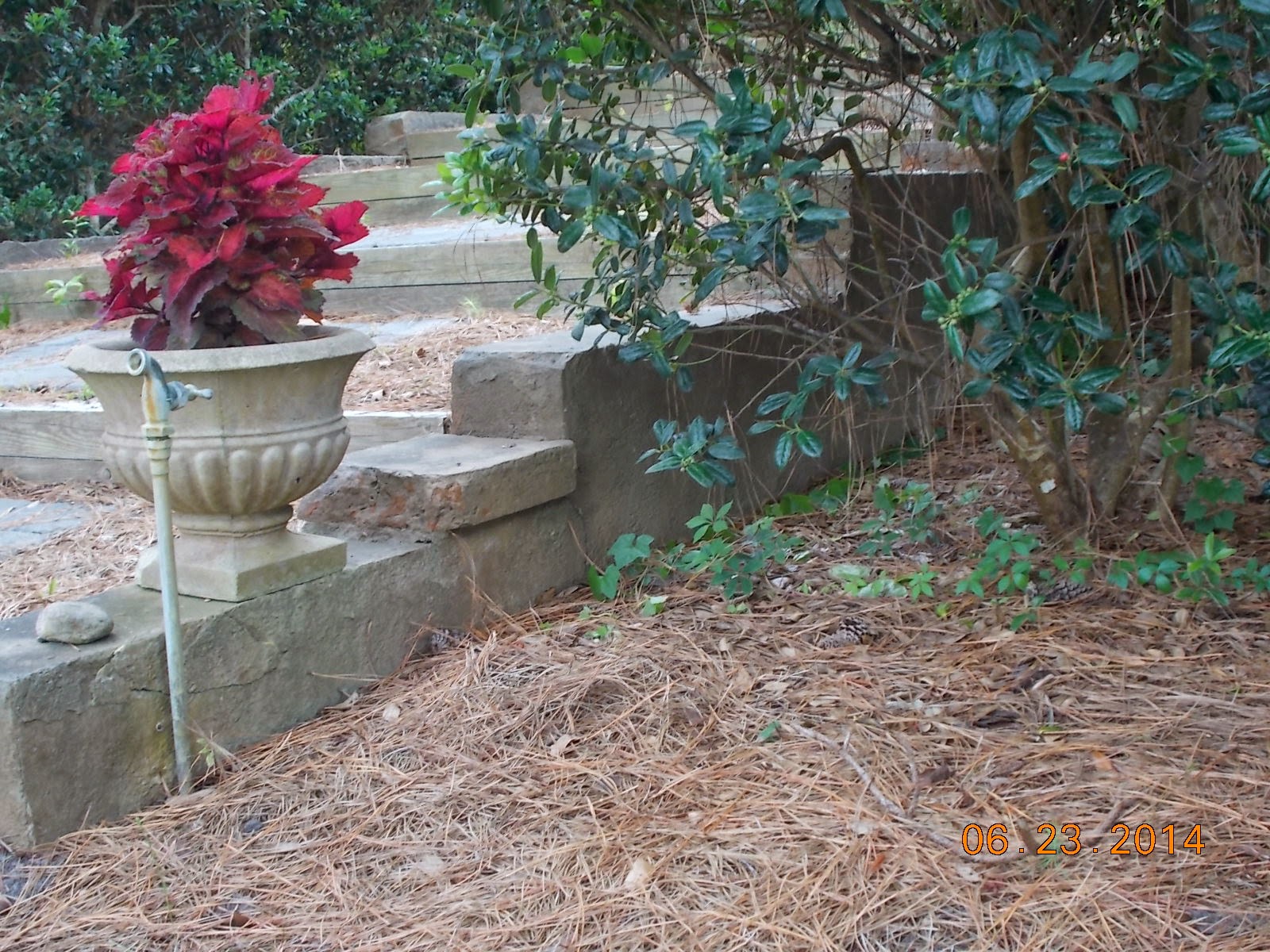 We now know that both Haller and Eastland were mistaken when they said Alice’s house “had been demolished” or “razed.” (See “A Tale of Two Houses” post.) Elements of the homestead were auctioned, and at least one portion was relocated three times and now exists as a well-cared-for home in Salter Path. Could Haller be mistaken about the exact site of the house as well? During the 1960s, Jimmy Powell of Beaufort worked with Charles King who was one of the surveyors who laid out streets and lots in Pine Knoll Shores. I had a telephone interview with him in November 2013 about landmarks on Bogue Banks. I asked him if he knew where Alice Hoffman’s house was? He stated that he remembered it being on Oakleaf about 500 feet west of the canal. About 500 feet falls at address 208 to 212. 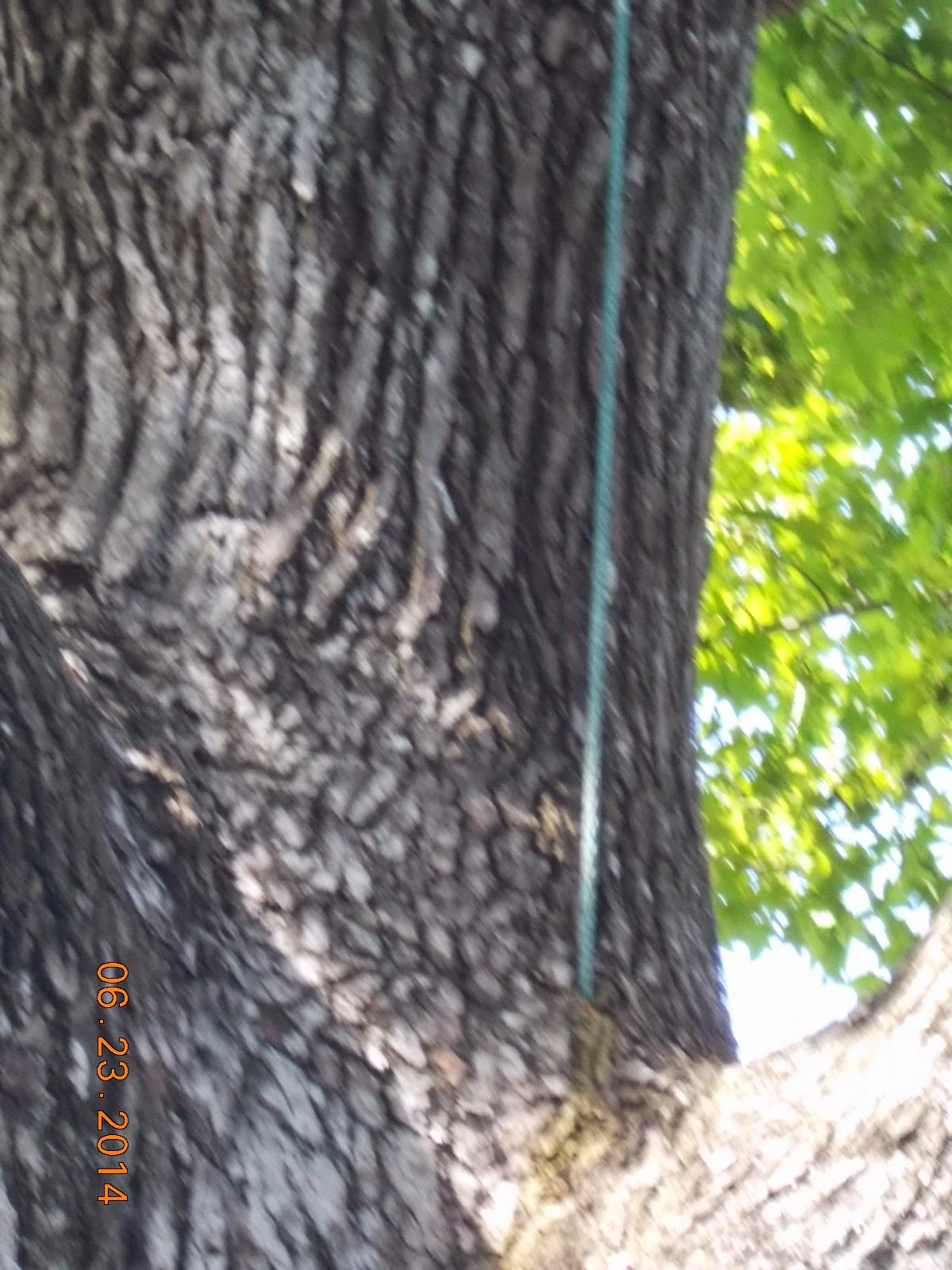 The property on Oakleaf in addition to having remnant cement work also has several large old Live Oak trees one of which has part of a lightening arresting system still exposed. The tree has now overgrown part of the copper rod and cable system installed in the 1920s at Alice's direction.

Based on evidence currently available, the main house was centered around Oakleaf addresses 212 -216, with other structures scattered in a 300-500 foot radius of the main house. The farming and livestock activities were probably on the east side of the Pine Knoll Waterway, conceivably extending as far as the Juniper Road area.

If any readers suspect a remnant exists on their property, please contact the History Committee mailto:pkshistory@gmail.com. Working together, perhaps, we can determine what part of Alice Hoffman’s homestead it represents.