In the 1970s and 80s, the Roosevelts sold off property for development, primarily condo development, but they held on to the property that would become Beacon’s Reach. Proceeding on what would be their final project on the island, they created a new corporation in the form of a homeowner association for each section under development. A Master Association, working with its various constituent HOAs, would be responsible for internal roads—their paving, lighting and parking enforcement—for waste-water treatment as well as for parks, marinas, tennis courts, pools and other amenities. Consequently, the most complex homeowner structure in Pine Knoll Shores emerged with the development of Beacon’s Reach. 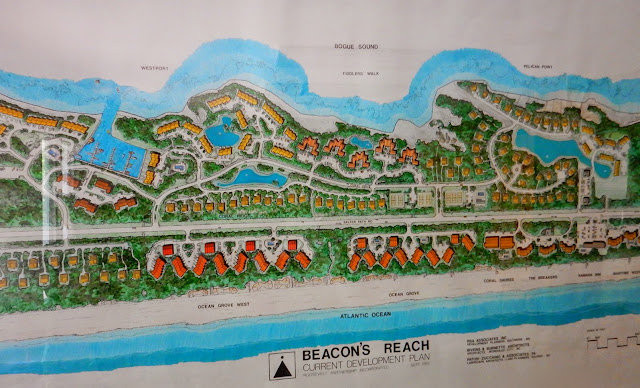 In 1975, the Mansfield family bought property in Pine Knoll Shores and began building an inn that became a Ramada (now the Clamdigger). Further west, the Episcopal Diocese of East Carolina already owned property that would become the Trinity Center. On a stretch of land consisting of dense maritime forest, north and south of Salter Path Road from Trinity Center property to Mansfield property and beyond to what would become Maritime Place, the Roosevelts began a major new development, adhering to the strict conservationist principles followed in developing central Pine Knoll Shores.
The Mansfields had used for their inn only the westernmost oceanfront tracts. Their property extended east of the inn and also included a lot across the street, where the wastewater plant, which was approved by the state, is located. Retaining rights to hook up to the sewer system, they sold this property back to the Roosevelts around 1977, and it became part of the western development of Pine Knoll Shores, now known as Beacon’s Reach—appropriately named since Cape Lookout’s beacon does indeed reach this point.
So, with Maritime West, Maritime Place and the wastewater-plant land, the total area of Beacon’s Reach is about 200 acres—1.62 miles of oceanfront property and one mile of sound-front property. The total area represents slightly less than one-sixth of Pine Knoll Shores.

A.C. Hall, who had designed the central section of Pine Knoll Shores had officially retired as Raleigh city planner and did not want to take on another big project. (See post on "A.C. Hall.) So, two landscape architects were hired to work on the new project, Larry Zucchino and Barrett L. Kays.

Initially, the Roosevelts sold options for this property to a group of developers, Ocean Grove Associates, who were also working on McGinnis Point. But, that arrangement did not work as anticipated, so the Roosevelts bought back those options. 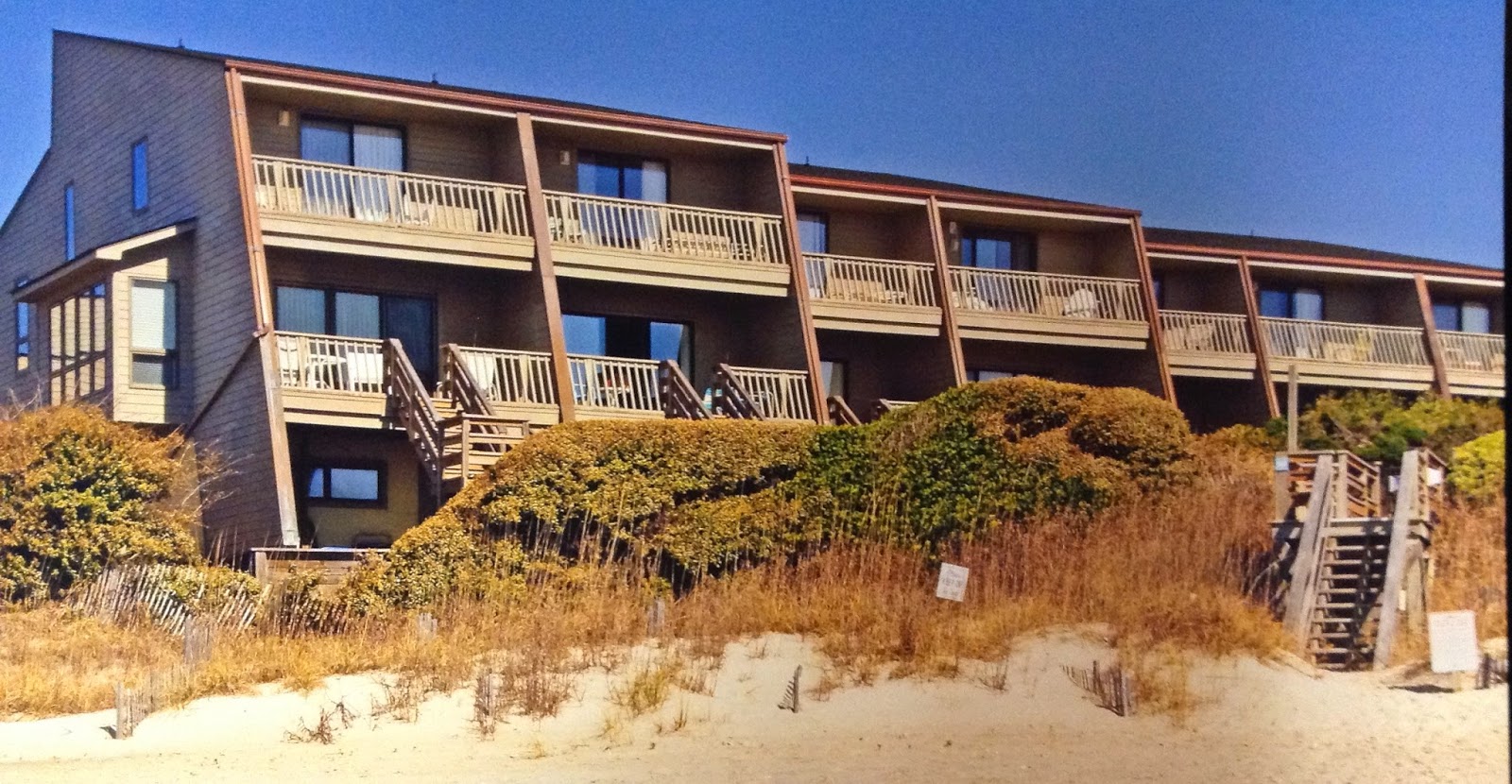 Ocean Grove, Photo from Collection in Beacon’s Reach Property Management Office
Don Brock continued to represent the family in Beacon’s Reach. Playing a pivotal role, he worked for the Roosevelt family and also worked for the association. This relationship was a model for future Beacon Reach development.
The Roosevelts made decisions on ocean and sound sites based on how property was selling. Ocean Grove started in the 1978-79 timeframe and was completed in 1983. Ocean Grove West was started in 1983 and completed in 1986. In 1980, work started on The Breakers, on the ocean side, and Westport I, on the sound close to the marina. By 1982, The Breakers and buildings A and C of Westport I were completed, and Westport III started going up. When that project was completed in 1983, work began on Westport IV. Back on the ocean side, Maritime West went up in the 1984-86 timeframe while, on the sound, work started on Fiddlers’ Walk. 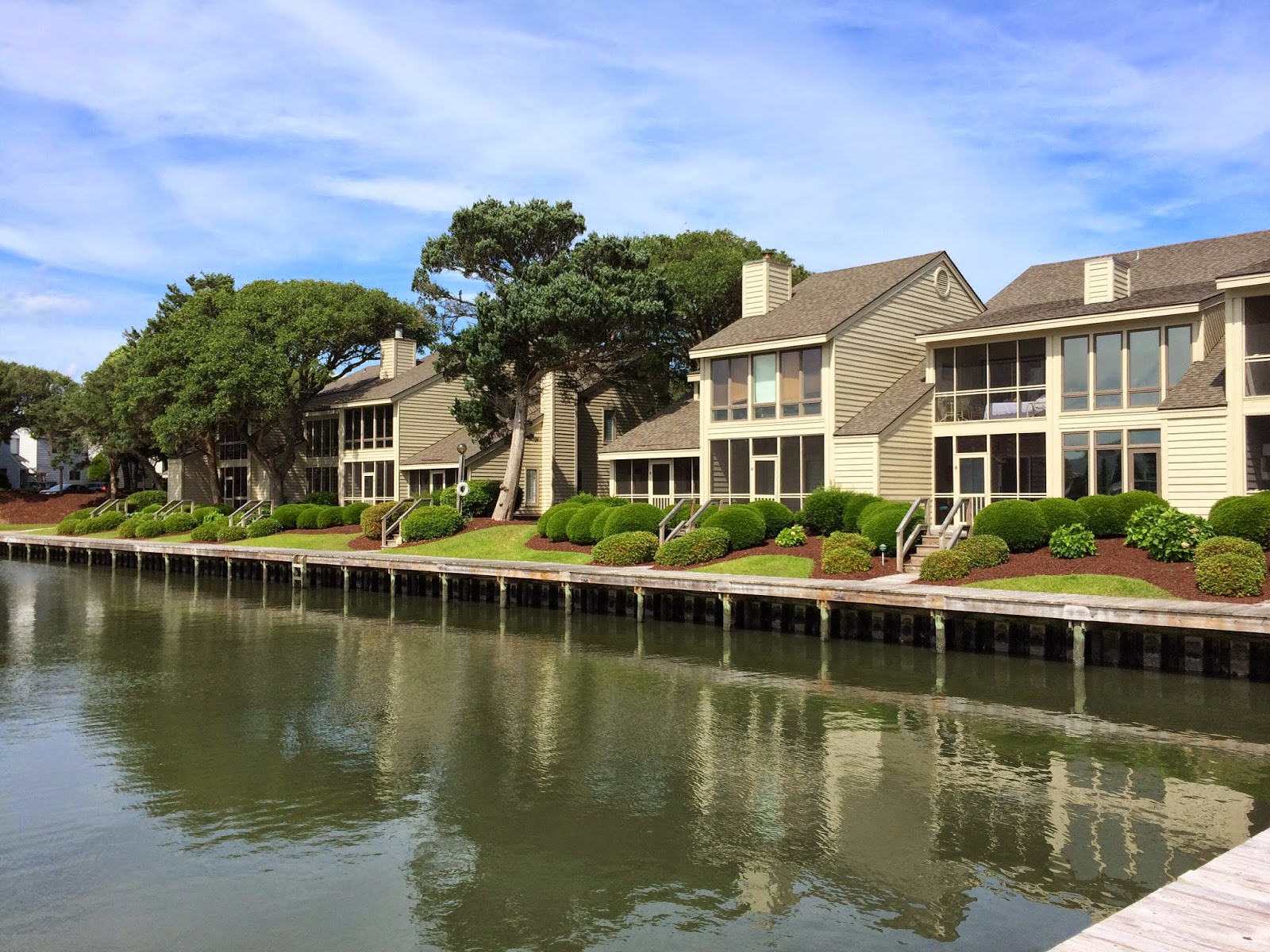 Westport I photo by Justin Brett, May 2014
Until 1985-86, Maritime Place was the only section in Beacon’s Reach with single-family lots, so 41 lots there came under Maritime Place Homeowner Association. All other property was for condos, each complex with its own homeowner association. Early on, condos sold quickly, but when sales began to slump in 1985-86, the Roosevelts decided to convert some areas to single-family lots, which all came under Beacon’s Reach Single Family Association. The last area to convert was Fiddlers’ Walk, which became Fiddlers’ Ridge.
The resulting HOA structure is as follows:

Note: All names in bold represent separate HOAs under the Master Association.

It was not until 1983 that the Roosevelt Trust became incorporated as Roosevelt Partnership, Inc. Six years later, Roosevelt Partnership, Inc. completed its work at Beacon’s Reach and turned management completely over to the Master Association and twelve constituent homeowner associations. Before leaving, the Roosevelts gave Beacon’s Reach Master Association $180,000 for future sewer needs, $110,000 for Egret Lake Pool, the Westport Port Pointe area between the marina and sound (a lot valued at $350,000 in the late 80s), enough money to buy the Beacon’s Reach administrative building and, most importantly, a set of covenants and eco-friendly development principles responsible for the appearance of Beacon’s Reach today. 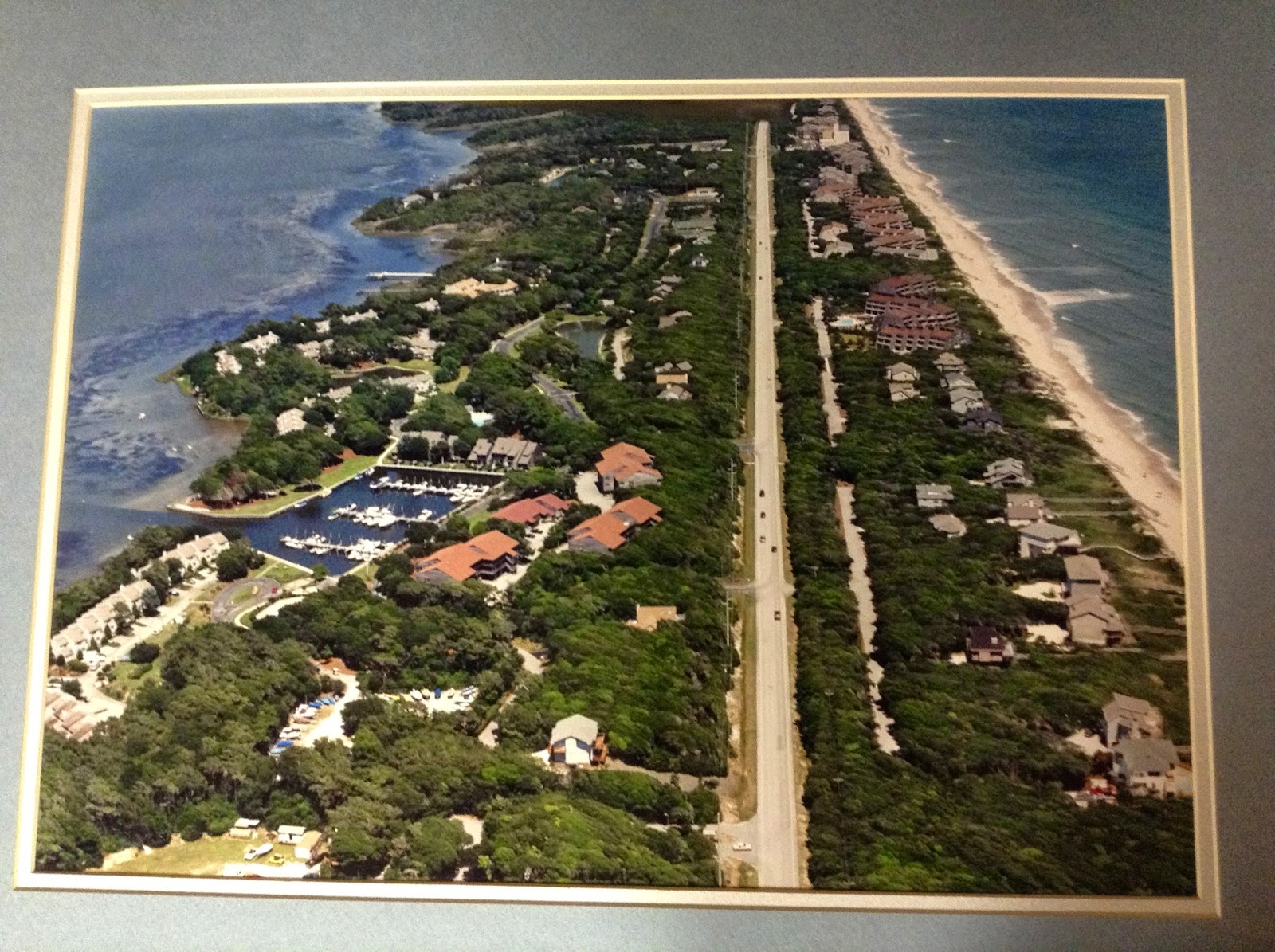 Single-family homes continued to be built throughout the 90s. By the turn of the century, very few lots remained undeveloped. In total, Beacon’s Reach consists of 466 units—321 condo units and 145 single-family lots. As in eastern sections of Pine Knoll Shores, developers and property owners have taken great care to maintain the maritime forest, so homes are not visible or are just barely visible from Salter Path Road. 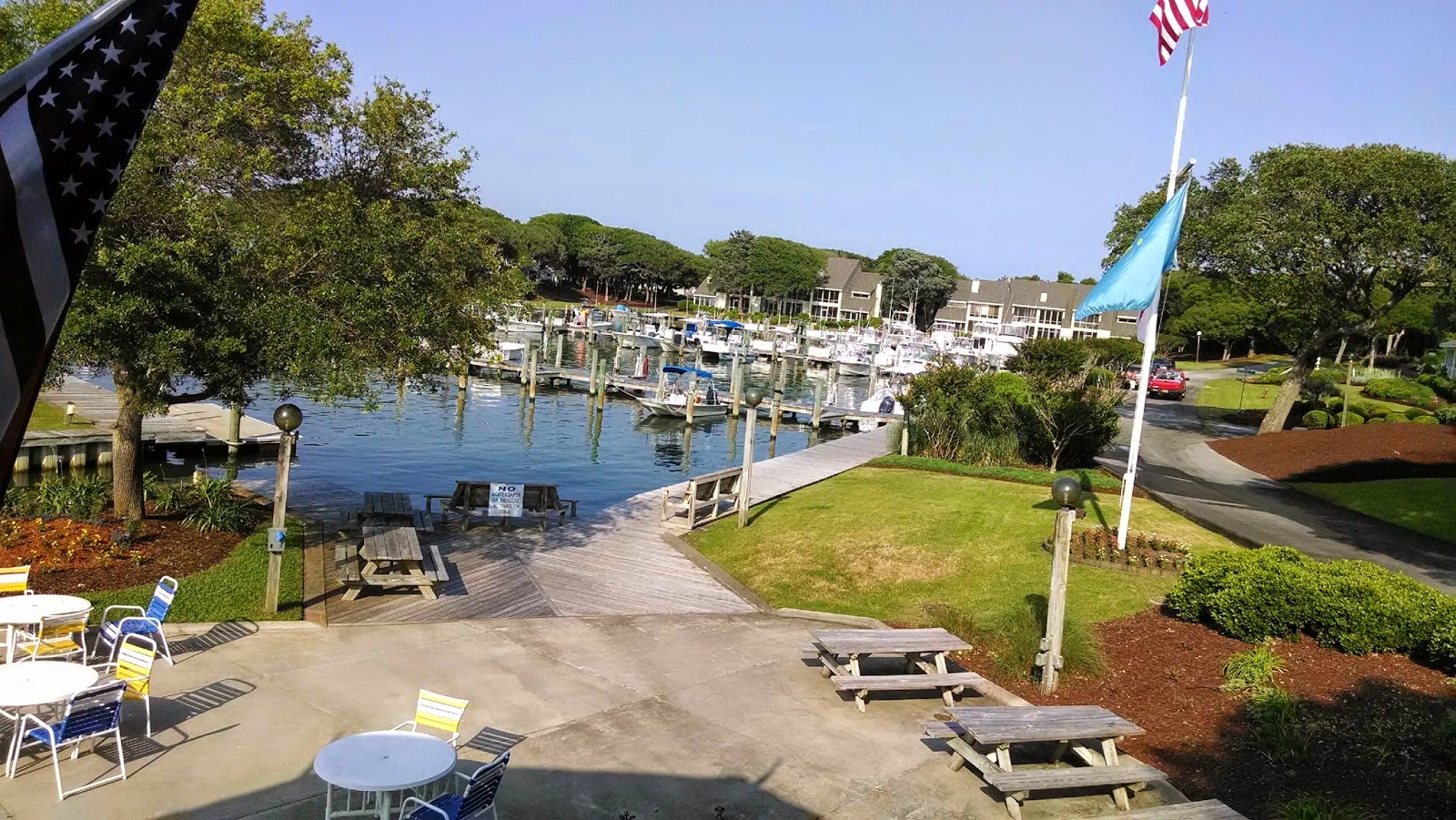 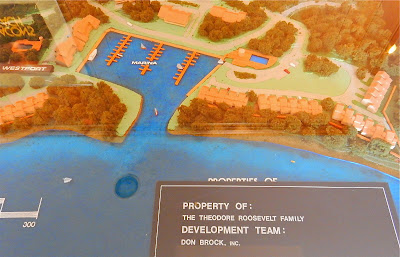 Portion of an architectural model of Beacon’s Reach, featuring Westport complex with marina.
Water access is one of the Reach’s main attractions. It has over a mile and a half of ocean beach, a 60-boat marina, a lake, and two large ponds. It also has nine pools—three on the north side and six condominium pools. Each ocean-side condominium has decks with walkways and steps leading to the beach, as do oceanfront homes. Sound-front condos and homes have their own water accesses. The Reach also provides all residents and their guests with three walkways to the ocean and two to the sound. It provides the public with four beach access points. Additional amenities include seven tennis courts, two basketball courts, and one playground for children.
Beacon’s Reach maintains about three miles of internal roadway and has security guards on patrol. Parking is restricted to residents with parking stickers and to cars with guest permits. Public beach-access parking is currently available across from the Clamdigger Inn and across the street from the entrance to the Trinity Center.
Known for its attractive landscaping, Beacon’s Reach has crews maintaining grounds throughout the week. On the north side of Salter Path Road is a water treatment plant, not the original system but a new one, which is large enough to accommodate the population it serves. Treated effluent from the wastewater treatment plant is reused for irrigation purposes.
Long-time property manager, Grady Fulcher, describing Beacon’s Reach residents, says, “They are typically a married couple in their early 50’s to early 70’s.” He estimates that fewer than 10% live here full-time. Most of those who do not live here full time have permanent residences elsewhere in North Carolina.  A smaller number come from out of state.
Seasonal activity levels vary considerably in and around Beacon’s Reach, but being one of its full-time residents, I can tell you there is a serenity here all year round that comes from the natural setting, understated landscaping and intelligent layout—all a legacy of the Roosevelt family. Because Property Manager Grady Fulcher was a former employee of Roosevelt Partnership, Inc., and had Don Brock as an on-site boss, he and our homeowner associations have carried on that legacy.
See separate posts for other homeowner associations, such as PKA, PIKSCO, McGinnis Point, Beachwalk, Bogue Shore Club, etc.