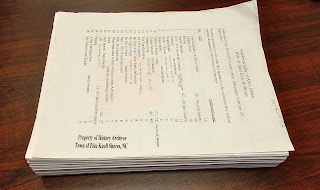 Alice Hoffman has left us about 200 pages of an autobiography, which she seems to have written and had typed for her in the 1940s. The manuscript is divided into titled, stapled sections—two of which are handwritten. It’s difficult to put them in chronological order, but her words increase our fascination with her.[i] Here are some observations about the structure, style and content of Alice’s autobiography.

Although Alice Hoffman divided her autobiography into sections, the content of those sections is sometimes repetitive. She writes as thoughts come to her mind, jumping from period-to-period, subject-to-subject and place-to-place, using very few dates. Her style is casual—as though she were writing to a close friend known for years, someone who is familiar with all the people she knows and the places she went. The syntax and vocabulary are products of her privileged education in the late 1800s and are colored with Victorian aristocratic embellishments.

From Alice Hoffman’s autobiography, we can gain a small degree of insight into her thinking and sense of reality. However, we must remember she was writing long after most of the people and events she chronicles have passed. She tries to focus on the positive, the good times, but, occasionally, darker thoughts emerge. She also sometimes provides various versions of events.

There are some striking omissions. She says nothing about her marriage or her divorce. She admits never having ready cash and does mention several of her law suits; however, she gives little hint that from 1910 on her life was filled with an ongoing, overlapping series of legal conflicts that spanned North Carolina, New York City and Paris, France. She also does not discuss events leading to creation of the Roosevelt Trust in 1944.

In spite of the omissions, she does reveal, through self-observation, elements of her personal worldview. For example, she mentions in several places that personal liberty is highly important to her. In rejecting a suitor’s proposal, she explains:

I did not want to marry anyone.

I told him I wanted to travel, study, be something, understand life, before making any decisions.

I have often wondered what I would have been like, had I not been financially independent. It must make a tremendous difference in a girl’s point of view. 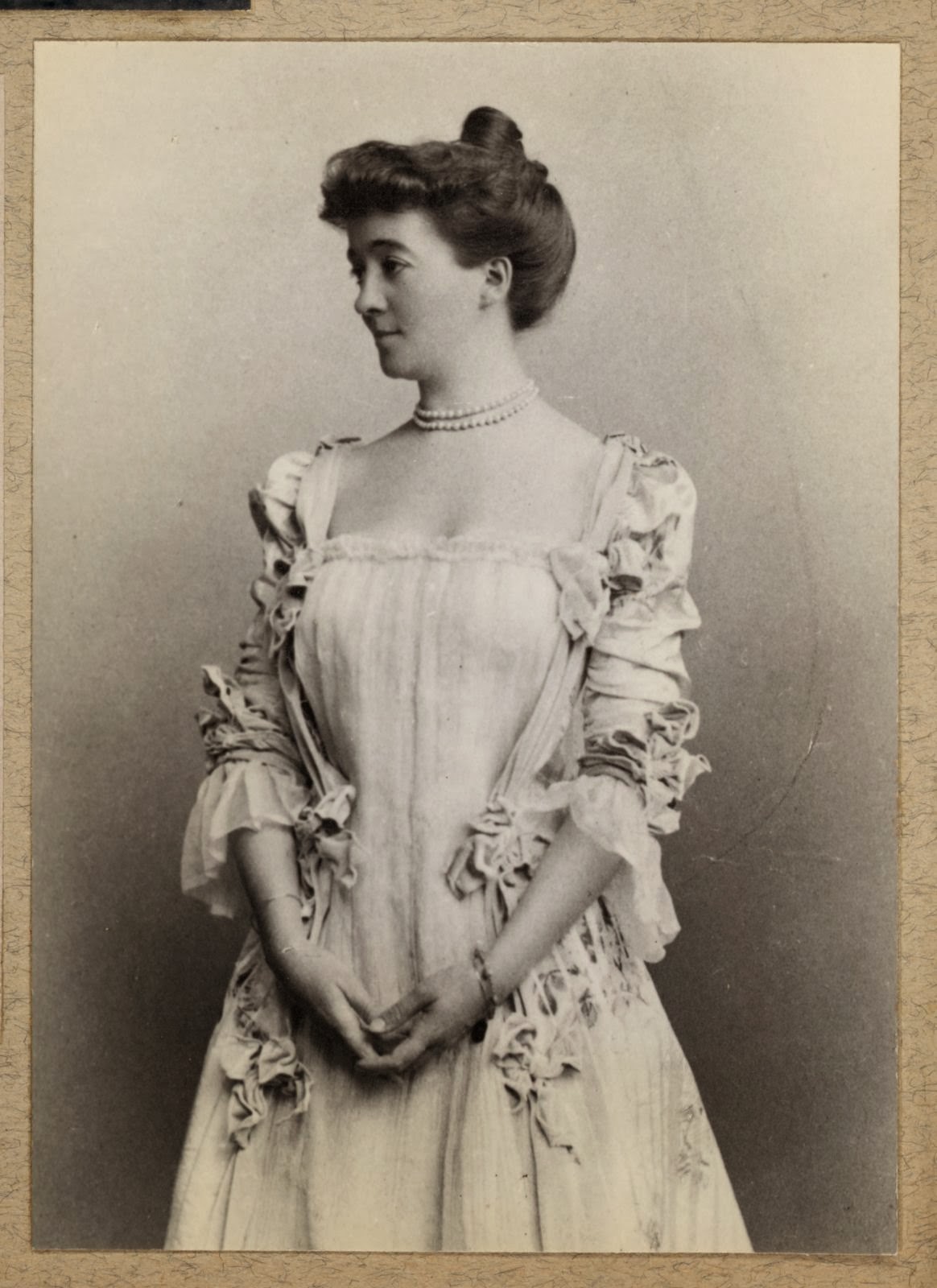 She did, however, regard herself as attractive to men, had many suitors before she married and mentions several marriage proposals. She still feels she has these charms when she meets John Royall. She claims that like most men he liked spending time with her:

…it was being said that his wife was jealous… except that it seemed beyond the possibilities that any one should conceive that I would wait until I  had arrived at my already advanced age [55] to come down to this remote wilderness to try to decoy another woman’s husband.

In explaining her passion for remodeling, she assesses her behavior:

I was never content without some purpose to be achieved.

I see the vision and can give the working plans which make it a reality, but someone else must attend to the details.

In looking back on her upbringing and family support, she says:

There was never the smallest atom of “Expediency” either in my family or myself throughout my life.

Nor was the desirability of position, alliance, acquaintance or wealth ever mentioned.

We were singularly free to look facts in the face and judge them.

She speaks about her desire when younger to have children:

I was most anxious to have a family of children to bring up, for I am convinced that I should have known how to develop them to their best expression.

I am sincerely grateful that my faults and virtues will die with me.

She then goes on to bemoan the “disagreeable” state of the world:

…the unbridled opportunity of Governments to increase the difficulties of existence, by taxation, compulsory military service, increased cost of living, I am glad that all those little souls that I wanted to gather around me are still waiting for a chance to be born, where I hope that they are still free and not slaves as we are.

Realizing that she seems to jump from residence to residence and has lost so many of the places she has lived, she says:

It strikes me as rather pathetic that I should have built so many nests, only to find that I must choose another tree. 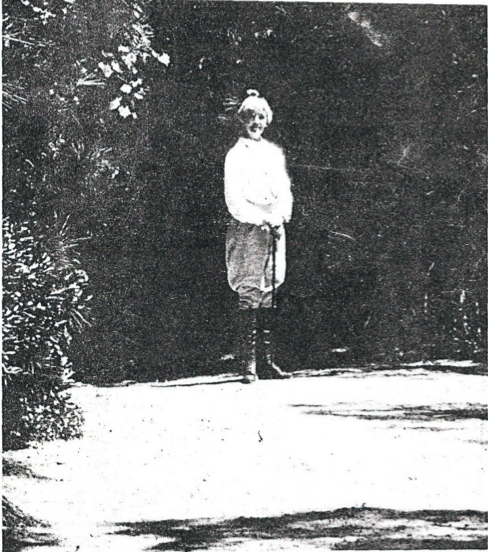 Alice in jodhpur-like pants with cane, taken, it seems, around her Bogue Banks home. She often mentions walking in knee-high calfskin boots, which she also wore in Canada. Here, they provide good protection against snakes. [iii]

Her feelings about Bogue Banks are at best mixed. At one point she says:

Nothing can ever describe the wonderful feeling of the summer air when driving on the Beach. It is actually caressing, and seems palpably to envelop one, and the wonder of the moonlight has sometimes kept my eyes open through the whole night.

But, she finds the violent electrical storms frightening. And, it’s not just the weather she finds frightening. She keeps two pistols, one on each side of her bed, in fear of intruders who might do her harm.

Her Uncle Henry is the only family member who visits her in North Carolina on more than one occasion:

…he was the only member of my family who ever appreciated or benefited from the place….

Her friend Edna Ryle, from summers Alice enjoyed in Canada, is one of the first friends to visit. She arrives when Alice is still remodeling. The weather, initially beautiful, turns very cold. They no longer have running water, the fireplaces are not well vented and the construction noise is annoying. 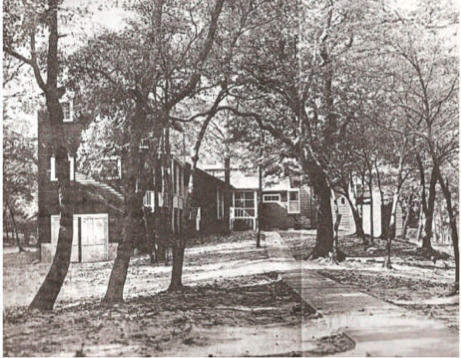 This view of Alice’s Bogue Banks house gives some idea of what it may have looked like when Edna visited. [iv]

When Alice’s cousin Nancy comes to Bogue Banks, it’s mice that mar her visit. She describes her sister Mary’s “first introduction to my forest” as being:
…not what I could have wished. Mary got overheated walking the two miles which separate the house from the Beach and ….a breeze on the verandah of the Teahouse added to her cold. On the way back we ran across one of the wild boars which roam at will on the island.

And, then, when Mary is getting ready to leave:

The weather had capriciously turned into a N.E. gale….

Alice’s niece, Eleanor, also makes one disastrous trip and never returns. One successful outing with Eleanor involves going to Shackleford Banks, where Eleanor took pictures. But, when Eleanor tries sitting in Alice’s dining room to write letters to her children, the mosquitoes are vicious.

Alice wanted to be reassured by Eleanor’s comment that Bogue Banks would make a “wonderful place for Gracie to spend her honeymoon,” but, alas, that does not happen. However, Alice makes one of her strongest cases for living on Bogue Banks following her recollection of this prospect:

It was a wonderful place, …one of the last remaining retreats, isolated from all the world & its fripperies. No telephone, electricity, radio, or noise….

But then, she follows with a description of the severe weather she endured her first year as property owner here:

…the hurricane in the summer of 1917, the blizzard that year at Christmas, & the terrific thunderstorm the previous year.

Before 1941, Alice spends a good deal of time away from Bogue Banks. While she is away, her property is damaged and mismanaged—rose gardens not maintained, strawberry patch trampled, property taxes and utility bills not paid:

She blames irresponsible people here for these troubles—

… their ignorance, lack of obedience, and care.

If she made friends in North Carolina, she does not mention them. She does say that in her first year on the island, she never went to the mainland. Most of the people she interacts with are in her employ.

The happy times she discusses include a summer stay with Ohio relatives when she was eight; days in Farmington, CT, at Miss Porter’s School for Girls; summers at Southhampton, NY, and Newport, RI; early European travels; horseracing days in Paris; summers in Canada; her first visit to Bogue Banks and her trip to China; the companionship of Polly, her parrot. Some of these will be subjects of future posts.

Also, based on the autobiography, changes appear in previous posts such as “Why Alice Came to Bogue Banks” and “The French Connection.”