Before GPS, charts, maps, and road signs were readily available, features of the landscape were the guideposts that helped people travel on land and navigate on the waters. They were a key piece of shared local knowledge. At the time, they were so well known and accepted as common knowledge that they were a fundamental part of legal documents and deeds.  This is the story of the search for and identification of those nineteenth and early twentieth century landmarks on the eastern portion of Bogue Banks.

The beginning of this quest is discussed in Deeds, Part 1 of 3 which pointed out that deeds in the 1800s and early1900s were written out in longhand and used landmarks as reference points in the “Metes and Bounds” descriptions. Below is a summary of the deeds and agreements that relate to Mrs. Hoffman’s land acquisition on Bogue Banks from 1917 through 1927, along with related transactions that shed light on the locations. 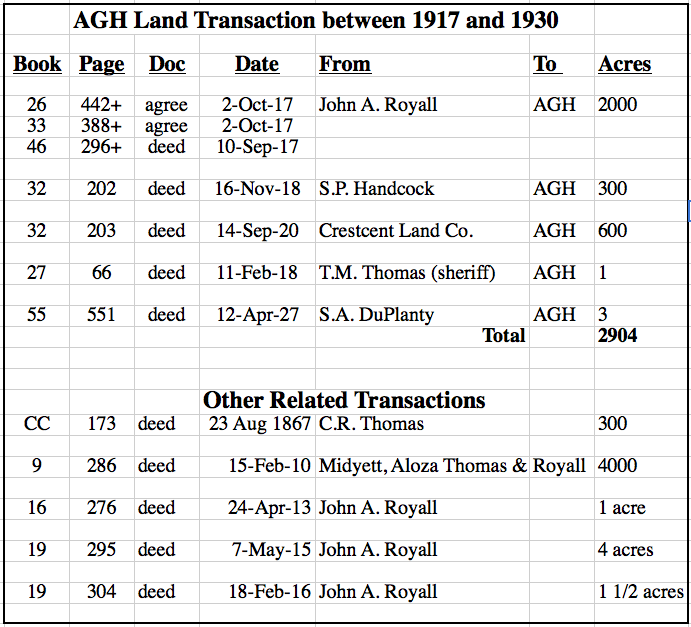 The key landmarks referenced in these deeds are Yaupon Point, the Lowenberg Line, the Spire in Salter Path, Hoop Pole Creek/Bay/Point and the Abonita properties.

The three-part map presented here is based upon the author’s research of historical documents, maps, books and papers. These paper records were supplemented by discussions with local residents—some with firsthand knowledge (when I was young we called it such and such) and others with secondhand (my folks told me).  As a result of this effort, a picture is beginning to come together. There are probably other landmarks that should be added, and the exact location could use some refinement in some cases. (Please let me know if you have any helpful information you would like share.) As better-documented and verifiable information surfaces, we hope to improve the presentation. This is my current understanding. (Google base map annotated by author.)

Landmarks from East to West
Following is a brief discussion and story about each landmark, its derivation and how the location was determined.

Atlantic Beach – The western town boundary was established when the town was incorporated in 1937. From the 1890s until incorporation, that boundary was the western property line of the land owned by various individuals who developed the resort of Atlantic Beach.[i] This boundary line remained unchanged until 1965 when a series of annexations began. The impact of that original boundary is visible today by the abrupt ending of roads and canals.

Hog Hill Creek – There were a series of low hills or hummocks on which a dense stand of hickory and live oak trees grew and produced strong crops of nuts and acorn each season. This source of nourishment made the location very attractive to hogs and other animals. Some of the hills were leveled when Fort Macon Rd. (Rt. 58, or as it was designated at the time, state road 1201) was built.

Cheeseman Inlet – A storm in 1806 closed what had been an opening, for approximately 50 years, from the ocean to the sound at this location. The land east of Cheeseman’s was named Sanford Island.[ii] The western part retained the name Bogue. The inlet covered a fairly wide stretch, indicated by low-lying land in the vicinity of Atlantic Station Shopping Center and the extensive expanse of wetlands or tidal flats to the north. When this inlet was open, the incoming tide brought sand and created the delta of marshland that extends north of this area into Bogue Sound.  (The name “Cheeseman” cries out for a story about its derivation, but research has failed to unearth anything. Still looking.)

Merriam-Webster definition: “hoop pole: a straight slender length of green sapling wood usu. of hickory or white oak that was formerly used as stock for barrel hoops.” Carteret County, as was common in the 18th and 19th centuries, had local barrel makers. The American Heritage Dictionary, 5th Edition, indicates that “hooper” was a name used for someone who made wooden barrels and tubs, more commonly known as a cooper. Barrels were critical for trade, transportation and storage of all kinds of goods. A location where such saplings grew could reasonably acquire hoop pole as part of its name.  Merriam-Webster further makes clear it is two words, not one, and it is not hoophole. 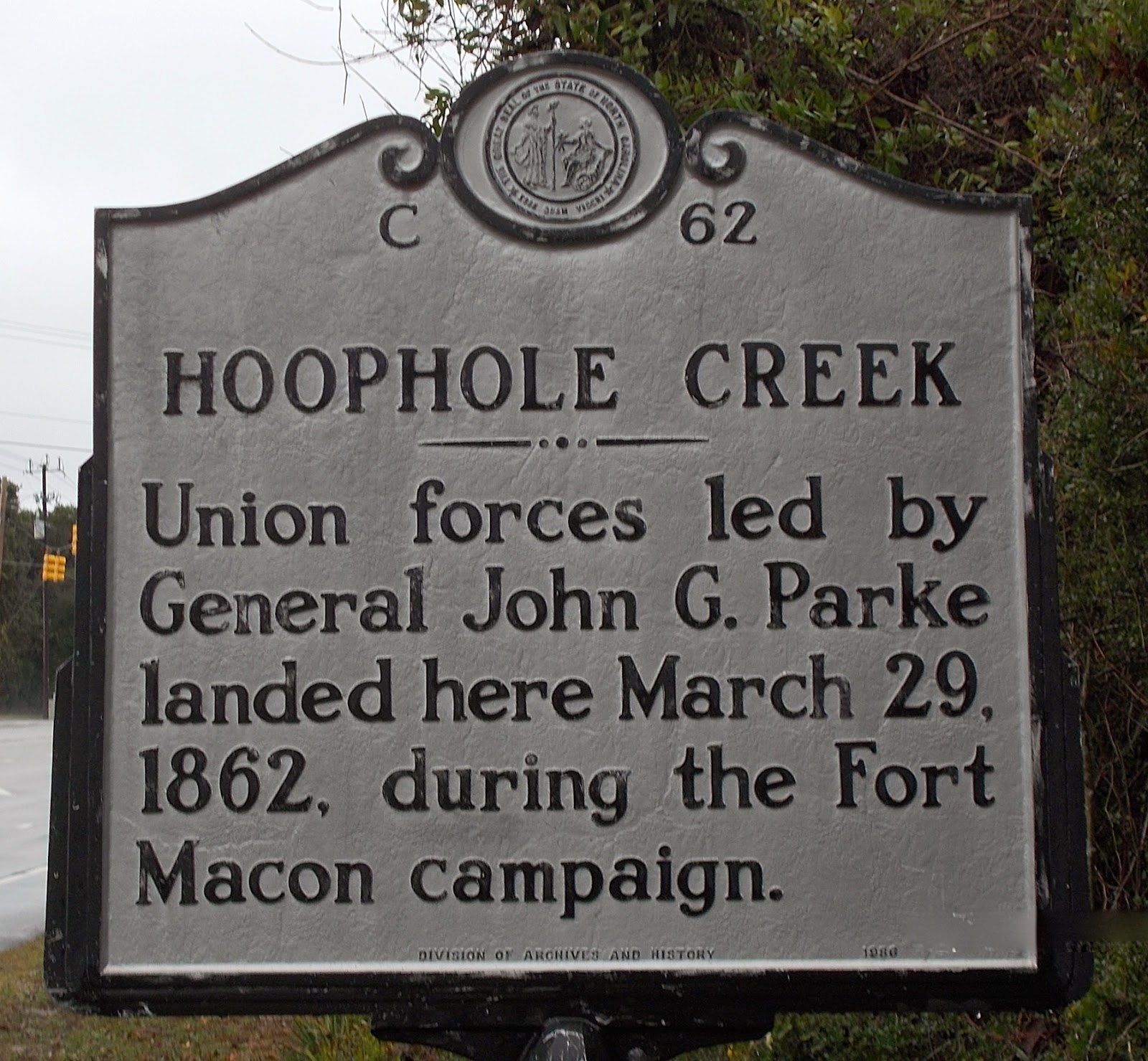 There is a highway historical marker at the head of Hog Hill Creek that is entitled Hoophole Creek. Putting aside the confused spelling, the placement of the sign implies that Hoop Pole Creek is located down the path by the sign, when in fact that is Hog Hill Creek and Hoop Pole is a mile further west. Using today’s landmarks, Hoop Pole Creek is the body of water behind, or north of, the Bogue Shores Condo Motel.
[Update May 2015. The sign mentioned above was removed in March and a revised sign was erected in April in a more appropriate location.] 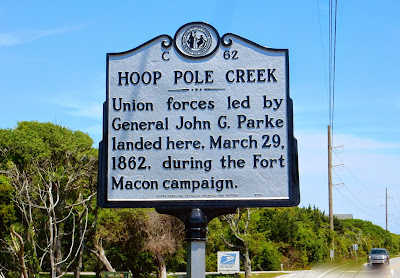 Lowenberg Line  - There was a Lowenberg east line and a Lowenberg west line and an associated path. In 1867, C. R. Thomas sold a parcel on Bogue Banks to the Lowenbergs, members of a mercantile family in Beaufort. The 1866 deed, in its entirety (spelling, punctuation, capitalization as in the original), reads as follows: [iii]

State of North Carolina, Carteret County
Know all men by these present that I, C.R.Thomas, do bargain and sell unto Charles Lowenberg & Benedict Lowenberg, Copartners under the firm & Style of Lowenberg Bro. for and in consideration of the sum of Three Hundred Dollars, and by these present I have bargained & sold unto said Charles Lowenberg & Benedict Lowenberg, Copartners, Lowenberg Bro. and their heirs and assigns a certain parcel of land situated, lying & being in the County & State above written, on Bogue Banks & bounded as follows:
Beginning at a stake on or near the eastern most prong of Hoop Pole Creek running south across the banks fifty four poles to the sea, thence South 81° West along the sea shore five hundred & sixty four poles to a stake; thence north one hundred & seventy two poles across the banks to the sound; thence the various Courses of the Sound to Hoopole Creek & thence along the North of said Creek to the Beginning – Containing three hundred Acres more or less.
To have and hold the aforesaid land unto them the said Lowenberg & Bro. & their heirs, Given under my hand and seal at Beaufort North Carolina this first day of December, A.D. Eighteen hundred and Sixty Six.
Signed, sealed & delivered
in presence of
M.F. Arendell                                                       C.R. Thomas   seal

With this description, a map with scale, a pair of dividers and knowledge of the location of Hoop Pole Creek, it is possible to layout the parcel on a map.  A pole is equal to 16.5 feet.

Yaupon Point – identified with various spellings.
“Points” were critical navigation aids in past centuries. A projection of land that was visible while at sea helped the boater find his way and made it easier to come ashore at a specific location. During the late 1800s, when the population of Carteret County was 9,000 or so, all but 100 lived on the mainland and visited Bogue Banks by boat. Having known, visible points of land was critical. Accordingly, Bogue Banks had many: Yaupon Point, Frost Point, McGinnis Point, Piney Point, Rock Point, Hoop Pole Point, just within our area of interest. An enhancement to navigation was made in the early 20th century by adding visible painted markers to traditional landmarks.
Yaupon Point was one of the points that received such a marker. It was given the name Bullock. Land-based navigation aids were given names, and  markers in the water were assigned numbers.
In the 1917 deed between J.A. Royall and Alice Green Hoffman (Book 46, page 296), the parcel's description starts  as follows:

“Beginning at a cedar post located on Yeopon Point near the east prong of the tripod erected by the United States Government and now standing on the north shore of said banks or island, thence running due south across the banks along what is known as Lowenberg’s line....”

The “tripod erected by the United States Government” referred to is the post for the navigation marker. Yaupon Point is at the north end of the west Lowenberg line as described in the 1866 deed. Using today’s landmarks, it is near the clubhouse of the Country Club of the Crystal Coast.

Abonita – various spellings, Aibonito, Abonito, Albonita -
In 1910, Oscar Kissam of Huntington, New York, acquired approximately 82 acres on the sound side of Bogue Banks with path access to the ocean. Kissam subdivided the land into lots, some of which he sold to waterman friends back on Long Island. In October 1915, he sold the remaining lots back to John A. Royall. The 1910 transaction is recorded in Book 19, page 73. Part of the description is as follows: “Beginning at a cement post which is located on the shore, on the east side of the Sage Path on Bogue Sound, said post being 26 chains (1716 ft) west of the Royall-Coleburn northwest corner..." We have a clear understanding of the location of the Abonita property because several of the lots that Royall was not able to reacquire before he sold the land to Alice Hoffman in 1917 have been incorporated into the lot plan of Pine Knoll Shores. It is the author’s interpretation that Sage Path ran along the east side of the Abonita property.

McGinnis Point – In the census of 1800, nine heads of households were enumerated as living on Bogue Banks from Old Topsail Inlet to Bogue Inlet.  One of those nine was “Jones Meginnis.” The Meginnises lived on a promontory of land approximately 1.7 miles west of Yaupon Point. In 1820, a “Dorcas Maginnis” is listed. In subsequent censuses, neither the name “McGinnis” nor any of its variations appears.  Even though the family was only there for a couple of decades, it was sufficient time for their name to be linked to the location.

Church Spire in Salter Path  The first church building in Salter Path was a structure that was moved from Rice Path in the 1890s and erected near a path that ran from the sound to the ocean. This path was next to Mr. Salter’s house. Relative to today’s landmarks, that path, “Salter’s Path,” was within the property of Prof. Hacker’s Lost Treasure Amusement Park, perhaps running along Hoffman Beach Road.

Several years after the move to Salter Path, this building was moved again to a location in the middle of the community of Salter Path. By the mid-teens, the building was replaced with a new structure on a tract of land deeded to the church trustees by J.A. Royall in 1913. The most likely location was on the south side of Salter Path Road near the Headen Lane intersection.

This church remained at this location until 1941 when it was destroyed by fire. A new building was constructed on the east side of Shore Drive. That structure was replaced in 1976 by the current brick structure on the north west corner of Salter Path Rd. and Shore Dr.

The location of the church comes into play in determining the west boundary of Mrs. Hoffman land.  The 1917 deed in which J.A. Royall sold land to Hoffman (Book 26. page 442) gives the following information about the west boundary:  “... a point on Bogue Sound 7,250 feet west from the church spire at Gillikin, NC....” (Salter Path was referred to as Gillikin for a few years because the post office was named Gillikin after Bettie Gillikin, the teacher at the community’s one-room school.  The named was changed to Salter Path in 1919.) Measuring 7,250 feet from the 1917 church location brings the west property line to about the current Emerald Isle town limits.  In the 1922 deed in which J.A. Royall sold the west portion of Bogue Banks to Henry K. Fort (Book 38, page 284), the same “ 7,250 feet west of the church spire in Salter Path” was used to identify the east boundary line.
The story continues on "Boundaries"