History is often told through grand events and momentous changes, but in trying to understand an individual person and why they did what they did, the mundane, day-to-day activities may provide a more nuanced and human picture. And when we get down to a daily activity, which we all can relate to, another side of Mrs. Hoffman, shows through. Lets go to Alice’s kitchen and see what’s cooking.

The basis for this post comes from many sources. Much is from her unpublished autobiography manuscript[i], the Alice Green Hoffman #127 at ECU, a 1964 deposition from George Smith of Salter Path[ii], an article written by Martin V.B. Ives, published in the Potsdam Courier, NY, in 1913[iii], Virginia Pou Doughton[iv], and others.

“My kitchen was my pride,” Alice tells us at one point, in talking about her life on Bogue Banks (1915-1953). In 1915, she took a long-term lease on the cabin that John Royall had originally build for his friend, which was located a few feet east of his cottage or hunting lodge. In her autobiography, in several entries, Alice writes at length about remodeling and extensively rebuilding properties that she rented in New York City, Southampton, Long Island and Paris, France. This approach to making things to her liking also took place on Bogue Banks.  As part of the lease agreement, John Royall agreed to install a bathroom and running water. Recently discovered correspondence reveals that even after she bought the property in 1917, she continued to expand and build upon the cabin and never moved into the Royall's hunting lodge.

Upon arriving in 1915, the first task she undertook was to set up a proper kitchen. The autobiography and other sources provide glimpses of the kitchen and how it was outfitted. I have used this information to draw the following layout of her “pride.”

She quickly realized the kitchen was too cramped for her intended use, an added on a storage room behind the kitchen. This allowed the tubs used for cleaning kitchen equipment to be removed from the kitchen proper and provided a place for the scullery maid to work. Before finding Bogue Banks, she met Mrs. Perkins of Beaufort by way of a real estate advertisement. When Alice first came to live on the island she ordered 20 dozen jars of assorted fruits and vegetables from Mrs. Perkins's daughter. This made a good start at establishing a larder in the storage area. She and her staff engaged in the common practice of putting away summer produce by canning. Initially, produce would have come from farmers on the mainland; eventually there was a cleared area, which could have allowed an acre or so for a vegetable plot. This helped tide the household over until the next growing season.

The second major change was to replace the sheet-iron wood stove that John Royall had in the house with a state-of-the-art kerosene fueled Perfection Brand Stove with oven. The linoleum flooring she chose was a pale blue that matched the blue of the burner chimneys. This color choice was used in the selection of kitchen utensils, “utensils of the same shade, interspersed with aluminum.” Elsewhere, she mentions having big aluminum saucepans. In the 1910s, aluminum was the up and coming material for use in the kitchen, which only those with means could afford. Until the 1890s, it was more valuable than gold. The war in Europe drove demand, and production increased, allowing it to be used for specialty goods. From her Papers we learn that in 1918 she attempted to get a set of white Vollrath Ware salt and pepper skakers from Wanamakers store in Philidelphia.
She also replaced the rustic tables with a worktable and main table made of Vitrolite. The Vitrolite Company was founded in 1908 in West Virginia to make structural pigmented glass. It was a popular building material in the first half of the 20th century for exterior and interior wall surfaces, popular with the art nouveau style. It was also used in tables and countertops. Many a soda fountain counter was made of white Vitrolite.  White or black were the original colors. Other colors were not available until the 1930s. 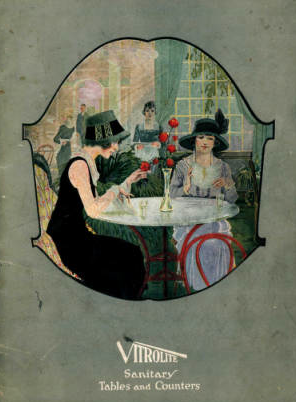 She mentions keeping cream cool, so there well may have been an icebox. If so that would have required regular trips to the icehouse in Morehead City. 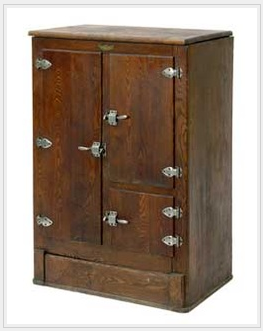 In her writing, Alice mentions two other pieces of hardware she purchased to outfit her kitchen. One was a wall-mounted coffee grinder, which, because it was built of cast iron, would rust within months when not used. Any reader who lives here knows that problem. Remember, the only air conditioning she had was to open the windows.
Alice enjoyed a good cup of coffee, which is not surprising given her many years in Paris and other cultured locales and went to some effort to brew a good cup. She imported Arabica bean from the Esperanza plantation in the Chiapas region of Mexico, near the border with Guatemala and had them roasted weekly. Her friends Ernest and Edna Ryle, who owned the lodge in Canada, had an interest in the Esperanza Plantation. To bring out the fullest aroma, she would gently oven roast the beans right before grinding and brewing. A quick breakfast she would serve consisted of hot bran muffins made with New Orleans molasses, pancakes, bacon and coffee.

In addition to a good cup of coffee Alice also enjoyed a fine glass of wine. Later in her life, in the 1940s, hard liquor was also regularly on the grocery list. She talks about buying wine by the hogshead “still in the wood” and having it bottled for storage and use at home. The first mention of buying wine in the cask (a hogshead is a wooden barrel containing 46 imperial gallons) was when she was living with her Father in New Jersey in her late teens and early 20s. 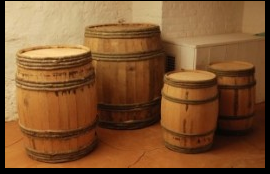 During her years on Bogue Banks, Alice expanded and remodeled her home many times. It is often described as having seven basements among other features. It would be in character for one of those basements to be a wine cellar. In 1918, a year after she bought the Bogue Banks property, she ordered from a wine merchant in New York 200 bottles of Zinfandel, at $4.75 per case. While in Paris, she built, what she considered to be a credible wine collection and an extensive collection of extra fine brandy—some of which she brought back to the United States. She particularly enjoyed suduirant, claret, champagne, and brandy from Bordeaux.

The other addition she made to the kitchen was a set of graduated glass apothecary jars she placed on the Vitrolite worktable. The large one in the center held 20 lbs. of flour, and the smaller ones contained the dry staples needed to run a proper kitchen. 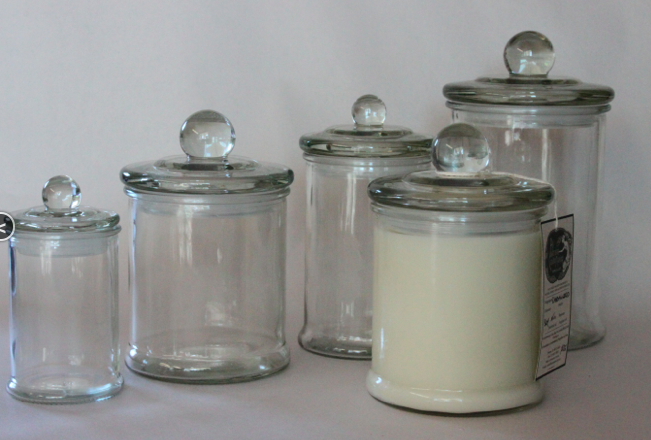 On the table top, in addition to the flour, were kept cornmeal, bran, coffee beans, tea, sugar, chocolate beans, rice, barley, farina and such. She believed this storage approached simplified the work of ordering supplies. One glance at the table would show what needed to be replenished.

To complete the picture of her kitchen, she tells us the window over the worktable faced the west and had good light, which was important because lighting came from natural sources, or candles and kerosene lamps. The walls were wood paneled (bead board was popular at the time) and painted bright white. She coordinated the blue highlights in the linoleum flooring with the blue from the Perfection Stove chimneys. The ceiling was probably exposed to the rafters to allow heat to rise to keep the room cooler in the warm months.

The water source and plumbing arrangements for the house and kitchen are still under research. The autobiography provides a number of clues, but much remains unclear. Common at the time was using a hand pump in the kitchen and dipping into the rain barrel for washing water. Before Alice leased the house, Mr. Royall was to provide running water. What that meant in rural 1915 was probably not what we think of today. She mentions at one point that the water supply was much improved after she replaced the small tank Royall installed with a 300 gallon one. Included in a letter she wrote to her farm manager in 1919 is an extensive discussion about the water system and the many problems they were having with it. At that time the farm had a Kawenee Brand engine and pump that had failed and she was in contact with the manufacturer concerning repair parts, also as a back-up there was a Rider Ericsson Hot-Air engine and pump that no longer functioned. Until repairs could be effected they were relieing on an artesian well and ram pump. In recent discussions with local experts knowledgeable in the working of wells and plumbing, report that artesian wells were possible on Bogue Banks until upland industry and development lowered the water table. Even when possible, the water only rose by natural pressure within a few feet of the surface, thus a pump was still required. The water system at Shore House, when in operation would have been powered by a kerosene-fueled Kawnee stationary engine driving a well pump to fill an elevated tank. The engine could also be attached to a pressure pump when required.
During the time that the United States was actively engaged in fighting World War One and Alice's cook left to serve the country, she took over the cooking chores. She tells us that she and Miss Curtis ate in the kitchen at the main table “from preference, like my forebears” or perhaps due to the house lacking a dinning room at the time.

Apparently, she had a number of staff in her household she provided for, and from her writing, it seems she apparently provided for them well. She believed, when it came to food, there should always be plenty, and of a pleasing variety.  Due to the size of the household, many of the meals prepared focused on volume. She mentions at several points preparing hams and turkeys. No hint whether the turkeys were wild or domestic. An aluminum double-deck pot with white potatoes on the lower part and sweet potatoes above allowed quick meal preparation. Another standby was “cow-pease” soaked overnight, then slowly cooked with onion, which made a delectable side dish.

A properly set-up kitchen that was well equipped with an efficient stove and reliable water supply was critical to Alice. That accompanied by the effort to maintain a full pantry of staples and readily available fresh meat and produce, required significant time and effort the first several years Alice was at Bogue Banks. In reflecting on the changes she made to the kitchen, Alice states, the changes “made this one of the most agreeable rooms in the house.”