Risk-taking may have been the overriding character trait of Alice Green Hoffman. Coming to the remote island of Bogue Banks in 1915 as a single woman was certainly a gamble, but Alice had an early attraction to betting and had become accustomed to winning long before she started losing. 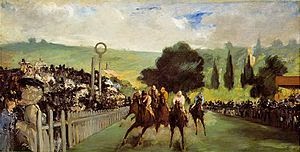 Between 1889 and 1914, Alice Green Hoffman spent a good deal of her time in Paris and at the track. Her fascination with horseracing is described in her unpublished autobiography.[ii] She entitled one long section, “Racing,” ending her first paragraph with what could be the metaphoric topic sentence of her life: “It did not take me long to learn that racing odds can change, and usually do, with every tick of the clock.”

Her interest in horseracing began in her late 20s when she met in Paris Princess Victor Duleep Singh, the former Lady Anne Blanche of Coventry, living in exile after marrying the son of a maharaja. [iii] 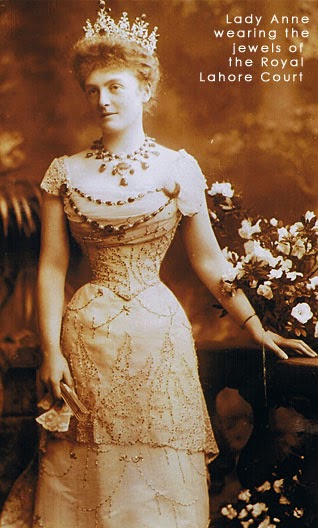 The exact location of the meeting was 21 Square du Bois de Boulogne, where Alice’s sister Grace would later (1895-1899) live —a location close to two famous horseracing tracks— Longchamp and Auteuil. 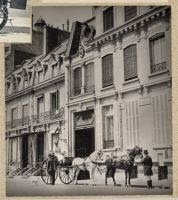 In 1892, Alice and another friend Helen Benedict rented a place in the same neighborhood, at 55 Champs-Elysees. Going to races and betting were popular pastimes for their social set. Initially, Alice says she went only to “big” races “because everyone did.” But soon, she would be going much more regularly. As time went on, Alice did not restrict her horseracing excursions to nearby Bois du Boulogne tracks, but also went some distance to races in Enghien, Colombes, Chantilly, Deauville, St. Cloud, Maisons-Lafitte, Tremblay and, even at times, out of country—for example, to Brussels. Alice's Paris residence was surrounded by tracks, but Enghien and Maisons-Lafitte would have been a long ride.

Alice had, at the death of her grandfather Theron Butler in 1886, inherited valuable property and was benefactor of a substantial trust fund set up for her and her sisters. Around this time, she also began “investing” in property in New York, but her fascination with Paris persisted. She continued to make trips there.

When in Paris, with money to spare, she bet at the track and at the card table. A game she bet on heavily, one time losing as much as $3,000 playing at a casino, was  Chemin de Fer, also known as Shimmy, where players bet one at a time against each other. Playing cards at home was also a popular social activity among her friends and another way to satisfy her gambling instincts. The connection she made between the card table and the track became apparent when she named a horse Flush Royal.

Around 1895, when Alice rented a place on the Avenue du Bois de Boulogne, she began owning and racing her own horses. This was ten years before she married. The desire to own racehorses, she claims, came from her attraction to racing colors. The colors she would register for her horses were a combination of white, emerald green and black. Colors she had seen on women depicted at jockeys in a Revue Magazine: white jacket, emerald green sleeves and black velvet cap.

But, her love of the track had to be more than a fascination with colors. Going to the races meant being outdoors or as she says, “in the air all the afternoon,” and it gave the ladies an opportunity to show off fancy dresses—often “mousseline de soie”—among well-outfitted gentlemen of means. But, Alice could have satisfied her love of the outdoors, of high fashion and high society in strolls along Paris boulevards. I believe the excitement and rush of risk-taking with monetary rewards trumped all other reasons for her attraction to horseracing. She became addicted and admits, “When I finally began to go regularly I don’t think I missed a race-meeting in ten years.” 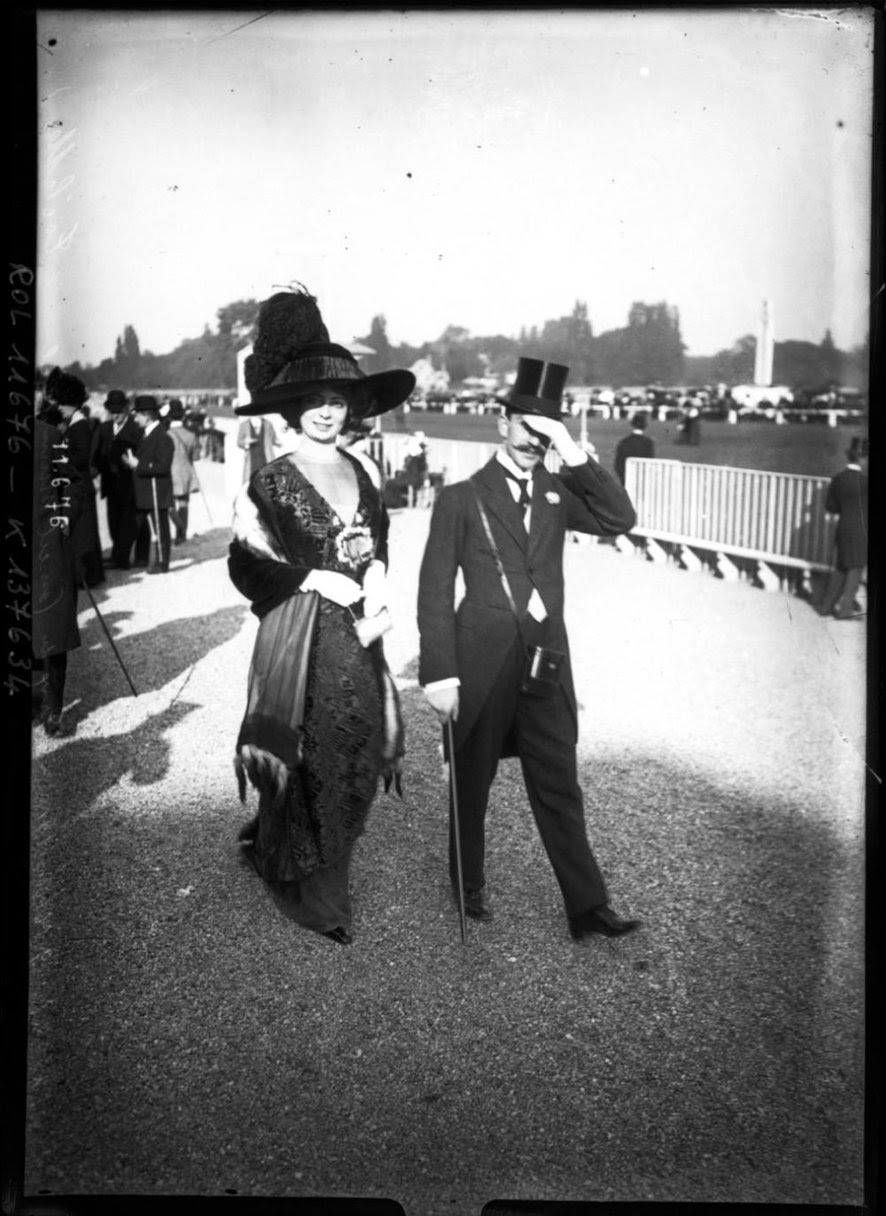 High fashion at the races in Longchamp[vi]

She attended enough to know who the good racers were and writes about failed opportunities such as losing out on a sure winner, a horse owned by M. Ed. de Rothschild, because of a misplaced bet. On the following day, at Longchamp, she put 200 francs on a horse to place, dropped the tickets when her horse lost, but learned that a disqualification of the winner put her back in the money. She found her tickets the following day in the stands and won 800 francs.

Her normal strategy was to pick her horses at home before the races, bet 200 francs ($40 in prewar money, in 1900 a princely sum) on each race until she won, then increase her bet with her winnings in subsequent races. Sometimes, however, she was forced to stop, having lost all her money, but, other times, she won big. For example, one day at St. Cloud, where heavy rains turned the track into “a veritable swamp,” Alice says, “I put all my winnings on Bethsaida and came home with a small fortune.” At Tremblay, she played the field and was rewarded with 20-1 and 10-1 returns. 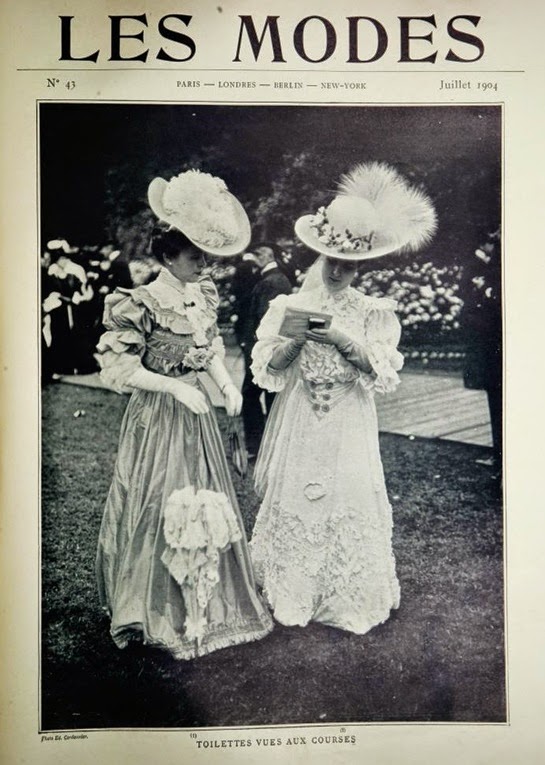 With her own horses, her luck was mixed. The first racehorse she owned, she says, “never did anything outstanding, but managed to get into the money often enough to pay for his keep and training.” Her second horse, “a little filly,” was even less of a racer. Her third horse, recommended by Princess Duleep Singh, was bought about three years into Alice’s marriage. The horse cost 2,000 francs and, initially made 10,000 francs, but, unfortunately, Alice’s luck was about to turn.

This was Flush Royal. Planning to race him as a thoroughbred, believing steeplechase jumps to be too dangerous, she still thought she should insure him and was delighted to find an insurer willing to put a 3,000-franc value on the horse. She entered Flush Royal in a race against two horses from the Vanderbilt stable, which had won the Grand Prix at Longchamp in 1908. Flush Royal won and paid five to one. Later, he and Alice lost big at a small track in Brussels.

Around 1910-11, Flush Royal, injured by another horse, was killed. To get the insurance company to pay, Alice, who as a result of her recent divorce had gone to Canada for a visit, did what she would continue to do the rest of her life with property losses, threaten to take her case to court.

The risks she was taking attending races and taking her horses to various tracks included more than losing money or risking a horse’s life. She put her own life in danger. Many of these trips were made before the days of automobiles. Roads were primitive, “bumpy” and dangerous in more ways than one.

Bandits knew passengers were carrying “considerable sums of money.” Even though police patrolled the route, one time, she found “a bullet-neatly embedded in the back panel” of her carriage and realizes, “Had it gone through it probably would have got me somewhere about the waist....”

She also describes hailstorms and flooding on these trips, which put her life at risk, as did rowdy fans. At the track, crowds sometimes got out of control. She describes fires breaking out in the stands on one occasion and being “literally tossed up like a cork on waves” when a riot broke out.

The death of Flush Royal, Alice’s divorce and, finally, the outbreak of World War I were all factors leading to the end of Alice’s racing days, but her risk-taking continued and went far beyond the card table and the track. Real-estate speculations in New York and in North Carolina replaced actual betting. Purchasing and remodeling properties, she gambled and, unfortunately, lost. Attempting to raise cattle and run a dairy farm in North Carolina are two other examples of lost bets.

Alice herself makes a mental connection between gambling at the track and speculating on land with digressions that appear, incoherently with no particular reference to dates, in her chapter on “Racing.” For example, on page seven of that chapter, out of the blue, she remembers buying lots in Jamaica, L.I., having gone to a real estate auction with her friend Edna Ryle. She concludes the paragraph by stating: “I got rid of them in due course, and made a neat turnover....” But, as discussed in “Alice’s Financial Misadventures I. II, and III, she was rarely this lucky, and in the end, lost all her real estate in France, New York and North Carolina.

Despite her losses, we have to be grateful for Alice’s risk-taking. If she had not been a gambler, she may never have come to North Carolina in search of a “Paradise of a Home.” She found her paradise on Bogue Banks, a long-shot bet that paid off in a legacy as its “Queen,” first-lady of what would become Pine Knoll Shores.