By mid-1986, Beachwalk had new neighbors and Pine Knoll Shores had another homeowner association, the Bogue Shore Club.

On the oceanfront, just east of McGinnis Point beach access and west of the Iron Steamer beach access is the Bogue Shore Club, a distinctive white-stucco, four-story condominium with 32 residential units.  All units have a magnificent ocean view. Oceanfront decks overlook the beach and a large, beautiful oval pool. On the Salter Path Road side of the building, I stood on a second-story balcony and was delighted by a tree-top view of the Roosevelt Natural Area, extending east and west as far as I could see. 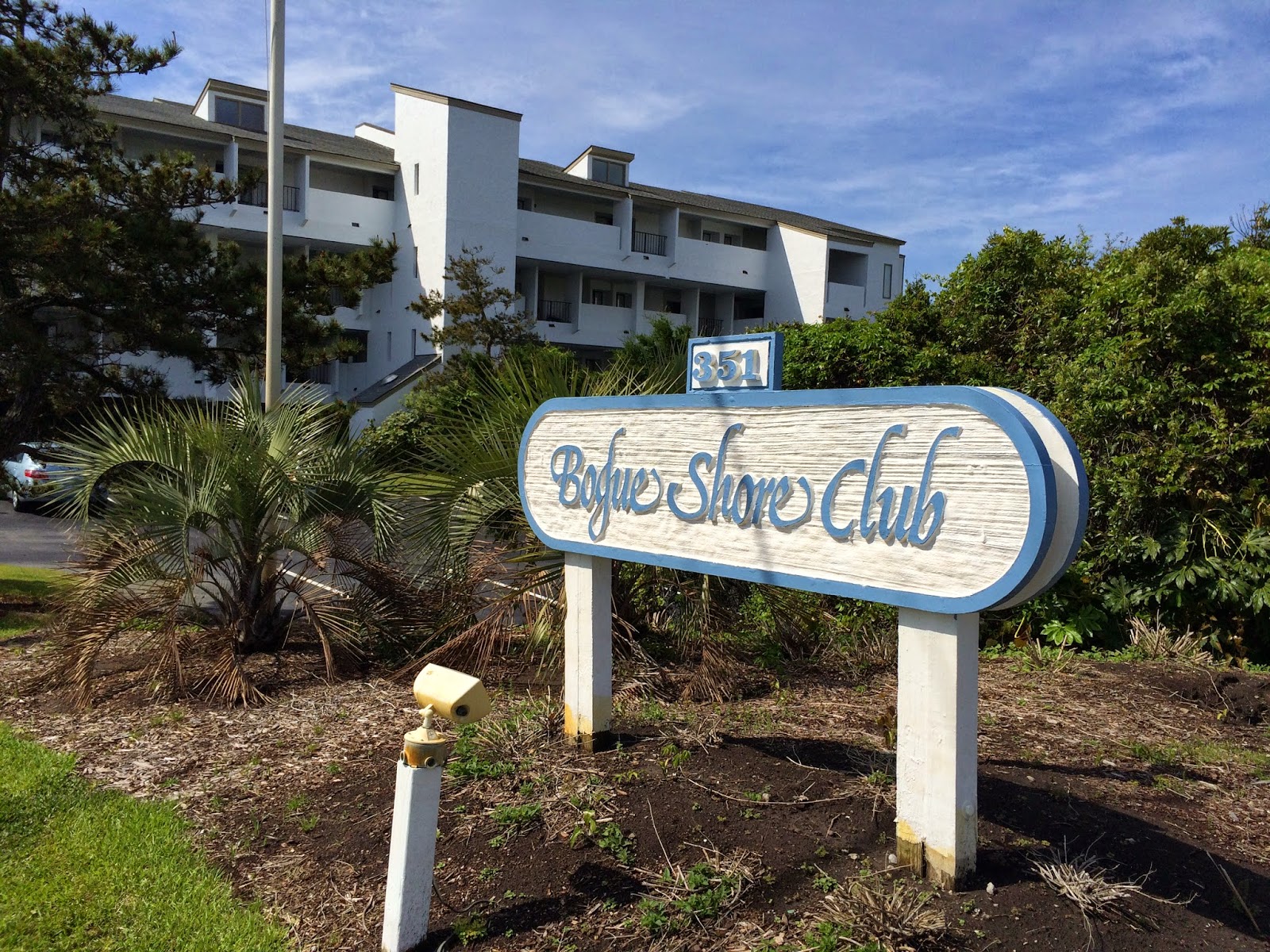 With convenient elevator access from ground level, each unit has a one-story floor plan. “It’s a top-drawer place,” said Adrian Gantt, a former resident and past-president of the Bogue Shore Club Homeowner Association.

Original developers were John T. Bell, Mary Jane P. Bell and W. Dean Best. Their names appear on original paperwork for the homeowner association, dated February 10, 1986.  The assumption is that they bought the land from the Roosevelt family and started building in 1985.

1986 Map shows all the HOAs already in place (black print) when Bogue Shore Club was built.

With six board members, the association has been very strong and was fully responsible for managing the complex, taking care of everything with the assistance of a property manager. When that Property Manager was Otis Culpepper, he served as a general handyman and go-to person for small projects. Later, Jennifer Locke McCann of York Properties was hired, and York Properties, working for the homeowner association, assumed some of the general management responsibilities and larger projects.

Like Beacon’s Reach, McGinnis Point and Beachwalk, the Bogue Shore Club Homeowner Association has its own sewer system, which it upgraded so the system would be totally underground. When it was built, it was a major capital investment, so the homeowner association established a capital fund for future needs.

The one news event many Pine Knoll Shore residents may associate with the Bogue Shore Club was when the fourth-floor balcony in the building’s middle section fell. Fortunately, no one was on or under the balcony at the time, but it did cause that section of the property to be closed off until it could be fully repaired. According to Bill Maynard: “…only one family was inconvenienced by the re-structuring. That did take several months, but we had the Vice President of the NC Structural Engineer Society redesign our supports,” using galvanized steel.

It has both full-time and part-time residents and nurtures a “big-family” atmosphere—true to its designation as a club.  In fact, when I asked why it was called a club, Bill Maynard said, “Being here, especially in the summer, is like being at a club.” He talked about the pool, impromptu joint dinners with fresh fish caught by one of the residents as well as horseshoe and bocce ball games. Another resident, Karen Bottomley, echoed the positive sentiments and said, “People who live here are friendly and always ready to help you.” Some residents do, however, rent their units.

Bill Maynard’s enthusiasm for living there confirmed Adrian Gantt’s sentiment that “it is an ideal vacation location.” Maynard described the Bogue Shore Club as “serene” and said he especially enjoyed “the beauty and rarity of sunrises and sunsets over the ocean.”