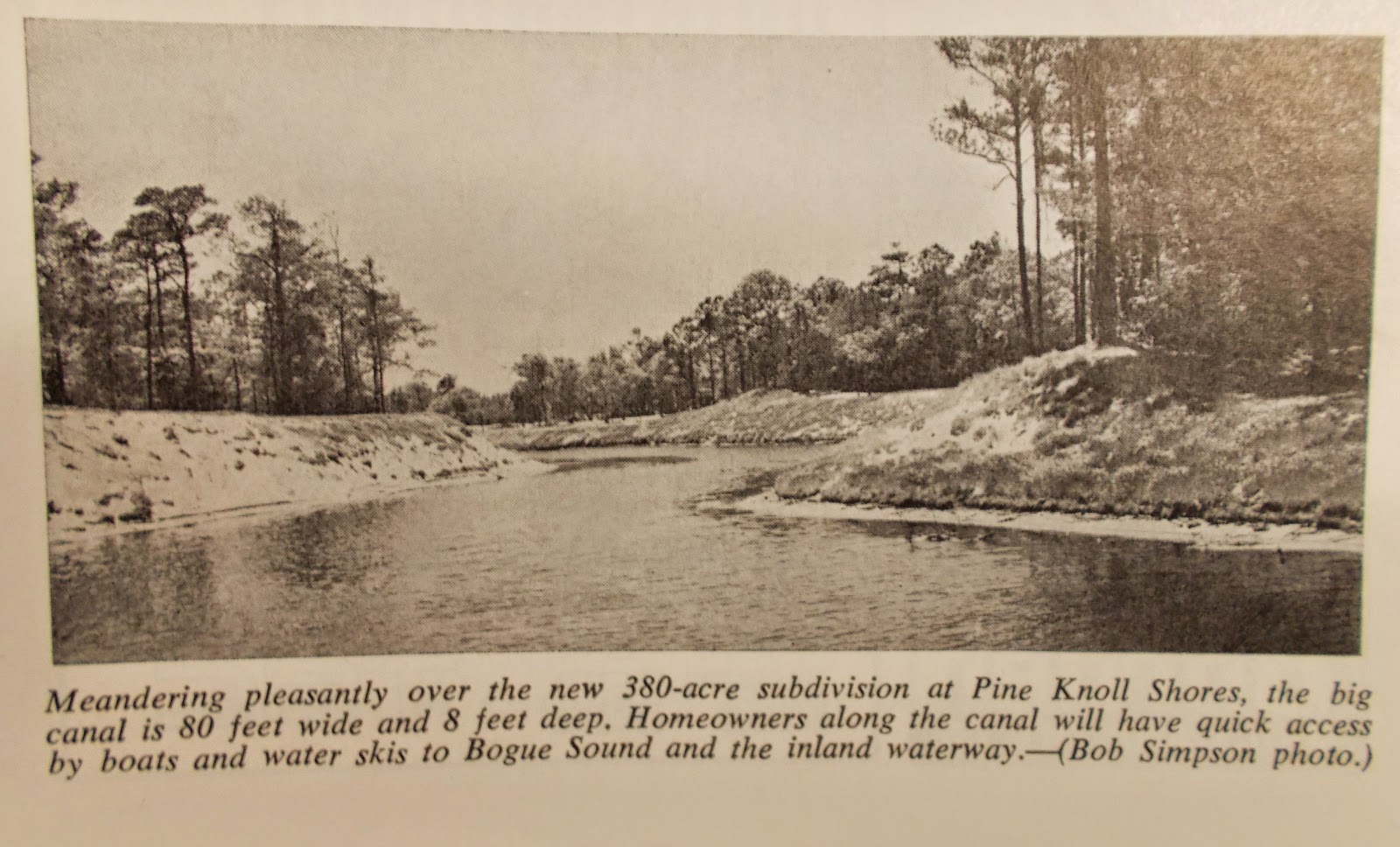 In the spring of 1967 a young couple on vacation from their work in Washington D.C. were exploring Bogue Banks. She was showing him the area where her Grandfather once had a fishing cabin. Turning off Salter Path Road at Juniper, they drove north on what at the time was a packed dirt road sprayed with tar-oil to keep the dust down. Going left when the road ended at Oakleaf, they proceeded a short way until the road ended at what is today McNeill Park. They left the car parked at the end of the road and explored the construction activity underway. A canal was being built by the use of a crane-type dragline. This inquisitive couple recalls a cofferdam near the canal’s north end to keep Bogue Sound from filling the construction site. Pumps were also operating to remove seepage and naturally occurring water.
This eyewitness recollection sparked my interest to learn more about the building of the Pine Knoll Waterway . . . Oh yes, that couple lives today in Pine Knoll Shores.
In the 1960’s building a canal system as part of a real estate development was a common practice up and down the east coast.   From a governmental regulatory perspective, constructing a canal system in the late 1960s and even the marinas at Beacon’s Reach and Sea Isle in the 1980s was significantly easier than it would be today. What with environmental sensitivity, wetland designations, wildlife and endangered species concerns, plant and habitat issues, water table and waste water disposal and ground water contamination considerations, the requirement for Environmental Impact Statements, and other county, state and federal regulations it would be a hard slog to develop a community today with similar amenities to what we have.

The above illustration appeared in the July 1967 issue of Our State magazine discussing the planned community being developed on Bogue Banks.

In Pine Knoll Shores the canal system was built to address several problems and to create a number of attractive conditions. Eliminate the negative and accentuate the positive.

The Problems:  North from the dunes along the ocean, the land was mostly low-lying. In 1998, Don Brock spoke at the town’s twenty-fifth anniversary celebration. He recalled that when he first came here in1965, his initial reaction was “This is just a swamp, it has to be drained.”[i] The water table, before the canals and marinas were built was quite near the surface. So much so, that the early houses built in the late 1950s could get water by use of shallow wells.
The second problem that had to be attended to, to enhance the attractiveness of the area, was mosquito mitigation! Some early property owners considered this locale fine for a place to come in the winter, but in the summer the mosquitoes made it intolerable. County and state health officials were sensitive to threat posed by mosquitoes in any low-lying, wet area, and often withheld development approval until abatement actions were taken.[ii]
The Positives:  The route of the waterway took advantage of some existing low ponding areas; the spoils from the digging were used to fill other low areas.  An early resident, who lived on Cedar Road recalled walking cross the tidal creek that existed before the canal was built. Perhaps it looked simular to the creek pictured below which is located in the Roosevelt Natural Area. 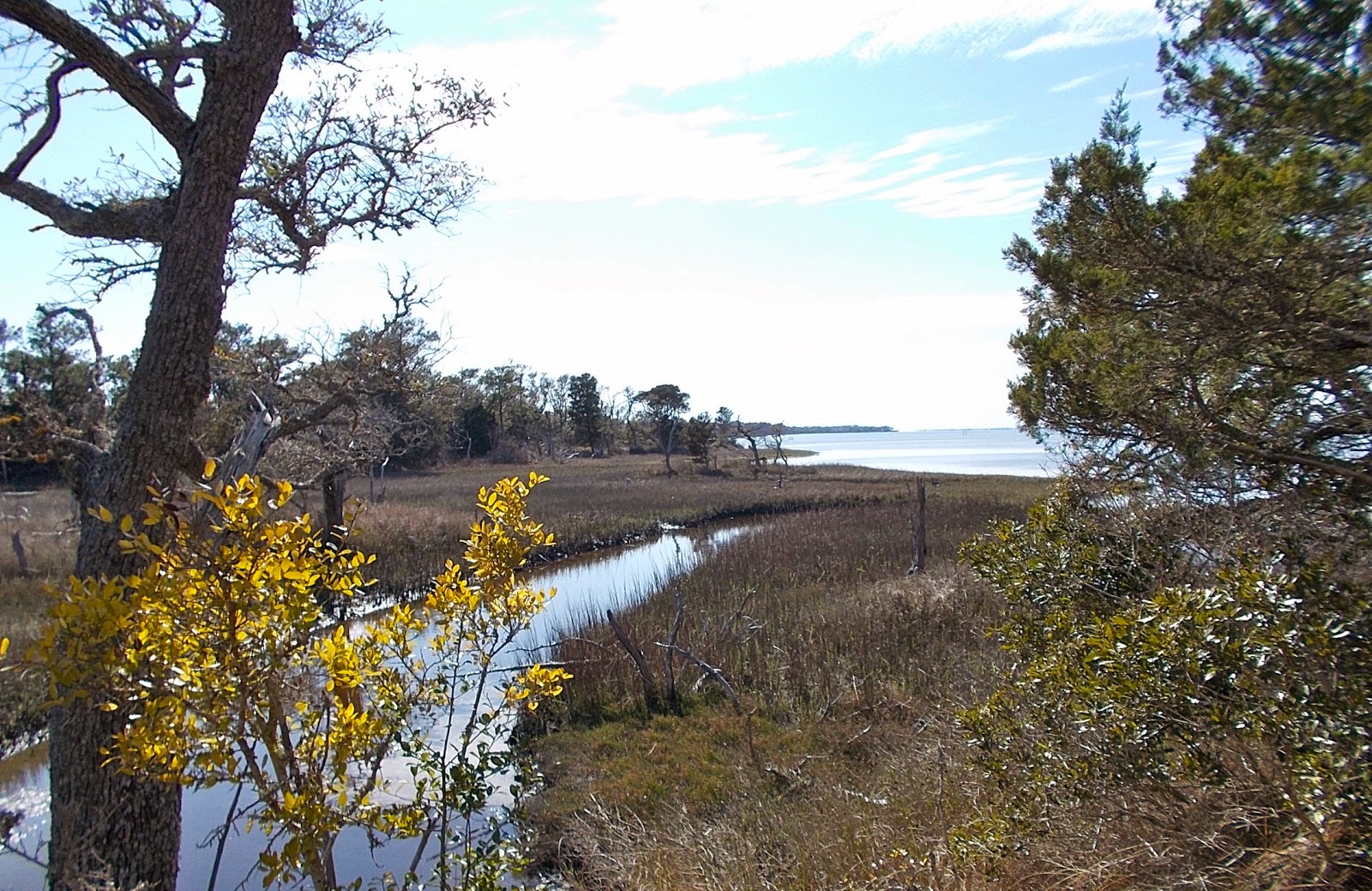 This approach eliminated swampy swales that held water after rain and were mosquito-breading grounds.   Additional spoils were utilized to raise the general level of the surrounding ground and roadways.  These actions contributed to other advantageous consequence – The canals in effect lowered the ground water level improving the functioning of septic systems, it also allowed rainwater to drain without the need for roadside ditching, a common sight in low country regions. 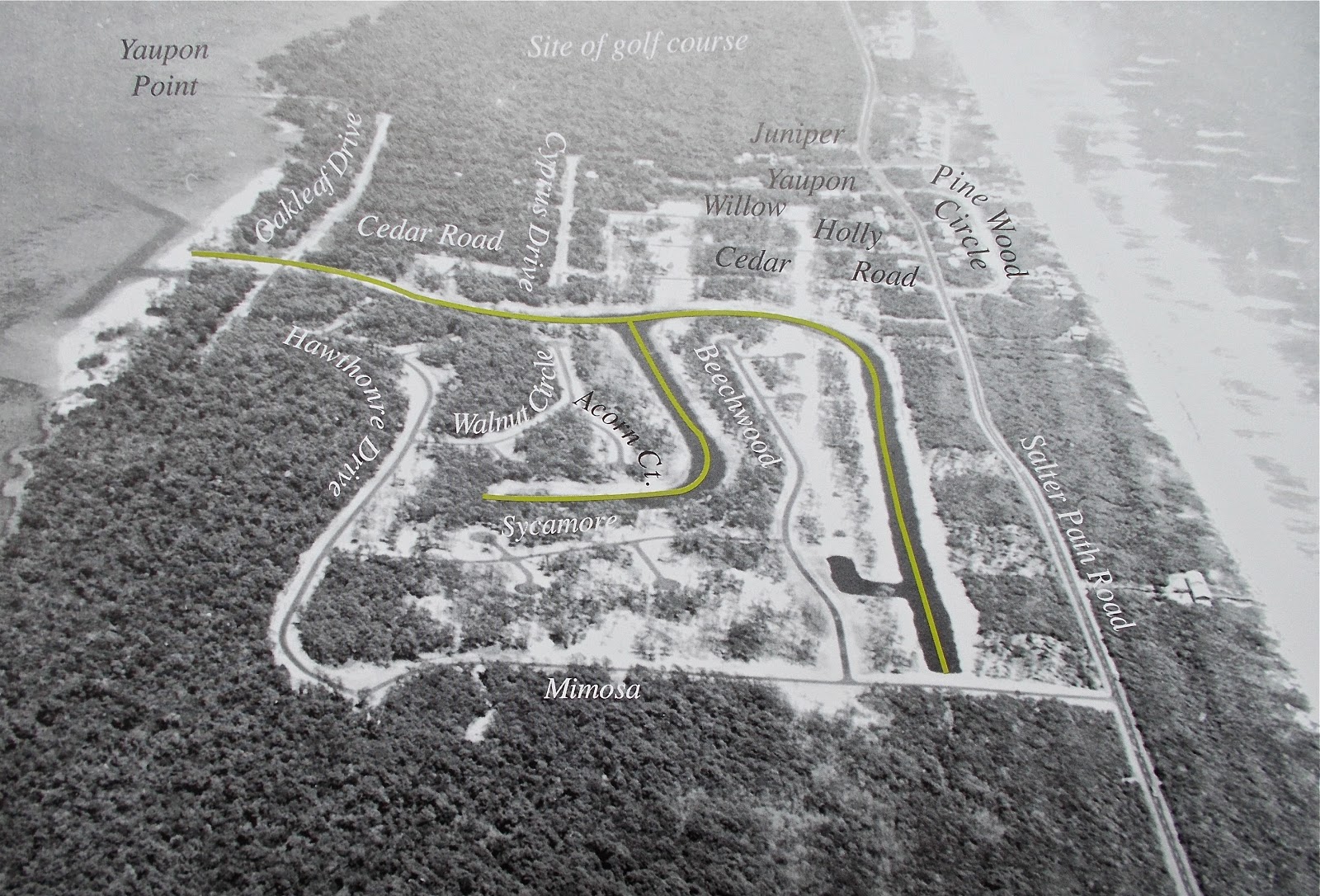 The canals in Pine Knoll Shores, official name Pine Knoll Waterway, were constructed in two phases.  Pictured above is the east half running from McNeill Inlet to Mimosa Blvd[iii]. This phase was completed in 1967; it included Hearth’s Cove, King’s Corner arm and Hall Haven marina.  At the opening of that phase the waterway was advertised as being 80’ wide and 8’ deep. 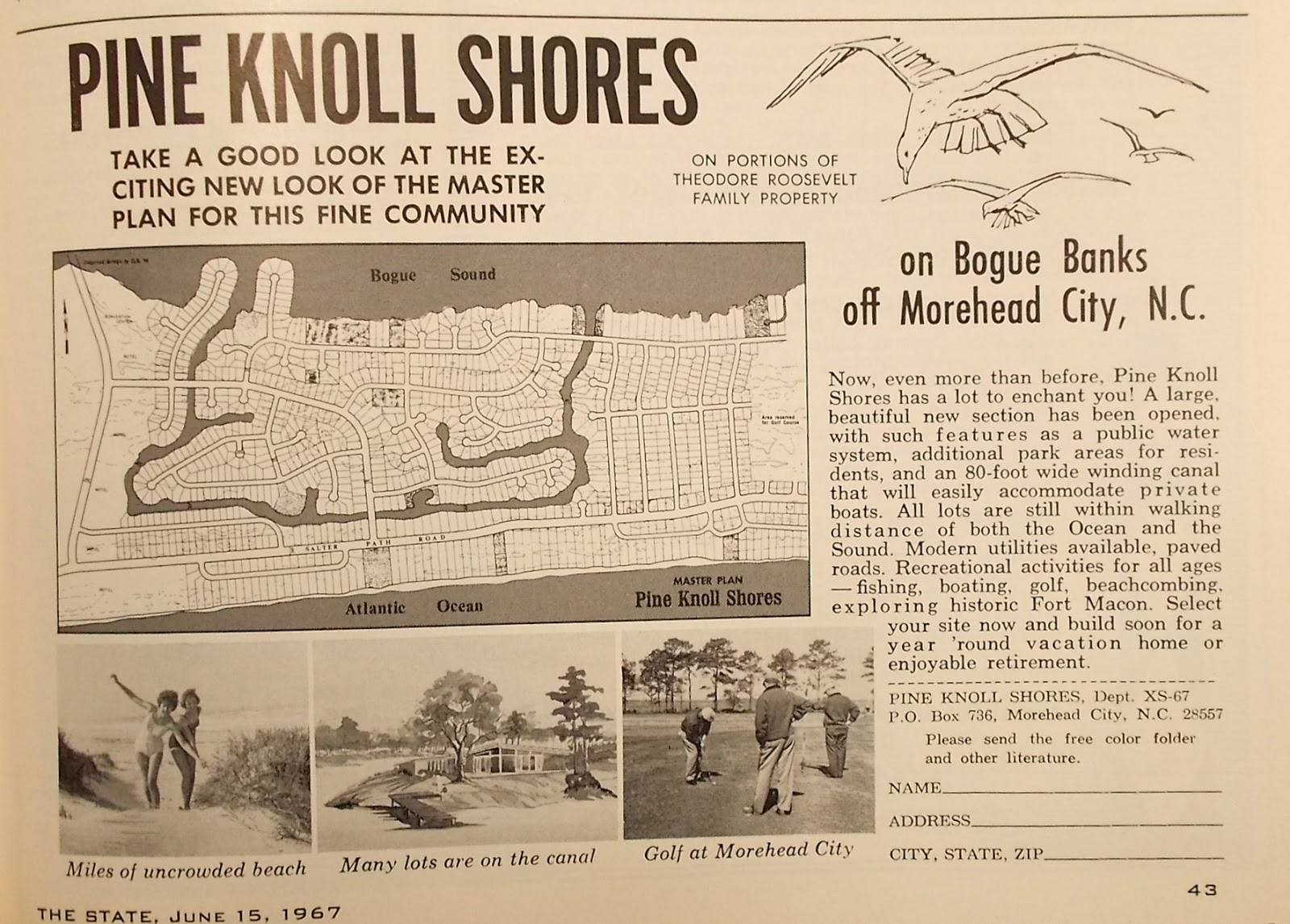 The East side of the waterway employed a crane-mounted dragline as the primary construction approach. A crane working from each side of the planned route of the canal would provide improved directional control and speeded up the process. Whether one or two cranes were used the operation would have been the same.
In a typical cycle of excavation, the bucket is positioned above the material to be excavated. The bucket is then lowered and drawn so that the bucket is filled by dragging along the surface of the material. The crane hoist then lifts the bucket. The crane is then pivoted to move the bucket to the place where the material is to be dumped. The material is deposited along the banks and the crane then moves forward on the mechanized treads.
A skilled operator could throw or cast the bucket, swinging the bucket like a pendulum. Once the bucket had passed the vertical, the hoist cable would be released thus throwing the bucket beyond the reach of the crane boom.  Even though a cofferdam was constructed at the sound end of the channel, huge pumps removed seepage and standing water in the channel during construction.

This approach produced a canal that was advertised as being 80 feet wide and 8 feet deep.  When complete the canal had sloping sides without any form of stabilization to prevent the sides from filling the canal. An initial approach to remedying this problem was to install stone Rip-Rap and wetland grasses, these proved ineffective.

The canal bottom filling with sand, that migrates from the sides soon became a serious problem. By the early 1970s a system-wide vertical bulk-heading program was undertaken.

This dragline construction approach produced another result that is observable today. The land adjacent to the east end canal is noticeably higher then the otherwise natural elevation. As the dragline cranes went about their business they produced mounds of material and high ridges that line the canal path. In places on top of existing dunes or filling swales between dunes and in other place running perpendicular to the natural east/east run of the dunes.

After the East side of the waterway was completed the developers and the Roosevelt’s were displeased with the damage this approach instilled on the land and the nearby vegetation, particularly the mortality to both pine and hardwood trees. A review of the condition by the School of Forestry, NC State [iv]pointed out, “The lower water table, cuts and fills, mechanical injury, and sudden exposure are four, any of which could place the trees under Stress.” Accordingly, a new construction approach was employed for the West end of the waterway system.

To avoid some of the negative impacts on the environment, AC Davis, a local construction contractor and civil engineer suggested and approach that employed pan scrapers and bulldozers.

Some of the advantages with pan scrapers are improved control of the depth and condition of the excavation and better control of the placement of the dredged material. Using the pan scraper technique one machine does the excavating, carrying, and leveling. As the machine traverses the excavation site it scrapes up a thin layer of material that is held in the machines hopper, when full it travels to the dispersal sight and deposits the material in a thin controlled even layer. This process is repeated as often as needed to attain the desired depth. In the case of the East end canal the material was used the fill low spots and to build up the roadways. Thus avoiding the high unnatural mounds and unintended damage to vegetation experienced during the East construction. 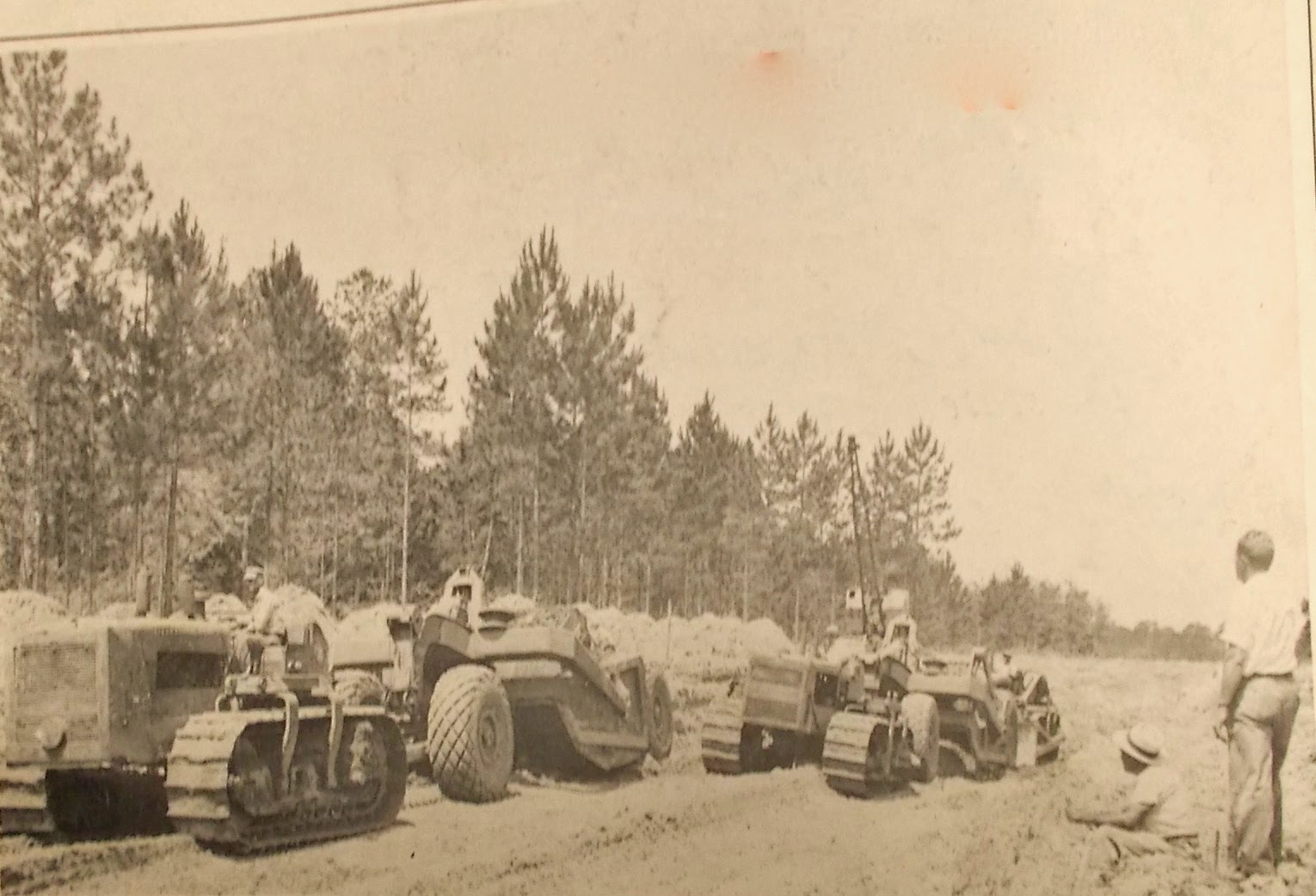 Before the dedicated motor scraper came into regular use in the 1960s, there were smaller versions: the towed scraper, one of the first bulk earthmoving machines invented. Nineteenth-century scrapers were drawn by horses, but were later adapted for use with tractors and bulldozers.

After the two parts of the canal were completed, only a small land link on which ran Mimosa Blvd remained as the final barrier to a free flowing continuous waterway. The original idea was to install a culvert under the roadway to allow water to flow[v]. They decided instead, to install a bridge to allow better tidal action circulation and permit small boaters to pass from one side of the canal to the other. A contract was entered into with T.D.Eure Construction Co of Morehead City in May 1972 to build such a bridge. The entire contract document is shown below.[vi] 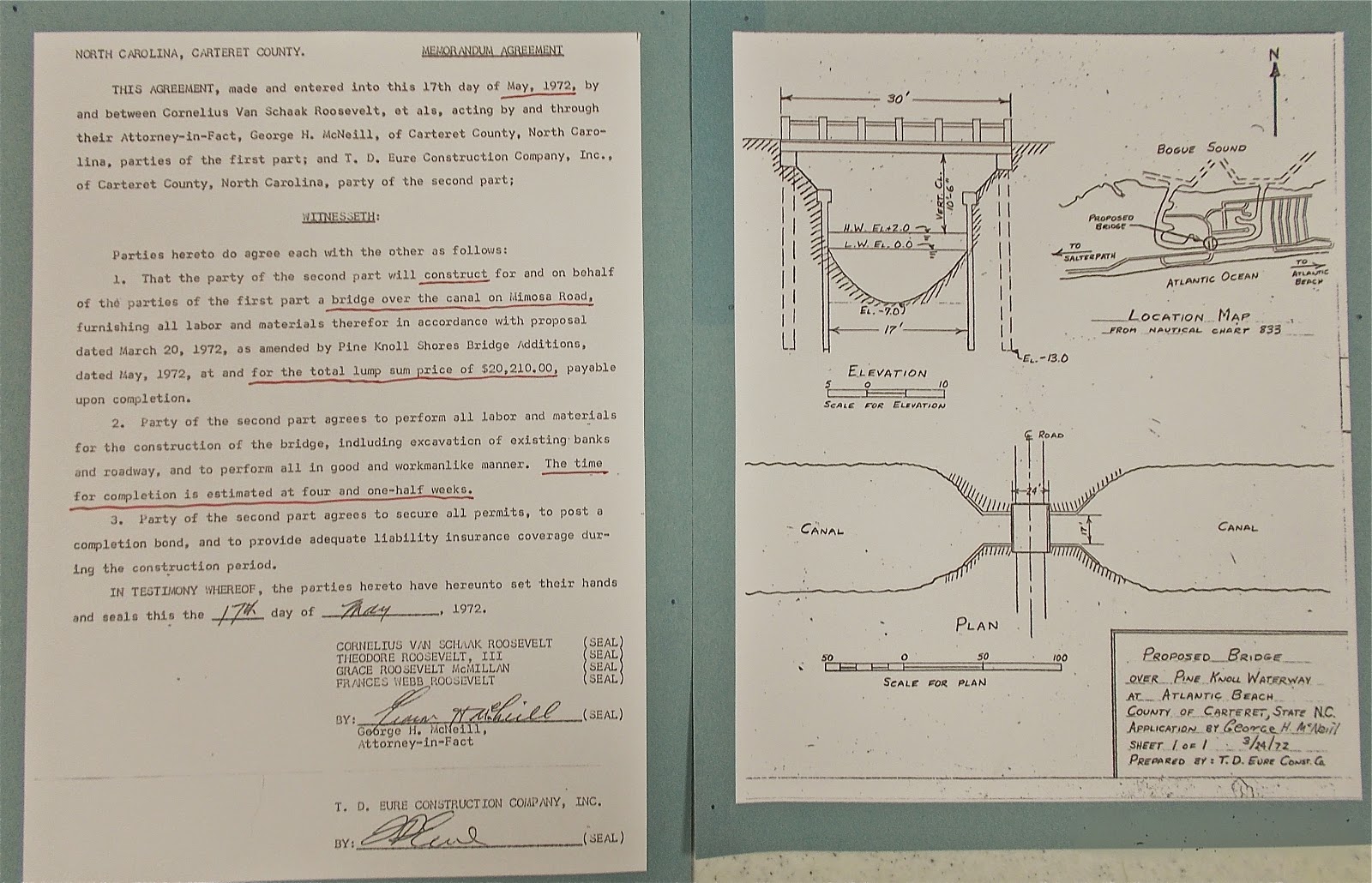 The construction schedule called for completing the task in four and a half weeks at a cost of $20,210.  (An amount similar to the cost of the bridge over the canal at Oakleaf.[vii]) As is the case with many construction projects, difficulties were encountered. The cost remained the same, but completion took an extra two weeks. That bridge built in 1972 was replaced in 2012, after a multi-year project, that also ran into a few difficulties, and at a cost substantially higher.

In addition to providing many recreational benefits, the canal system lowers the water table, which improves the operation of everyone’s septic system, helps drain the land, enhancing the dispersal of storm water and eliminating the need for road-side drainage ditches. All of which contributes to keeping the mosquito population at a tolerable level. The ownership and responsibility for maintaining the waterway is spread among several groups. The contents of the canal are federal/state waters, the bottom of the canal was deeded to Pine Knoll Association by the Roosevelt family, and the bulkheads are the responsibility of adjacent landowners as specified by town ordinance. Maintaining navigable depth is the responsibility of PKA.  In the past PKA working in conjunction with the town, have been able to acquire state grant moneys to partially defray the cost of needed periodic dredging. While the natural forces that move silt to the canal continue, there is no guarantee that state funding will be available in the future.