MRS. ALICE HOFFMAN TAKES AN AIR VOYAGE
Miami, Fla., Nov 11 - Mrs. Alice Hoffman of Paris, 70-year old aunt of Colonel Theodore Roosevelt, was speeding southward this morning as a passenger aboard the Pan American Airways, West Indies air limited, en route to Porto Rico for a months visit with the new governor of the Island.
Mrs. Hoffman was elated as she entered the plane here. She will lunch in the air between Havana and Camaguey today and stop overnight at Santiago de Cuba, arriving at Porto Rico Tuesday at 4:30 P.M.
The Mrs. Hoffman referred to above owns a fine estate on Bogue Island and is known by a good many Carteret County people.
______________

The brief article above from the Beaufort News contains a remarkable number of references concerning aviation history, United States history and the history of Pine Knoll Shores. The Beaufort News was a weekly publication, each issue typically 10 to 12 pages. The quoted article appeared on the front page—above the fold, in newspaper talk. In addition to documenting Alice Hoffman’s historic flight, it tells us she was “known by a good many Carteret County people.”

Another front-page Beaufort News article in the same issue, dateline the following day indicated that a “Pan American Airways seaplane en route from Anacostia to Miami was forced down by fog at Manteo,” highlighting just how risky Alice’s flight was. The November 12 story went on to say that the plane, carrying six passengers, remained at anchor overnight until conditions improved. (Update June 10, 2017 - The PanAm Historical Foundation was contacted and gave permission to use several photos that appear in this post. Subsequent discussions with them lead to a clearer understanding of the Manteo event. The airboat was a Consolidated Aircraft Company Commodore operated by the New York Rio and Buenos Aires Line, known as NYRBA. For a fuller story on seaplanes, the Commodores, NYRBA and PAA see Doug Millers story The Once and Future Commodore  )

Scheduled commercial airline service was in its infancy after a gestation filled with fits and starts of over a decade. Hundreds of commercial ventures were started across the United States, but most resulted in early failure or bankruptcy. The late 1920s witnessed the coming together of safety, finance, technology, regulatory support and infrastructure to sustain a viable industry. Government contracts to carry mail were key to that success, and passenger travel aboard planes would become more and more popular. The Aerospace Industries Association 1930 Yearbook lists annual passengers carried on commercial airlines as follows: 1927–12,594; 1928–52,934; 1929–165,263. At the age of 67, Alice Hoffman became one of those passengers.

The U.S. Centennial of Flight Commission stated: “Equal parts harrowing adventure and indulgent luxury, taking an international flight in the 1930s was quite an experience. But it was an experience that people who could afford it signed up for in droves.” Alice’s trip probably cost several hundred dollars.
Pan American Airways used Ford Trimotor aircraft extensively. Introduced in 1928, a Pan Am plane accommodated 13 passengers in its earliest model and up to 17 in later models. 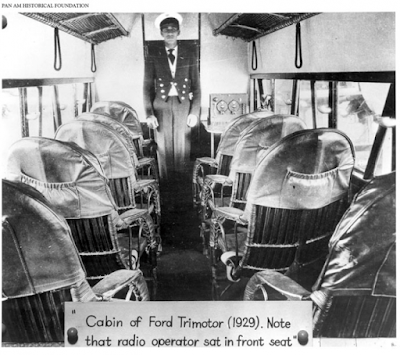 While the advertising and public relations depiction of the glories of air travel were quite enticing, the reality was a different story. 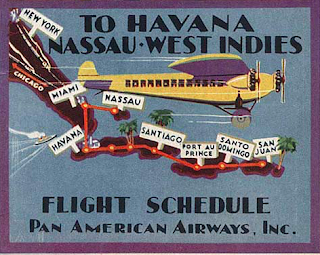 [i]
The noise level in the cabin during flights required stewards to use megaphones to address passengers. At takeoff, the noise level approached pain. With no air conditioning and little heating, the plane was hot in summer and cold in winter, and with no circulation system, its environment was made even more unpleasant by the smell of hot oil and metal as well as disinfectant used to clean up after airsick passengers. Opening a window was the only way to escape the smell. By the late 1920s, Pan American Airways, which flew over water, required extensive first-aid and seamanship training for its steward trainees.[ii] It is noteworthy that Alice opted for a steamship on her return from Puerto Rico, the SS Coamo docking in New York on December 2, 1929.[iii]

The purpose of Alice’s trip was to visit her aunt, Eleanor Butler Alexander Roosevelt and Ted Roosevelt. Ted, son of president Teddy Roosevelt and father of children who as adults would develop Pine Knoll Shores, had been appointed governor of the U.S. territory of Puerto Rice on September 9, 1929. He and Eleanor were in residence at the Governor’s mansion, La Fortaleza, built between 1533 and 1540 in Old San Juan.
Ted was governor of Puerto Rice until 1932, at which time he was appointed Governor-General of the Philippines. That appointment necessitated another trip by Alice to visit family in the Philippines in 1933. The PanAm Clippers had not expanded to cross the Pacific at that time, so she took a steamship.

Pan American Airways was founded in 1927 as a scheduled airmail and passenger service operating between Key West, Florida and Havana, Cuba. The following year focused on growth; aircraft, landing rights, terminal facilities and personnel were acquired. Pan American moved operations from Key West to Miami to be more convenient for east coast passengers arriving by train. The move to Miami’s 36th Street Airport was further enhanced when it was established as a U.S. Customs Port of Entry.

Miami to San Juan is 1,400 miles, a flight of less than three hours today. The article from the Beaufort News described a two-day journey with an overnight in Santiago de Cuba. With only the most rudimentary of radio communications, night flying in 1929 was highly risky and avoided.

Interestingly, Santiago de Cuba indirectly played a part in the future establishment of Pine Knoll Shores. Santiago de Cuba was the location of, what was perhaps the most memorable battle of the Spanish-American war, the battle of San Juan Hill. Col. Theodore Roosevelt’s organizational skill and leadership of the Rough Riders during that war brought him fame and celebrity, which contributed to his growing popularity among the masses. This popularity among the voting public supported his selection as a vice-presidential candidate in 1900. The McKinley-Roosevelt ticket won handedly, and when McKinley was assassinated in 1901, Roosevelt assumed the presidency, was re-elected in 1904 and served until 1909. The legacy of his life and presidency added luster to the Roosevelt name for decades. This legacy served his family well and transferred to his grandchildren who developed Pine Knoll Shores.

Soon after the U.S. victory on the battlefield of San Juan Hill and the surrender of Santiago de Cuba, the Spanish sued for peace, ending the 15-week war. The result was the 1898 Treaty of Paris in which Spain ceded ownership of Puerto Rico, Guam and the Philippines to the United States. Given his father’s history, it’s not surprising that Ted Roosevelt, Jr. would become provincial governor of both.

It’s also not surprising that Alice Hoffman never hesitated to call on the Roosevelt name to have her way bureaucrats and politicians and that, adventurous by nature, she would risk a 1929 flight to Puerto Rico to visit the eldest son of the ex-president and her niece Eleanor.

Amazingly, however, the flight took place a little over two weeks after the stock market crash of October 29, 1929, the beginning of the depression, and not long before Alice Hoffman would make the Beaufort News in less light-hearted pieces concerning her countless legal problems, court judgments, and law suits with the county. Her financial woes would lead to the Roosevelt family’s ownership of her Carteret County property.

The Beaufort News issues from 1925 through 1944 are available on the Internet at DIGITALNC, a free service of the North Carolina Digital Heritage Center of the University of North Carolina at Chapel Hill.