When formed in 1974, the stated purpose was “to beautify and preserve chosen areas within the town of Pine Knoll Shores.” But the reality is much more complex and far ranging, much more than petunias and daylilies.

1974, when the club began, Pine Knoll Shores was completing its first year as a chartered town. The country club was still under construction and struggling with financial difficulties.  Shore-line, a one-page newsletter at the time, was celebrating its first anniversary. Town hall was a two-room structure recently moved to Pine Knoll Blvd., a building that started life as the kitchen of Alice Hoffman’s house. City automobile tags were required, house numbers were not, and telephone numbers were five digits. The population of full-time residents was approximately 350.

The first several years of the club saw the start of activities that helped bring the growing population together and offered the opportunity for many people to get involved. A number of these activities brought spouses and family members along. Yvette Bannen recalled those early years, “The ladies were very industrious, and the husbands were like having double the number of Garden Club members. The townspeople pitched in for trash pick-up and work parties because they were doing it for the town, and it was generally a different spirit.” Many of those programs from the early years are still a key part of the club’s schedule, while others are just “remember whens.” 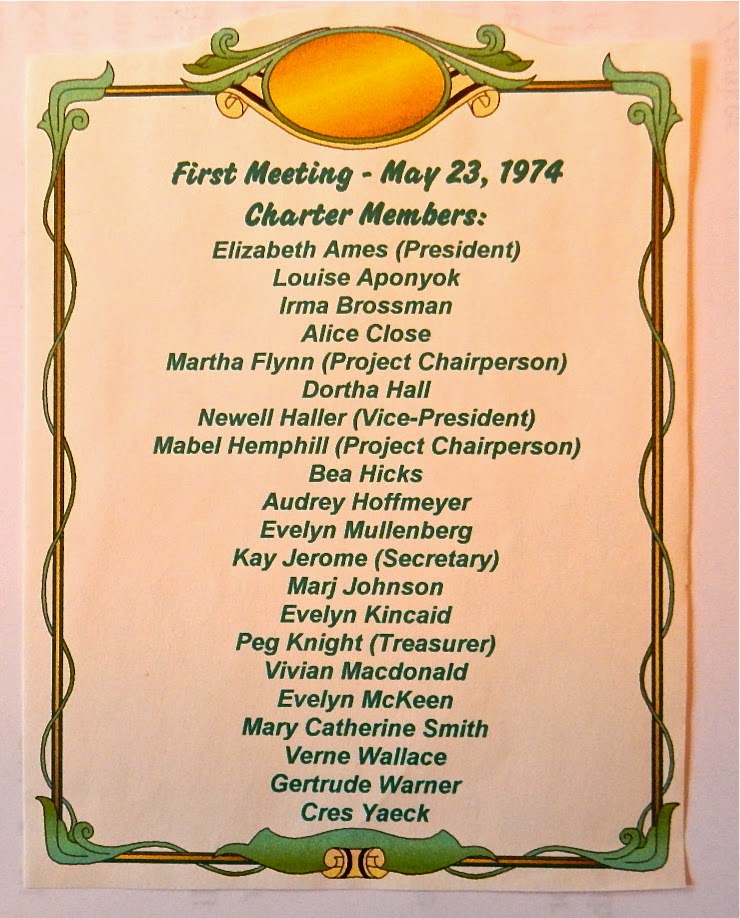 The first meeting was held at the home of Elizabeth Ames, who was elected the club’s first president. The name of the club was chosen, there were 21 charter members and a committee was formed to write the by-laws.

An article in the April 1974 Shore-line discussed the formation of the club: “In April the first official club of the new town began to form. Martha Odell Flynn became its first chairperson. After meeting with a leader of the Garden and Civic Department of the Women’s Club of Morehead City, Flynn and a small group of Pine Knoll Shores’ women decided to affiliate with the Garden Club of North Carolina, a member of the National Council of State Garden Clubs. In the following month, the group officially became the Garden Club of Pine Knoll Shores.” Vivian Macdonald, a founding member of the Pine Knoll Shores Garden Club was an active, and nationally recognized flower show judge. She was influential in the club's participation in various Garden Club of North Carolina sponsored activities, including training classes, garden design challenge, and annual scrapbook and directory competitions. 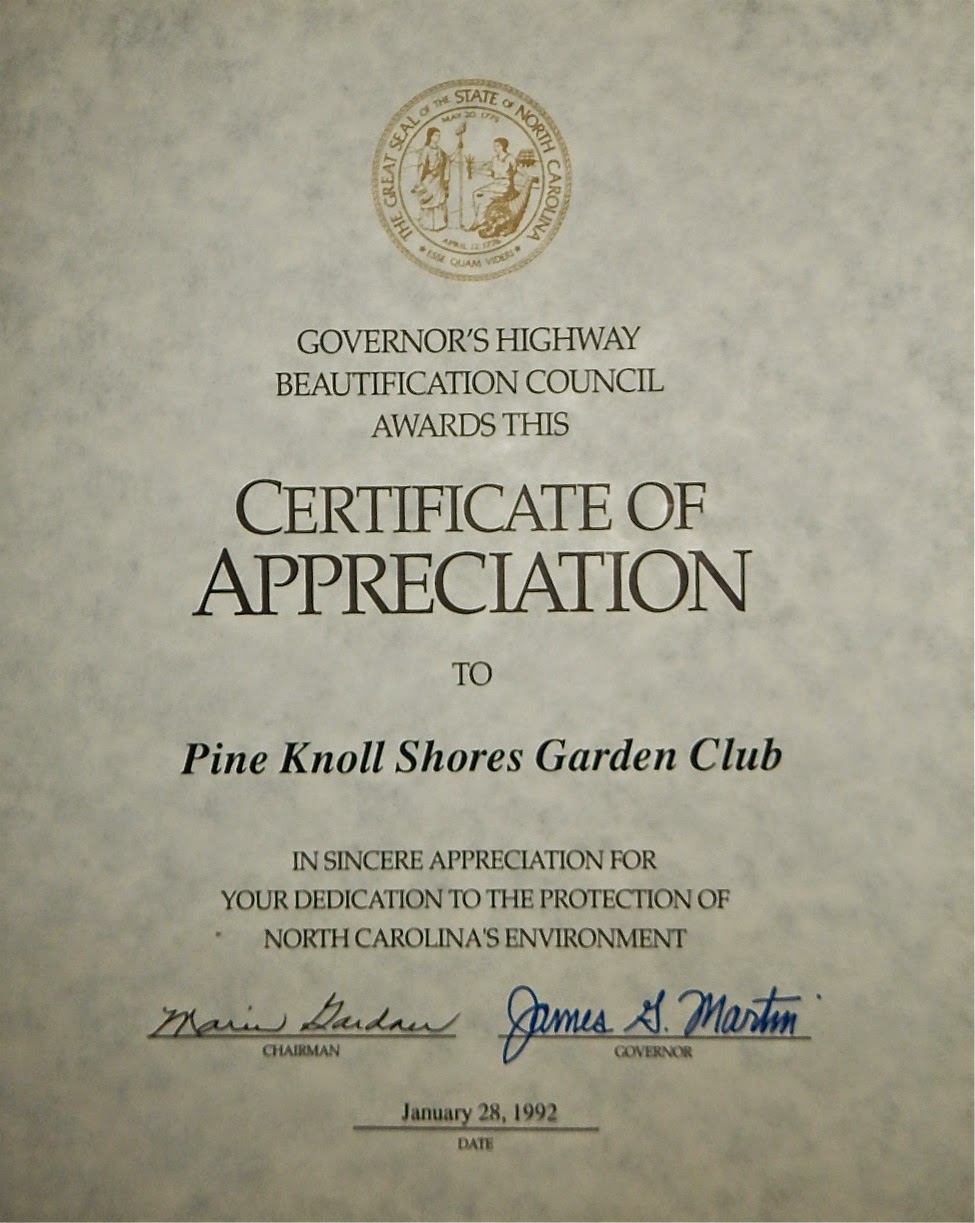 Membership in the State Garden Club continued until 2011, when a majority of the members voted to disassociate from the state group. It was felt that state membership no longer brought value commensurate with the required dues. 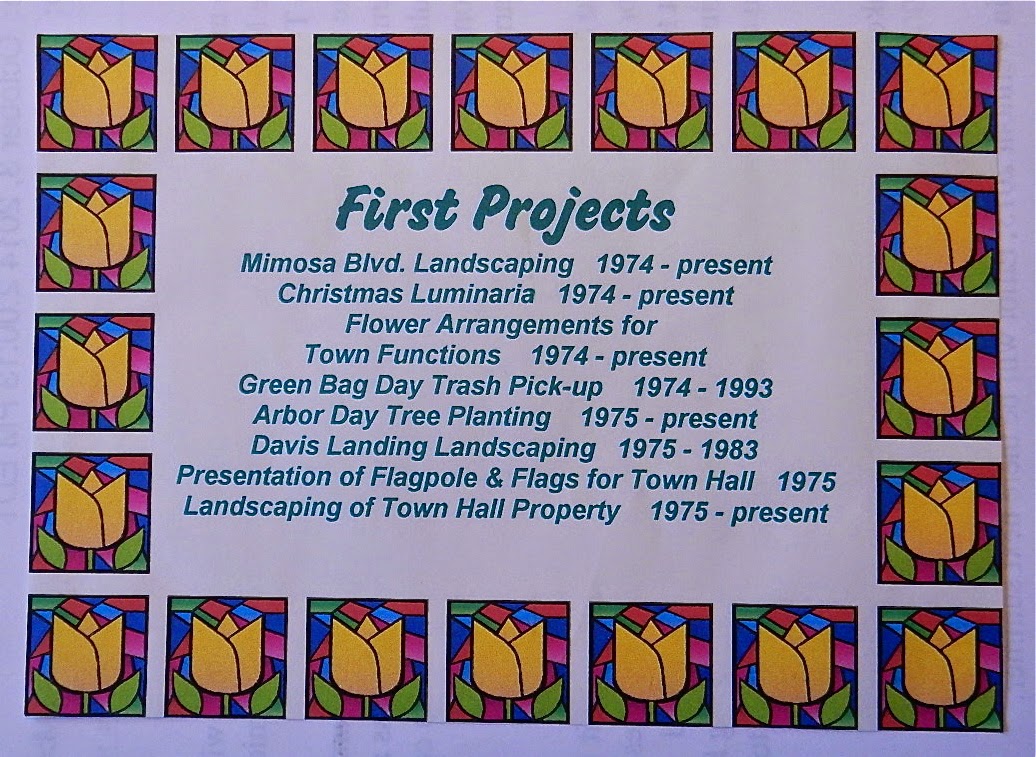 By the mid 1980s, the Christmas Eve Luminaria project had entered its second decade. It had gone from 600 candles to about 4,000. The candles, in sand-weighted brown paper bags, cast a warm glow along the roadways, extending up some driveways and edging the canal in places. This was a major seasonal activity for the club, involving many hands, feet, timing and logistics in less- than-perfect weather at times. There was always concern about a bag igniting and fire spreading to surrounding land, leaves and pine needles. The record doesn’t show a fire here, but the author knows from personal experience how quickly, on a breezy evening, luminaria can spread a grass fire—another call for the fire department on Christmas Eve. In an attempt to lessen the fire danger, the club switched from paper bags to empty gallon plastic milk jugs in the 1990s. A large hole was cut in the side so sand and candle could be installed. While this approach offered a degree of protection from wind and rain, it resulted in some loss of the charm and romance of the original. Safety has a tendency to do that. 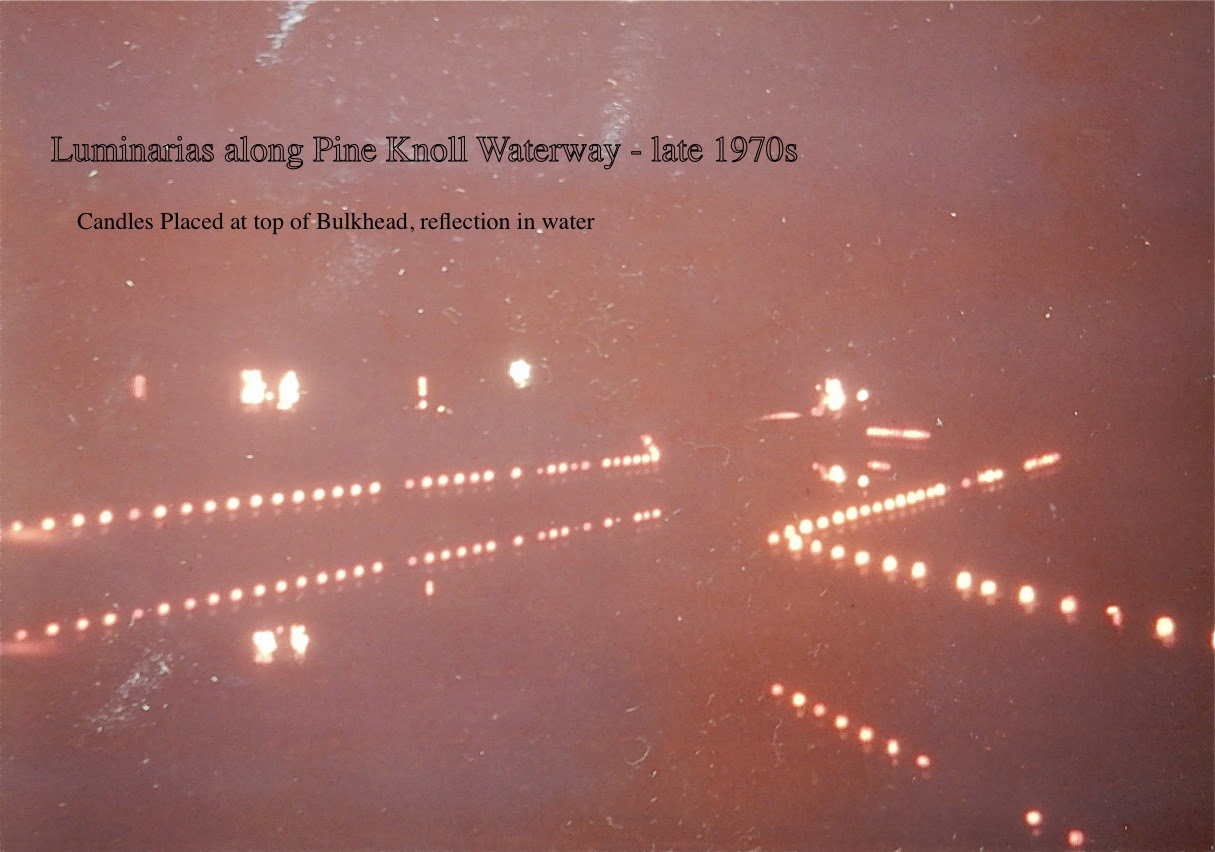 This club-sponsored activity fell victim to the growing complexity of the project, decline in participation and increased travel by many residents away from home for the holidays. The tradition is still carried on by private local groups. Look for luminiaria if you get a chance to tour the town on Christmas Eve.

The first Green Bag Day was held in February 1975, when many Garden Club members, husbands and townspeople picked up trash along the roads and other public areas. Three truckloads of trash were collected; afterwards, the workers enjoyed a chili lunch served by club members at the home of Mr. & Mrs. C. Franklin Johnson. 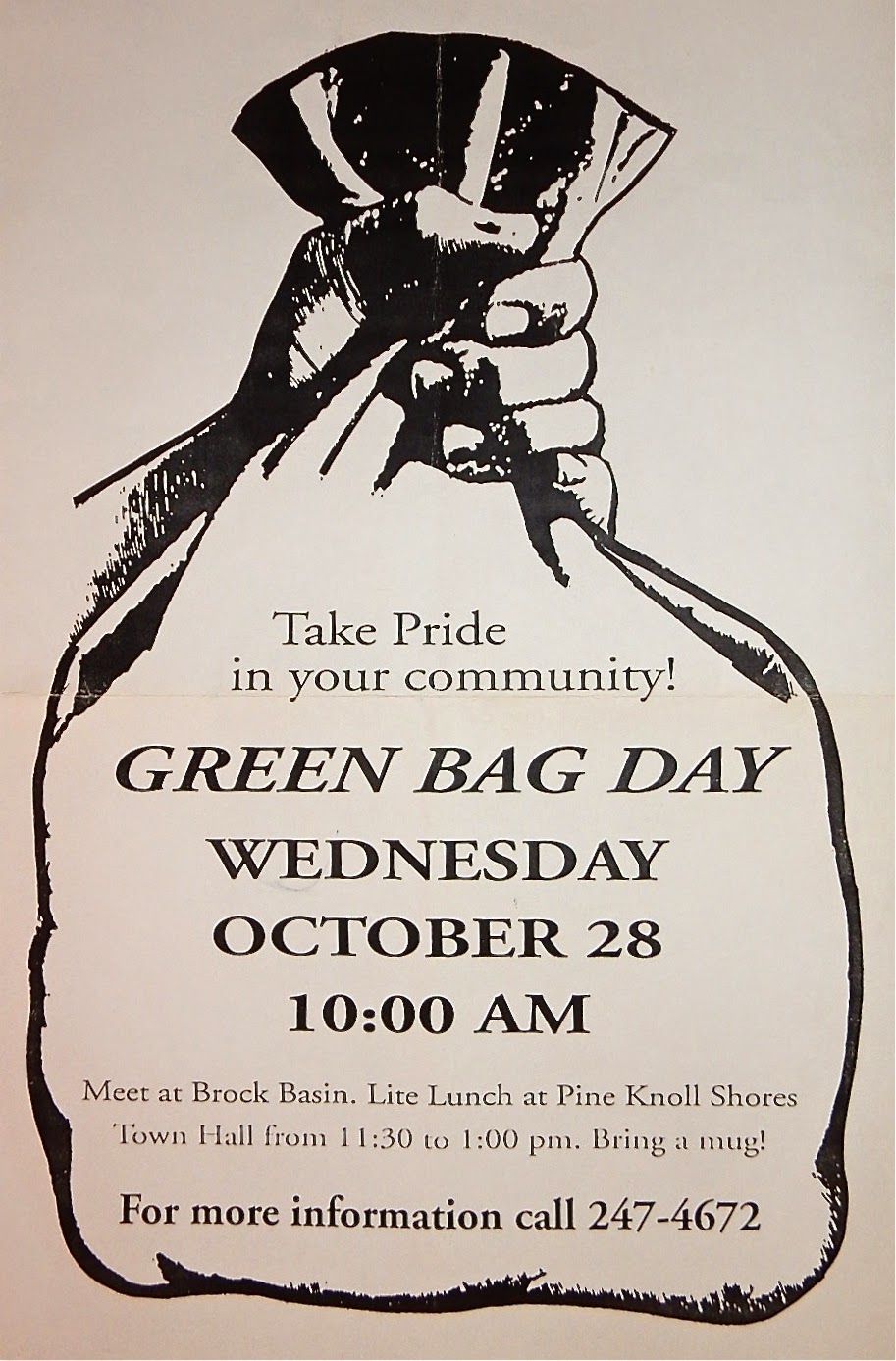 This post-cleanup lunch became a tradition, and for the next 15 years, chili was served. A friendly competition evolved, focusing on who could make the best chili; recipes were passed around and modified. In addition to the chili, lunch included French bread, salad, cookies and a drink. It seems the beverage of choice to accompany the chili was cold beer.

Interestingly, all pictures in the Garden Club annual scrapbooks show volunteers filling black plastic bags. The derivation of the name “Green Bag” seems to have been lost with the originators. Some think green plastic bags were used the first years; others speculate the name refers to the environmental movement since Earth Day was gaining favor. Perhaps it was a combination of those two factors—one starting the name, the other sustaining it.

This approach of including a strong social element to the Garden Club’s various activities has been a part of its philosophy from the beginning.  Hospitality hostesses are appointed for each project—whether it involves a guest speaker, garden tending, wreath & plant sale, or just a monthly meeting—to see that appropriate refreshments are available, and time is set aside for “getting together."

When the town was in its formative stages, the Garden Club’s organization of Green Bag days was a major step toward keeping the roadsides and public spaces neat and tidy. In the 1970s and 1980s, there were many more undeveloped lots throughout town. Over time, that changed, with most available land containing an occupied home. Two other factors came into play that lessened the need for the Green Bag day: the growth of town government and of homeowner associations (HOAs). As town government grew, town staff members began to handle much of the maintenance. And, with an increasing number of HOAs (currently 25) covering most all of the residential developments, each HOA looks after its own property. Accordingly, the club deemed Green Bag Days had fulfilled their purpose, and the last was held in 1991. The Garden Club’s effort has instilled the sense that it’s everyone’s duty to keep our town neat and tidy.

Plant sales have been a tradition with the Garden Club nearly from the beginning. The funds raised are used to beautify the town. Through the 1990s, plant sales were well attended and successful in both raising funds for the club and expanding the diversity of plants in home gardens. The falloff in attendance at club-sponsored sales coincided with the arrival of big box stores in the area. The vast selection, constantly changing stock, and low prices are hard to compete with. 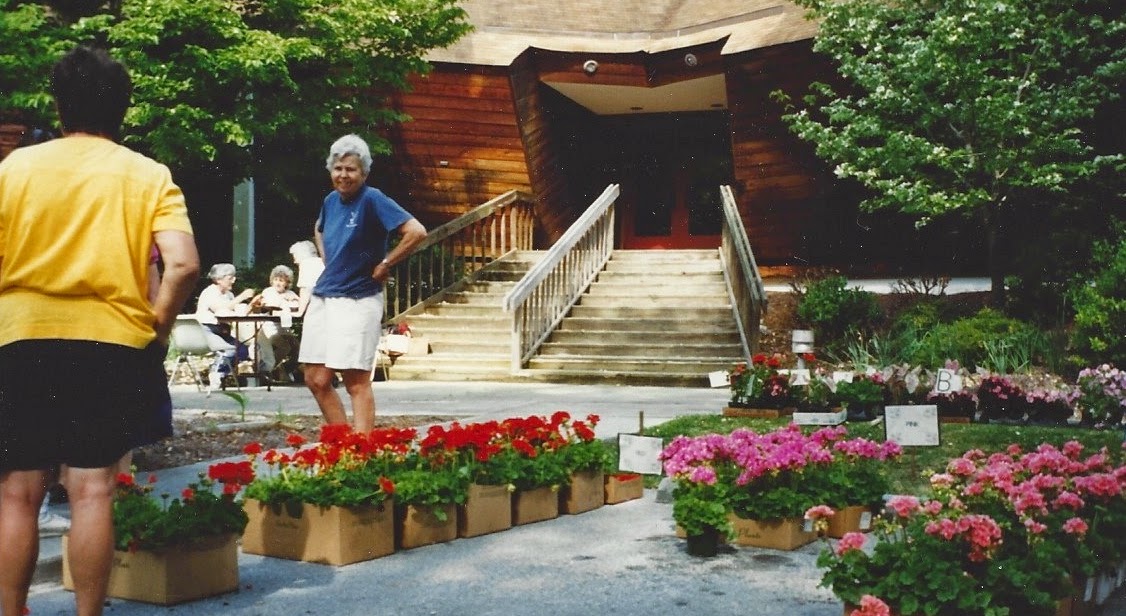 In the same vain as plant sales was an effort the Garden Club undertook in1997 in response to the Southern Pine Beetle infestation. The effort was given a big start when Lee and Connie Parker donated 500 longleaf pine saplings to the Garden Club to distribute to townspeople.
The Garden Club purchased an additional 1,000 seedlings to start the reforestation process. This project was named “Cut One – Plant One.”

In 1998, the Garden Club was the astonished recipient of a $10,000 donated by the family of Peg Hereth because “the Garden Club meant so much to her.” Many ideas were considered for the use of the money, but it wasn’t until her husband Lee died six months later that it became apparent that the money should be used in a public area of town as a memorial to both of them. After much contemplation, a memorial garden in front of town hall was established. Today, Garden Club members maintain that garden, and a trust fund exists to help defray the costs. 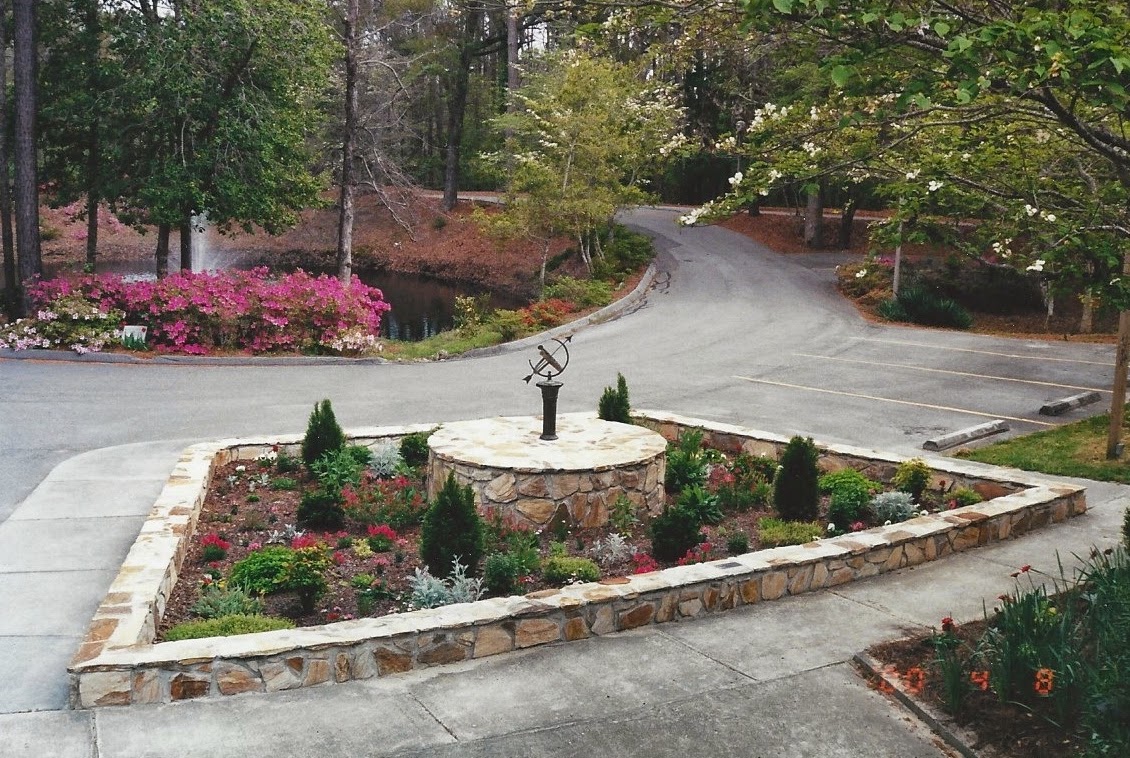 One of the projects mentioned in the “First Projects” image above was “Mimosa Blvd Landscaping.” That activity continues today. Over the years, the club has taken on other public gardens as well. They include the planting areas at Dogwood and NC 58, the divider at Oakleaf and NC 58, the gardens at the light on Pine Knoll Blvd. and the gardens at Roosevelt Drive. In addition to the perennials planted at each location, flowering annuals are changed out with the season to maintain color and interest. Look for these signs around town. 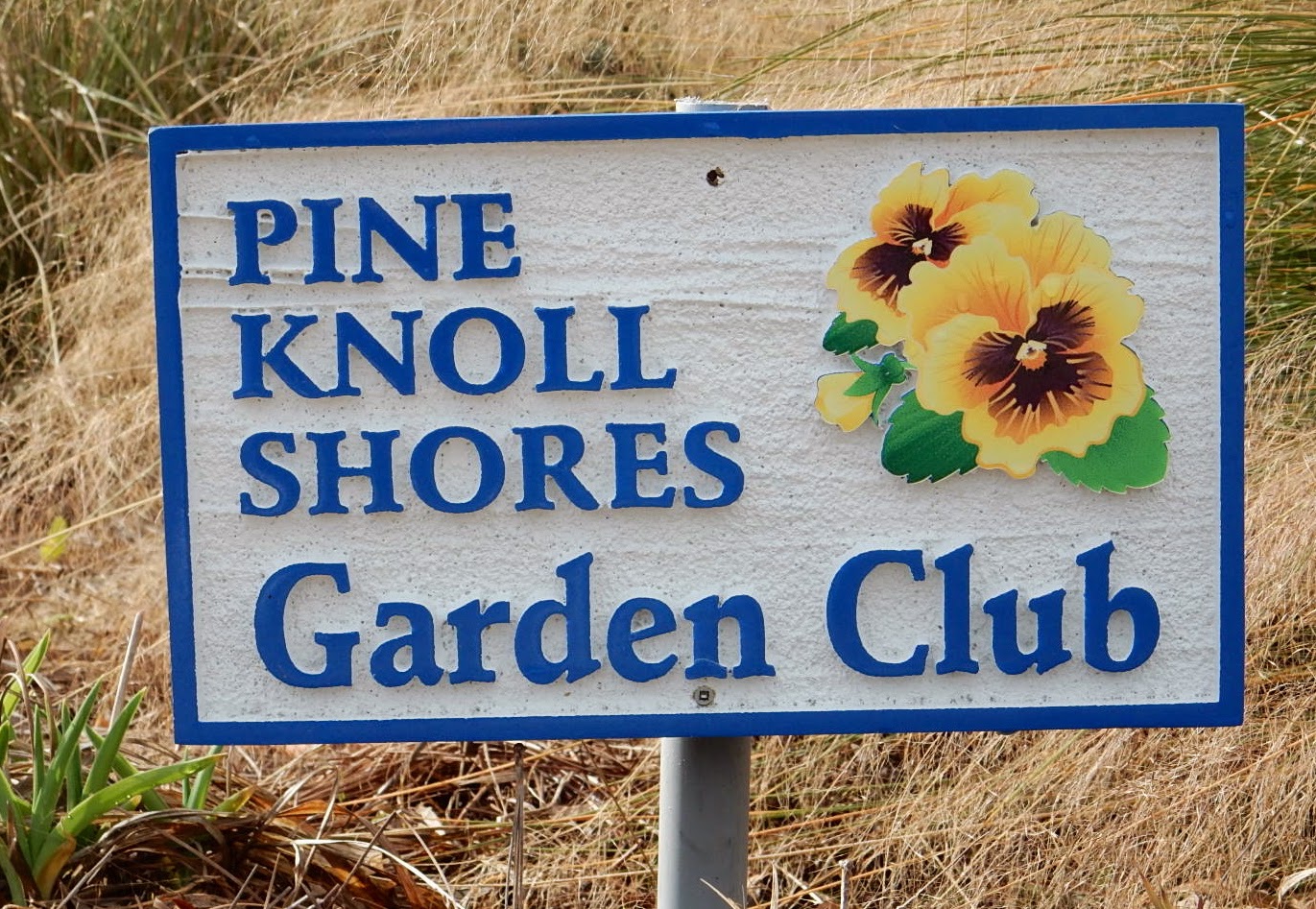 This post presents just a small sample of the activities of the club. Its activities have changed with the times; each year brings new programs as well as continuation of ongoing activities. The Garden Club meets monthly on the second Wednesday in town hall. Guests and new members are always welcome Meetings start at 9:30 a.m. with refreshments and social time. All meetings have a short business portion and then either a guest speaker, a demonstration or an activity. Come join your neighbors. Get some dirt under those fingernails.

-----------------
Post Author: Walt Zaenker, with assistance from Mrs. Zaenker, Yvette Bannen, and other club members
To contact the author or the History Committee pkshistory@gmail.com