A first time visitor when coming across a place with the odd name of Radio Island may, for a moment, wonder about the derivation of the name. It probably wasn’t named by European explorers in the 16th Century or Native Americans or even some early settlers. It was, in fact, first named Inlet Island.

Inlet Island was created in the mid-1930s as part of the effort to build port facilities at Morehead City and deepen the ship channel. Some dredging spoils were used to raise the land on which the port was constructed, and other spoils were deposited on marshland across from the port. The island created on that marsh was given the name Inlet Island. During World War II, the port played a major role in naval efforts along the Carolina coast.

Below is a 1939 aerial photograph marked “Confidential” that shows the port, Inlet Island and newly dredged ship channels. The channels by 1939 were charted as being 36 feet deep from the port to the open ocean. In 1943, the U.S. Navy leased the entire port facilities including Inlet Island for the war effort and built servicing facilities as well as loading ramps on the island. 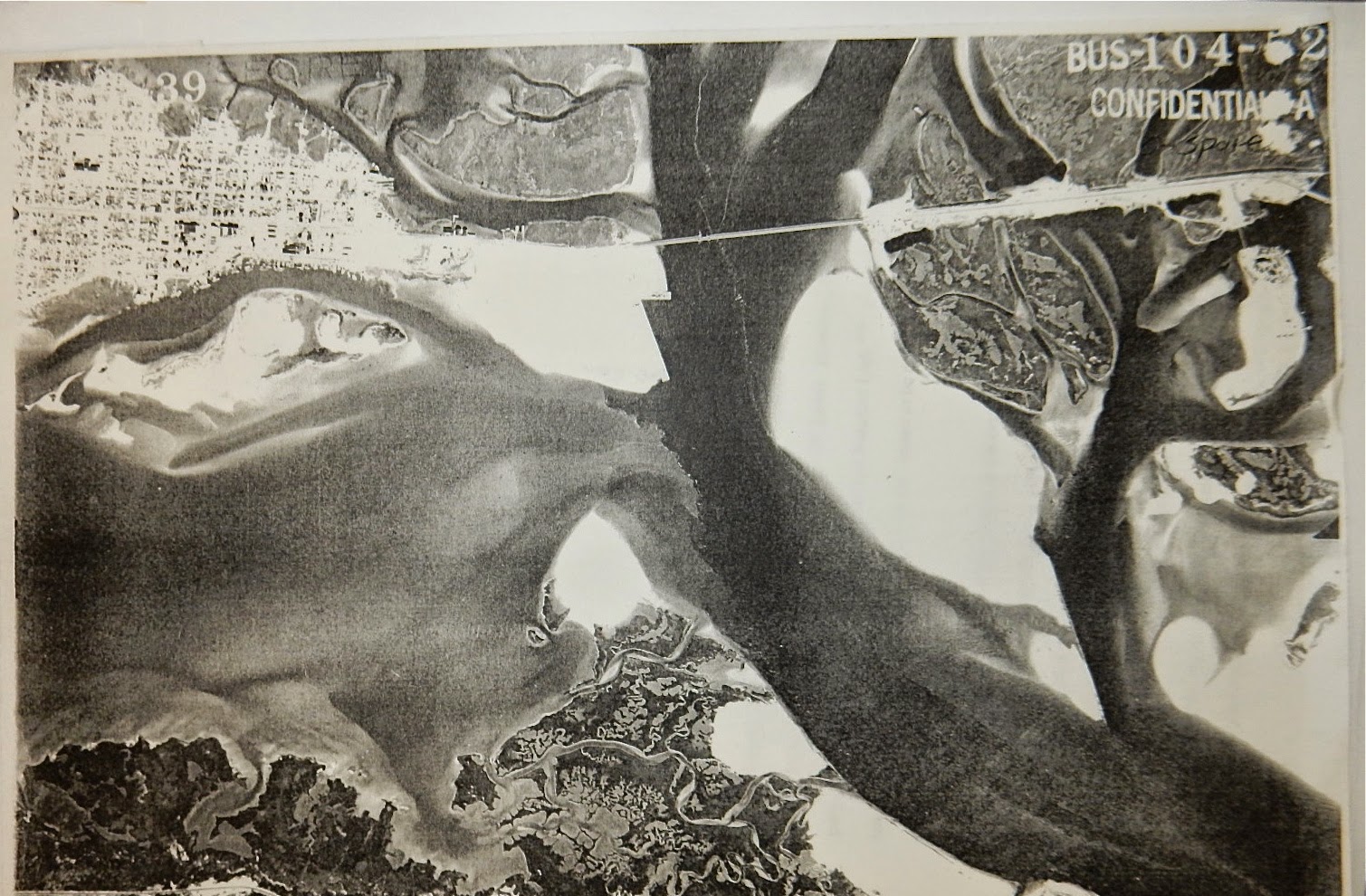 After the war, the island was sold to private coastal investors. In 1947, investors, operating as Carteret Broadcasting Company, Inc., constructed a 280-foot tower on the island. During July 1947, station WMBL broadcasting on 740 kilohertz commenced operation. It was during this time that the Inlet Island came to be called Radio Island. 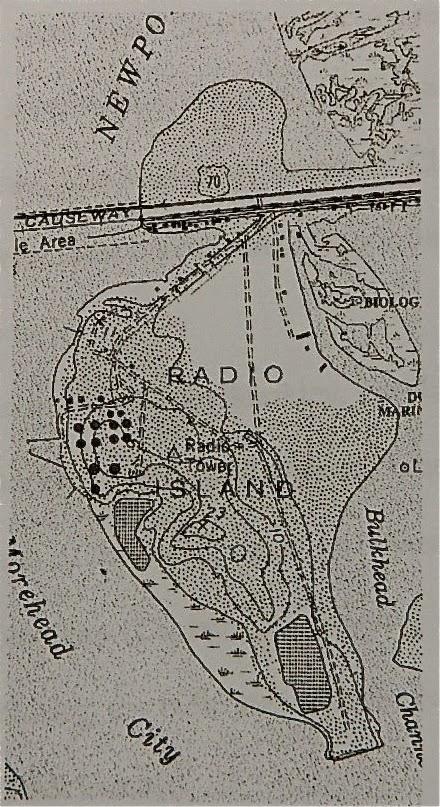 The launch of WMBL, the first radio station in Carteret County, was a landmark event in the lives of the local population, which probably included those on Bogue Banks.  Having a local station provided a strong signal and clear reception. This event was the lead headline for the July 17, 1947, issue of the The Beaufort News: “WMBL to Begin Broadcasting in Daylight Hours this Weekend.” The article goes on to describe the station. It “will feature United Press news, music by two transcription services and records, as well as local talent.” AM (amplitude modulation) radio was the predominant over-the-air communication technology available at the time. Shortwave was also available and some long distance commercial communication. FM (frequency modulation) radio and TV were still in laboratory-development stage, but soon to come on the scene.

In the “golden age” of radio—1930s and 1940s, call letters originally had meaning. The Carteret Broadcasting Company owners named their station WMBL after the initials of their first names. However, the station’s marketing manager quickly changed that to “WMBL - Where Morehead and Beaufort Link, 740 on the dial.” Even though WMBL only had a 1000-watt transmitter, it regularly had listeners up and down the east coast since Radio Island was conducive to sending a good signal. This creative marketing manager was also likely responsible for calling the location Radio Island, initially as a promotional gimmick, which eventually took hold.

The following reminisces from John Hook and Julius Adair on Beachshag.com give a feel for growing up in the 1950s and 60s in the local area:

I listened to basically two radio stations as a teenager. WMBL 740 AM, Morehead
City, NC and WBMA, Beaufort, NC. These were 1000-watt stations.
A girl named Bobbie Dennis was the afternoon DJ at WMBL. She was bold
enough to play records by The Drifters, Clyde McPhatter, and Big Joe Turner to
name a few. This was one of only two local stations to play R&B music. The other
was WBMA, 1400 AM in Beaufort, NC. A girl named Mel Sheppard and late
another girl named Sandy Pate had afternoon shows and played the same R&B
music. Believe me, this was very bold for this area at that period of time.

The station remained in operation at the island location through the 1960s, then was sold and eventually moved to a location on Little Nines Road. The station was bought by a subsidiary of Clear Channel Worldwide and permanently taken silent in February 2000 to allow  WSCC, 730, in Charleston, SC, to make an upgrade. The building on Radio Island that housed the office, studio and transmitter was torn down, and in the mid 1970s, the broadcast tower was dismantled and removed. 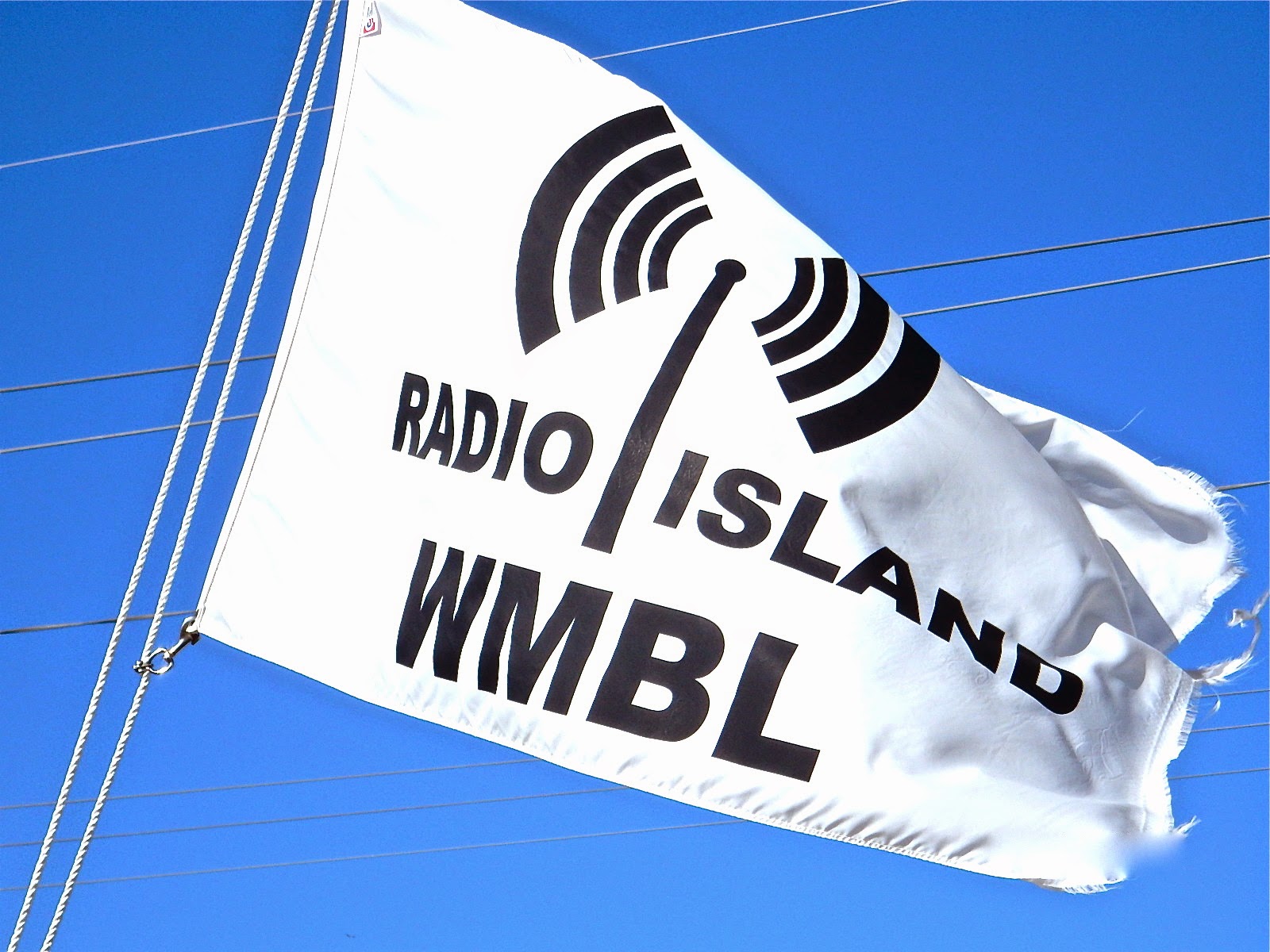 Today the lone acknowledgement of the station's existence is a flag that flies in front of the Snug Harbor Cottages* on Old Causeway Road. Perhaps the owner grew tired of answering the question – Why is this place called Radio Island?

The author wishes to acknowledge and thank Sandra Fauty for her monograph “Radio Island up from Nothing” (no date) available in the archives of The History Place, Morehead City, NC.