Greyhounds, Miss America, Drinking, and Gambling . . . now I’ve got your attention, but you’re probably wondering how am I going to weave those subjects into a story about the history of Pine Knoll Shores.  The story begins a few days back while I was doing research on the history of Bogue Banks Public Library.

I was flipping through some early issues of The Shoreline, which at the time went by the name Pine Knoll Shore Line, looking for early references to the need for a library in Pine Knoll Shores. The word “Greyhound” caught my eye, and I stopped to read the piece. For many years my wife and I’ve had Whippets, which are part of the Greyhound family, thus the sensitivity to the word Greyhound.

Whippets are fairly demanding little dogs, and they expect to be walked twice a day. On these walks, one gets to observe the homes and landscape along the route. One of the more architecturally interesting homes that we would pass was a house on Beechwood built with the structural timbers on the outside, coupled with a number of intriguing post & beam-like features. So when I read this article I knew I had to share this bit of Pine Knoll Shores’ history.

The article is not attributed to a specific writer but the editors at the time were Betty Hammon and Mary Doll, so I’ll give them credit for this wonderful piece, reprinted below, in its entirety, as it appeared in the Pine Knoll Shore Line, issue 43, November 1976.

LOCAL HISTORY: The interesting house going up at the corner of Beechwood and Sycamore makes use of the wood from the old race track. And we know nothing about a race track in Morehead, so we headed straight for William and Nettie Murrill, sure they would know. It was a dog track where the Carolina Racing Association raced greyhounds. The complex was where Parker Ford now stands. Dogs and trainers came up from Florida when the season there was over. Besides grandstands for the public, there was a clubhouse where the elite could sit watching the races sending couriers to place their bets. They could sip drinks (brown bagging), but there was no drinking in the grandstands. Both Nettie and William stressed what a nice place the racetrack was, how orderly. Why, they said, you could take your sweetheart there and not worry that anything rowdy would happen. This was a summer time thing. One night Miss North Carolina was crowned there, crowned by Neva Jane Langley who was Miss America. Dividends paid by the track to Morehead City were used to maintain and improve the streets. There were no Powell Funds for road improvements then. Back in 1951 the dividend paid to Morehead City was $28,000, and increase of $10,000 over the 1950 dividend. But eventually pari-mutuel betting was outlawed by the legislature, and Morehead’s race track became just a colorful memory.

Colorful memories make for good stories, but, as an historian, I am inclined to ask, how much of this tale is true. Can any evidence be offered to lend credence to the several points mentioned in the article? 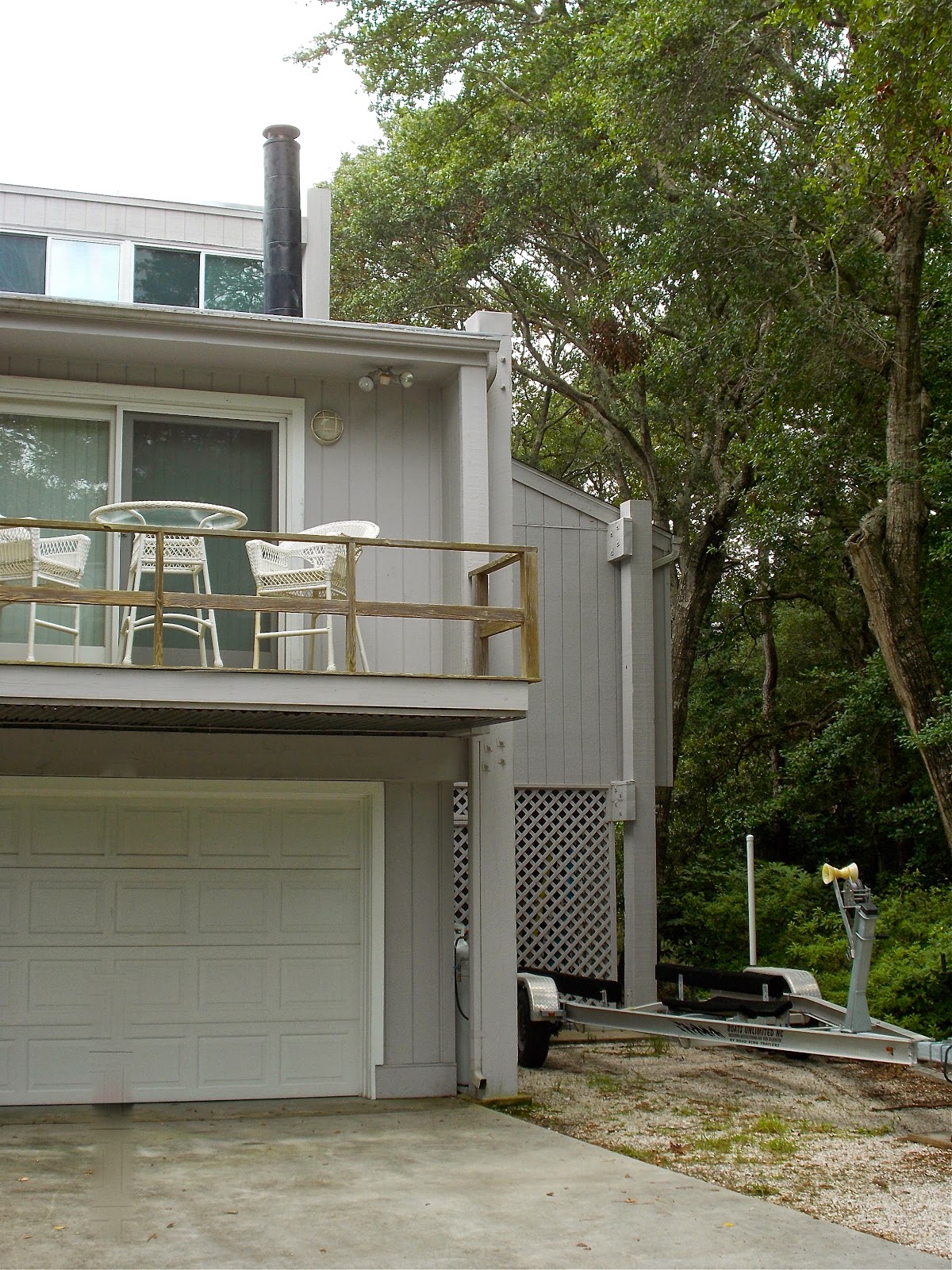 An architecturally interesting house does exist on Beechwood. The picture shows the exposed timbers used in its construction. The house has changed owners several times since being built in 1976, and the current owners are unaware of its background.

In 1939, the North Carolina General Assembly authorized a dog track to be opened in Carteret County. That authorization also legalized pari-mutuel betting on the races. In the period of rapid growth after World War II, promoters of tourism in coastal counties saw dog racing as a means of attracting visitors to resort communities while providing a new source of money to supplement the property tax. 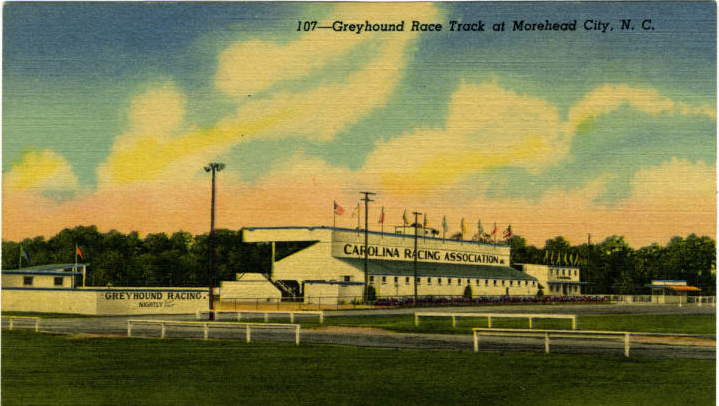 The Carolina Racing Association[i] opened its greyhound track on Highway 70 outside of Morehead City in 1948. The facility was located where the Kmart Store and Parker GMC are today. 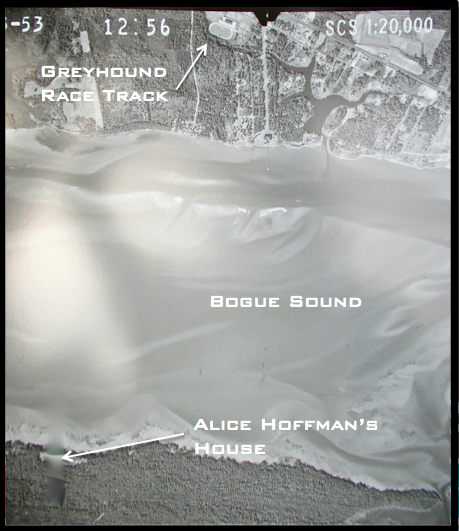 1953 aerial photograph, USDA, National Archives showing the racetrack, located across the sound from where McNeill Park is today.
Races were held nightly during the summer, catering to beach tourists. A similar act was passed for Currituck County in 1949, and the Cavalier Kennel Club in Moyock opened the same year.
The North Carolina Supreme Court ruled in 1954 that the racing law violated the state constitution by granting a monopoly and giving special privileges to a private entity (the racing association), with the additional argument that the legislature had unconstitutionally delegated authority to town voters over a track not located in the town. The city limits of Morehead City at the time did not extend that far west. The General Assembly followed that up by repealing the law authorizing pari-mutuel betting.[ii]
The Pine Knoll Shore Line article’s mention of the common practice of “brown bagging” led to a review of North Carolina liquor laws that prevailed at the time. In the 1950s, liquor by the drink was not available in any public establishment. Those laws did not start to change until November 21, 1978[iii]. The end of prohibition in the mid-1930s was followed by legislation establishing the present ABC system. Beer and wine for consumption on the premises was available, and a private club or social establishment could have a license to accommodate brown bagging, that being the practice of patrons bringing their own liquor, typically in a brown bag. The establishment would provide the glass, ice and mixer, for a price of course.

The six-year experiment with dog racing came to an end, but during its short life, it proved to be popular, generating considerable revenue for the community, and was the venue for at least one statewide event. The 1953 Miss North Carolina pageant was held there. Miss Winston-Salem, Barbara Ann Crockett was crowned Miss North Carolina by the then reigning Miss America, Neva Jane Langley of Macon Georgia. In the immortal words of Bert Parks, “There she is, Miss America....” 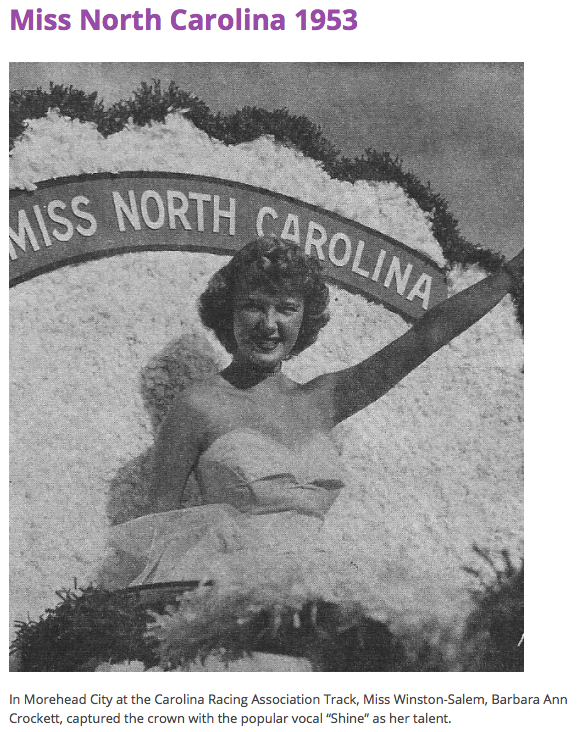 The track stood vacant and unused for many years. Longtime Carteret County residents recall the track not being demolished until the mid 1970s. Whether for reasons of nostalgia, the spirit of conservation, or the desire to have something unique, reusing available large timbers would certainly be in character with the times and the community.

The identities of the architect and builder remain a mystery, but the search goes on. Either could remove any doubt about the use of timbers from the racetrack. It is also possible that the original owners designed the house themselves and had access to the used timbers from the racetrack. The current owners heard from a neighbor that the original owner might have been an architect in Durham. If that is true it certainly fits the story.
Since the original publication of this post, a reader in Falls Church, VA called and shared her memories. Her Father–in-Law, Earl Dunn, built the home. The original owner of the house was not an architect, but did design it, and the large timbers incorporated in the design did come from the racetrack. The caller was so impressed with the timbers she had one transported to her home in Falls Church, where it was used to build a garden bench. Mr. Dunn lived on Holly Road and built a number of homes here during the 1960s and 1970s.

I realize that the connection between greyhounds, drinking, gambling, Miss America and Pine Knoll Shores may be a bit thin, but the 1976 Shore Line article provided an opportunity to bring to light some forgotten fun bits of local history and a flavor of times past.