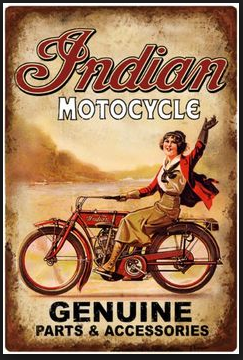 The index to this blog contains many stories that go into various aspects of Alice Green Hoffman’s life and activities, both here on Bogue Banks and elsewhere in the world.  Alice was many things and was described in many ways, but at the core, she was a strong-willed, independent, free-spirited woman who followed the beat of her own drummer.  This story is illustrative of those character traits.

During the time Alice lived in her home “Shore House” on Bogue Banks, she maintained residences in New York City and Paris, France. On one return trip from New York in 1933 she decided to forgo the normal railroad journey or automobile trip for a different mode of transport. She left her home in Manhattan, crossed the East River and went to Nicolo Pisapia dealership in Brooklyn, where she purchased a 1929 Indian Motorcycle with sidecar.
The source for this story is the unpublished manuscript of Mrs. Hoffman’s autobiography that was researched by Kathleen McMillan Guthrie for her thesis. The manuscript and the thesis are held in the Joyner Library at East Carolina University in Greenville, North Carolina.[i]

These source documents do not give a specific model or color but the accompanying pictures are typical top-of-the-line Indian bikes of the era. 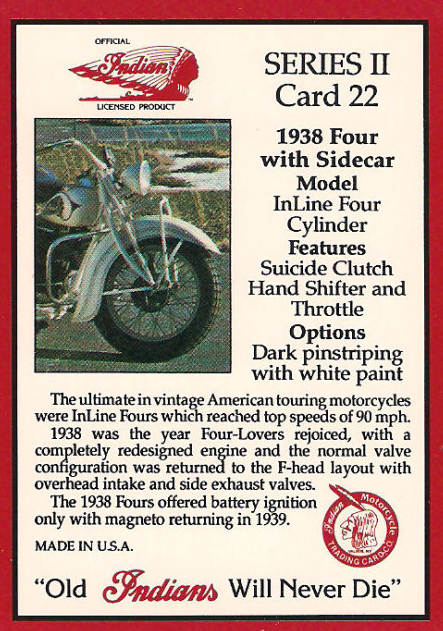 During that period, few colors were available and deep red was the bike’s trademark color. In the early twentieth century, Indian was the largest selling motorcycle in the United States with a reputation for reliability and had great success in various forms of racing.[ii]

With this fine piece of American machinery under them and luggage attached, Alice and her companion and luggage left New York for the trip south.  Her autobiography claims that even the heavy load “did not prevent [them] from making 75 miles per hour all the way from Richmond to New Bern.” If Alice isn’t exaggerating here, she made considerably better time than we would today.

To appreciate fully this trip, we need to keep several historical points in mind.  In 1933, Alice was celebrating her 71st birthday, and for many years, she had been troubled by a chronic hip injury.  At this point in her life she walked with the help of a cane. In 1933, unless one stopped in a city hotel, roadside accommodations were sparse. The concept of the motel was in its infancy.

Alice’s unfinished manuscript does not give a time of year for the trip, but a long distance motorcycle ride on other than a mild spring or fall day is a journey only for the hardy. In 1933, the road system was quite different from what we have today. 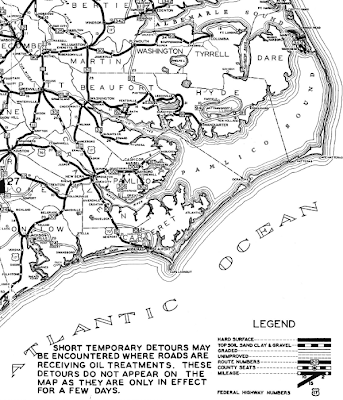 Outside of cities, paved roads were the exception, and those that were paved, were black top, two lanes, no shoulders, followed the contours of the land and were routed around the landscape – up and down, twist and turn. Note: On the accompanying official North Carolina Department of Transportation 1930-highway map, only the solid black roads are paved.  The map also contained helpful driving tips. [iii]

Unfortunately, Alice does not tell us how much she enjoyed the trip or make mention of whether she used that mode of travel again - or whether she wore  “black denim trousers and motorcycle boots, a black leather jacket with an eagle on the back” as described by songwriters: Jerry Leiber, and Mike Stoller.