Some of the most commonly known facts about Pine Knoll Shores are that members of the Roosevelt family owned this land, preserved some of it in a natural state and developed most of it. Covenants they left behind continue to shape the character of the town. The Roosevelt connection came through Alice Hoffman’s niece, Eleanor Butler Alexander. Who was she? How was she connected to the Roosevelt family? Why were her children Alice Hoffman’s heirs? This post attempts to answer these questions while shedding some light on Eleanor’s life.[i] 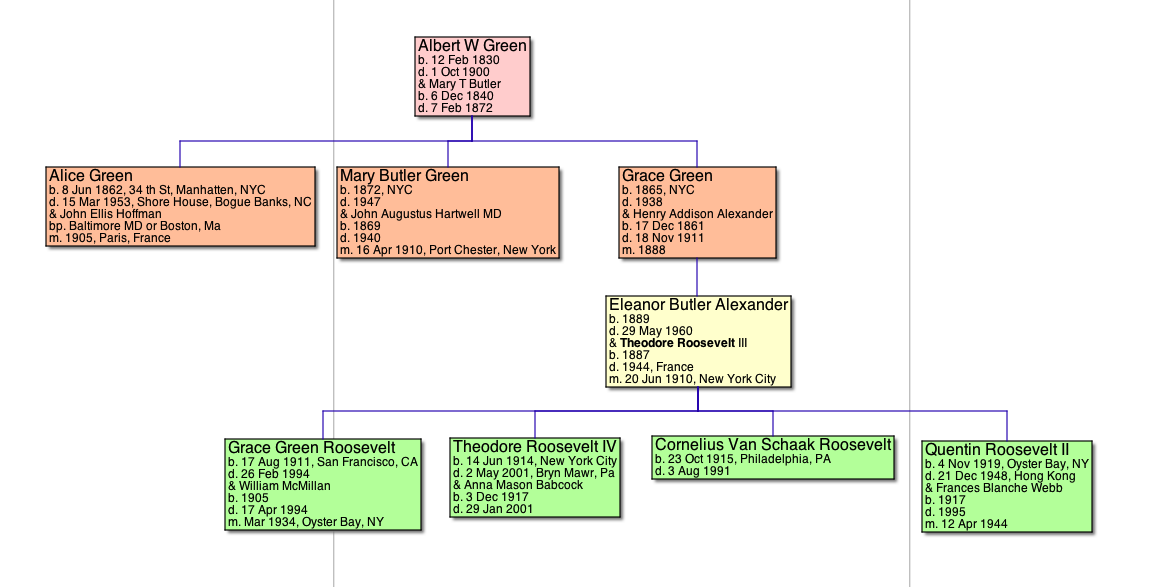 Alice Hoffman returned from Paris shortly before Eleanor’s birth to be with Grace. Then, when Eleanor was 20 months old, she and her parents spent some time with Alice, so a bond developed early. 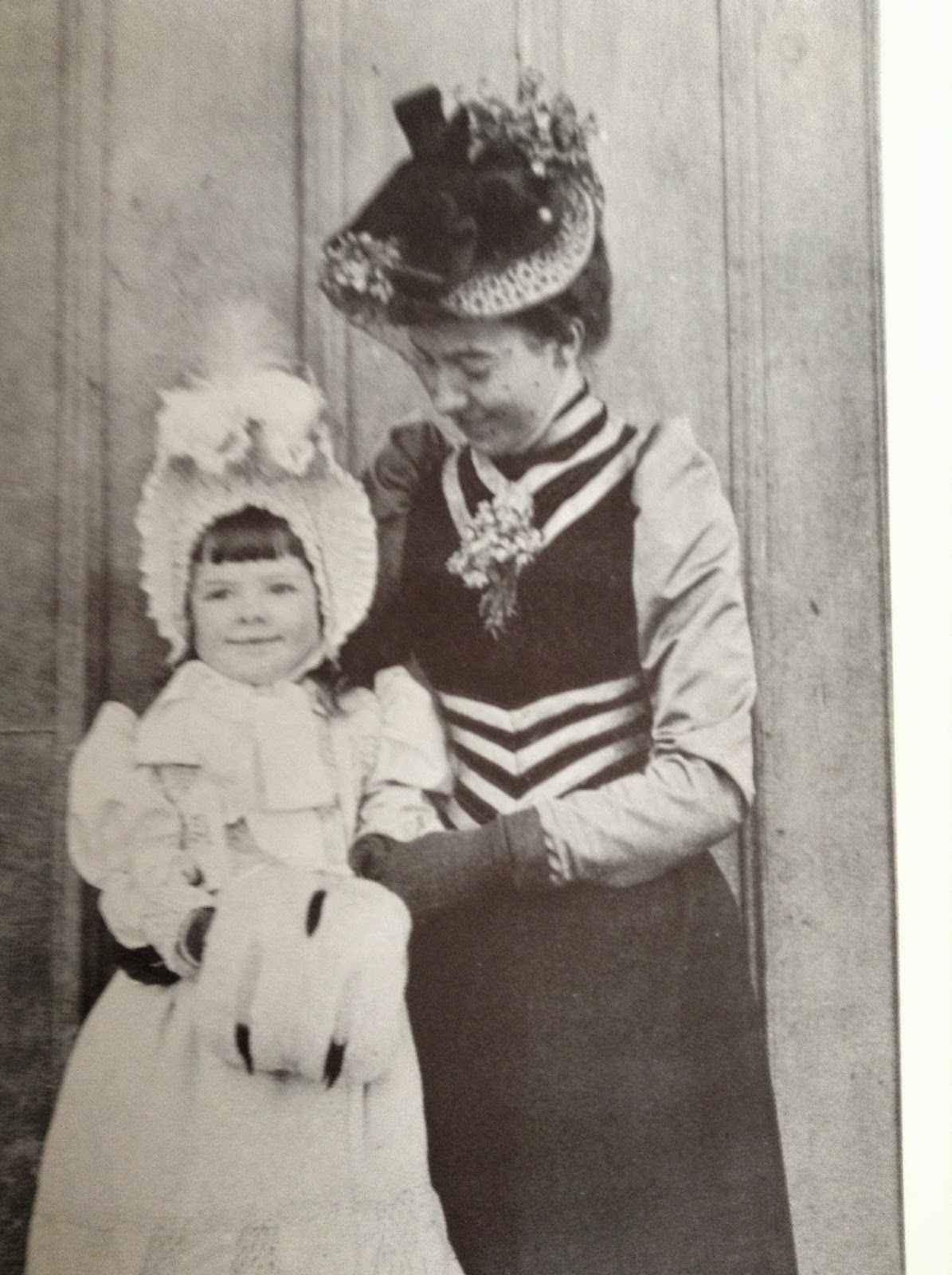 Eleanor at age two with her mother, Grace. Note Grace’s resemblance to Alice.

Eleanor’s parents divorced when she “…was three, remarried when she was five, and divorced again when she was twelve.”[ii] Eleanor’s early childhood was, therefore, somewhat unsettled. “She lived with her mother at the homes of family members in New York, California, Rome and Paris as well as in Scotland with the family of her nursemaid.”[iii]

Unmarried when Grace divorced both times, Alice married in Paris in 1905 and was herself a divorcée by 1910. The two sisters, both divorcées in a social class that at the time did not readily accept divorce, would for some time remain close in support of one another and might be more comfortable being abroad, away from gossiping acquaintances in New York City.

So, Grace travelled with great regularity and took Eleanor with her. Among the family members Eleanor travelled with was Aunt Alice. Eleanor, in her memoir, Day Before Yesterday, recalls that when she was six and living in California with her mother, her Aunt Alice joined them, and they travelled to Rome and then onto Paris. It is at this time that her parents remarried. They moved into what Eleanor describes as “a small house off the Avenue du Bois de Boulogne, now the Avenue Foch.” [iv] They lived there for nearly six years. Aunt Alice was their neighbor. She also had a house on the Avenue du Bois de Boulogne, a large one. 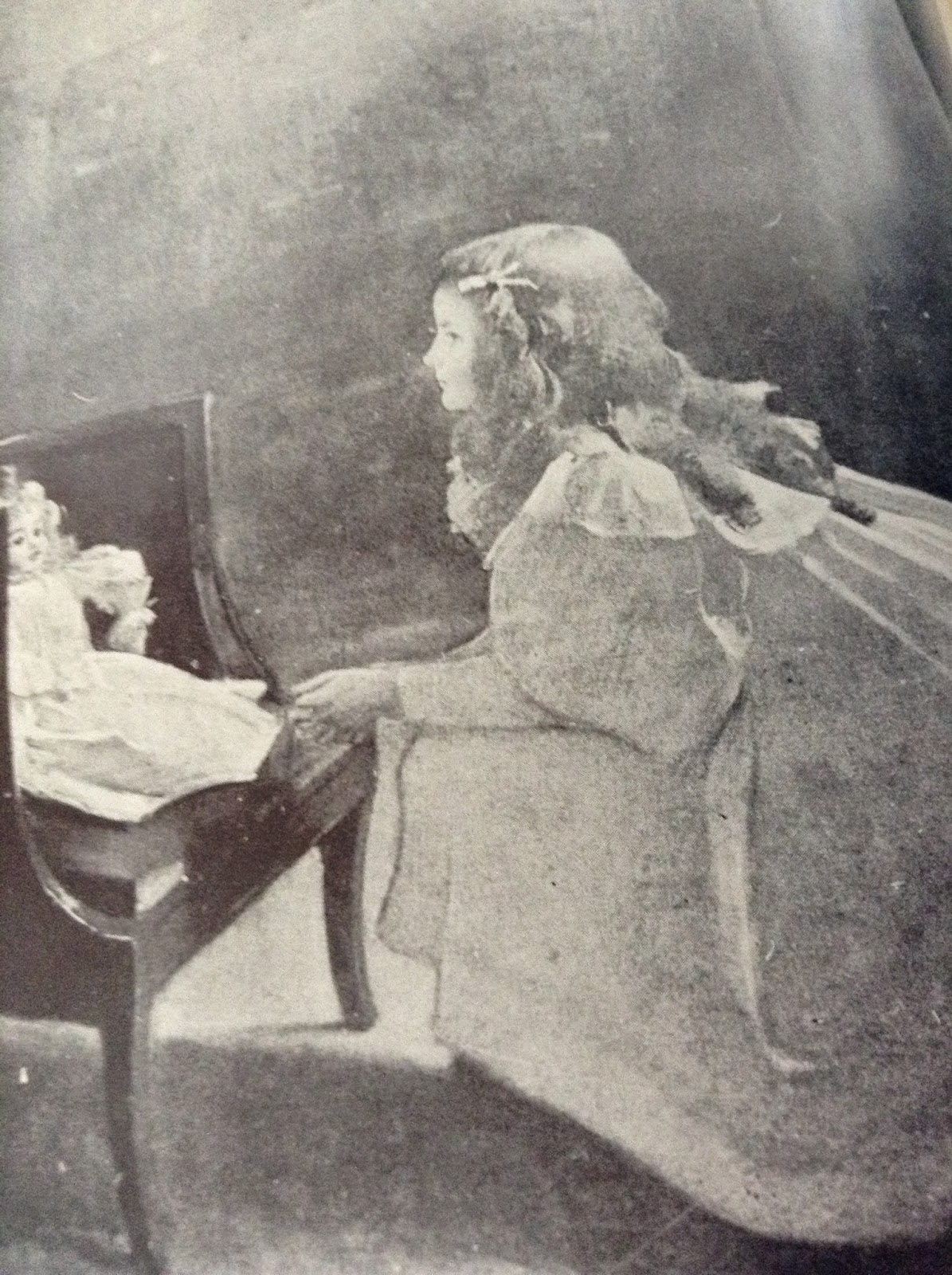 When they were all living in Paris, Grace would take Eleanor to Scotland in the summer. When Eleanor was nine, she went with her mother to Palm Beach, Florida. Her mother’s father, Grandfather Green, accompanied them.

After living in Paris for six years, Eleanor was delighted to return to New York City, where she resumed the more normal life of an American school-age girl. She and her mother rented a small brownstone on West 45th Street, not far from her Grandfather Butler’s, where her Aunt Alice had lived as a child.

Describing their style of living, Eleanor says, “Our house was small, but we had the usual household that most of our friends seemed to have…. We had a cook, kitchenmaid, parlormaid, housemaid, and lady’s-maid, all Swedish but the last, who was French.” They also had an Irish footman. She later says, “I never did my own hair or put on shoes and stockings myself until after I was married.”[v]

For such a pampered child, often described as sickly, underweight and suffering from migraine headaches throughout her life, Eleanor was a woman of amazing stature, daring and accomplishment. The dramatic event that changed her life was meeting Theodore Roosevelt, Jr., son of President “Teddy” Roosevelt.

He was brought up in a very different manner than Eleanor, in much more rustic surroundings. Ted described his home as a “zoo,” referring humorously to all the animals they had. Eleanor was initially intimidated by being at a social gathering with a Roosevelt, but soon found how unassuming Ted was. 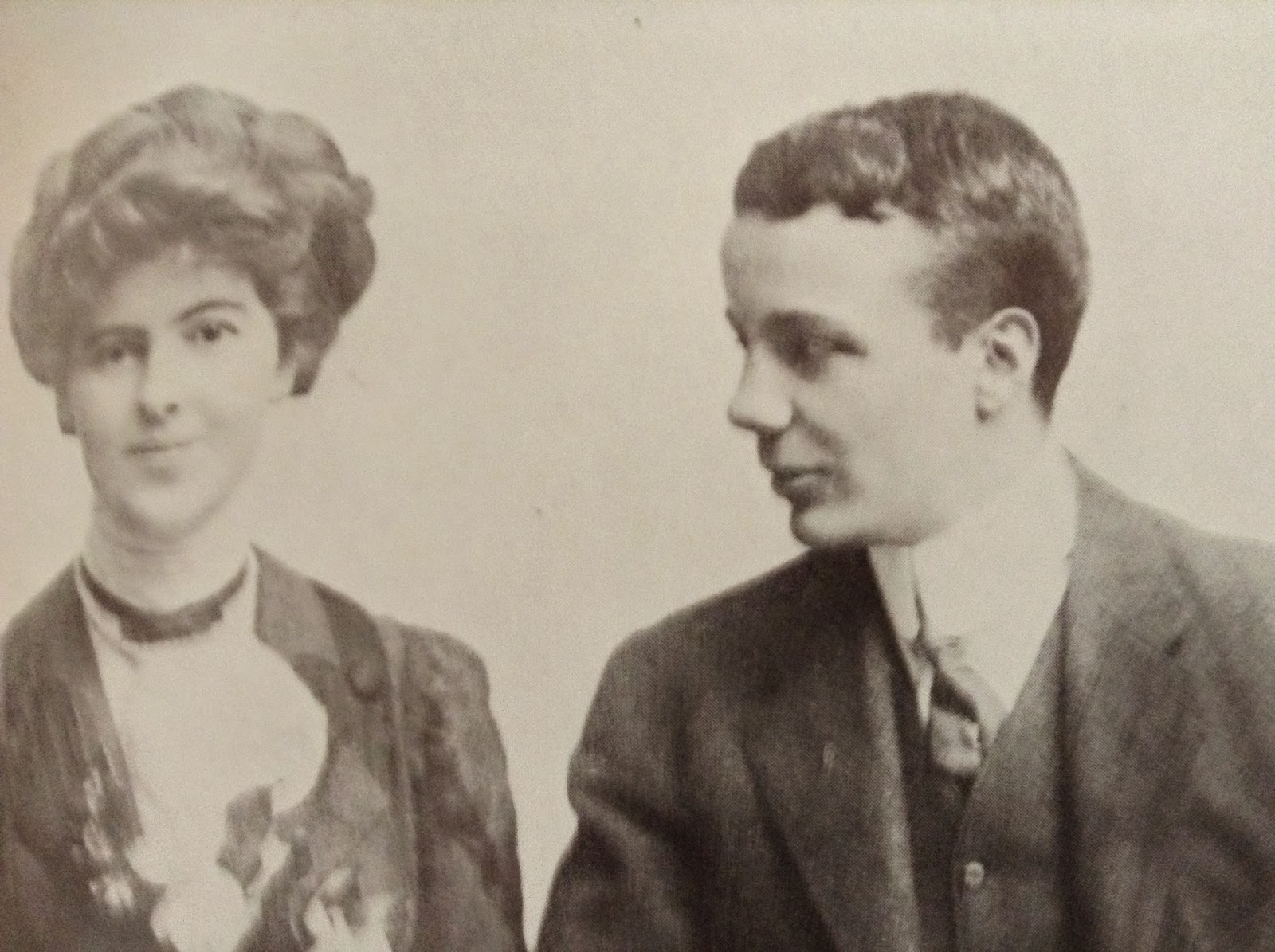 Here is the notice of Eleanor’s marriage to Theodore Roosevelt on June 20, 1910: “The wedding of Theodore Roosevelt, Jr., eldest son of the ex-President and Mrs. Roosevelt, and Miss Eleanor Butler Alexander, only daughter of Mrs. Henry Addison Alexander and a great granddaughter of the late Theron Butler, took place at 4 o'clock yesterday afternoon in the Fifth Avenue Presbyterian Church, Fifty-fifth Street and Fifth Avenue.”[vi] Approximately 1,500 guests attended the ceremony, including 500 of President Theodore Roosevelt’s Rough Riders. Her Uncle Henry Sanders, her namesake’s husband, officiated.

Most of Eleanor’s memoir Day Before Yesterday is a description of her life with Ted, Jr., and an exciting life it was. She emerges as an adventurous, creative woman, known for her needlework and photography as well as for being Mrs. Theodore Roosevelt, Jr. Never content to be just a stay-at-home mom, she travelled the world with Ted—to war sites; on hunting expeditions in India, Nepal and elsewhere in Southeast Asia, shooting large game while riding on the back of an elephant; to Puerto Rico and the Philippines, where she served as first lady while her husband was governor; to Japan, where she dined with royalty; to China, where she dined with heads of government and barely escaped alive when the Japanese invaded; throughout the Mideast; and, of course, the United States and Europe. 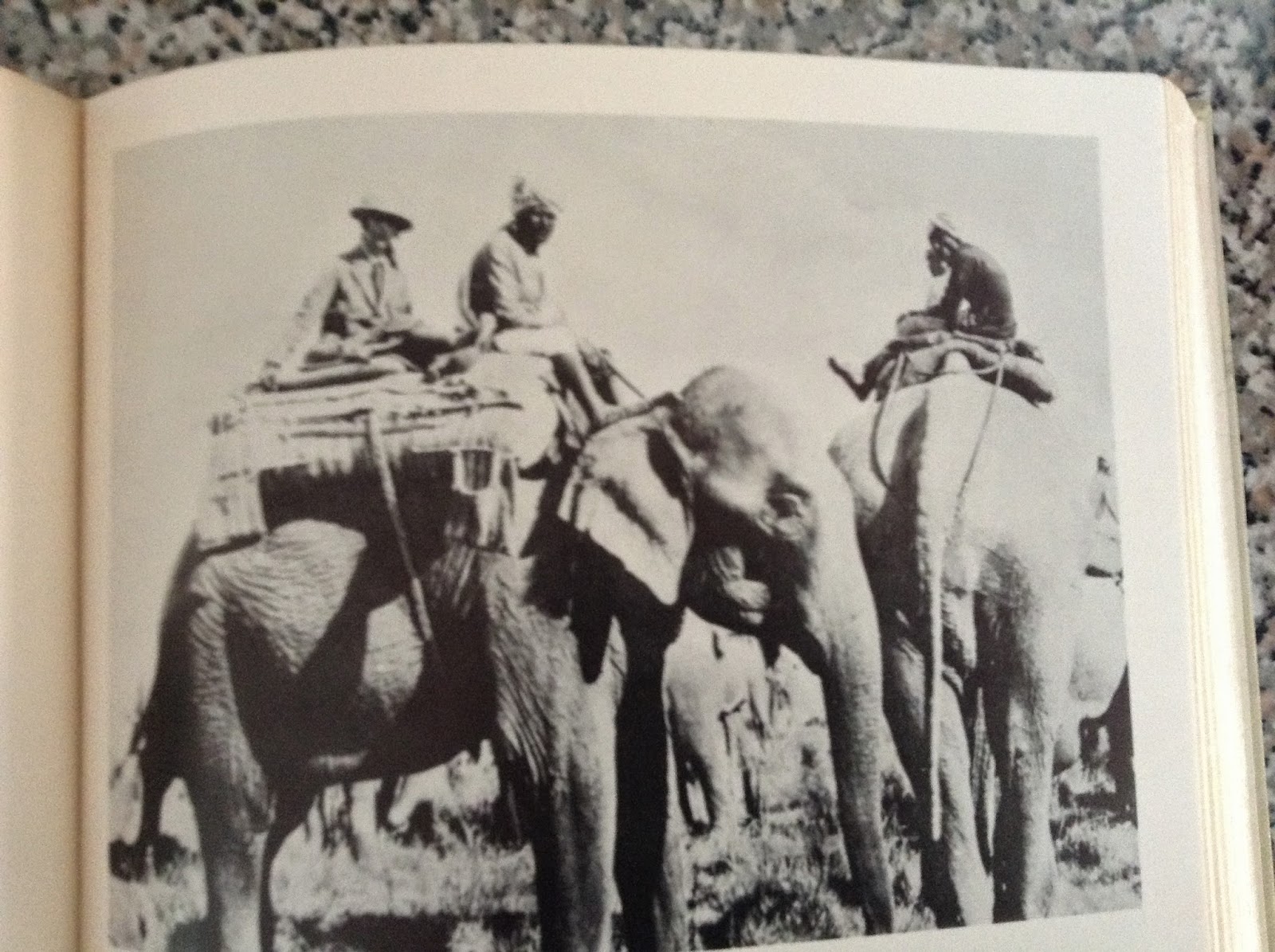 Left: Eleanor on elephant in Nepal. 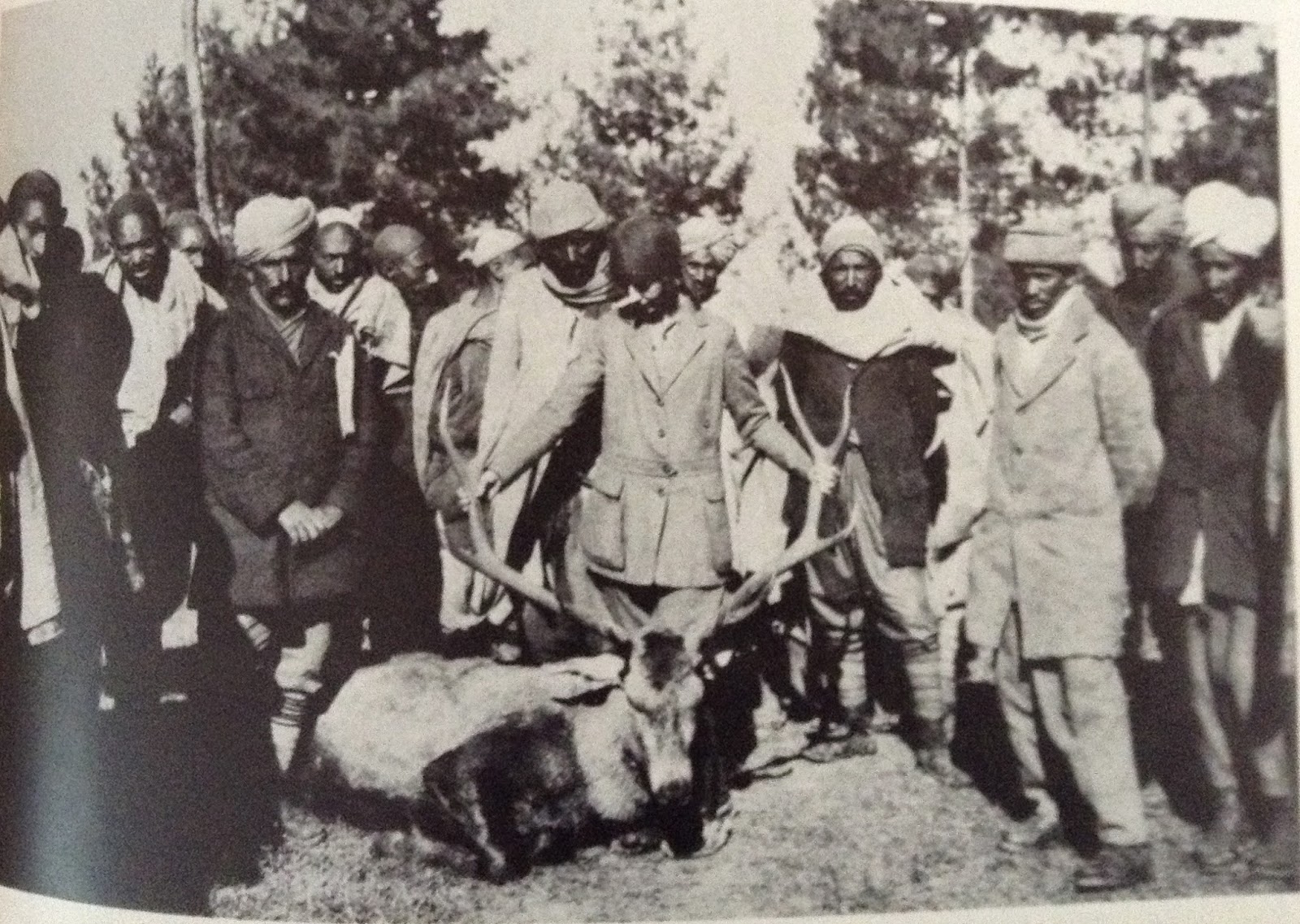 Center: Eleanor proudly displays the rack of a barasingha she shot in Nepal.

Her husband was in both World War I and World War II and rose to be a brigadier general. In 1917, when he enlisted to fight in World War I and was sent to the French front, they had three small children—Grace, 5; Teddy 3; and Cornelius, 1 1/2. Yet, Eleanor was determined to follow her husband to France. She left the children with her mother and went to Paris, where she stayed, under conditions of strict rationing, at her Aunt Alice’s house, while Alice was stateside buying property on Bogue Banks from John Royall.

While in France, Eleanor toughed difficult conditions to open YMCA clubs for troops throughout the country. She also designed a uniform for the YMCA women volunteers to wear. In England during World War II, she established a Eleanor in the snow with Major General Frank Parker and her husband Ted in France during WWI. The cape and hat she is wearing are part of the uniform she designed for YMCA canteen volunteers.

social club for troops. Both her World War I and World War II accomplishments won her honors.

In between wars, she and Ted had an active life. Ted was not only a businessman and editor of Doubleday, he was involved politically as a member of the New York State Assembly, Assistant Secretary of the Navy, candidate for governor of New York and then provincial governor of two U.S. territories. Eleanor was always at his side and sometimes on the road making speeches for him. They travelled extensively.

Eleanor’s Aunt Alice also was well traveled and visited many of the same places not only in the United States and Europe but also in Puerto Rico, China and Japan. Strangely, Eleanor in her memoir never refers to her aunt after early entries about World War I. We know from Alice’s autobiography that Eleanor visited her only once on Bogue Banks, but Eleanor never refers to that trip, which would have been shortly after World War I. Around the same time, Ted's mother, Mrs. Teddy Roosevelt, Sr., was going  to Paris and, at Eleanor's request, was to stay at Alice's Avenue de Bois du Boulogne residence.[vii]
When Grace died in 1938, Eleanor was Alice Hoffman’s closest relative. Around that time, Eleanor writes a letter in which she firmly states that she cannot assume responsibility for any of her aunt's debts and has no interest in the North Carolina property. [viii] (The rest of this story is a subject for another post.)

Eleanor had become very close to the Roosevelts over the years. In fact, she and Ted built a house on the Roosevelts' Sagamore Hill property in Oyster Bay, New York. They had many friends of considerable stature all over the world, but were not people of exceptional wealth themselves.

As the years went on, Eleanor avidly pursued her interests in tapestry and photography, both of which won her recognition. Her coq d’or work is referenced in Erica Wilson’s Embroidery Book, published in 1973, and features a panel stitched with silk and gold on twill depicting a mythological scene of the golden cockerel being given to Dadon by an astrologer. Other pieces were more naturalistic but equally amazing for their precision, such as the one shown below. 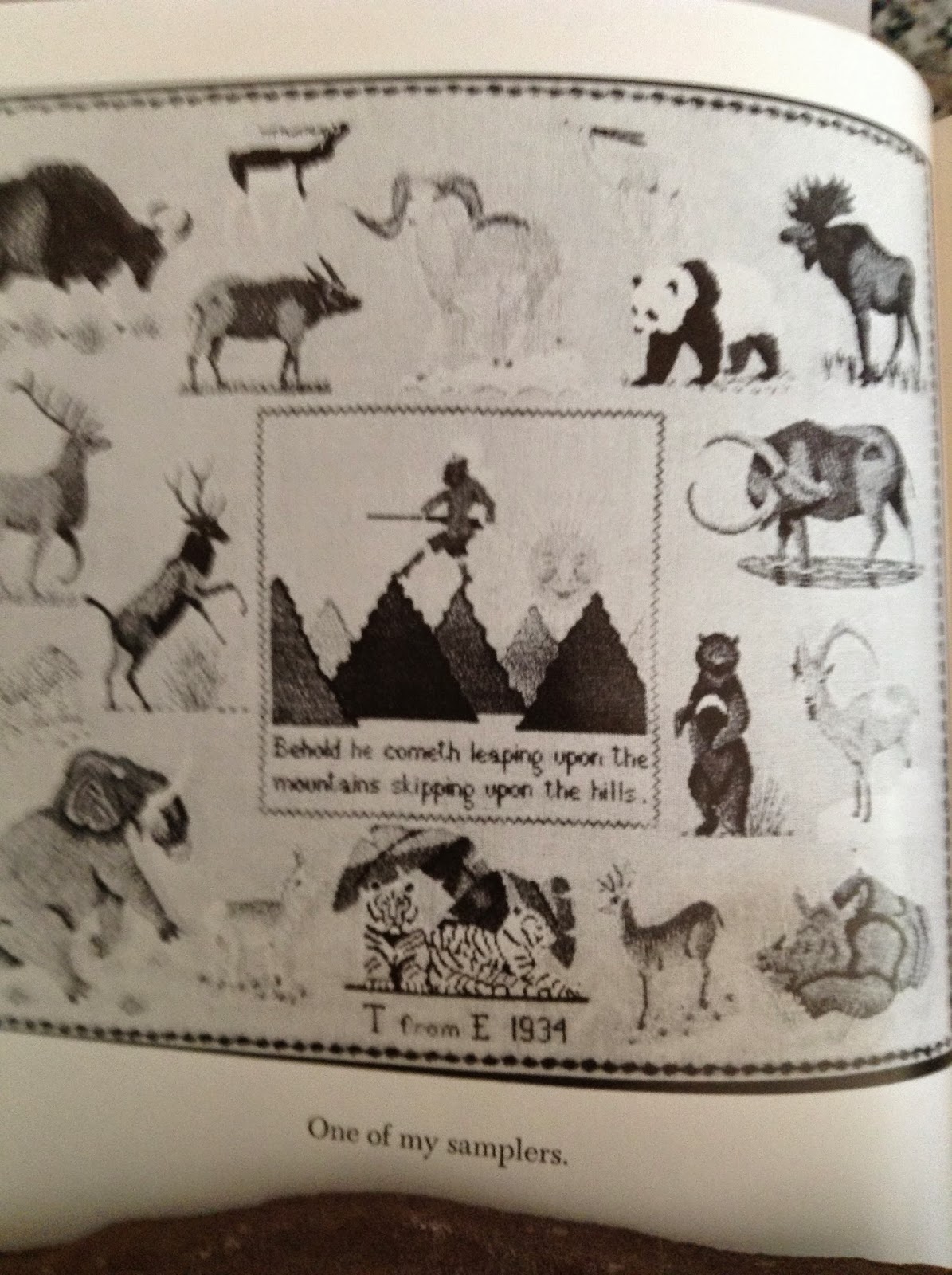 In this needlework, Eleanor depicted Ted’s wild game collection. Many of the animals he and his brother Kermit found and shot in Asia were preserved and donated to the Museum of Natural History. Eleanor and Kermit’s wife, Belle, also participated in some of the hunts.

She ends her memoir with Ted’s death from a heart attack in France in 1944 after participating in the D-Day invasion. Interestingly, that is the year Alice’s Bogue Banks property came under the control of Eleanor’s children even though Eleanor did not die until 1959, six years after her Aunt Alice. Eleanor lived out her life at the home the family called Old Orchard in Oyster Bay, New York.


[i] Roosevelt, Eleanor Butler Alexander. Day Before Yesterday, Doubleday & Company, Inc., Garden City, New York, 1959. All information and photos unless otherwise noted are from this source.

[ii] http://www.loc.gov/rr/print/coll/womphotoj/rooseveltessay.html
The Library of Congress Prints and Photographs Division