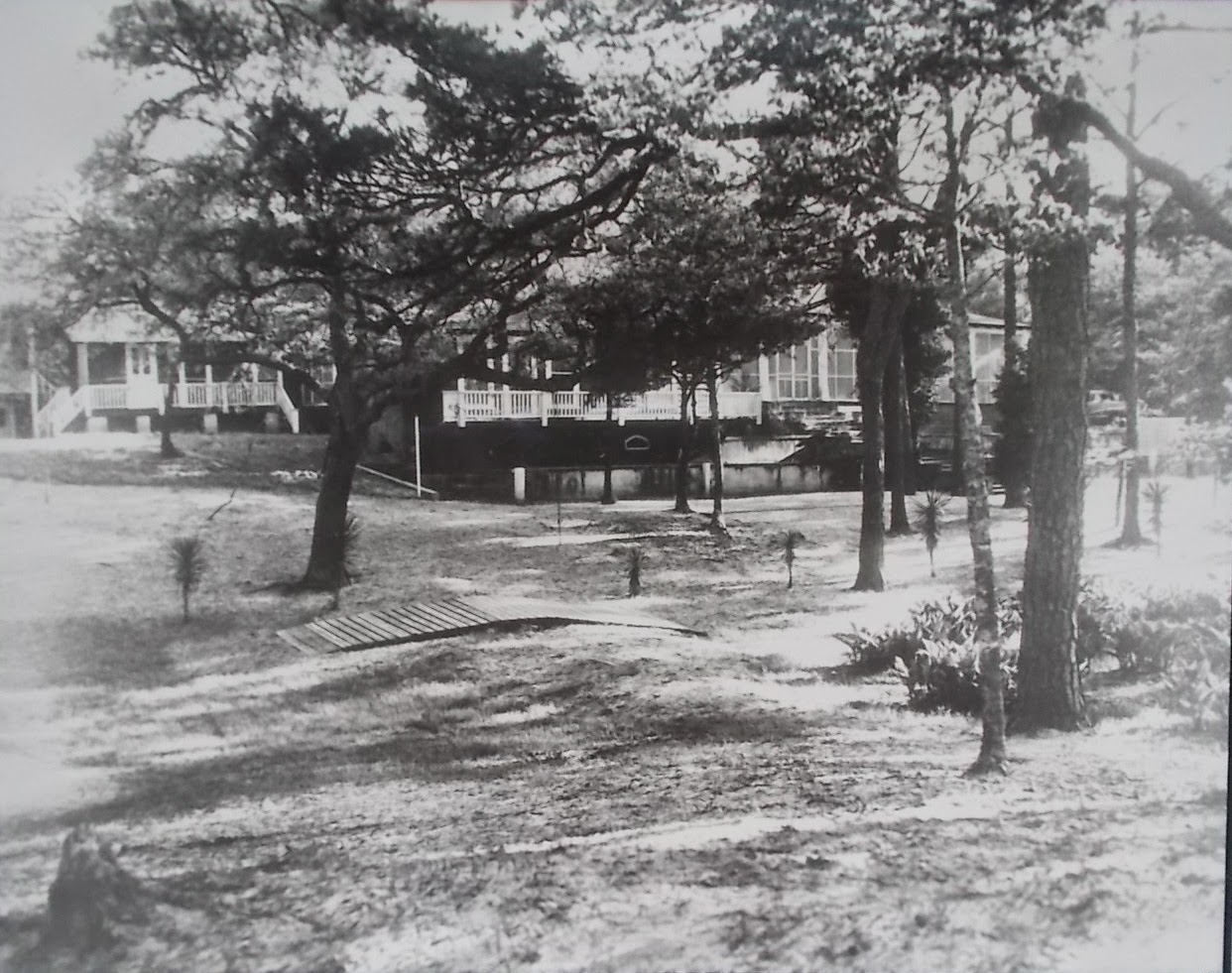 John Royall’s “Isle of Pines” estate underwent major changes after Alice Hoffman came on the scene. I use the phrase “came on the scene” because Alice requested and made changes before she purchased the property. When John Royall owned the land, the main house was his hunting lodge with a small cabin nearby for his friend Dr Allison to use. The first two years Alice was on Bogue Banks (1915 and 1916), she rented Dr Allison’s cabin and immediately started remodeling it to her liking. After she purchased the 2,000-acre estate from Mr. Royall, she continued to enlarge the cabin, and the hunting lodge eventually became just another worker’s cottage. This post shows how her homestead changed over time.

The position and relationship of the various structures, roads, canals and driveways shown in the charts below are based on aerial photos, insurance policies, correspondence from Alice, recorded speech by Don Brock as well as descriptions of the grounds by visitors when Royall was the owner and during Alice’s ownership. Locations of some of the outbuildings are the authors’ interpretation based on these sources.

1915 - As John Royall Used the Property. His lodge was approached from the sound using a cement and wood walk. Near the lodge was a well operated with a hand pump. Dr Allison’s cabin was a few hundred feet from the lodge. Dr Allison lived in Morehead City and used the cabin when he came to attend to the Royall family and at other times for relaxation or fishing. John Royall had extensive trails cut and maintained on the property, including several routes to the ocean-side teahouse. The faint dashed lines on the graphic below mark the location of current roads and canal. 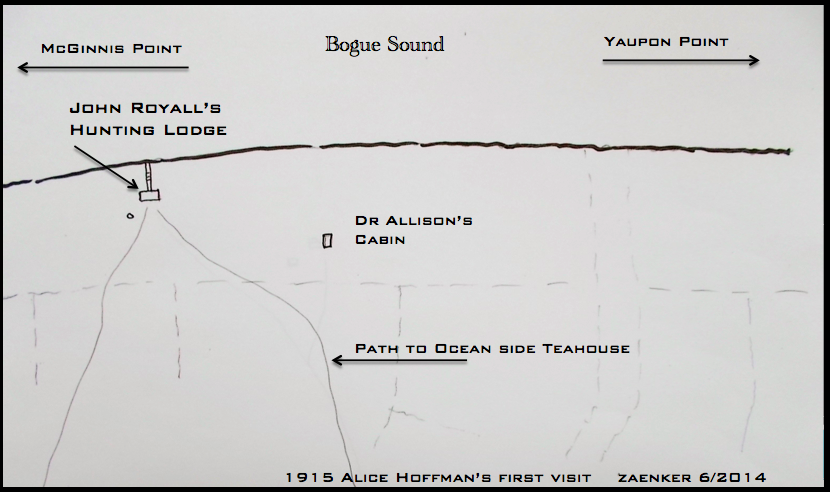 1917 at the Time Alice Purchased the Estate. Before Alice rented the cabin, she had required Royall to make some changes and then made other changes herself. (See post entitled “Kitchen, Food, and Drink” for details of her remodeling the kitchen.) During the rental period, a well and pump were installed to serve the cabin and a bathroom and sun parlor were added. 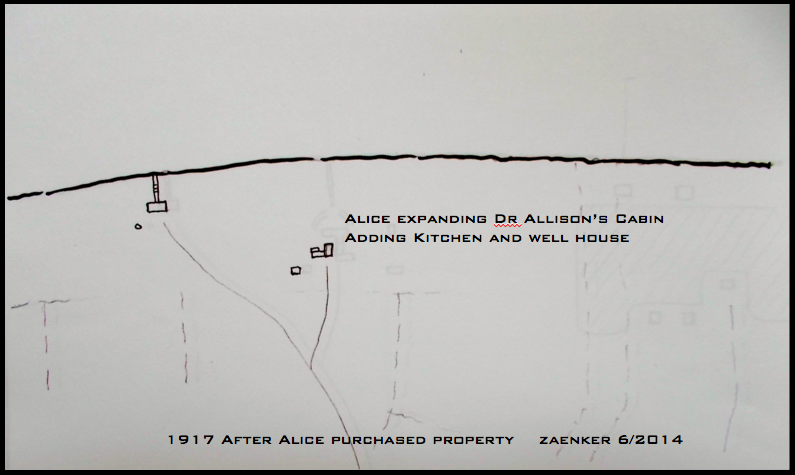 1927 Alice Hoffman’s Bogue Banks Homestead at Its Peak. During Alice’s first decade of ownership, major changes and investments were made. Dr Allison’s little cabin grew to two stories in parts and included several large bedrooms, a dinning room, living room, library, gathering room, multiple cellars and exterior balconies. Cottages had been built for the gardener, forester, farm manager and cattleman. A number of sheds, garages, barns and other ancillary buildings were in use. A dock was built extending to deep water in the sound. Approximately 12 acres of land were cleared to the east of her greatly expanded house. We know she had at least two trucks on the property, and it is reasonable to expect some type of farm tractor. We also know dynamite was employed to remove stumps. All this construction was completed before a bridge from the mainland was built; all equipment and supplies came by boat. 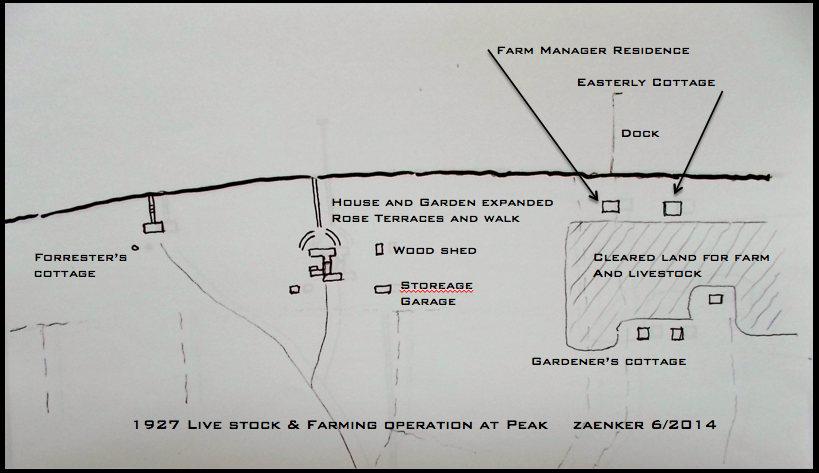 1945 Farm and Livestock Operation in Decline. By this time, the only farm and animals on the property were for consumption onsite. The business operations had stopped. The long dock out in front of the farm manager’s house was lost in a storm, and a new dock built in front of Alice’s house, with a small gazebo at the end. Nature was beginning to reclaim the edges of the cleared area. The year before, 1944, an improved road had been extended from Atlantic Beach to the community of Salter Path. Alice had a straight driveway constructed to her house. (This driveway is clearly visible in 1953 aerial photographs.) 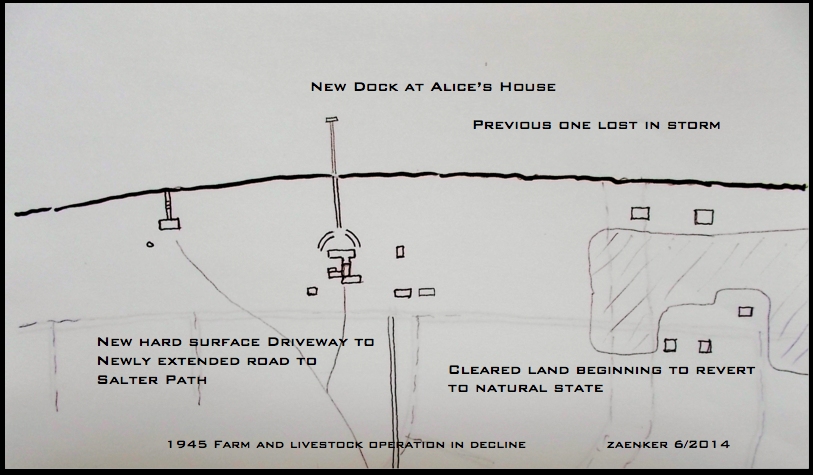 1953 Alice Hoffman Dies in Her Home. The chart below shows the Hoffman homestead when she died. Many of the outbuildings had not been used for years and were probably in disrepair. The current road and canal locations are shown to provide a reference. 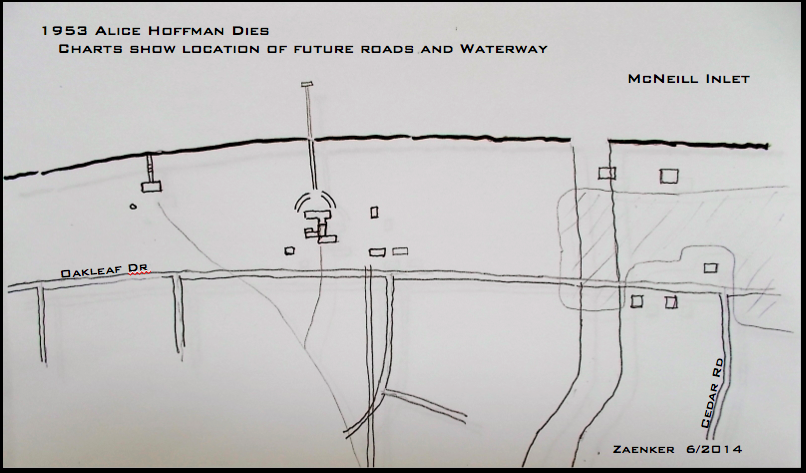 A recent conversation I had with an individual whose family has been coming to Bogue Banks since the early 1950s inevitably got around to the subject of Alice Hoffman. He told of the time he and his Dad in 1954 drove past the “No Trespassing” sign at the head of her driveway and went to see the house. He remembers it being big, sprawling, looking as though it had been added onto many times. He said it was painted a deep forest-green and blended into the surroundings. What made him remember that visit so clearly is that, after being there for a short time, there were shots fired to encourage them to leave.

Several years after Alice died, most of the structures were demolished, sold at auction or dismantled, the lumber being reused elsewhere. One portion of her house was relocated to Salter Path Road and used as an early development headquarters and real estate office. Other parts were auctioned off and moved to Morehead City. (See post entitled “A Tale of Two Houses” for more of this story.)

The tale and trail of a portion of Alice Hoffman’s home are sketched out below: