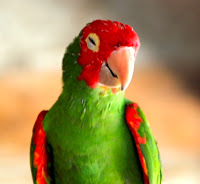 Alice Hoffman had people around her at all times. She had a live-in assistant, secretary, maid, cook, and other support staff with her at her homes in New York, Paris and Bogue Banks. They also accompanied her on travels by car, train, or steamship. Whether at home or abroad or on a trip, she also often had her favorite pistol and a parrot named Polly. 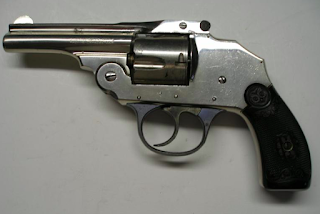 An Iver-Johnson pistol was listed in an inventory of personal possessions dated 1917. She mentions in her unpublished autobiography[i] in a chapter discussing living on Bogue Banks, “I have a pistol on each side of my bed, and should not hesitate to use them both, if any one made the attempt to molest me.” 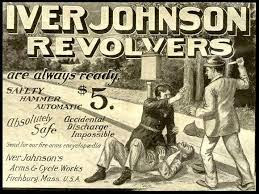 Mention of the pistols again comes up in a chapter about her trip to Japan and China in 1924-1925. Upon disembarking at Kobe after a three-week voyage from Seattle, the Japanese authorities confiscated her weapon.

Several weeks later when she left Japan for China, her pistol was returned. After six days at sea, she arrived in Tientsin (Tianjin) China and proceeded by rail to Peking (Beijing). Her arrival in China was simple compared to Japan. “We simply walked off of the boat, without incurring the smallest hindrance…no one making the slightest effort to examine our effects!”

Never one to make life easy or unencumbered, she was accompanied on the Asian trip, that covered a period of nearly six months, by her usual entourage as well as her parrot Polly. Polly had her own traveling cage and associated supplies. On some portions of her journeys, by rail or ship, Polly was welcomed and accommodated without a fuss, other times not so. 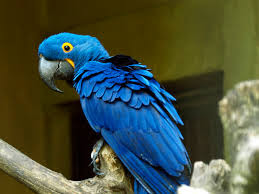 Even though Polly is mentioned in several places in Alice Hoffman’s autobiography, including a chapter devoted to the bird, no description or type of parrot is included. Pictured here are large (above) and small (below) examples of the species.

On one particular leg of the trip she was unable to persuade the conductor, whether by word or other inducements, to allow Polly to travel in the passenger car. After that experience, Alice wrote,
“I decided that nothing would induce me to allow her travel in the baggage car again.” On a train trip in Japan, she hid Polly behind the train engineer’s compartment door, and when approached by authorities inquiring about a reported bird, she “assumed the most innocent expression…and appeared as unconcerned as possible.” After the authorities left and the train left the station, Polly came out from her hiding place and entertained the whole car with witty comments on the trip.”

Polly caused issues in Europe also. Alice reported that Polly developed an extensive vocabulary, both English and French. She tells of a journey in Europe, “as I was boarding the steamer, Polly’s exuberance of spirits attracted the attention of the steward who was guarding the gangway and who insisted that Polly must have a ticket. This cost me $5.00!!”

When Alice lived in Paris, she had a French chef in her employ who was fond of the parrot and taught it many French phrases, which Polly used at times whether appropriate or not.

While Alice was living in her apartment on 57th Street in Manhattan, Polly escaped out an open window. “I was walking through the hall which lay between the dining room and drawing room with Polly on my shoulder when she dashed.” Alice alerted building managers in a two-block area. Polly roosted on a windowsill a day later and was returned to the Hoffman residence. 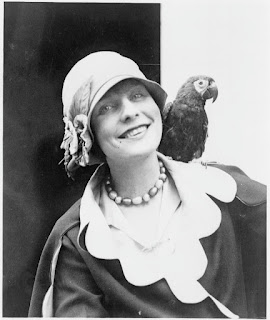 From Alice’s autobiography, we can piece together a timeline that indicates Polly was a part of Alice’s life from the early 1910s (after Alice’s divorce) to the late 1930s, perhaps longer. Parrots have a lifespan of 50 to 95 years. Being aware of this fact caused Alice to give due consideration as to who to leave Polly to in her will. “I had a good deal of anxiety in deciding whom to leave her to when I made my will.” Before those conditions came to pass, Polly died on Bogue Banks, after an illness of unknown origin or name.