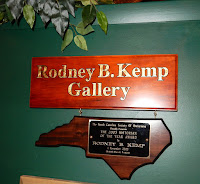 “This is a big night for the Carteret County Historical Society and for Pine Knoll Shores,” said Michelle Powers, an active member of the PKS History Committee and vice-president of the Historical Society Board. She was speaking at the March 11 dedication of the new Rodney Kemp Gallery in the former History Place and the formal opening of the gallery’s first exhibit, “Beach Town in a Forest: The Story of Pine Knoll Shores.” Approximately 145 invited guests were in attendance.

A reception, with a delectable display of food and drink, greeted guests in the museum’s auditorium. President of the Historical Society Board Jim Buckingham welcomed everyone and introduced the museum’s executive director, Steve Anderson. Steve humorously and graphically described the often-hectic museum renovation process, thanking all of his volunteers and presenting recognition awards. Among those recognized were Jim Buckingham and board member Herb Stanford. Steve then introduced Michelle Powers, who expressed her delight at the results of all the hard work that went into enlarging and remodeling the gallery and into the exhibit. She had Mayor Ken Jones, PKS commissioners and members of the History Committee join her on stage and presented an award to the town for being first to exhibit in the new Rodney Kemp Gallery. After accepting the award, the mayor said a few words, expressing how pleased he was with this opportunity for Pine Knoll Shores, how amazed he was at how much work was done in a short period of time, and how happy he was with the exhibit. 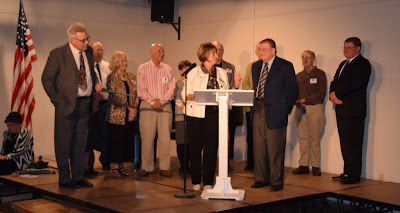 A virtual ribbon-cutting followed, officially opening the exhibit with Steve and Walt Zaenker, PKS History Committee chair, each holding the ribbon and Rodney Kemp cutting it. With the gallery officially opened, Michelle invited guests in groups of about 20 to go through the exhibit while others remained in the auditorium, where a series of amazing photos of Pine Knoll Shores by committee member Bill Flexman served as backdrop. 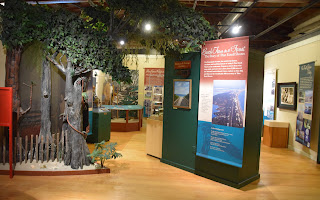 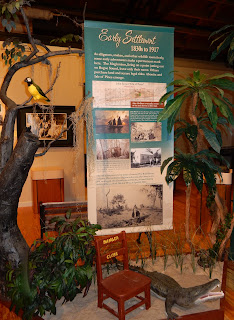 With realistic trees, greenery and sand echoing the theme of “Beach Town in a Forest,” the exhibit features seven colorful 3’x7’ panels, against a rich palette of deep green and warm beige wall colors. The panels with brief text and vivid images introduce each part of the Pine Knoll Shores story: “Early Peoples and Exploration,” “Early Settlers,” “Alice Green Hoffman,” “World War II,” “The Roosevelt Legacy” and “Pine Knoll Shores Today.” Finely crafted museum cases contain artifacts related to and expanding on these main subjects. Floor objects include a realistic alligator, a manikin outfitted as Alice Hoffman often dressed on Bogue Banks and steamer trunks like those she used on her many ocean voyages. A collection of PKS artifacts puts the town’s spirit of volunteerism on display. A touchscreen at the end of the exhibit offers visitors more of the town’s history.

I spoke with Rodney Kemp after he had gone through the exhibit, and he was delighted with it. The word he carefully selected was “Exquisite.” That response was reflected over and over with expressions such as: “Wow!” “Awesome!” “Love the alligator and all the photos.” “Amazing that a small, relatively new town could do this.” “Need to come back when there is more time to ponder and explore the touchscreen.”

Following this formal opening, the exhibit had a public opening on March 15 with some enhancing additions. You may visit and revisit for one year, until March 15, 2017. The museum is at 1008 Arendell Street in Morehead City, and parking is in the rear. It is open Tuesday through Friday from 10 a.m. to 4 p.m. and the first Saturday of each month. For more museum information, call 247-7533.

Pine Knoll Shores residents and their guests get one free visit with a pass printed in this issue of The Shoreline. Otherwise, the museum entrance fee is $3 for adults.