John A. Royall: Isle of Pines 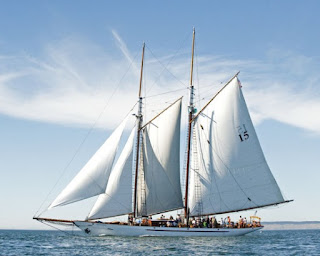 Before there was a Pine Knoll Shores and before Alice Hoffman set foot on Bogue Banks, John A. Royall and his family lived here. He owned from Hoop Pole Creek to the western tip of the island. Royall or Royal is a rather common name, so it’s not easy finding the exact John A. Royall we are looking for, but we think we have traced him.

1915 Schooner built in Boothbay, Maine, similar to one owned by John A. Royall. [i]

We believe he is the John Allan Royall who was born in Savannah, Georgia, on November 1860 and who died March 13, 1959. If we are right, he married Agatha C. Freeman in 1899 in Philadelphia.[ii] He and his wife Agatha, who was born in 1872 and died in 1945, are buried side by side in Savannah. They had four children: Virginia Inness-Brown, John A., Jr., William, and Robinson.

For their wedding trip, it seems they took the steamship Portia, a 220-foot vessel carrying 71 passengers and a crew of 71. It left New York City on July 8, 1899, and sunk off the coast of Halifax, Nova Scotia. Luckily for us, he and Agatha survived.

In 1898, he bought a summer residence in Boothbay Harbor, Maine. In 1929, he and Agatha made Maine their permanent residence.[iii]

John A. Royall was a successful businessman. We know he worked in Boston with lighting oil, gasoline and other materials. He was an executive of New England Oil Company. By 1911, he considered himself retired. At least, that is what he listed on a ship’s manifest for travel to Bermuda. 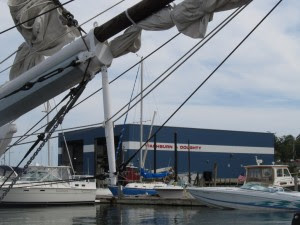 Lloyd of London’s Yacht Listing shows that he owned a 53-foot wood-hull schooner named Virginia with a three-cylinder gas engine. The yacht was built by Rice Brothers in East Boothbay, Maine, in 1903, and sold in 1918 to Daniel H. Grandin for use on Lake Chautauqua in New York. [v]

When Did John A. Royall Come to Bogue Banks?

We are not sure exactly when he first came here, but believe it must have been when he owned the yacht “Virginia.” We assume he was sailing south, perhaps just exploring the coast or looking for a warmer winter residence than Booth Bay, Maine. He was, after all, a southerner by birth. We know for certain he started to buy land on Bogue Banks in 1910, perhaps as an investment, health retreat, winter residence, or
simply a good location for a hunting/fishing cabin.

An article, written by Martin V.B. Ives, confirms some of what we know. 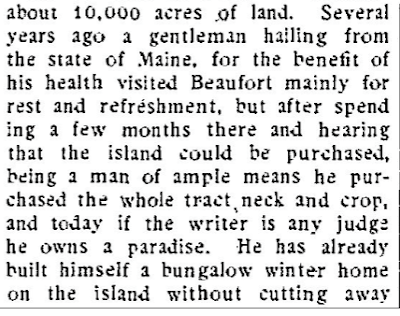 Eventually, he acquired 4/5ths of Bogue Banks. In today’s measurements, he

bought from Mile Marker 5 to the western end of the island, approximately 8,000 acres. This land was purchased in several parcels from a number of owners, including the families Taylor, Midyette, Lewis, Garner, Smith, Colburn and Styron as well as from the Eastern Carolina Land & Lumber Co.

Within Royall's 8,000 acres there were scattered parcels held by others. The largest was 82 acres bought by Oscar Kissam in 1908. Mr. Kissam subdivided the property and sold lots to neighbors from his hometown of Huntington, New York. A few of those lot owners built cabins as winter retreats. This development, called Abonita, was near the location that John Royall selected for his retreat home. The Royalls and the Abonita families were neighbors. The photograph below taken on Bogue Banks in 1912 includes Mr. and Mrs Royall. The white haired gentleman on the left is John Royall and his wife is in front. 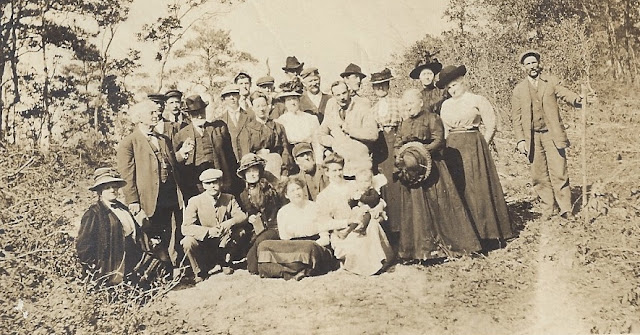 When Did Alice Hoffman Meet Him and What Were Her Impresssions?

Alice Hoffman’s unpublished autobiography provides multiple versions of her early visits to Bogue Banks but, nonetheless, gives us insight on John Royall the man and the way he and his family lived on Bogue Banks.[vii] In August 1915, at the age of 53, Alice Green Hoffman, was in Beaufort to see Mrs. Gilman Perkins’s estate advertised as “A Paradise of a Home.” Confirming that the advertised property was not for her, Alice made a trip by water to “Mr.Royall’s ‘Isle of pines,’ as it was then called.” She describes what she saw when she arrived at Mr. Royall’s dock:

The path up to the house was guarded on each side by a sort of rampart of cement, & between these barriers the general incline was divided into low steps of the cement in its natural colour combined with ordinary 6x4s painted the most divine shade of green which harmonised to perfection, with the forest of pine trees all about.”

John Royall, who was 55 at this time and of a similar social standing, made a favorable first impression on Alice. He was a perfect host and took her for a walk over to the ocean where he had built a “Teahouse.” We later learn in the autobiography that Royall had “alleys” cut through the maritime forest and his caretaker maintained about “12 miles” of pathway.

The day after her first visit, Alice invited Mr. and Mrs. Royall to lunch in Beaufort. To Alice’s surprise, he arrived alone. Having been impressed with the Isle of Pines, Alice did her best to charm him, and he invited her back to lunch with him and his wife on the island. When she asked if he “...would consider selling any portion of this magic island,” she says, “He flushed very easily,” so she could “see at once that he was interested.”

When she later decided to rent before making a decision about buying, he agreed, at her request, to remodel a cottage he had had built near his own sound-side house for a physician friend. He would “put in running water & a bath-room.” He also added a sun parlor and provided a sheet iron stove for her kitchen. She sent other furnishings from New York City. Given the improvements he had made, Alice fears he was disappointed when she brought in another contractor to do more remodeling, but is impressed that Royall did his best to conceal his feelings.

When she returned to NC to take up temporary residence at her island home, she was delighted when she received his telegraph, saying her furniture was all in place, her servants had arrived....” She goes on to say, “I must say I think it was noble of him, for he had children, friends, governess, and last but not least a wife.” These rather remarks tell a lot about Alice and about the Royalls’ style of living.

Although Alice was impressed with John Royall and his island paradise, she was less impressed with his speedboat even though by the estimation of others “it outdistanced everything on the Sound.” She thought it was “a most commonplace little craft” and found its outboard motor unpleasant.

Alice speaks with pride about her ability to attract men, and at one point in her autobiography, says she heard that “his wife was jealous.” Alice believed that such gossip was absurd given her advanced age, but takes the first opportunity to invite Mrs. Royall over with her husband and reassures her. “From then on we were perfectly good friends again.”

Alice’s description of the Royall family is as follows:

Mr. and Mrs. Royall were very charming neighbours, and their little daughter of sixteen was an exquisitely beautiful creature. The boys I saw little of, and as a matter of fact Virginia was in boarding school, so that I saw her only once or twice.

We know John Royall and his family did not stay on Bogue Banks year round because Alice says he, on one occasion when leaving for the north, stopped by and asked her to buy the property and accepted an offer of $45,000. There are various versions of this part of the story, so it may not have happened exactly this way. She also does not describe her purchase, but we know from deeds that she ended up owning from Hoop Pole Creek to a mile beyond the western border of the village of Salter Path.

After making the offer to purchase, she says, “In the following autumn, I met Mr. Royall in New York & drew up the necessary papers, leaving the title as well as the various notes in escrow.” This was probably 1918, but she did not for some years have the money to pay for the land outright.

On at least one occasion, Alice admits Royall grew inpatient when she missed a payment and threatened to force her to pay for a boat he had to hire to contact heron Bogue Banks for the money. Alice seems to have resolved this issue, and the overall impression she gives of John Royall and his family is positive.

However, court records and letters in the Joyner Collection at East Carolina University reveal their relationship ended badly. Either for that reason and/or because Alice was in debt, Royall sold his land west of Salter Path to Henry K. Fort of Philadelphia.

What Happened After the Sale of His Bogue Banks Property?

He left Bogue Banks and, probably with money from the sale of property there, bought Standard Sand & Gravel in Lillington, North Carolina. He is listed as owner in 1922 and became a member of the National Sand & Gravel Association’s Advisory Council.[viii] 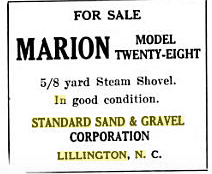 To the people of Pine Knoll Shores, John A. Royall is a founding father. He sowed seeds that grew into a town we think he would admire.

[i] Photo of  Rice Bros. Style Schooner: Adventuress was launched in 1913 from E. Boothbay, Maine. Photo by Will Litzler http://threesheetsnw.com/blog/2012/08/a-trip tomaine-in-search-of-adventuress-roots/


[i] The site of the former Rice Brothers Shipyard in E. Boothbay, Maine. Photo by Nina Collins - http://threesheetsnw.com/blog/2012/08/a-trip-to-maine-in-search-of-adventuress-roots/.

[ii] The following is also listed in “Shipbuilding History” under Rice Brothers, East Boothbay, Maine: http://www.shipbuildinghistory.com/history/shipyards/6yachtsmall/riceme.htm
Rice Brothers engine, their “Boothbay” gasoline engines (in production since 1903) were a popular choice and were included in their “20-Ft. Special” – touted as the “best boat and engine outfit ever offered for $275.” Like every solid business model, the Rice Brothers were flexible in what they could produce, responding to the changing market demand.