Pine Knoll Shores’ first Board of Commissioners selected the town’s first mayor in August 1973. Earlier that year, the first edition of “Shore-line,” a newsletter that became a monthly newspaper appeared. Much of what is known about the early mayors of Pine Knoll Shores comes from Shoreline issues, now available at ncdigital.com (The paper’s name is variously spelled, but this post will consistently use Shoreline). Other sources, including interviews with family members and residents, add to the following history, which covers years when elected Boards of Commissioners selected mayors from their membership, a practice that continued until 2003. 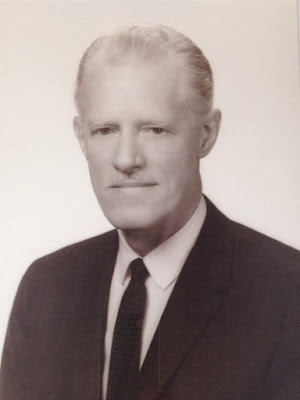 On August 1, 1973, Pine Knoll Shores voted to incorporate as a town although it had to wait until 1974 to get official state recognition. The August 1973 Shoreline reported 146 of the town’s 161 registered voters took part in making the decision: 120 were for and 26 were against. In addition to voting for incorporation, residents elected, from a slate of 16 candidates, the town’s first Board of Commissioners—Jim Ramsey, Ruth Bray, Bill Doll, Waightsel Hicks, H.W. McBride and Jim Redfield. Shoreline editors Mary Doll and Betty Hammon proudly concluded: “The newly elected commissioners come from varied backgrounds and from all corners and shores of PKS.” (Of course, in 1973, nothing much was developed west of today’s Pine Knoll Blvd.)

At their first board meeting, commissioners selected Jim Redfield to be the first mayor. He would preside over Board of Commissioner meetings and be the town’s primary spokesperson for one two-year term. Redfield was a member of Pine Knoll Association (PKA), the only homeowner association in town in 1973 and, as such, Pine Knoll Shores primary governing body prior to the town’s incorporation.

Why he was selected may be explained by the August 1973 Shoreline, which provided the following personal profile:
JIM REDFIELD is a retired consultant to top managements of major corporations, providing counsel in general management, organization, long-range planning, and marketing. His 30 years experience in this field will be of much value to him in his new role as mayor. Jim has a BA from the University of Cincinnati. He and his wife, Carol, lived in New York just prior to coming to PKS about a year and a half ago. They are both eager fisher-people, photographers, and musicians, but their great love is gardening, and their garden is glorious, both to the eye and to the palate. Jim and Carol have a son, James, Jr., who lives in California.

In 1986, when the Redfields left Pine Knoll Shores to live near their son, the Shoreline added additional details. They had come from Bronxville, New York, and Jim had been a consultant with Cresap, McCormick and Paget, Inc.

We also learn that commercial and development interests had been working against Pine Knoll Shores’ incorporation, and Jim Redfield was one of the town leaders strongly supporting an “incorporated village.”

Many issues to come before the Board of Commissioners and Mayor Redfield were basic to the town’s formation. Together they wrote ordinances that would both reflect and determine the values, growth patterns, and character of Pine Knoll Shores; created a Planning Board and Board of Adjustment; established a partnership with Atlantic Beach for fire protection; supported major ventures such as a proposal for a marine resource center, which would become a state aquarium; and formalized important volunteer organizations, such as the Garden Club.

Other issues to come before commissioners during Redfield’s term of office were more mundane, like street lighting or speeding in the canals; and some would remain issues long Redfield left office, such as proposals for a third bridge from Morehead City to Bogue Banks.

From an historical perspective, perhaps Redfield’s biggest accomplishment as mayor was the fight in Raleigh for recognition of the town’s incorporation. It was on April 11, 1974, that he announced, “We Are a Town!” The Shoreline provided this comment: “Jim Redfield’s hours of anguished devotion to the cause were at last rewarded.”

Appropriately, on September 7, 1974, with two state legislators present, Jim Redfield presided over dedication of the first town hall, which was a small building that had been the kitchen area of Alice Hoffman’s house. (For a history of this building, see “A House Where Alice Lived” on the pineknollhistory. blogspot site.” 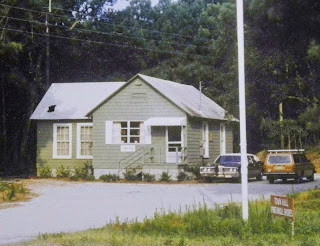 Kitchen area of Alice's Hoffman's Bogue Banks home, moved from Yaupon and Salter Path Road, where it was a property management office, to municipal property. It served as the first PKS town hall.

Jim Redfield, like future mayors, cared deeply about Pine Knoll Shores, wanted to preserve much of what was here but also had a vision for the future and was willing to enter the fray to fight, when necessary, for what he envisioned whether that fight was in Pine Knoll Shores, Carteret County, or the state. The May 1974 Shoreline concluded: “Jim Redfield, as Mayor, has had literally a full time job and many times a hard and demanding one....” — an assessment that may explain why he chose not to consider a second term.

Additional research has indicated that James Winston Redfield, Sr., born March 7, 1906, died at age 91 in California on February 24, 1998, outliving his wife Carolyn (“Carol”) by about a year.