Continuing the series on Pine Knoll Shores’ mayors who were selected
by the Board of Commissioners, this post on Wayne Cleveland draws
most of its information from back Shoreline issues. 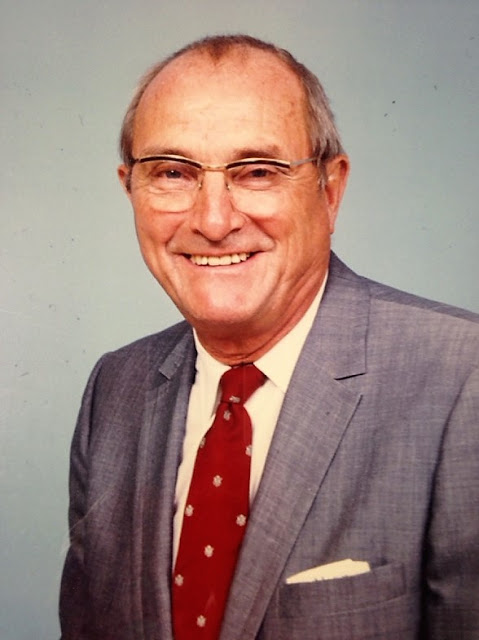 Wayne Cleveland’s road to becoming Pine Knoll Shores’ third mayor began in an unconventional way. In October 1976, he was appointed to fill a Board of Commissioners’ vacant seat resulting from the death of Commissioner Jim Ramsey.
In November 1977, Cleveland ran for the office and was elected to the Board,
winning 136 of 244 votes. (Only 74% of registered voters had cast ballots.) In
April 1980, commissioners unanimously selected him to complete the term of
Mayor Ken Haller, who had resigned for health reasons. In November 1981,
Cleveland ran again for the Board of Commissioners, won and was reappointed
by the Board as mayor. Unfortunately, he would not serve out his term.

Unlike with the past two mayors, no Shoreline issue provided a biographical note on
Wayne Cleveland, but the 1940 Census listed him as living with his wife, Karolyn,
and two children in Marion, Indiana. At the time, he was working as a “merchandise
clerk” for a Power & Light Company. Later, he became a salesman of paper products.

His son, Paul and the grandchildren provided additional biographical information, indicating that Wayne was born June 24,1910, in Marion; In 1932, he married his
childhood sweetheart, Karolyn Meyer and moved with her and their two sons to
Atlanta in 1943. There he began a successful sales career in the paper and fiber
industry. In 1956, the family moved to New York City, where Wayne worked with
Keyes Fibre (now Huhtamaki), becoming vice-president for sales and serving as
president of the Single Service Institute, a trade industry group. Upon his retirement
in 1973, Wayne and Karolyn came to Pine Knoll Shores, where they lived at 228
Oakleaf Drive. He was about 70 years old when he became mayor. 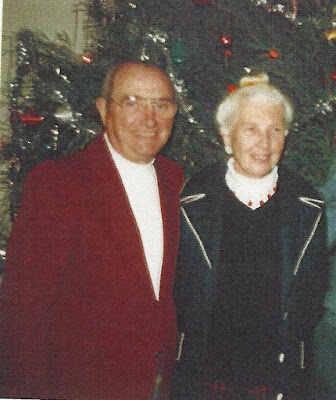 From PKS album, photo provided by Susan Phillips  of Wayne and Karolyn Cleveland.

A Raleigh News & Observer article reveals that when the Clevelands lived in
Manhattan, on the banks of the East River, they used their cabin cruiser to shuttle
visitors to the 1964 New York World’s Fair. This article provides an interesting
insight on why they may have chosen coastal living for their retirement and on the
spirit of volunteerism they brought with them to Pine Knoll Shores.

Wayne Cleveland came to his commissioner and mayoral posts with valuable local experience. When first appointed to the Board of Commissioners, he was serving on
the town’s Planning Board. He also was on the PKA homeowner association’s
Architectural Control Committee and had helped organize the town’s volunteer
rescue squad.

In 1980, when Cleveland became mayor, the town boasted a peak population of
3,400; however, its full-time population was only 750. There were 1,103
single-family lots with only 357 houses built. Anticipating 1,700 condominium units
with only 280 completed, the town had a considerable amount of growing yet to do.

During his first months in office, Mayor Cleveland, commissioners and the Planning
Board worked on a CAMA Land Use proposal. On January 6, 1981, the
announcement was made that the plan had been accepted, but updates continued, so approval of the final plan was delayed until later that year.

Working on local, county, state and national levels, Cleveland sought to give Pine
Knoll Shores its own mailing address rather than remaining a rural route out of
Morehead City. He also rejected the option of the town’s being a rural route out of
Salter Path. The address change was not a new issue, and as with most changes in
town, it was not without local critics, but Cleveland thought a local mailing address
would help assert Pine Knoll Shores’ independent identity as a town. Not until
October 20, 1990, could mail be addressed to Pine Knoll Shores 28512.

Mayor Cleveland rejected Carteret County’s proposed “201 Sewer System Plan,”
opting for the town to remain on septic systems. He believed the county’s plan would
not allow for population growth in Pine Knoll Shores. However, the Roosevelt
Interests supported the plan and, when it failed, decided to install a sewer system for Beacon’s Reach.

Cleveland demonstrated the ability to be a forward-thinking leader in many ways, but others did not always follow. For example, he appointed a study group to consider
getting the town its first computer. In the early 1980s, IBM had joined with Microsoft
to begin making desktop computers. The purchase of the town’s first computer was
approved in 1985, about two years after Wayne Cleveland died.

Unfortunately, without the prospect of being able to sell and serve alcoholic
beverages, motel owners’ worries about the zoning amendment limiting new
construction in Pine Knoll Shores to eight living units per acre led to the town’s first lawsuit. John Yancey Corporation filed the suit because it limited the Yancey’s plans
for expansion, but all motel owners in town saw the amendment as a threat since it
meant they could not rebuild if disaster struck.

Development was always a thorny issue in Pine Knoll Shores. Another 1981 example
had to do with what some saw as unsightly commercial development at the corner of Oakleaf Drive and Salter Path Road. A related “appearance” controversy involved
disputes over signage. Mayor Cleveland presided over public hearings so residents
could air concerns, but resolutions to conflict were difficult to achieve.

While a proposal for a bridge across the canal between Ramsey Drive and
Mimosa Boulevard  was on the table, there also were lingering issues concerning
a third bridge to Morehead City, a shopping center in Pine Knoll Shores and
drainage problems in the eastern part of town. None of these were resolved during
Wayne Cleveland’s time in office.

However, other changes were taking place. A Carteret County branch library opened
in the new marine center, and multi-family residential units were bringing more
second-homeowners to Pine Knoll Shores. Despite controversial public hearings on
development with renewed threats of a moratorium on condominiums, Beacon’s
Reach and McGinnis Point were in progress.

Also, after years of study and debate, Pine Knoll Shores, in 1983, annexed property,
west of Beacon’s Reach, between the Trinity Center and Indian Beach. The July
Shoreline contained Mayor Cleveland’s “warm welcome” to the town’s new residents:
“We are sure you will find living just a little bit better by being part of our controlled developing beautiful town.”

When off duty, Wayne Cleveland was a member of the Ancient Mariners bowling
team and active in the Presbyterian Church. Unlike Mayor Ken Haller, he seems not
to have been a fisherman, but in addition to bowling, he played golf and tennis.
Family members tell us Wayne and Karolyn took late afternoon walks to the beach almost every day, often enjoying drinks with friends at the PKA “sittum.”

Before becoming mayor, Wayne Cleveland had been an active member of Pine
Knoll Shores Golf and Country Club, where he served on the Board of Directors.
In 1975, when the club went into foreclosure, he became chair of Bogue Banks
Country Club, Inc. On its behalf, he made the bid to buy the club at auction for
$639,000 and, then, was selected to serve as the newly organized club’s first
president.  (For more about this story, see “Country Club” post by Ted Lindblad
on the PKS history blog.) 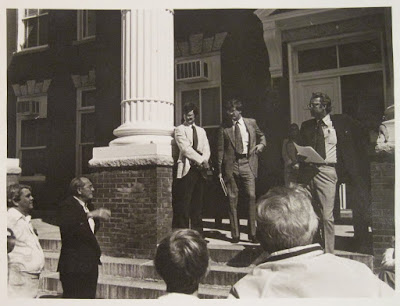 The above photo of the auction at the Carteret County Courthouse, showing Wayne Cleveland (second from left) in the audience bidding for the Country Club, originally appeared in the Carteret News Times.

We do not know much else about Cleveland’s activities outside city government. As mayor, like Ken Haller, he did represent Pine Knoll Shores on the North Carolina League of Municipalities and on the Neuse River Council of Governments.

Wayne Cleveland’s health gave out while he was in office. The October 1983 Shoreline announced he was in Carteret General Hospital and offered well wishes. Unfortunately, he did not recover. Wayne Cleveland died November 18, 1983, at the age of 73. That month’s Shoreline began with a tribute:
...we will remember Wayne, the Mayor. He served our Town with devotion and ability for years and it may well be that he literally gave it his life. We will remember him as a Commissioner who worked long and hard toward making a reality of the dream of a new Town Hall. Many of us will remember him in his private life as a caring husband, father and grandfather. But most of us will remember him as a “friend”—and there is no better title....

Bill Dixson had just resigned as mayor pro-tem, so Jack Thompson assumed his role and presided over the Board of Commissioners until the newly elected Board could choose a mayor in December. Ironically, Ken Haller, whom Wayne Cleveland had replaced as mayor, was selected to serve again. However, Haller resigned in February 1985, and commissioners appointed Ken Hanan to complete Cleveland’s term as mayor.

We learn some specifics about Wayne Cleveland’s family from a November 18, 1983, Carteret News Times article: “He is survived by his wife Karolyn, two sons, Robert E. Cleveland of Cary and Paul D. Cleveland of New York City; a sister Wilma Bowers of Benton Harbor, Michigan; and four grandchildren.” Paul said his mother continued to live in Pine Knoll Shores for 10 years after his father died. She then moved to Cary’s Glenaire Retirement Community, where she lived an active life. Full of wit and good humor, Karolyn was known as “the Energizer Bunny.” She died in 2008, at the age of 97.

In May 1984, the town-hall fountain, which had been in planning stages during Wayne Cleveland’s last year in office, was dedicated to his memory. Generous donations of residents and the Pine Knoll Shores Garden Club made this memorial possible. 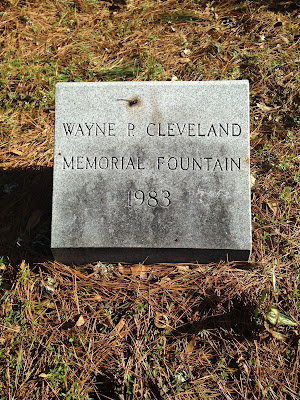 In the dedication, Mayor Ken Haller and Larry Jerome, a former commissioner, praised Cleveland’s service to the town. Jerome stated, “People like Wayne Cleveland made Pine Knoll Shores what it is today....” Wayne “...strove to make this town more beautiful...” and “would approve of the fountain and the pool that replaced a mosquito swamp...he would call it a job well done.”