“Bogue Banks is her name,
A not so ordinary island or name.”
To rephrase the lyrics of the David Gates song “Aubrey.”

There are a multitude of stories about the derivation, source and meaning of the name Bogue. Whether referencing local historians who share the stories told to them by their elders or searching works of learned scholars, you will find the answers less than definitive. Oh, yes, some will insist they know the truth, but with all the various tales told, it seems wise to remain a bit skeptical. A review of available literature and discussions with those who have also looked into this subject produced the following information.

Edward Moseley map 1737, first to use Bogue for inlet, sound and banks


Names for geographical features are typically made up of two parts. One part is a specific place identifier bestowed by the person naming the feature, and the other part is generic and represents the type or category of feature. The specific and generic can be presented in either sequence, e.g., Big Bear Lake or Lake Erie. The generic identifier often connotes a wide spread meaning while the specific carries with it a localized meaning.
The 1600s and 1700s are remembered as ages of discovery. Surveyors, naturalists and explorers travelled the world — collecting plants, animals and mineral specimens. Many also identified and charted geographical features, and along the way, named and classified them. Major formations were named in recognition of the Crown; (Carolina) significant features were named for members of the aristocracy (Carteret) or for those who funded the expedition; and lesser discoveries were left to the individual explorer or, more importantly, the mapmaker who first wrote the name on a piece of parchment.


Crucial players in the early history of Carolina were the Lord’s Proprietors. In 1663 King Charles II, formally granted the Province of Carolina to eight favored courtiers. Their purpose was to make the province useful and advantageous to his majesty and his subjects. Charting and mapping the lands was a key activity. Around this time the name Bogue first surfaced.
H. L. Mencken, in his study of American English, identified eight categories for the source of place names. They provide a checklist to consider in searching for the derivation of Bogue. Mencken’s categories are as follows:
Personal Names
The name Bogue is of Scottish and Irish origin, and the early settlers in North Carolina were mainly English and Scots that migrated from Virginia. An early mapmaker could have selected a name of a local settler. The earliest charts to use the name Bogue are from the late 1600s/early 1700s.  At that time Carteret Precinct was thinly populated; however, there was a William Bogue living in the Perquimans Precinct region, 75 miles to the north. One source said it was named for Josiah Bogue, who settled the area in the early 1700s, but he was born in Perquimans County in 1705. 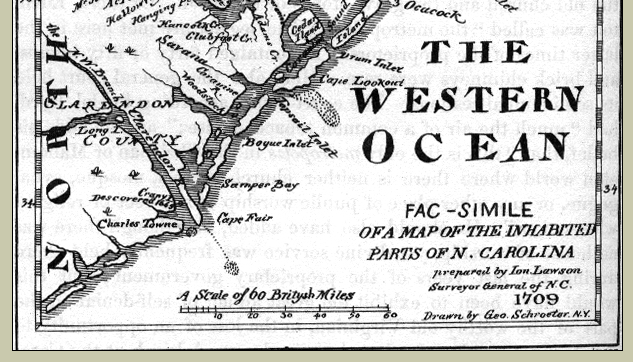 The map by Lawson named the inlet Bogue in 1709; clearly, this couldn’t have been named after some child that was not even in the area. In 1986, Hardy Zachary Bogue compiled a family history, and a copy is in the Carteret County Library Beaufort branch. Hardy was unable to identify a plausible link for the family name and the Banks, Sound or Inlet.
Some of the early work of the Lord’s Proprietors involved charting the land and waters of the province. Is it possible that a member of an early charting expedition was named Bogue and his name was used to identify a previously un-named inlet?

Names Transferred from England
The nearest name from the old world is “Bogs Bank,” a small hamlet 15 miles south of Edinburgh, Scotland. Is it possible an early settler emigrated from that town? Or, a member of an early expedition was from Bogs Bank, England, and bestowed that name as tribute to his home. This story has some appeal, except that the first appearance was spelled Bogue and applied to the inlet. Using that name for the island and the sound came later.

Indian Words
In the Choctaw language, "bogue" refers to a clear, swift stream with a sandy gravel bottom. But, there is no record of the Choctaw tribe residing east of Alabama, and the translation of old Indian place names is a mighty complicated business. Perhaps, natives whom explorers encounted referred to the island with a word that sounded like bogue, or the natives referred to themselves as bogue. That’s highly speculative, but not without merit. It is generally believed that Core Banks and Sound are so named due to the presence of the Coree Indian tribe.

Words from Other Language
In French, bogue means bug or glitch, but that maybe a modern use of the word, as in a computer software bug or glitch. In Spanish, it is said to be an archaic nautical term referring to a sailing vessel falling off from the wind. The Spanish were well established in Florida in the 1600s and made numerous exploratory voyages up the east coast. An early Spanish chart could have contained the name and later explores with access to such a chart could have just transferred the name.

Biblical and Mythological References
Nothing surfaced after a review of Bible and mythology ‘search’ sites on the Internet.

Descriptive Words
“Bogue” in the gulf states of Louisiana and Mississippi refers to a bayou, stream or waterway. The maker of the Lawson 1707 map would have had to been familiar with Louisiana dialect prior to visiting the Carolina coast. That usage of bogue is more of a generic descriptor and not a specific identifier.

Names of Flora, Fauna and Geology
Bogue is the common name of a species of sea bream (Boops boops), found in the eastern Atlantic Ocean and Mediterranean.

Another European fish (Box vulgaris), having a compressed body and bright colors, is also called a box or bogue. Perhaps the early European surveyor/map maker noticed a type of fish that resembled the bogue fish he was familiar with back home.

Fanciful Terms
A search of fantasy literature offered no clues. Could an early explorer been so creative as to just make-up a name?

What Can We Learn from Old Maps?
The name Bogue first appears on a map from 1709 by John Lawson. On this map, the name is applied to the inlet. The island and sound are left nameless.

Edward Moseley's 1737 map is the first to use Bogue for the inlet, sound and banks. A survey titled "The Greater Beaufort Area at 1800," completed by North Carolina State College, shows the place name of present-day Bogue Banks as Bordens Banks and the present-day inlet near Beaufort as Topsail Inlet. The name Bordens was based on William Borden who claimed ownership for a period in the 1830s. That name fell out of use well before the Civil War. Other than that period of a few decades in the early 1800s Bogue has consistently appeared as the accepted name. Several maps from the late 1700s show the island in two parts seperated by Cheeseman inlet located about four or five miles west of Beaufort Inlet, where the Foodlion is located today. That inlet closed in the early 1800s, but while it was open the eastern part was named Stanford Island and the larger western part retained the name Bogue.

It is well to keep in mind that charts and maps from the 1500s to 1700s were hand drawn and the property of the Crown. Few copies if any were made; they were highly valued and kept under lock and key. They were, however, susceptible to being destroyed by fire, being lost at sea, rotting or decaying. Some older charts do exist, but the shoreline they depict is vague, with features left un-named.


It’s highly likely that old charts that have not surfaced for historians to study contain clues to the source of the name. Until then, we are each left to speculate based on the evidence at hand. I lean to the explorer being thankful for having caught fish to feed the crew, which resembled the bogue they were familiar with from the Mediterranean, and named the inlet in its honor. What do you think?

Why the title Banks instead of island? see "Banks, Outer Banks"