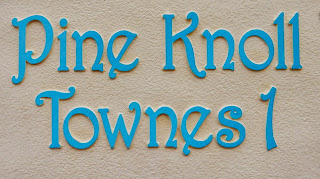 Parts I-III of “Homeowner Associations” focus on four of the largest: PKA, PIKSCO, Beacon’s Reach and McGinnis Point. The first two consist of all single-family homes, the latter two, a combination of single- and multiple-family dwellings. However, multi-family units began to appear earlier in Pine Knoll Shores, in the 1970s.

After completing the canals and the general layout of the PKA section of Pine Knoll Shores, the Roosevelts began to sell off property to developers whose buyers’ market was primarily in North Carolina and Virginia. The property was divided into relatively small parcels. Wanting to make the most of their investments and to appeal to the desire for vacation property without the burdens of home ownership, developers decided to construct multifamily complexes. One of the first was Pine Knoll Townes.

Map showing in black other HOAs that existed in 1972 when Pine Knoll Townes I and II first appeared.

Located just west of Dogwood Circle, Pine Knoll Townes developed in three phases, each with its own homeowner association, covenants, bylaws and board of directors—Pine Knoll Townes I and II in 1972 and Pine Knoll Townes III in 1976. Each building is similar in style—two-story mainly brick buildings with some siding, shingle and stucco features. The buildings are placed vertically on the lot from north to south—perpendicular to the ocean. 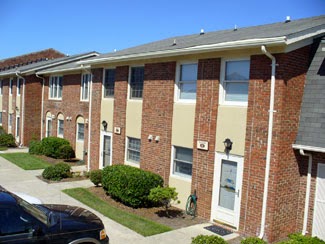 Balwade, Inc, with George R. Ballou as president and Iona S. Ballou as secretary, was the developer of Phases I and II. In the Declarations for construction, which appear May 10, 1972, Ballou indicated that each building would be 24,311 sq. feet and have 23 units.[i] According to a 1976 Shore Line newsletter, Beahaven, Inc., developed Pine Knoll Townes III.

Each Pine Knoll Townes unit is a two-bedroom townhouse with living room, kitchen and dining areas on the ground floor and bedrooms on the top floor. A paved driveway runs north to south, allowing residents to drive up to their townhouses. Each phase has two parallel sets of buildings. Each building has its own pool. Pine Knoll Townes I has its pool at the south end near the ocean and has a driveway between buildings; II and III have a grassy courtyard in the middle, where their pools are located. 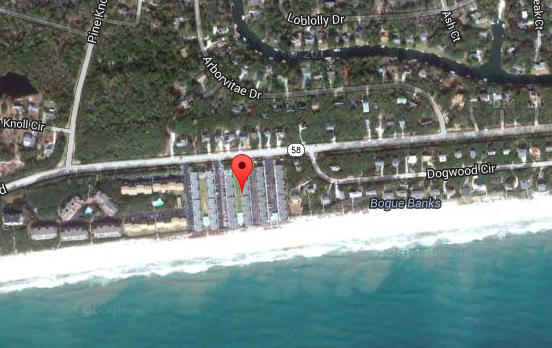 The homeowner associations hire property managers, who are responsible for general maintenance of the buildings and the grounds. During the early history, each HOA had its own property manager(s). As of this writing (2014), Atlantic Beach Realty, Inc., is the property manager for all three HOAs.

Some homeowners rent their townhouses on a weekly basis. Atlantic Beach Realty manages the rentals and, on occasion, the sales. It also provides housekeeping services for renters and, on request, for homeowners. The latter service is paid for directly by the homeowner.